Projecting up to a $65 million revenue shortfall without a football season, Arizona athletic director Dave Heeke says he’s considering “mitigation strategies” that include taking out loans, reducing staff and freezing capital projects — but not cutting any sports.

“Everything’s on the table right now,” Heeke said. “That exercise is in full force.”

On a Zoom media conference Friday, Heeke said the department’s “ballpark” projections forecast a revenue shortfall between $60 million and $65 million without football, or about two-thirds of his projected $94 million budget. Only some of that could also be offset via a possible spring football season, lower operating costs or favorable negotiations with Pac-12 media rights holders ESPN and Fox.

Already, Heeke said he has postponed capital projects while implementing a 10% budget cut for all sports programs and a 15% cut for administrative costs, in addition to the estimated $3 million to $4 million savings in staff salary reductions implemented last spring.

In prepandemic 2018-19, the most recent year that athletic department figures are available from the U.S. Department of Education, Arizona reported that $43.3 million of its $102.3 million in athletic department revenue came from football. Of that $43.3 million, roughly half comes from media rights, with along with other major sources such as ticket sales (16%) and sponsorships and royalties (10%), based on past UA filings with the NCAA.

While UA’s projected shortfall is roughly 50% more than what it reported for all football revenue in 2018-19, Heeke indicated there also would be collateral damage in some other areas.

“To be clear, this is somewhat fluid,” Heeke said. “We look at everything that impacts all of our revenue streams through the athletics program. It’s tickets, its contributions, direct revenue from the conference, additional sponsorship and marketing arrangements and agreements, our IMG deal — all of those packaged together.

“I just can’t throw a dart and get the number exactly, but we are modeling that if we don’t have football — if it is canceled completely — that we would see a revenue loss of between $60 million and $65 million.”

Heeke said he wasn’t sure how much having a spring football season would offset that figure, but it most likely would be significantly less than $60 million, since spring football could have fewer games and less interest from fans and television partners alike.

Navigate president Jeff Nelson, whose firm works with several major conferences on media rights strategies, said spring football revenue would depend largely on what kind of competition colleges would be up against.

“The fall is so perfect for football because people are starting to be indoors a little more and you’re really owning Saturdays,” Nelson said.

At the same time, UA was already making cuts. Athletic department staffers paralleled the universitywide pay cut and furlough program, with contracted head coaches voluntarily going along with it, saving an estimated $3 million to $4 million.

Heeke said he has also postponed all capital projects, while installing the budget cuts for sports and administrators.

In addition, UA has also implemented a hiring freeze for positions not directly involving athlete development. The UA was allowed, for instance, to hire former basketball star Jason Terry as an assistant coach for $280,000 annually.

“We’re being very intentional about the staffing size that we have, along with having a relatively robust furlough and salary reduction program,” Heeke said. “Now we’re going back to look at larger buckets, areas that we would reduce.”

While Heeke said cutting sports is “not on our list at this time,” staffing changes or reductions are possible.

“It’s all being evaluated, what type of staffing we would have, and those are very challenging conversations and discussions,” Heeke said. “But our bullseye is the student-athletes and the services that are provided. We will continue to train and be ready and move forward.

“We will continue to support them academically, medically, mental-healthwise — all of those wraparound services. We don’t want to harm that for as long as we possibly can. And we think we can put strategies together that will allow us to do that.”

Without football games being played, UA will save some in expenses. In 2016-17, UA reported $2.31 million in game-day expenses and another $1.04 million in travel related to football, while recruiting ($519,000) is also likely being reduced now since in-person visits have been forbidden during the pandemic.

Still, whatever it does, UA won’t be able to offset a $60 million to $65 million loss within the fiscal year even if it cut all nonrevenue sports, or even if it laid off its entire staff, suggesting a loan or massive fundraising may be necessary.

Heeke said UA is continuing to appeal to donors, telling them that their dollars are now pivoted solely to student-athlete services, while Nelson noted that Wisconsin launched a separate fundraising drive after fall sports were canceled.

The website for the “Badger Legacy Campaign” says that “without financial support from our community, the experience we love as Badgers could be at risk” because of a revenue shortfall it estimated in excess of $100 million.

“At the end of the day, it’s actually going to be a mixture” to fill the revenue gap, Nelson said. “Most schools are gonna have three levers that they are pulling. One will be fundraising — why would you not try to get as much support as you can without taking on debt?

“The second will be cuts, which will vary considerably by school, and the third will be debt. How much debt can we take on?”

According to the San Jose Mercury News, the Pac-12 arranged a loan program for members schools to borrow up to $83 million each at a 3.75% interest rate. Heeke said Friday that the school has discussed loans with the conference.

“Nothing has been secured or finalized in any way, but we would entertain some sort of bridge funding if and when it’s available,” Heeke said. “We have to maintain some level of operation and keep our programs moving in a positive direction so that when we do come out of this, we’re in a better place to evolve and go forward.”

Arizona Wildcats athletic director Dave Heeke held a Zoom conference on August 14 to discuss the financial fallout of no UA sports until 2021,…

NCAA is open to 'bubble' for college hoops; could Pac-12 reconsider its decision?

The NCAA is looking into holding mini basketball bubbles as early as late November, when most schools will be either fully remote or on winter break. The Pac-12 said there will be no sports until January. Could that change?

‘Painful and difficult decision’: Why the Pac-12 decided to nix football, other fall sports

The Pac-12 Conference has postponed all fall and winter sports, including football, for the remainder of 2020 because of the coronavirus pandemic.

Fall without football could spell financial disaster for University of Arizona, other athletic departments

The Pac-12’s decision Tuesday to postpone all sports competition until at least January meant the fiscal bus-driver of college sports, football, will be heading off a cliff in 2020-21. Even if the sport manages some sort of spring season, the money likely won't be the same.

The UA athletic director echoed a shift in thinking in the Pac-12 now that fall sports are off the table; but is a spring, or spring-adjacent, season a viable alternative?

Gardner will take over at his former high school, Indianapolis' North Central.

Arizona's Chandler Jones thinks he can break the record of 22 1/2 sacks set by Michael Strahan in 2001.

Arizona beats San Diego 5-1 Friday night in the eighth meeting between the teams this year.

The Wildcats are chasing another West Coast Elite talent.

“I just felt like there's no better time," he said. "I was ready. I was all in. It just felt right.”

Estonian point guard Kerr Kriisa has gotten a taste of Eegee's — and the suffocating heat — since arriving in Tucson.

Phelps had been working for West Coast Elite since his UA contract expired in June 2019.

Robert Robbins says he wanted fans at Pac-12 events but Calif. schools 'just couldn't do it'

The Pac-12 voted together not to have fans out of solidarity for schools who could not.

Meet the Arizona Wildcats, from international recruits to key returners

Meet the Arizona Wildcats, from international recruits to key returners 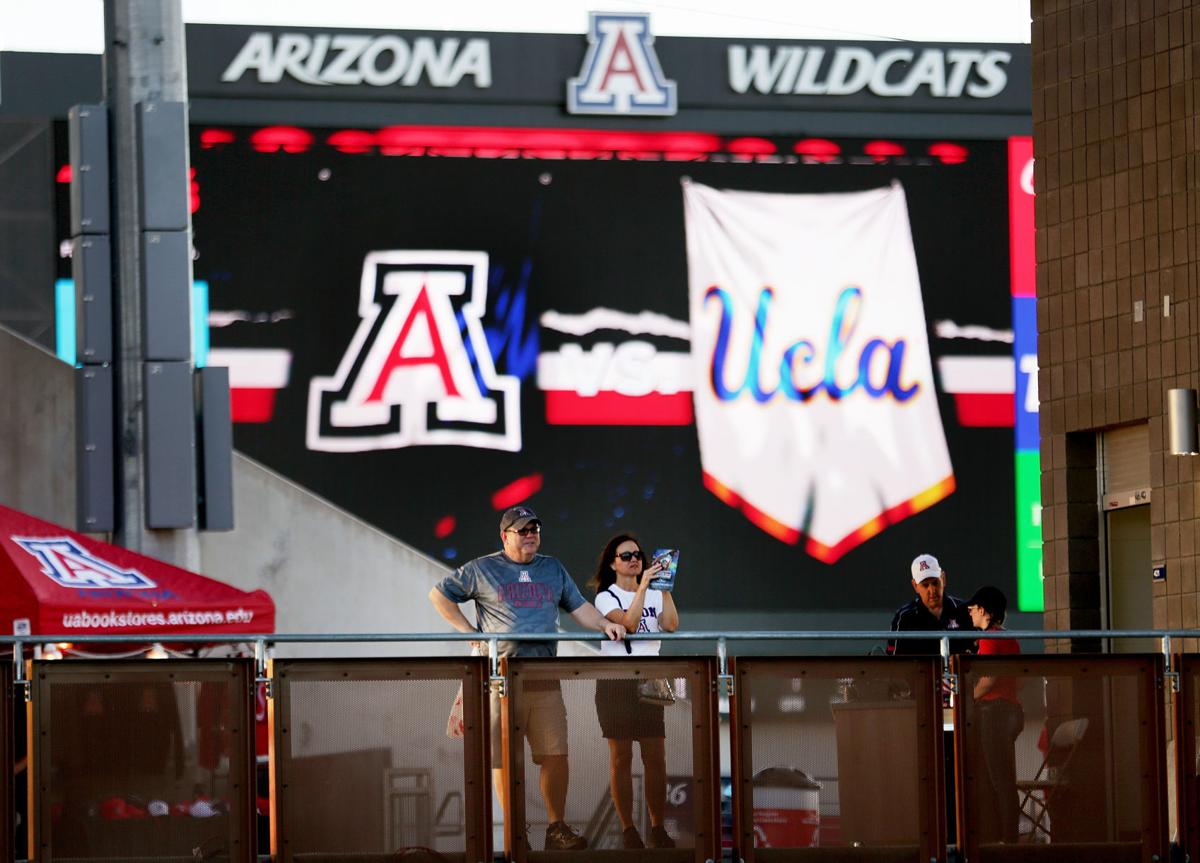 Saturdays in fall usually mean football, and a move to spring — while it would help to some degree — could still be a major problem for UA and other schools. The Pac-12 and Big Ten canceled their 2020 seasons this week. 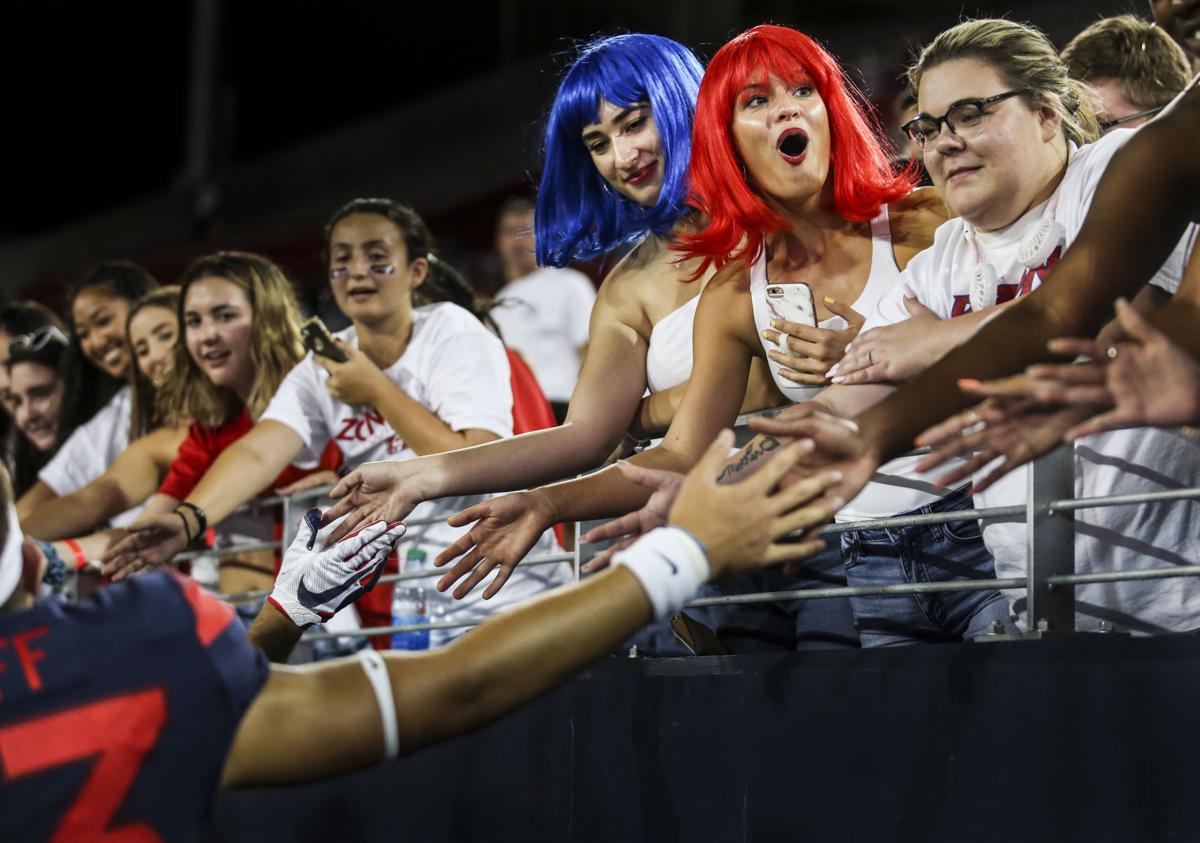 UA may try to deal with a year without football by focusing on fundraising, cutting costs and taking on debt. Arizona AD Dave Heeke says the school has talked to the Pac-12 about loans.