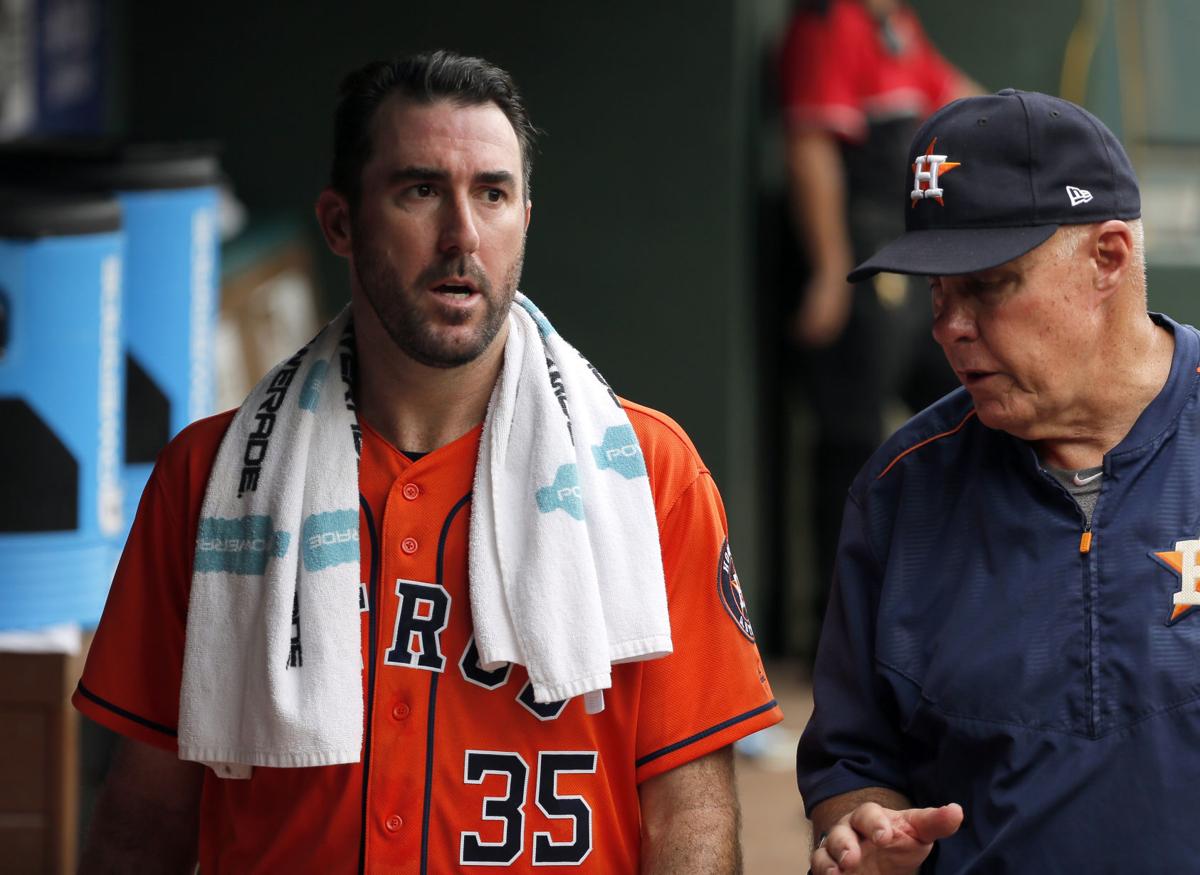 Tucsonan Brent Strom, the Houston Astros pitching coach, talks with Justin Verlander in a late September game. After a half-century in the game, Strom will be part of a World Series team starting Tuesday when Houston faces the Los Angeles Dodgers. 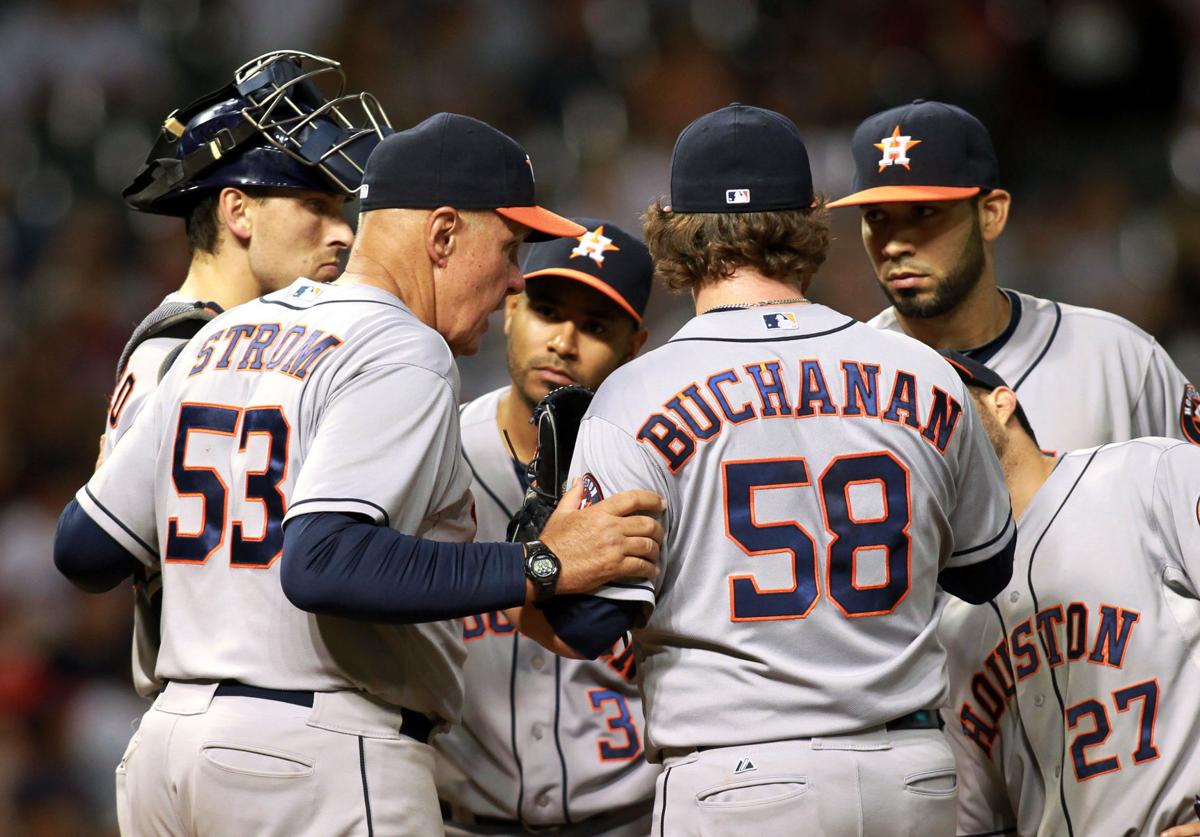 Brent Strom used to walk into the lobby of the Arizona Daily Star and buy a small advertising space in the sports section.

These advertisements would vary. Some read “STROM PITCHING INSTITUTE.”

Others were “TUCSON SCHOOL OF BASEBALL.”

Strom offered instruction in “arm health” and “velocity enhancement” and year after year, whether he was a pitching coach employed by the Astros or Cardinals or Royals, it was a chance to learn from one of the game’s leading authorities.

Once, young Tom Wilhelmsen called the accompanying phone number, a land-line in Strom’s northeast side home, published in the small newspaper ad.

About a decade later, after Wilhelmsen saved a combined 53 games for the 2012 and 2013 Seattle Mariners, he told reporters Brent Strom taught him to throw a curveball.

That’s when you know you’ve made an impact.

Tuesday night at Dodger Stadium, after a half-century in baseball, Strom’s journey takes him to the World Series for the first time. If you count all of his days pitching in the minor leagues and the big leagues, if you throw in all of his nights coaching in ballparks from Hi Corbett Field to Yankee Stadium, Strom will be in uniform for about the 6,000th time.

It will be the first game he spends on the top step of the dugout in a World Series, calling pitches for the Houston Astros.

His is a remarkable journey that began on the sandlots of San Diego in the 1950s and processed through San Diego High School, San Diego City College and to the USC Trojans where, in 1970, he pitched against future Hall of Famer Mike Schmidt of the Ohio Bobcats in the College World Series.

The Los Angeles Times referred to Strom as “the southpaw sizzler from San Diego” as he pitched the Trojans to 1968 and 1970 national championships. A decade later, after his once-priced left arm conked out, Strom was pitching out the string for the Tucson Toros, managed by Rincon High grad Jimmy Johnson.

Strom has lived in Tucson for the last 30 years. When the Astros and Dodgers play Game 1 in Dodger Stadium on Tuesday night, Strom will go over his game plan with Houston bullpen coach Craig Bjornson, who was part of Tucson High’s 1987 state championship baseball team.

Strom is 69 now, and some might not recognize the once-angular 6-foot 3-inch high school basketball star — yes, basketball — who made the 1966 All-CIF team while playing center for the San Diego High Cavers.

Strom grew up playing Little League baseball for teams sponsored by his father, Chester Strom, who operated a florist business in San Diego for 60 years before retiring to Tucson in the early ‘90s. That meant Strom often had “Strom’s Flowers” across the front of his Little League uniform

This week he has “Houston Astros” across his chest.

“I live very close to (Houston’s) Minute Maid park,” Strom told reporters recently. “I don’t have a car. I walk to the park and get there about 11 a.m. for a night game. I’ll scour scouting reports. I’ll look at video. I’ll rewrite my notes. I have notecards that I keep in my back pocket. I’ll talk to our analytics people and to CB (Bjornson) to get the pulse of what’s going on.”

It is that thoroughness and approach that made Strom one of baseball’s leading pitching authorities over the years. He has coached in China and in Sweden. He has coached on the burnt-out grass at many of Tucson’s high schools.

If he hasn’t seen it all, who has?

At 24, in Strom’s major-league debut, July 31, 1972, he walked from the Shea Stadium bullpen to the pitching mound for his first career start. Who knows what ran through his mind when he looked around the infield and saw Willie Mays playing first base for the Mets?

Strom might’ve felt at home that night; the home plate umpire at Shea Stadium was Doug Harvey, who had officiated many of Strom’s high school basketball games in San Diego. But if Strom learned anything in baseball, it’s that home is where you make it.

He was released by the Mets, Indians, Padres and Indians. He has been hired and fired and re-hired by the Astros. He required two arm surgeries. He sat out a year, 1977, working on a master’s degree at San Diego State. He was on the scene in September 1991 when the Tucson Toros won their first-ever Pacific Coast League championship, spraying champagne in every direction.

The World Series may be unfamiliar territory to Strom, but Dodger Stadium and the Dodgers won’t be. He pitched there several times in his career, and from 1987-89 was a pitching coach in the Dodgers’ farm system.

At the conclusion of the ’89 season, the Dodgers told him they were reassigning him to Class A Bakersfield. Strom chose to resign.

A few weeks later the Astros phoned, offered Strom a job in Tucson, at Triple-A, and at 41, his career began anew.

After all these years, the southpaw sizzler has arrived.

Tucsonan Brent Strom, the Houston Astros pitching coach, talks with Justin Verlander in a late September game. After a half-century in the game, Strom will be part of a World Series team starting Tuesday when Houston faces the Los Angeles Dodgers.