Junior college football in the state of Arizona as we knew it ended on Dec. 2, when Eastern Arizona College lost to Jones College 27-7 in the Mississippi Bowl at A.L. May Stadium in Perkinston, Mississippi.

Earlier that year, the dominoes had begun to fall.

In February, the Maricopa County Community College District said it would be eliminating football at the four county schools that still played it: Glendale, Mesa, Phoenix and Scottsdale. In June, Pima College followed suit. Three days after EAC’s last game, Arizona Western College announced it would be dropping football. Six days after that, EAC – the last school standing – reluctantly fell in line.

The Maricopa schools cited financial issues. Pima did as well. Arizona Western and Eastern Arizona no longer had enough opponents to put together a fiscally responsible schedule with more than half the football-playing schools in the Arizona Community College Athletic Conference having dropped the sport.

More than seven months after that last game, with training camps about to open at all levels of football across the country, the reverberations of the statewide decision to eliminate junior college football are still being felt.

Most of the players who would have been sophomores at one of those seven schools have found places to play. Most of the coaches have found new jobs. A startup league is seeking to revitalize JC football in the state.

But some have fallen through the cracks, unable to find the right fit to extend their football careers and dreams. And the entire situation — an entire state dropping a sport that provided a gateway to higher education for hundreds of young men annually — has created an empty feeling in the Arizona football community as a whole.

“You’ve got a chance to change somebody’s life,” said John O’Mera, EAC’s head coach from 2005-18. “You don’t always recognize it today. In this business, it’s 10 years later. Some kid calls you and thanks you, telling you all this stuff you did for him, and you don’t even remember it. That’s what makes it all worthwhile. You’ve got a bond for life. It’s a neat, neat thing.”

Junior college football has impacted the lives of countless coaches and players. What is Arizona missing without it — or at least the traditional version of it?

The Star steps into that void in the first of a three-part series on the fallout of Arizona axing JC football.

Means to an end

Johnson and Cruikshank had academic issues in high school that prevented them from going directly to Division I universities. That’s just one demographic the junior college system serves. There’s a reason Netflix’s documentary series about JC football is called “Last Chance U.”

“A lot of kids get overlooked for one reason or another,” said Richard Taylor, the coach at Peoria Centennial High School, which produced former UA receiver Shawn Poindexter and current offensive lineman Steven Bailey — who both played at Glendale Community College.

JC football, Taylor said, provides an opportunity for players who underperformed academically or are undersized or simply aren’t quite ready for a four-year school.

Taylor experienced the benefits of junior college football first-hand. His son, Andrew, played at GCC before earning a Division I scholarship to Tulsa. Andrew Taylor is now the defensive coordinator at Centennial, one of the strongest high school programs in the state.

Andrew had some smaller-school opportunities coming out of high school. By staying and playing at home at GCC, he saved the family about $20,000 in tuition and related costs, his father estimates.

But even with partial scholarships, they’re considerably more expensive than the state’s junior colleges.

The head coach of one of Centennial’s rivals has lived the JC life. Peoria Sunrise Mountain coach Steve Decker didn’t have many options coming out of Glendale Apollo High School in 1989. Academically, he was a nonqualifier. Nobody from his family had graduated from college, and he isn’t sure he would have continued his education if not for a chance to play football at GCC.

“It helped me grow up and mature,” said Decker, who then transferred to play at Western Illinois. “I now have a bachelor’s, a master’s. I don’t know if I would have had an AA degree.”

Edgar Soto, Pima’s former athletic director, often said that sports are the carrot junior colleges can dangle in front of kids who might not otherwise have pursued higher education.

Dr. Christopher Parker, the president and CEO of the NJCAA, summed up the mission of junior college football as follows:

“We simply always say, but for athletics, how many of those individuals would attend college? We use the sport of football to open the doors to access education on those campuses. That’s the biggest draw for us.”

When Eastern Arizona became the seventh and final school in the state to drop football, the number of NJCAA institutions playing the sport fell to 65. Many became landing spots for players from the Arizona schools who would have been sophomores this season.

The NJCAA tried to make that process as seamless as possible by expanding the windows in which student-athletes could sign with new schools. Still, it was a challenge for the coaches of the seven Arizona junior colleges to place roughly twice as many players as they would in a normal cycle.

It was also their top priority.

“The players were the No. 1 concern,” said Doug Madoski, the former coach at Scottsdale Community College who’s now coaching the Maricopa Mustangs in the new Hohokam Junior College Athletic Conference. (Read more about it in Monday’s Star.)

Madoski worked on finding new schools for his ex-players as late as May 10, his last day as an employee at SCC.

“We promised those parents we’d take care of their kids,” O’Mera said. “Then you start applying for jobs.”

O’Mera landed one with the Sonoran Sidewinders, Tucson’s entry in the HJCAC. O’Mera officially became the team’s coach in June.

A year earlier, Jim Monaco learned his coaching tenure at Pima would have an expiration date. He understood and accepted the reality of the situation — “The budget is the budget,” Monaco said — but that doesn’t mean he had to like it.

“Would I have tried?” Monaco said when asked if he considered a last-ditch campaign to save football at Pima. “I probably would have tried so hard I would have killed myself.

“But I can’t raise that amount of money. So what are you gonna do?”

Monaco’s work as the Aztecs’ football coach since 2014 earned him a promotion; he was named Pima’s interim athletic director in October. But he’ll never stop thinking of himself as a coach.

The Star is exploring the aftermath of Arizona discontinuing junior-college football. This is Part 1 of a three-part series.

How JC football died in Arizona

Feb. 5, 2018: Maricopa Community College District announces the elimination of football at four schools following the 2018 season, citing financial issues. MCCCD officials tell The Arizona Republic that football makes up 20 percent of the district's total athletic budget and is responsible for more than 50 percent of insurance costs, and that maintaining the programs could cost another $20 million.

The news comes as a surprise: Officials said three months earlier that they were keeping football.

“Although this is a disappointment to our student athletes, coaching staff, and football fans, it is ultimately the right decision for the district and the long-term success of students,”  district spokesman Matt Hasson says. “As an essential resource to the community and businesses, MCCCD must be responsible for the financial resources it has been entrusted with.”

“Had they not dropped their programs, I think this conversation would still be had because of our budget situation,” Soto says. “For me, in my opinion in looking at everything, it was financial. Football is the costliest sport and one that costs more than any other sport. For me, it was financial when looking at the budget.”

Soto had been tasked with cutting $500,000 from the annual budget. He presented Chancellor Lee Lambert with four budget proposals: Two $1.9 million plans (one with football and one without), a $1.7 million plan and a $1.5 million plan. Lambert chose the costlier plan, but without football.

June 14, 2018: Eastern Arizona College announces it will play the 2018 season while conducting a "careful review" to determine if a schedule is viable. With no Maricopa County schools and Pima College to play starting in 2019, EAC would have needed to travel more — a major bump in costs.

Dec. 1: Pima College plays its final game, a 28-0 loss to Kilgore College in the C.H.A.M.P.S. Heart of Texas Bowl in Waco. The Aztecs finish 6-4 in their final season after starting 6-0.

Dec. 5: Arizona Western says that it will eliminate football after being "unsuccessful in carving a sustainable path forward" for the program. The school considered playing schools in California and elsewhere following the collapse of the Western States Football League.

Dec. 11: EAC announces that it will no longer play football. The school says it will honor all scholarships offered to players or assist in a transfer to the schools of their choice.

Actress Jane Seymour in Tucson to throw out first pitch, support son who's following his passion

Kristopher Keach, 23-year-old son of the famed actress, is a pitcher for the Tucson Saguaros.

Dems vying to be Tucson's next mayor clash on campaign promises, political records

When Pima College dropped football, Christian Massey did too — and he’s at peace with the decision.

Dion Wilson is the ninth player to commit to coach Kevin Sumlin's second recruiting class at the UA.

Her son, Kristopher, pitches for the Tucson Pecos League team.

JC football fallout: New league brings hope that the sport can be revived in Arizona

The Hohokam Junior College Athletic Conference, featuring four teams in Maricopa County and one in Tucson, is set to begin play Aug. 24.

Colin Schooler and Tony Fields have been paired together ever since their freshman season at Arizona in 2017. Recently the UA's junior linebac…

Khalil Tate, the defensive line and recruiting are among the hot topics entering the conference’s annual kickoff event.)

The Utes get the nod in the South; Oregon edges Washington in the North.

'There is not a more fitting way to honor Dick Tomey,' says Nanci Kincaid, Tomey's widow. 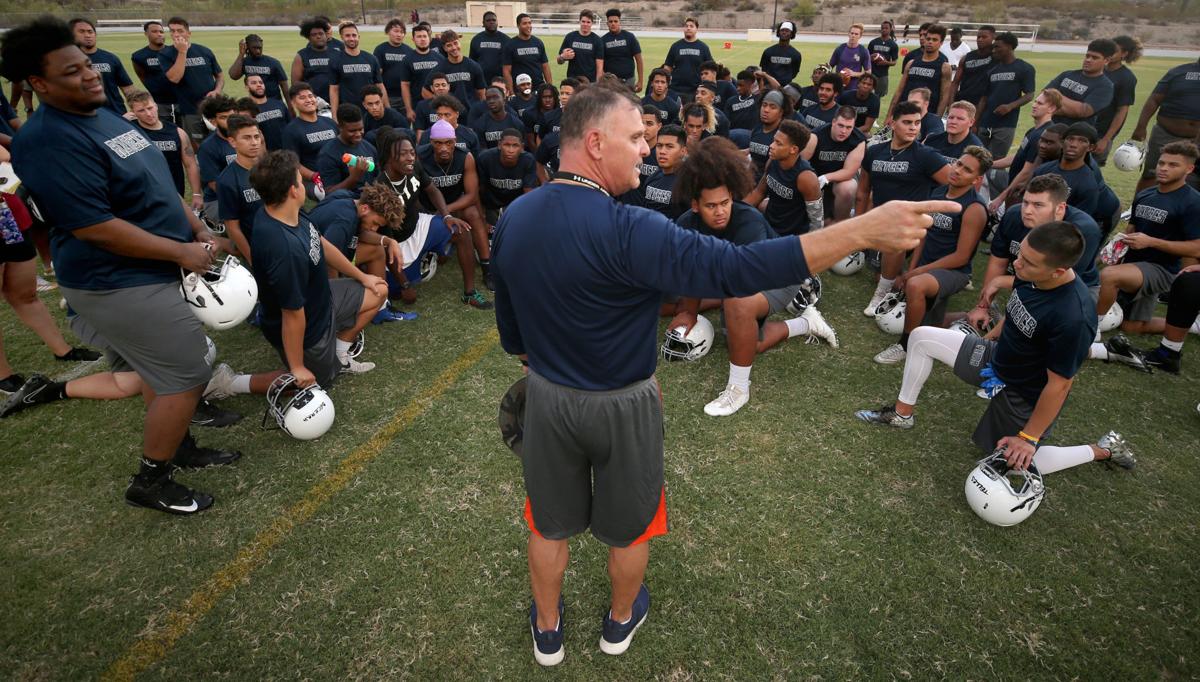 Jim Monaco says he’ll be known as “Coach” until the day he dies — even though Pima College’s program folded in December. 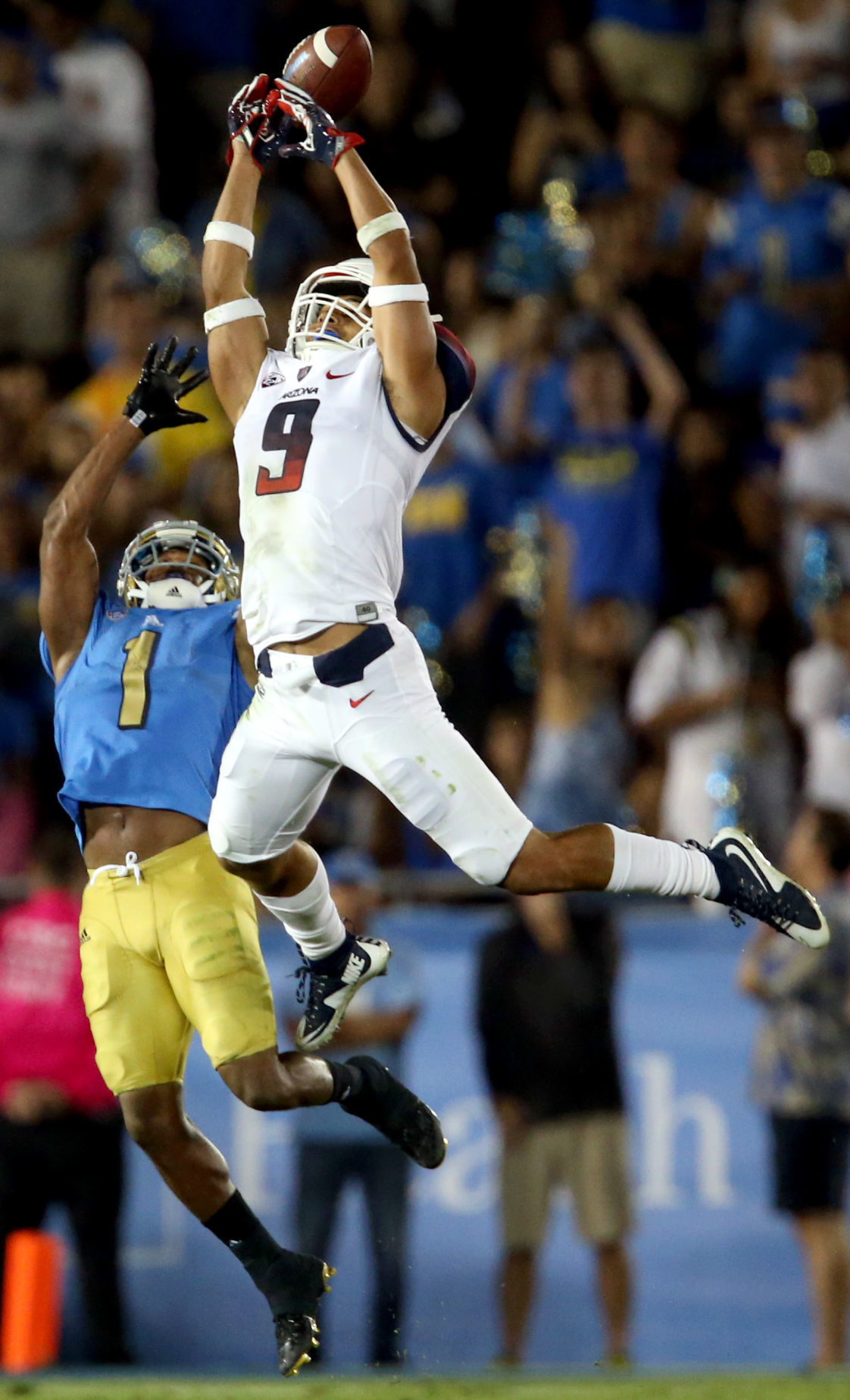 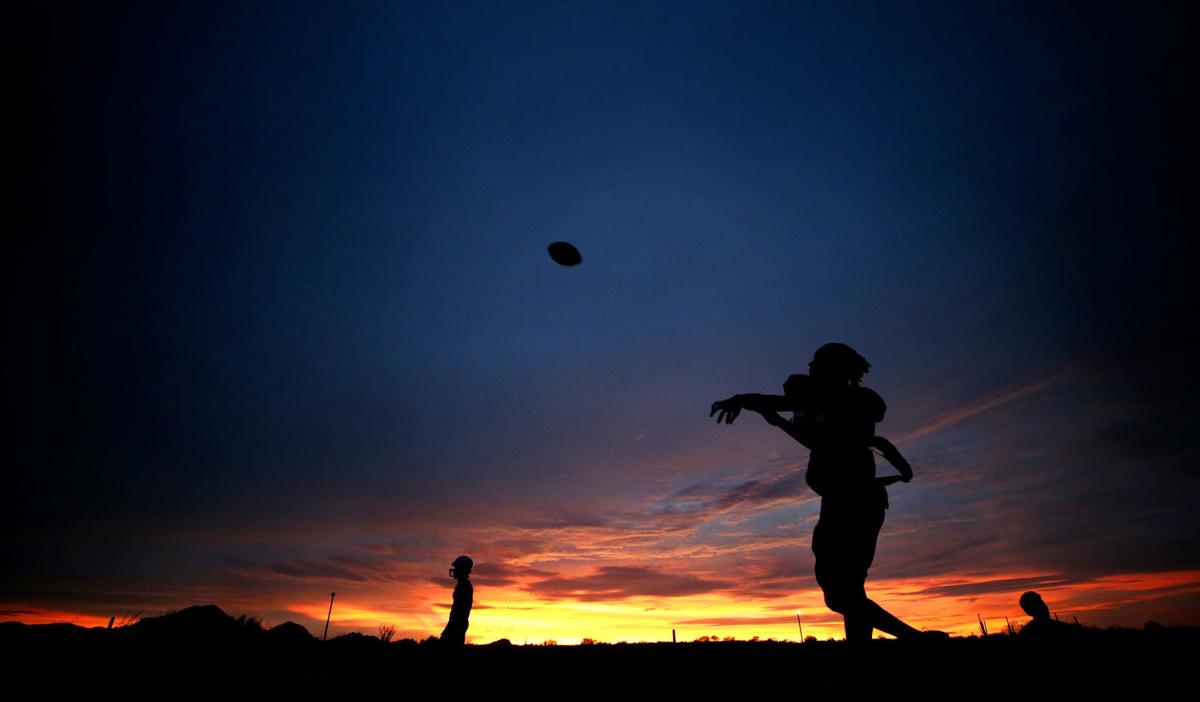 Quarterback Marquise Cooper heaves a throw downfield, working with a few receivers well after sunset and into the dark at practice for the Pima Community College football team, Thursday, August 23, 2018, Tucson, Ariz.