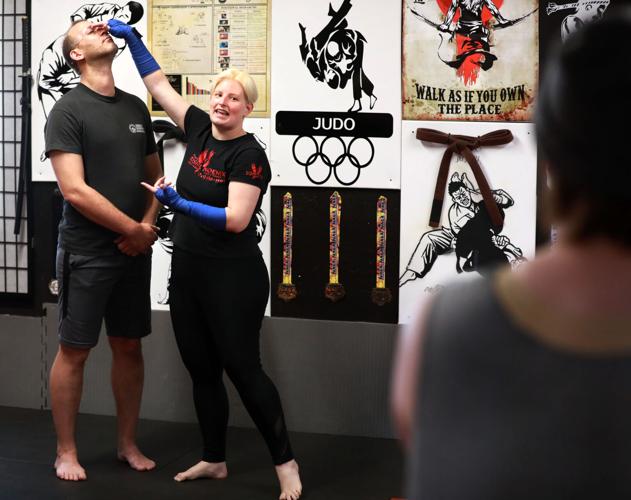 Lauren Redman took over the Rainbow Connection self-defense class at Tucson's Rising Phoenix Fitness & Defense gym last year. Redman is demonstrating how to poke out the eyes of an attacker who is being played by Noel Crabtree, the assistant instructor. The class meets every Saturday from noon to 1 p.m. at the gym located on 4500 E Speedway. 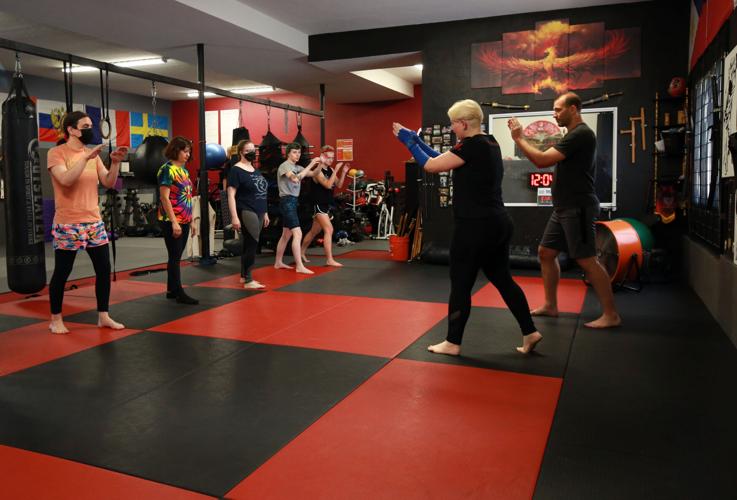 After warm-ups and stretches, the class lines up in front of the instructors. The class repeats the defense pose that Redman and Crabtree are demonstrating. 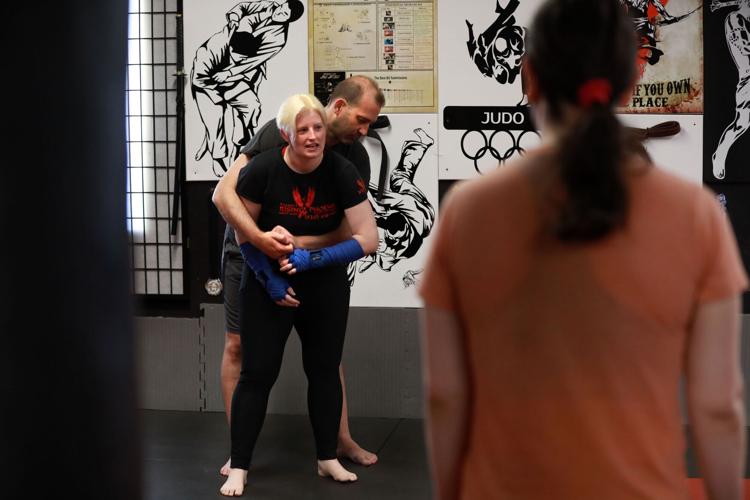 Lauren Redman shows the class that if an attacker grabs you from behind, it is important to create space between you and them. Redman goes on to show how to break the fingers of an assailant as the class watches. 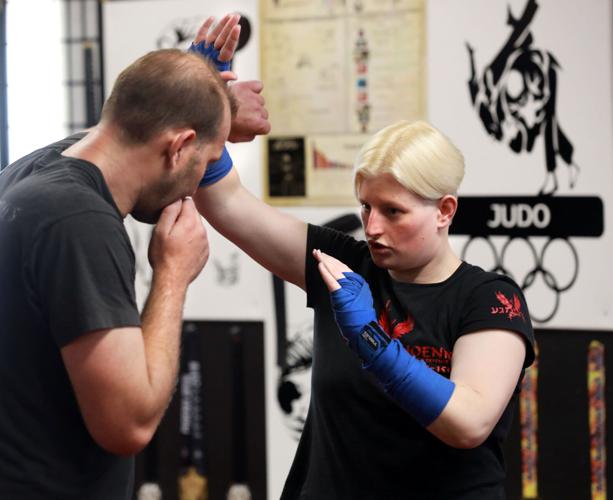 Noel Crabtree, left, attempts to throw a left overhand punch at Lauren Redman. Redman shows the class how to correctly block the attempted assault, before the class breaks off into pairs. 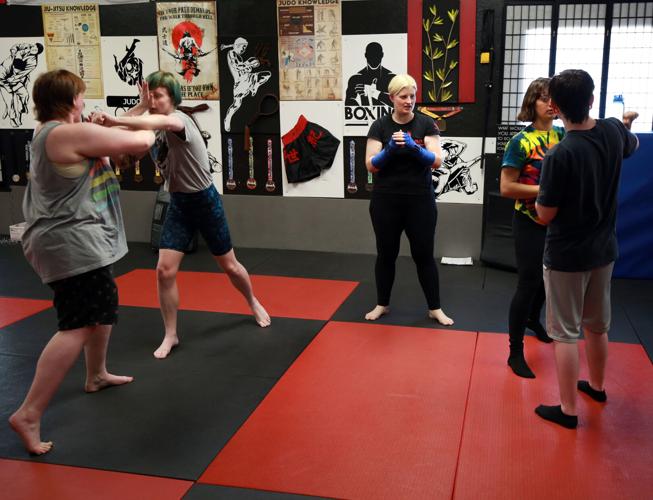 Lauren Redman walks around the room and critiques pairs of students as they practice blocking punches.

“I'm very dedicated to the idea of self-defense. I don't think anyone should ever feel unsafe. Honestly, I think it's a basic human right to feel safe,” Redman said. “And a big part of this program is just promoting that and also just reminding people that you're already strong for being who you are. We're just bringing that out.”

The classes are donation-based, meaning there isn’t a required fee to participate. But donations are encouraged to help keep the program running, according to Redman, who added that while the classes are open to any age, they're generally not recommended for young children as the classes occasionally touch on adult themes.

Redman primarily uses Krav Maga techniques throughout the classes because it’s “immediately useable,” she said. The self-defense style focuses on “(unarmed) reflexive responses to threatening situations,” according to the Oxford English Dictionary.

To keep the classes fresh, Redman implements themes relevant to each month. For example, during October, she held a Halloween-themed class that focused on slasher movie attacks while participants wore masks and other costume items during their self-defense training. Last month, she hosted a St. Patrick’s Day-themed class on utilizing self-defense techniques when you’ve had a few celebratory drinks and may be a little wobbly.

These types of classes, she says, help participants have “a little bit of fun while dealing with this kind of scary situation.”

While not all classes have a holiday theme, they all focus on a vital self-defense principle called RCAT — redirect, control, attack and takeaway.

“We talk a lot about principles because not every single situation in real life ever happens as cleanly as it does in the gym,” Redman said.

Every class begins with a yelling activity to help break the ice and show participants the importance of their voice. During the exercise, individuals yell out phrases like “Back off!” and “Let go of me!”

“(When) I talk about vocalizations, using your voice, I would say how powerful using your voice is. I feel, especially in the LGBTQ+ community, we're told to shut up a lot (because) people don't want to hear about it,” Redman said. “But use your voice like it’s a weapon.”

After the yelling activity, Redman teaches striking or takedown techniques followed by self-defense drills that can include the “beat up Bob” drill, which involves striking a foam torso for a full minute.

However, the classes vary based on what the students want to learn, Redman said, so they are able to take those skills and utilize them outside of the gym if necessary.

A recent study done by The Williams Institute at the University of California at Los Angeles’ School of Law shows that members of the LGBTQ+ community are four times more likely to experience "violent victimization" than non-LGBTQ+ individuals.

“It can be a little heartbreaking for me on a personal level,” Redman said. “I mean, people will tell me their stories, people will tell me things that they've had to deal with in their lives. And it's horrifying, like it lights a fire under me even more and I’m like, ‘I'm so sorry you ever had to go through that, let's make sure that never ever happens again.’ It makes me more determined than ever to be the best teacher I possibly can.”

Despite the occasional emotional heaviness from hearing participants’ personal stories, Redman finds it all worth it when she sees the “aha moment” of participants successfully executing a technique in a place where they feel safe.

“I don't know how many classes like this exist in the U.S. or North America, but it is nice to participate in something like Krav Maga and have it be with other people from my community,” said Ryan Ban, a participant of the Rainbow Connection program. “I mean, usually, when I take regular classes, I might be the only queer person in the room. I mean, most often, that's the case. So, to have a class where, in fact, everyone else is queer as well, it's joyful.”

“I think now more than ever, we're dealing with so much hate and so much just pressure and fear in our society,” Redman said. “Having a place where, no matter what, you're going to be safe, is more important than ever. … And we're going to give you the tools and the skills to take that with you.”

Redman began her journey at Tucson’s Rising Phoenix as a student two years ago, when she attended women’s self-defense and Rainbow Connection classes.

So, when Tucson’s Rising Phoenix team approached her to take over the Rainbow Connection classes in the summer of 2021, she said it was an unexpected turn in her personal life but a turn that she’s come to love.

“I never expected to be teaching a self-defense class,” Redman said. “But it's a fantastic program and it's just such a great representation of Rising Phoenix itself, like the gym that we're a part of. And that, we approach it in a very compassionate way. We're all about safety and, like, personal ownership of your space and your ability.”

And students say that Redman hasn't skipped a beat since taking over.

"Lauren jumped right in and made the class her own," said Sam Winn, a participant of the class. "And she's one of those people that's just always there. She's very funny. She can bond with people from a lot of different groups and just makes it a really fun, playful, safe space."

Before joining Tucson's Rising Phoenix, Redman tried different forms of martial arts like Kenpo and wrestling at other local fitness centers but felt the need to find something different from those gyms that she described as “testosterone-heavy.”

“The first day I walked into the Rising Phoenix gym, I was like, 'This is what I'm looking for,'” she said. “Like, it's a very unique environment. I will say it's definitely not something that you see every day, but everyone is so kind and compassionate and just open and I've never once, in the time I've been there, never felt uncomfortable or unsafe. Or like I wasn't respected or like my trauma or the things that I've had to deal with were invalid. And I think that we try to represent that to everybody.”

The Rainbow Connection program began in 2015 and has fallen into the hands of a couple of instructors before Redman took over. But now that she’s at the helm, she has one message for Tucson: the program is here to stay.

Although the Rainbow Connection program is currently only at Tucson’s Rising Phoenix gym, Redman hopes to expand the program across Tucson and even out of state, so everyone can have the tools they need to be safe wherever they may be.

Redman is also currently in the beginning stages of getting in contact with individuals from the Southern Arizona AIDS Foundation, the University of Arizona and Pima Community College to try to host seminars in the future in hopes of keeping Tucson's LGBTQ+ community connected to safety resources.

“We're here and we're here to stay,” Redman said. “I want to say, we, LGBTQ+ is not going away. Ever. We've been around forever and we're not going away anytime soon. The problems that face us aren't going away either. And we need to be able to protect ourselves. No one should ever have to deal with feeling like they aren't safe. And I'm going to do everything in my power, and Rising Phoenix and Rainbow Connection are going to continue doing everything we can, to make people safe.”

Familias Unidas Ganando Accesibilidad, also known as FUGA, was founded in 2018 in Tucson, Arizona. The organization advocates for mobility, accessibility and representation for Tucson's south-side and west-side communities.

Climbing in Color, a new nonprofit organization based in Tucson, is creating community in Southern Arizona and beyond for climbers of color.

What to do in Tucson this weekend? We'll tell you: Agave Heritage Festival, Tucson International Mariachi Conference, Pima County Fair, Arizona International Film Festival, plus tons of markets, kid-friendly events and more in the Tucson, Marana and Oro Valley areas.

The four-day Tucson festival celebrates the heritage and culture of agave. Check out the Agave Heritage Festival 2022 from April 28 to May 1.

Refill your soaps, shampoos and cleaners at this local 'refillery' and zero-waste shop ♻️

Desert Rose Collective offers Tucsonans a chance to refill their empty containers with environmentally-friendly soaps, shampoos, detergents and cleaners. Shop owner Alena Straus hopes that refilleries such as hers will help reduce plastic usage and waste in landfills.

Elvia is a journalism and history graduate from the University of Arizona. She hopes to create stories that show what makes Tucson and its community special. 🌵