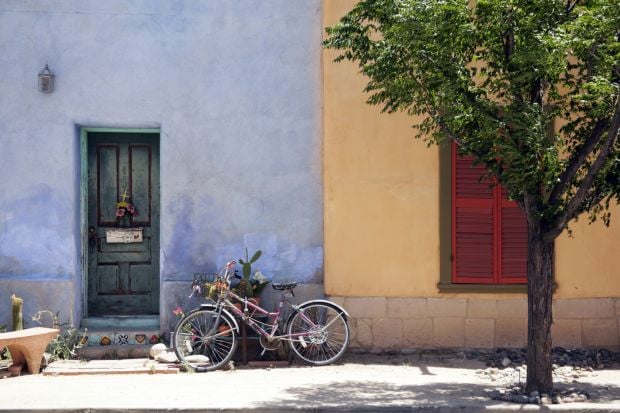 Tucson's Barrio Viejo is made up of Barrio Libre, Barrio El Hoyo and Barrio El Membrillo. 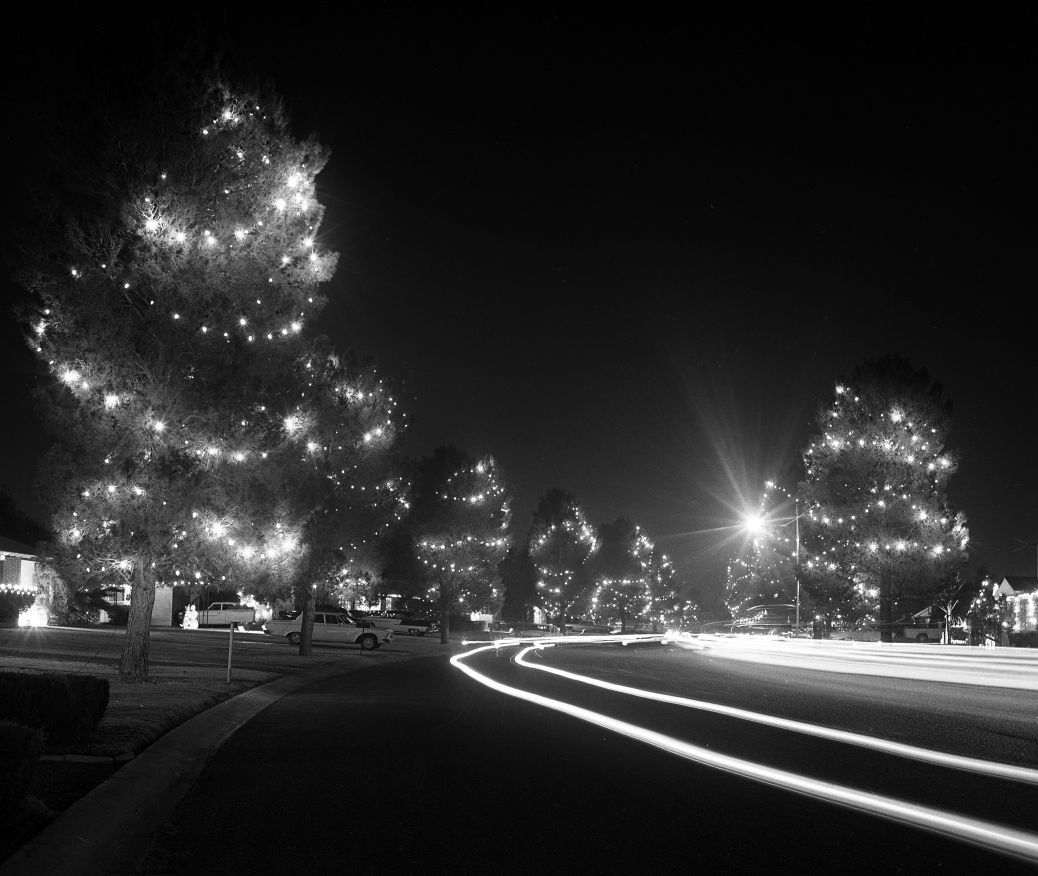 Winterhaven Festival of Lights in Tucson in December, 1964. Time exposure at Christmas Avenue and McKenzie Street. 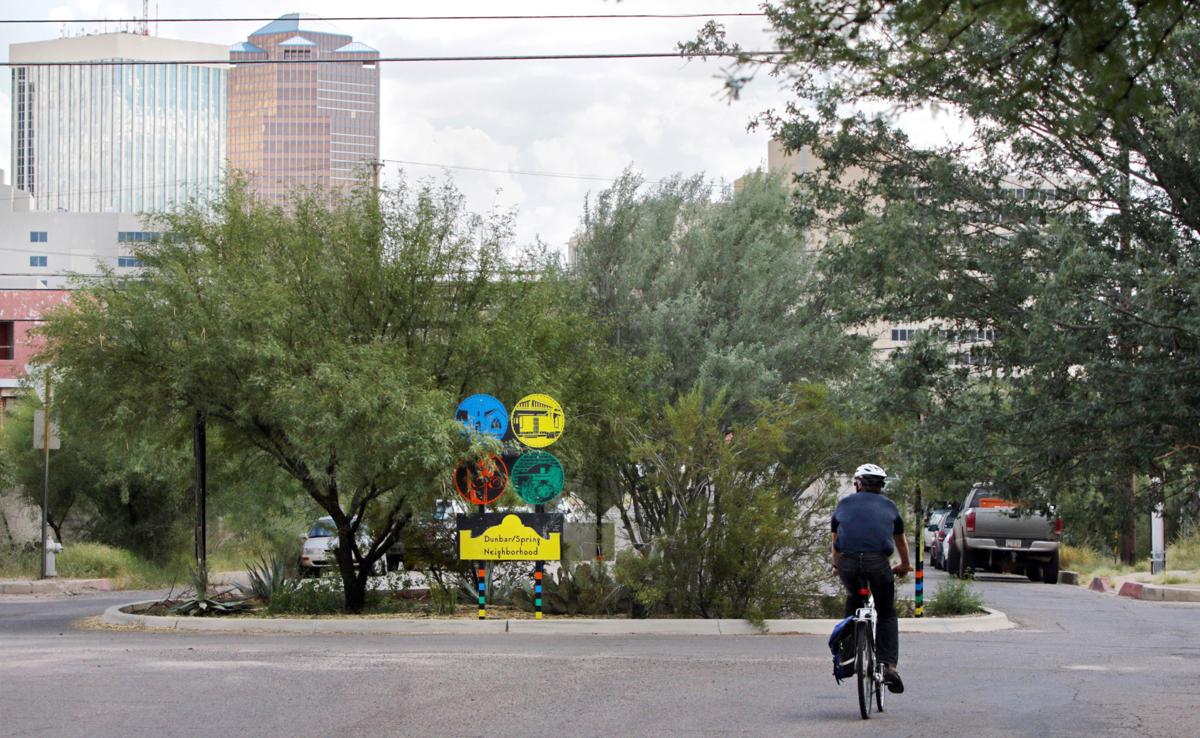 Higher costs for the Downtown Links plan have Dunbar/Spring residents worried about a promised park atop an underpass. 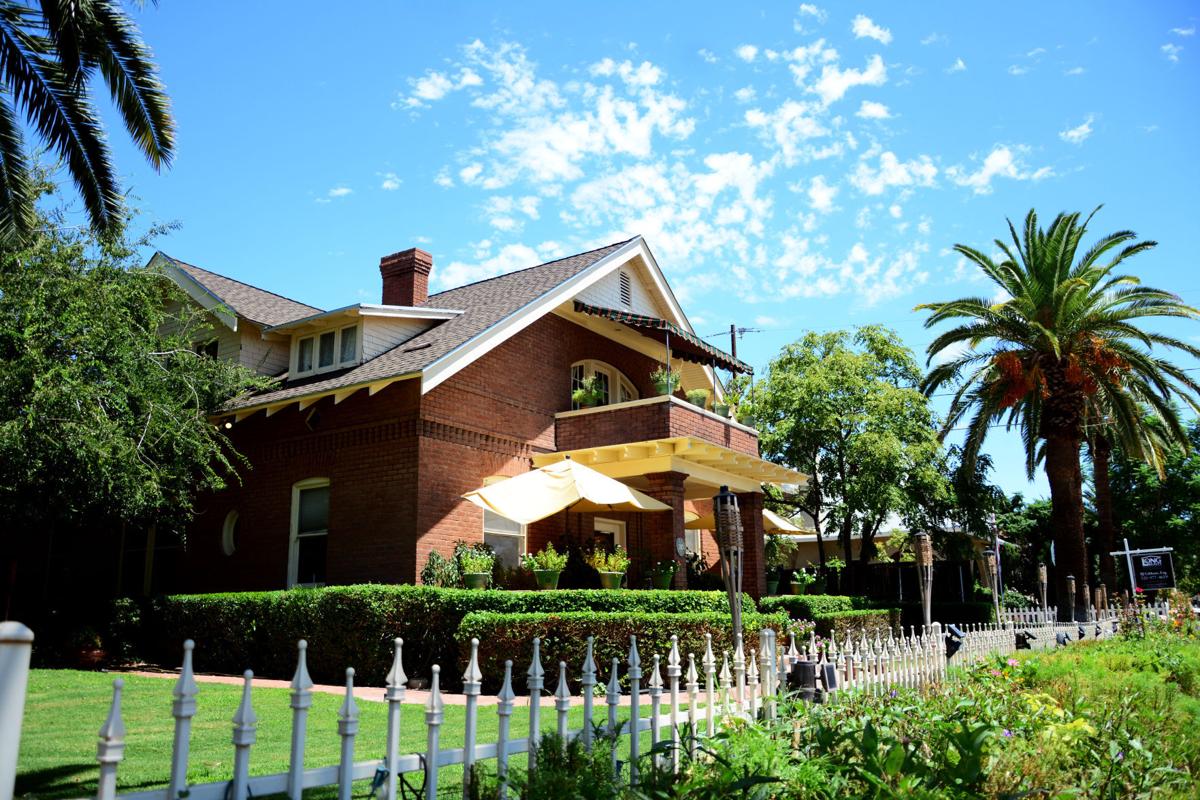 “We have the most diverse architectural palette of all the (historic) neighborhoods,” says Chris Gans, president of the West University Neighborhood Association. 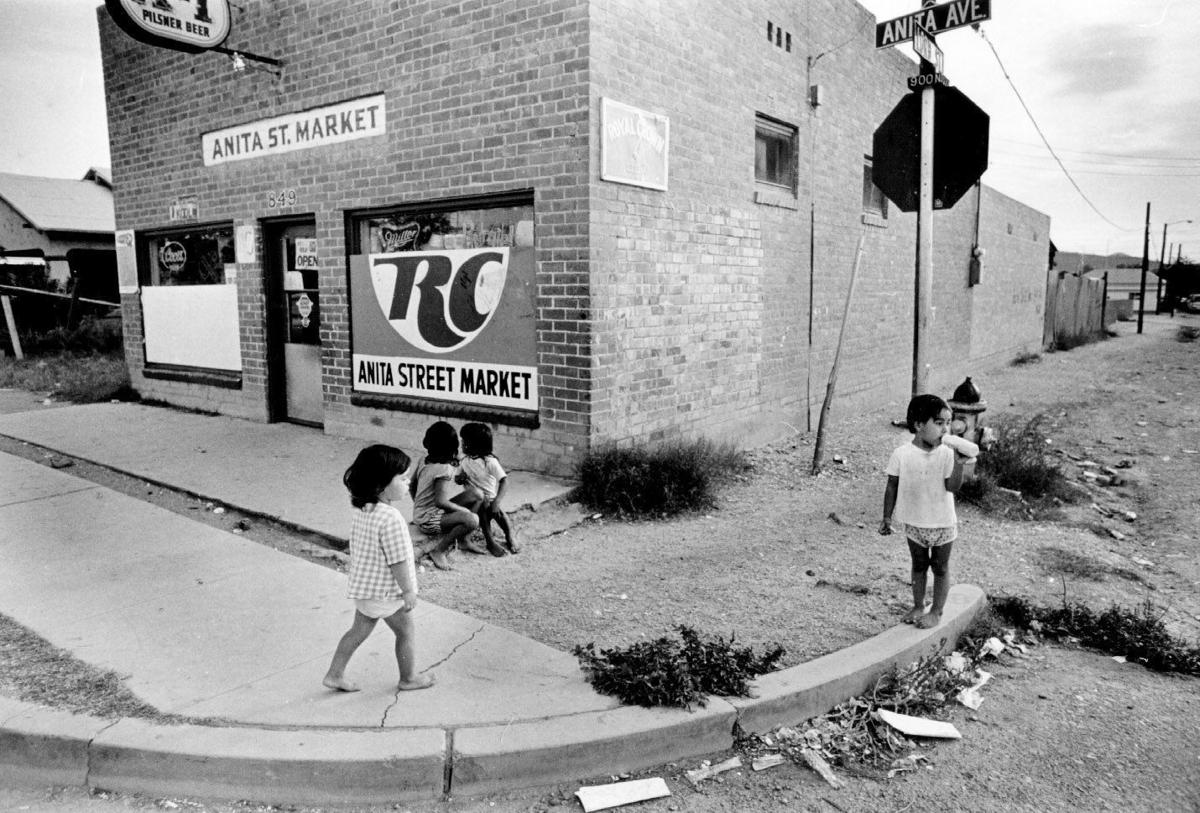 Young children hanging Anita Street Market in Barrio Anita. The store is a familiar spot for tortillas and Mexican food but originally it was a Chinese owned store, one of several in the small neighborhood north of downtown. 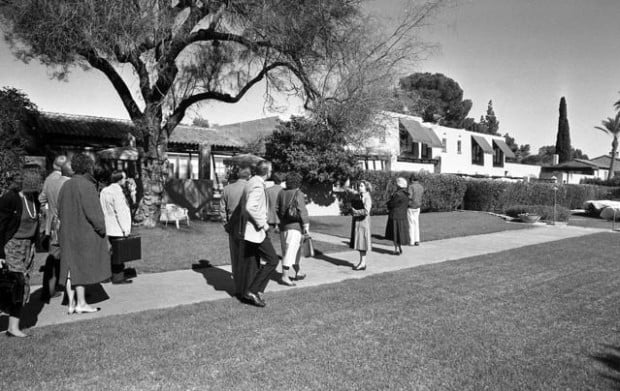 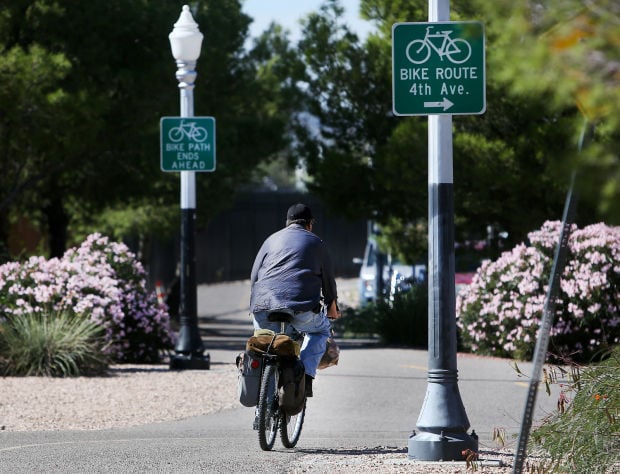 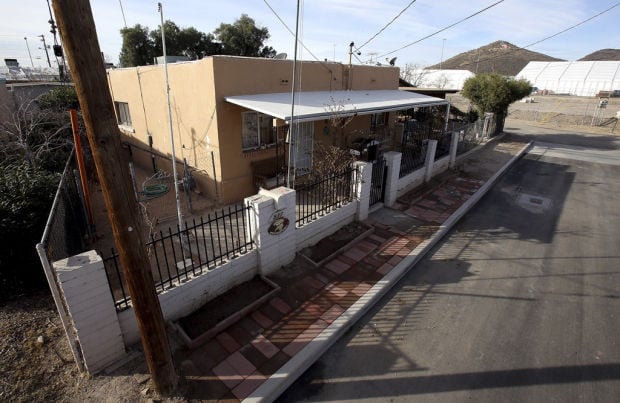 Alice Galvan and her son, Fernando Antonio Galvan, live in this home in Barrio El Hoyo. Members of the Galvan family have lived in the area at the west end of Barrio Viejo since the 1920s. 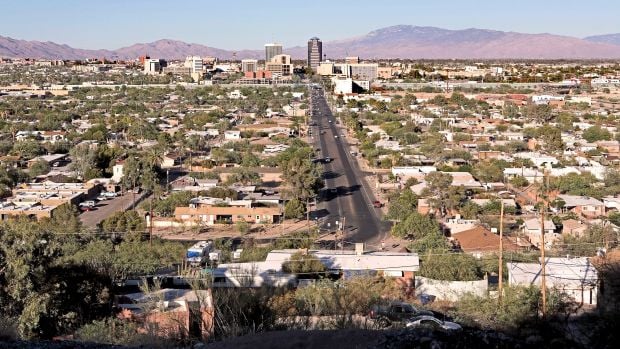 Homes spread out North and south of Congress St. across the Menlo Park neighborhood at the foot of "A" Mountain on the west side of downtown Tucson on Wednesday, June 26, 2013 in Tucson, AZ. This view looks east down congress from S. Panorama Circle. 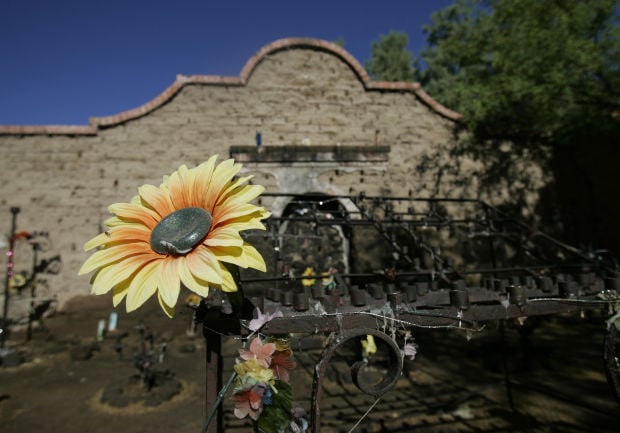 We have evidence of agricultural settlements on the Santa Cruz River that date back to around 1,000 B.C. and we know the Hohokam thrived between 200 and 1450 A.D., according to the City of Tucson's site.

We just celebrated Tucson's 242nd birthday last weekend — a date that commemorates the establishment of the Presidio in 1775. Then, we became part of Mexico in 1821 and joined the U.S. after the Gadsden Purchase in 1854.

Tucson has about 30 historic neighborhoods. That means many of us live, work and play in districts ensconced in history.

We're willing to bet there's a lot you didn't know. We skimmed the documentation created when districts apply to the city for that historical designation. We also perused a 2015 "Guide to Tucson's Historic Neighborhoods" put out by the Blenman-Elm Neighborhood Association.

Take note: These are not necessarily the most important facts about each of these neighborhoods. Instead, we went with the details that stuck with us.

You've probably strolled Winterhaven, bundled up, oohing and aahing at holiday lights galore. The neighborhood, in fact, was developed in the 1950s with a Festival-of-Lights style display in mind. Developer C.B. Richards visited something similar in Beverly Hills in the 1930s and kept the Christmas theme in mind while designing Winterhaven. Hence, the enormous pine trees and Christmas Avenue. Richards wanted to give every street a festive name, but the City of Tucson said no. The neighborhood was designed to emulate the Midwest, with its big lawns and curving streets.

In the late 19th century, this neighborhood straddled Anglo and Hispanic communities at a time when Anglo settlers began to hold more power in Tucson. In the 1920s and 1930s, significant numbers of Anglo, Hispanic and African American people lived in the neighborhood and eventually it became the site of the segregated elementary school Dunbar School.

A lot of important people lived here, including George Martin, who owned a drug store. Even better, Martin owned the Coca-Cola franchise in Tucson in 1911 and often strolled the streets peddling soda from his burro.

A number of Chinese grocers used to operate out of this neighborhood. So did a baseball team — the Oury Park Tigers — who, in the 1930s, could draw out 400 fans for a game at what is now David G. Herrera and Ramon Quiroz Park. Also: Barrio Anita takes its name from its main street named for Annie Hughes, sister to Louis, Thomas and Sam Hughes. Anita is Spanish for Annie.

Isabella Greenway, widow of former Rough Rider John Greenway, opened the Arizona Inn in this neighborhood in 1930. Isabella, close friend to Eleanor Roosevelt, btw, also opened the inn as a way to create demand for her furniture shop that employed World War I veterans.

It's a beautiful day in the #neighborhood. #PieAllen #Tucson

Life here revolved around the railroad, aka the "Iron Horse." In the days before telephone, the Southern Pacific railroad had a rule requiring employees to live within one mile of the railroad so they could hear the whistle summoning them to work. The Iron Horse Historic District is one of five areas that met that one-mile requirement.

AKA Tucson's Disneyland. Just kidding, but in the 1870s, Leopoldo Carillo, who owned most of this property, developed Carrillo's Gardens with an artificial lake, caged animals and space for concerts and dances. A nearby field hosted University of Arizona football games and a Tucson Air Show in 1911. After his death, the gardens became an amusement park called Elysian Grove.

This is where you'll find Tucson's birthplace at the base of "A" Mountain. From the early 1900s to the 1940s, residents could take a dip in the Santa Cruz River. An unfiltered swimming pool in the neighborhood was often drained to irrigate nearby watermelon fields.

This is where you go to experience Tucson in the 1870s. Although the northern part of the neighborhood was demolished in the 1960s, this is still where you'll find Mexican-style streetscapes and the most Territorial-period adobe buildings in the city. Barrio Libre + Barrio El Hoyo + Barrio El Membrillo = Barrio Viejo. This is also where you'll find El Tiradito, a shrine to a sinner shrouded in legends of spurned lovers.

Women of Tucson's past you need to know: Hall of Fame edition

Do you know the backstory of the woman behind the Marshall foundation?

We found our last two women by cherry-picking names etched into stone at the University of Arizona's Women's Plaza of Honor.

March is the month when we celebrate the women who have gone before — those who stood up, sp…

4 women to know from Tucson's past

Badass women of Tucson's past.

30 things to do in Tucson this September

After living through this weird short week of ups and downs we all need a little fun. Let's start this party train!

There's lots to learn, even if you live here.