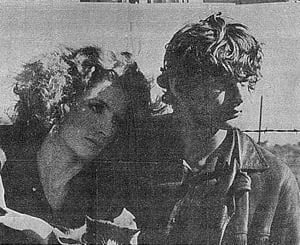 In November 1967, pop-artist Andy Warhol was in Tucson preparing to film a movie at Old Tucson and at Rancho Linda Vista in Oracle, where he was staying. While here, Warhol screened one of his “underground” movies at a local film series. The movie was not well received by the audience.

Known more for his art works such as the Campbell Soup can painting and his series of paintings of Marilyn Monroe, Warhol showed his movie at the Tucson Jewish Community Center’s Cinema I Film Series.

But, following the movie’s screening, the crowd let the director know what they thought of the film and they had not been impressed. A duel of Letters to the Editor ensued as readers debated the behavior of both the artist and the crowd.

Defending the crowd, one writer declared that the audience was far from “unmannerly or stupid.” As for the speaker’s attire, she wrote “For shock treatment he (Warhol) and his manager, Paul, and girl, Viva, were dressed like slum children.” She concluded “The after-image for many of us was that in an ‘awful’ Charles Addams’ sense, he was really a very funny man.”

Warhol returned to Tucson, in early 1968, to start filming. The movie was released as “Lonesome Cowboys,” but its working titles had included “The Unhappy Cowboy” and “Oracle.” Loosely based on Romeo and Juliet, it starred Viva and Tom Hompertz.

Viva as Juliet and Tom Hompertz as Romeo.

Viva, a former Vogue model, was the only woman in the cast. She told a Star reporter she regretted that she had not made it to Nogales for some turtle soup, which she heard was delicious. But, she did dine at El Charro several times and danced flamenco to the mariachi music.

According to Viva, “Lonesome Cowboy” “is about nothing or about everything. It all depends on how you look at it.”

Witnesses told officers the drivers of two vehicles exchanged gunfire then drove away.

Coronavirus cases in Arizona, mapped by county: May 16

UPDATES: Tucson area coronavirus developments, May 23: Here's what we know

The woman faces DUI and aggravated assault charges in connection with the fatal crash.

Tucson's Cactus Drive-in is screening "Grease" on May 29

The movie "Grease" on an outdoor screen? Tell me more, tell me more...