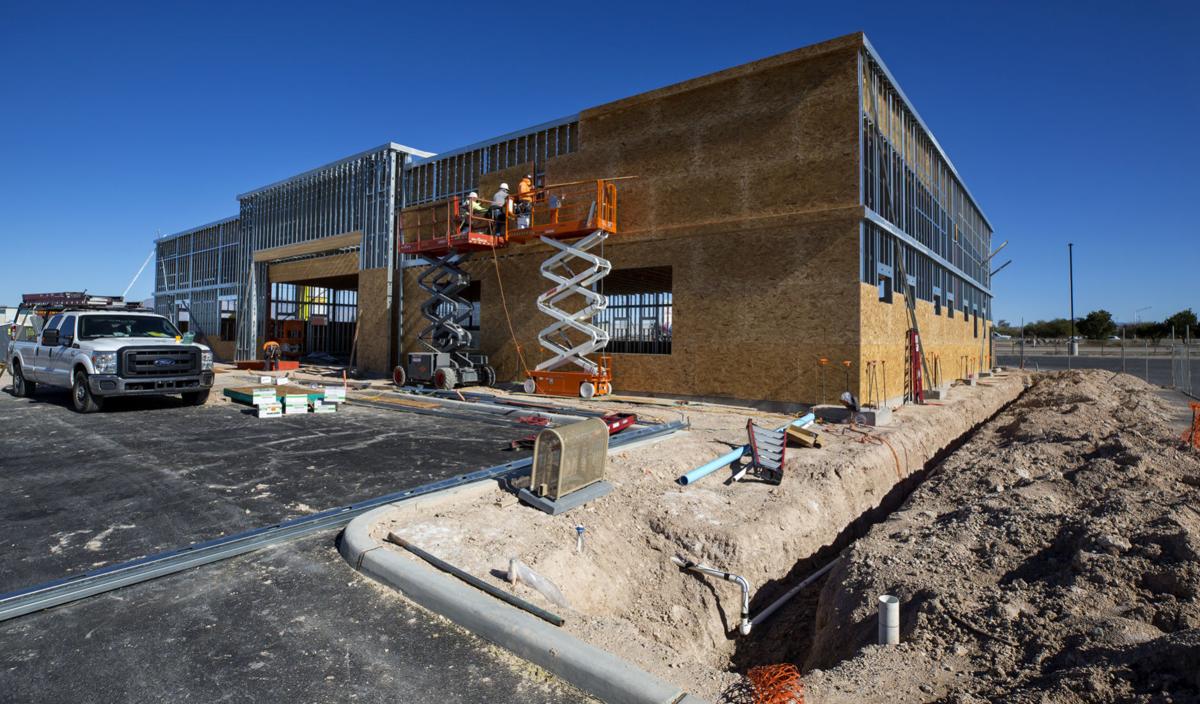 The city of Tucson says the proposed fee increases simply end a five-year discount that was intended to aid in the recovery of Tucson’s commercial sector. Here, crews with Barker Contracting work on The Landing shopping center at West Irvington and I-19.

Expressing concern, Michael Guymon of the Tucson Metro Chamber said he would prefer to see efforts aimed at “easing the burden for those companies to enter the market and create jobs.”

Tucson’s ability to attract new retailers could take a hit due to a proposal that would double fees for new commercial retail projects and free-standing discount stores.

Officials say the proposed new rates eliminate discounts that were put in place during the recession. The proposal also more properly categorizes fees charged for certain projects, such as hotels and churches.

“Each type of business is assessed based on what kind of demand they create on the system,” said Elisa Hamblin, principal planner with the city of Tucson. “Commercial projects put greater demand on streets, whereas office projects don’t because most people stay there all day.”

The proposed fees for retail developments, which would not impact existing businesses, are the highest, going from $4,811 to $9,603.

“The reason the increase looks so large on the commercial side is because five years ago mayor and council adopted new fees and we were still in recovery so they gave a discount to commercial projects,” Hamblin said. “Those fees never increased after that so they’ve been getting a discount for five years.”

The one-time impact fees collected by the city are used to expand roads, parks, police and fire services.

But some fear the large increase for retail could make Tucson less appealing for stores looking to enter or expand in the city.

“My initial reaction after looking at the fees is the commercial and retail sectors are a concern,” said Michael Guymon, vice president of the Tucson Metro Chamber. “Any time we’re easing the burden for those companies to enter the market and create jobs, that’s a success.”

Since the majority of the city’s revenue comes from sales tax, officials should weigh the impact of such large increases, Guymon said.

“Just like a lot of things in life, things like this should be based on data and if the data justifies it, then so be it.”

Aside from the increases for retail projects, the city proposal would also increase rates for light industrial and hospitals. A fee reduction is proposed for manufacturing, warehousing, office, schools, religious facilities and assisted living/nursing homes, and a hotel category would be added.

The City Council will have a hearing on land use and infrastructure improvement plans on Jan. 22 and will review accompanying impact fees in April.

Upward pressure on the Tucson area’s rental prices are keeping investor interest strong as new construction of multifamily units have been slow to come online.

The building occupied by Boot Barn since 1985 sold for $1.7 million.

The city of Tucson says the proposed fee increases simply end a five-year discount that was intended to aid in the recovery of Tucson’s commercial sector. Here, crews with Barker Contracting work on The Landing shopping center at West Irvington and I-19.

Expressing concern, Michael Guymon of the Tucson Metro Chamber said he would prefer to see efforts aimed at “easing the burden for those companies to enter the market and create jobs.”