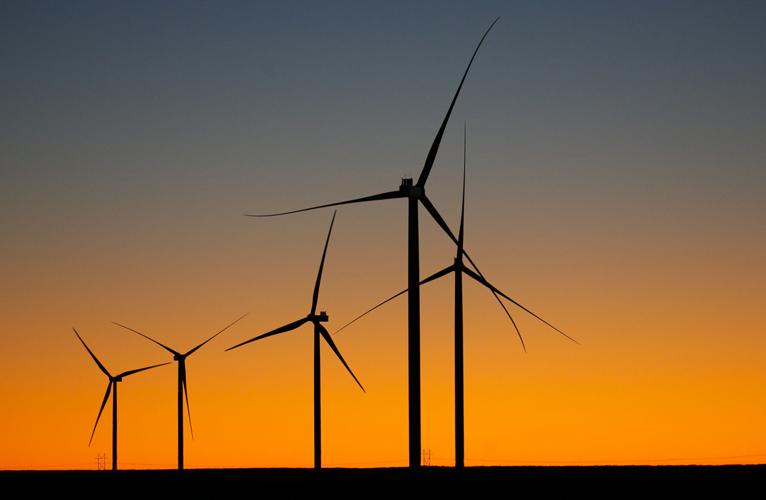 Tucson Electric Power will own the 250-megawatt Oso Grande Wind Project near Roswell, New Mexico, where wind turbines are seen here at sunrise. The wind farm is expected to go online in early May and supply enough energy to power 90,000 homes. 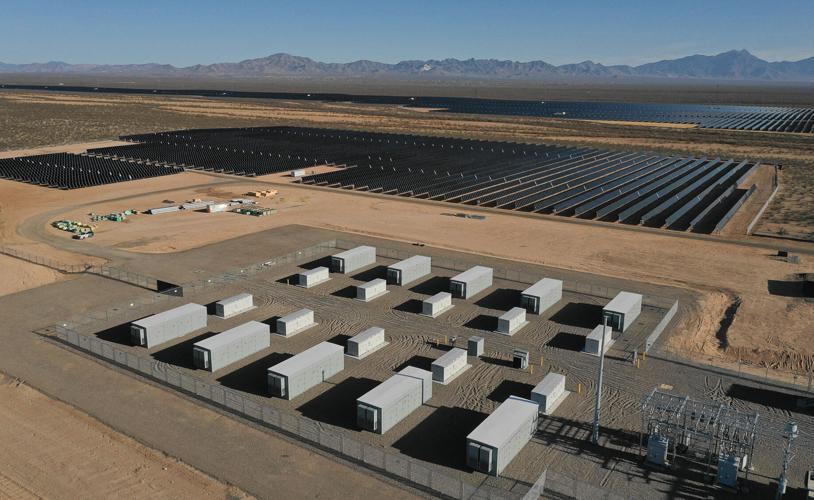 A 30-megawatt battery storage facility can be seen with solar panels in the background at the Wilmot Energy Center on South Swan Road.

The electricity powering most of Tucson, including the University of Arizona, will get a little cleaner this week, as Tucson Electric switches on its biggest solar and wind power plants to date.

Over the weekend Tucson Electric Power Co. planned to turn on its biggest solar generating resource, the 100-megawatt Wilmot Energy Center on the city’s southern fringe.

The massive, 1,130-acre project, built and owned by NextEra Energy, includes 30MW of linked battery storage to bank solar power for use when the sun goes down.

And within the next week or two, TEP’s biggest renewable energy resource, the 250MW Oso Grande Wind Project in New Mexico is expected to go online and start providing power to TEP customers.

TEP has dedicated a portion of its output to provide the UA campus with “100% clean energy,” under an agreement announced in 2019.

“These systems more than double our large-scale renewable energy resources and represent a big step toward the cleaner, greener grid we’re building for our community,” said Susan Gray, TEP’s President and CEO. “We’re taking decisive action on behalf of our community to protect our climate.”

With both Wilmot and Oso Grande online, TEP will have 628MW of large, community-scale wind and solar resources — with one more scheduled to come online soon.

The 99MW Borderlands Wind Project, being built about 100 miles south of Gallup, New Mexico, is expected to be in service by the end of 2021.

The new solar and wind farms will help TEP toward its goal of generating 70% of its power from renewables and cutting its carbon emissions by 80% by 2035, as it retires its legacy coal plants in stages.

But even with Wilmot and Oso Grande online, TEP will still only derive about 25% of its power from renewables.

“We have more work to do,” TEP spokesman Joe Barrios said, adding that the company has no new renewable-energy projects on the drawing board right now.

TEP has been focused mainly on getting the latest solar and wind projects up and running, but will be issuing new requests for project proposals in the future, he said, adding that the company also gets approached by renewable developers and landowners with project ideas.

Environmental advocates have applauded TEP’s progress in moving away from coal-fired power generation, which is a major contributor to carbon-dioxide emissions that have been found to cause global warming and long-term climate change.

But groups including the Sierra Club have opposed TEP’s purchase of more natural-gas generators, which the utility says are needed to provide baseline power on demand when solar and wind plants aren’t producing.

“We are pleased to see TEP add additional renewable energy to its portfolio,” said Sandy Bahr, director of the Sierra Club Grand Canyon Chapter. “Moving rapidly from coal and gas to renewable energy and increased investments in energy efficiency are key to addressing the climate crisis, cleaning up the air, better protecting our health, and reducing water use. TEP should exit out of coal and gas as rapidly as possible.”

Bahr said many studies have indicated that replacing its remaining coal plant generation with wind, solar, and solar plus storage will benefit ratepayers.

TEP has disputed studies showing a rapid shift to renewables will save ratepayers money, contending they haven’t accounted for all the costs involved.

But the utility does not oppose draft Arizona Corporation Commission rules that would mandate state-regulated utilities get 100% of their energy from carbon-free sources including solar, wind and nuclear, by 2050.

Not everyone thinks TEP should shift to renewables, even at its current pace.

Consumer groups such as AARP Arizona say they worry that a rapid shift to renewable energy will increase electric rates beyond affordability for lower-income customers.

While acknowledging that coal is no longer the lowest-cost energy resource, TEP says it still provides cost–effective capacity, reliability and related services.

TEP is buying power from the Wilmot Energy Center under a 20-year contract with NextEra for less than 3 cents per kilowatt hour, plus 1.5 cents per kWh for stored energy — believed to be a record-low price when TEP announced its agreement with NextEra in 2017.

The solar plant will immediately create seven new full-time jobs at TEP, with another one possible in the near future, Barrios said.

The project will also employ a dozen full-time contractors performing service and maintenance for the first two years of operation, and TEP expects to have about 18 full-time positions when it takes over maintenance and operations in two years.

San Diego-based EDF Renewables North America is developing Oso Grande for TEP, which will end up owning the project through a “build and transfer agreement” at a cost of about $370 million.

Meanwhile, TEP is on track to retire more than 600MW of coal generation by June 2022 through recent and scheduled closures at the Navajo and San Juan Generating Stations.

The utility also receives some power from two units at the Four Corners Generating Station that are scheduled to close in 2031.

TEP will still be using the coal-fired Springerville Generating Station in northeast Arizona, which it owns and operates with nearly 400 workers.

But starting in 2023, TEP plans to begin transitioning Springerville to seasonal operations, idling one of the plant’s two roughly 400MW units during cooler months and using both units to meet heavy summer demand.

The 20-year green-energy agreement between TEP and the UA — called the biggest of its kind in North America — will enable the school to offset all of the greenhouse gas emissions associated with its purchased electricity, said Trevor Ledbetter, director of the Office of Sustainability at the University of Arizona.

“Building a sustainable future is one of the University’s strategic priorities, and this project will have a huge impact in reducing our carbon emissions,” UA President Robert C. Robbins said.

The Wilmot Energy Center is expected to generate enough energy to power the equivalent of about 26,000 typical TEP homes, Barrios said.

The Oso Grande wind project, consisting of 62 wind turbines on 24,000 acres near Roswell, has completed testing and is in the process of filing final federal regulatory paperwork before going online, Barrios said.

Oso Grande is expected to generate enough energy each year to serve about 90,000 homes, TEP says.

Home customers will be paying an average of about $5 more per month, but more will qualify for Tucson Electric's low-income rate program.

New TEP plan ends coal use by 2032, ratchets up renewables use

A strong showing by the company’s defense units, including Tucson-based Raytheon Missiles & Defense, offset an ongoing slump in commercial…

Tucson Electric Power and Arizona Public Service proposed a grand plan to put a million EVs on the road in Arizona by 2030, but critics say it…

A plan by California's grid operator to limit power exports to other states could jeopardize Arizona's ability to get emergency power.

After killing a proposed mandate for 100% carbon-free power by 2050, the Arizona Corporation Commission voted to reach that goal by 2070.

For Star subscribers: The estimates on how much power bills could rise vary widely under a plan to move Arizona to 100% carbon-free energy.

No injuries were reported due to the fire at Tucson Electric Power Co.'s plant on East Irvington Road, and crews were working to restore power.

Town halls to focus on aid utilities, including Tucson Electric, can give to the Navajo Nation and others facing economic losses due to plant …

For Star subscribers: A wind farm proposed in the high desert about 30 miles north of Tucson, has drawn swift opposition from Southern Arizona…

Tucson Electric Power will own the 250-megawatt Oso Grande Wind Project near Roswell, New Mexico, where wind turbines are seen here at sunrise. The wind farm is expected to go online in early May and supply enough energy to power 90,000 homes.

A 30-megawatt battery storage facility can be seen with solar panels in the background at the Wilmot Energy Center on South Swan Road.