Deputy Tom Peine demonstrates the Multiple Interaction Learning Option system, a virtual reality training device that projects a scenario onto screens surrounding trainees. In this scenario, a woman threatens to hurt a baby or Peine with a knife. 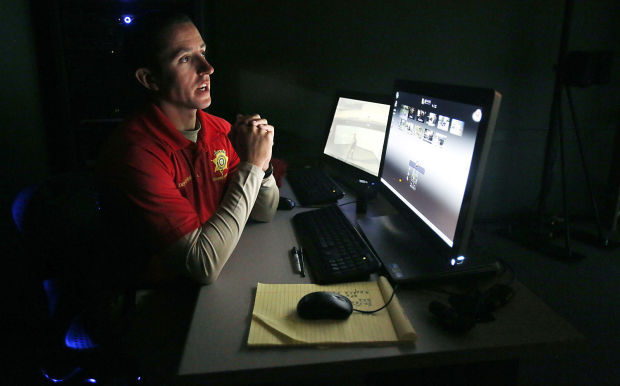 Deputy Jesse Comeau, a training instructor with the Sheriff’s Department, demonstrates the MILO system. Officers are evaluated on their performance in the simulations.

A driver hops out of a black SUV parked in a large lot. Immediately, she begins yelling and making threats at a deputy standing in front of her, while her baby is crying in the car.

Pima County Sheriff’s Deputy Tom Peine faces the woman from a few feet away. “Don’t move,” he says. He is on guard, but remains calm as he tries to persuade the woman to step away from her vehicle.

The woman does not comply. Instead, she walks back to the car and grabs the baby. Then she pulls out a knife and waves it threateningly.

This is not a real situation. In reality, Peine is standing in the middle of a darkened room, surrounded by five massive screens, projecting an interactive video of the woman with a knife.

“For us the challenge is always to provide realistic training environments, and at the same time do that at a reasonable cost with the most possible safety,” Peine, a department spokesman, said. “The MILO system does exactly that.”

The new $115,000 system, which was paid for by the Pima County risk management, uses connected flat-screen displays, which are used to simulate a variety of scenarios, ranging from a suspicious man in a parking lot to burglary in a factory to more hostile situations.

“We have to sometimes train for what is typically thought of as unthinkable,” Peine said.

Deputies must learn to adapt to situations and respond with an appropriate level of force, using infrared laser weapons designed to look and feel like the real ones used by law enforcement, said Deputy Jesse Comeau, a training instructor.

While in simulation training, deputies are watched closely for their level of force, communication skills, stance and situational awareness, he said. “Deputies are held accountable during the scenarios,” he said.

A mistake during the simulation training could lead to a tragic situation in virtual reality and risk the life of a bystander, a victim or the officer. The scenarios are designed to produce multiple outcomes based on a deputy’s reaction.

A mistake in real life could cost actual lives.

Each session, which lasts about a minute, is followed by a debriefing, in which instructors and deputies analyze the tactics used while viewing a playback of the scenario and the deputies’ reactions.

“It looks like fun, but if you take it seriously like you’re supposed to, then it’s stressful,” said Peine.

Deputy Tom Peine demonstrates the Multiple Interaction Learning Option system, a virtual reality training device that projects a scenario onto screens surrounding trainees. In this scenario, a woman threatens to hurt a baby or Peine with a knife.

Deputy Jesse Comeau, a training instructor with the Sheriff’s Department, demonstrates the MILO system. Officers are evaluated on their performance in the simulations.