La Placita Park, which was on West Broadway near South Church Avenue, was surrounded by several businesses including El Charro restaurant and the Ronquillo’s Bakery. 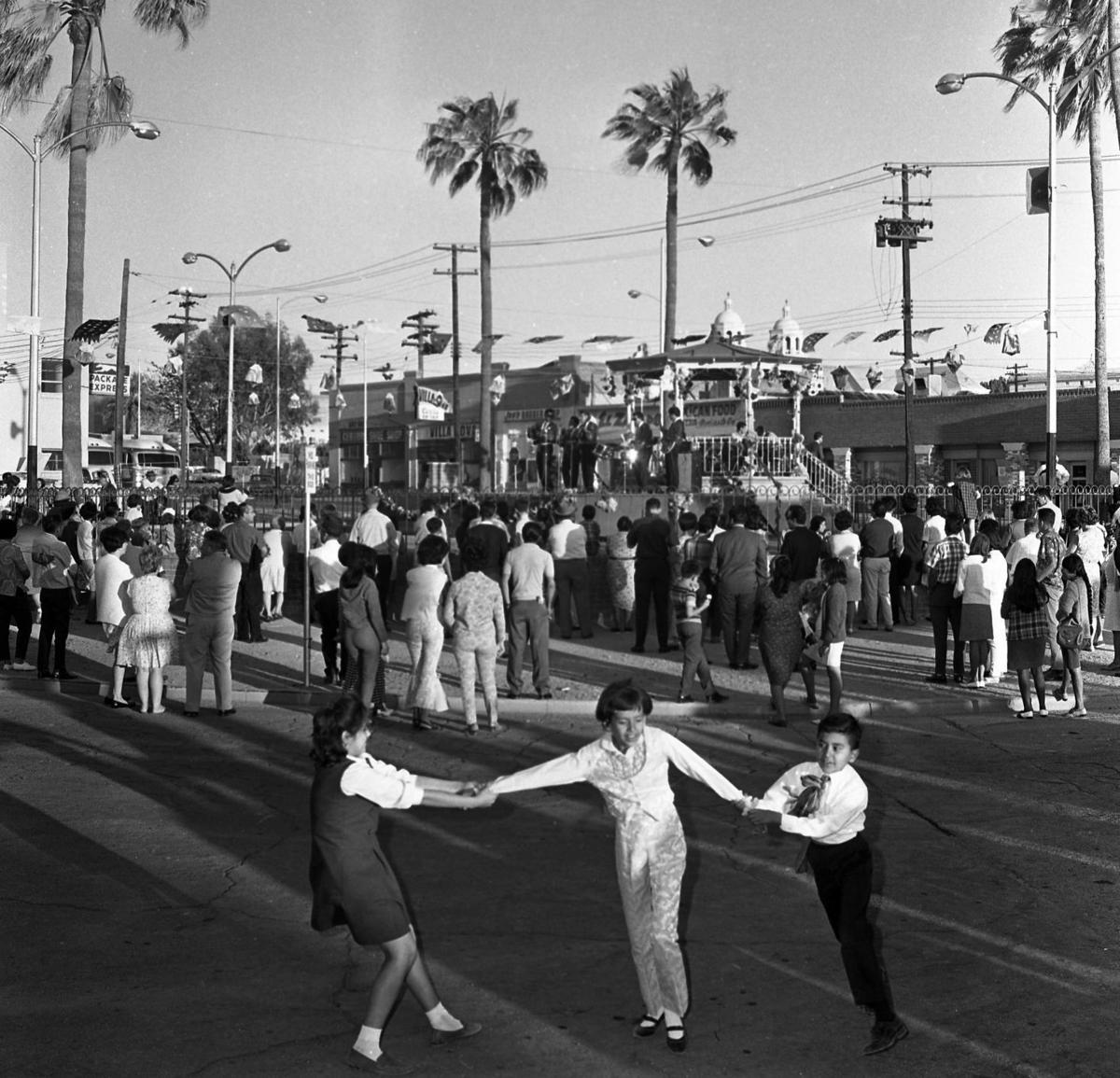 Growing up in Barrio Kroeger Lane at the foot of Sentinel Peak, Lydia Otero and her family frequently visited la calle, the old downtown barrio where her parents were born.

But to many Mexican and Chicano families living in and around downtown, la calle was the commercial hub along South Main Avenue. La calle, just south of downtown, was the heart of Tucson's Mexican-American community.

It was that way until the city, in concert with Tucson's elite in the late 1960s, razed la calle, wiping away more than 100 years of history and the presence of generations of Mexican families.

"La Calle" is now the name of a book by Otero, an associate professor in the University of Arizona's department of Mexican American and raza studies.

Published by UA Press, "La Calle" documents the complicity of the city, Tucson's tourism boosters and other institutions such as the Arizona Historical Society, the Catholic Diocese of Tucson, and the Tucson Citizen and Arizona Daily Star, to remove the businesses and homes, including the ancestral house of Otero's family, in an 80-acre section of downtown.

The episode remains a painful reminder for many families who were forced to relocate or sell their property at low prices.

Urban renewal, as it was called back then, was done in the name of "progress" and to eliminate a "slum." In its place the city would eventually build the Tucson Community Center, as it was named in 1971, which was followed by La Placita Village, a commercial center at West Broadway and South Church Avenue.

Ironically, despite the city's claims that urban renewal would be an economic boom, the TCC drained the city's coffers and La Placita Village became a white elephant.

Otero used city archives, newspaper accounts and first-person interviews of barrio residents to show the systematic eradication of the barrio and efforts to replace it with a place "where singers, athletes, Boy Scouts, square dance people and others can come."

At the center of Tucson's urban renewal was the question of "what looks American and doesn't look American," said Otero, who graduated from Pueblo High School.

In the decades leading up to the 1960s, Tucson's government and business interests spun the narrative that the Mexican neighborhood was a public eyesore, impoverished and riddled with crime. Into that story line, tourism boosters weaved another: Tucson was a Western town, in the Hollywood image of friendly, singing, blond and blue-eyed cowboys.

But the barrio, where low income Mexicans, blacks, Native Americans, whites and Chinese lived in Sonoran row adobe homes, clashed with the idyllic image spun by the Tucson Chamber of Commerce and the Sunshine Club. As early as the 1940s, Tucson government and special interests had its sights on the barrio, said Otero.

By the 1960s la calle was run down. Many property owners were absentee landlords, and the city began tearing down structures, leaving empty, weed-strewn lots, Otero said.

The slum had "become a self-fulfilling prophecy," she added.

On March 1, 1966, voters approved a multimillion bond proposal that gave the city the green light - and money - to buy and condemn barrio property. Only 55,000 property owners were allowed to vote and of those, 17,427 voted; 10,193 voted yes, less than 4 percent of the city's population, Otero wrote.

"La Calle," however, is about more than the city's chicanery and deception. It's about residents who became historic preservationists and challenged the city and its power structure.

While the barrio was lost, residents and preservationists saved the small kiosk in the historic downtown Plaza de la Mesilla, the symbol of Tucson's Mexican culture. Beyond that, Otero wrote, the saving of La Placita, as the kiosk area is called, set in motion the adoption of the city's historic preservation code, which remains today.

While some Tucsonans insist today that the city's action was proper and transparent, "La Calle" reveals the opposite.

"I want the book to tell the story and let people take the facts I presented to make up their own minds," said Otero.

UA Press will hold a book-release reception next Sunday from 2 to 4 p.m. at Mariscos Chihuahua, 1009 N. Grande Ave. It's open to the public.

Ernesto Portillo Jr. is editor of La Estrella de Tucsón. He can be reached at 573-4187.

Woman managed to get away from boyfriend during assault and asked for help from bystander, Tucson police said.

Political parties have no legal right to observe extra audits that counties perform on election equipment beyond those required by state law, a judge ruled Tuesday.

The man died after patrons at the bar, at 5244 S. Nogales Highway, reported someone shooting into the air in the parking lot and security guards rushed outside.

David Scott Anderson was found with gunshot wounds in street; he died later at Tucson hospital.

Even within Arizona, the differences are stark between the border near Tucson and the border near Yuma, where thousands of adult migrants and families are coming from countries like Cuba, Venezuela, and Brazil, data show.

Coronavirus cases in Arizona, mapped by county: May 3

Emory Webster cried tears of joy when her new communication device arrived from the state after 18 months of waiting. But six months later, she’s still waiting for parts she needs to use it.

A judge said he has yet to be convinced the rights of Maricopa County voters are being protected in the audit of the presidential election by state Senate Republicans. He rejected claims that senators are constitutionally immune from being sued over it.

La Placita Park, which was on West Broadway near South Church Avenue, was surrounded by several businesses including El Charro restaurant and the Ronquillo’s Bakery.