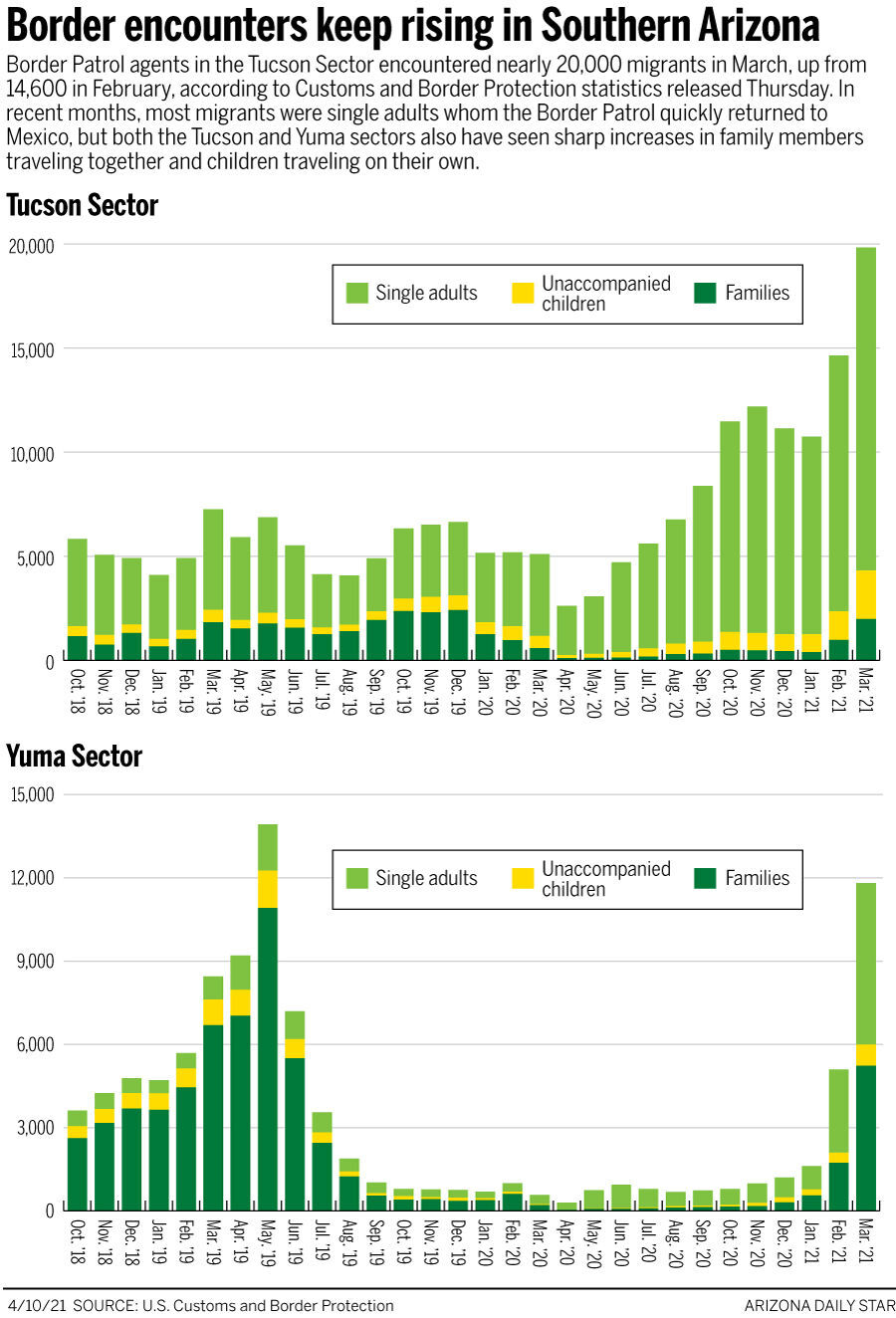 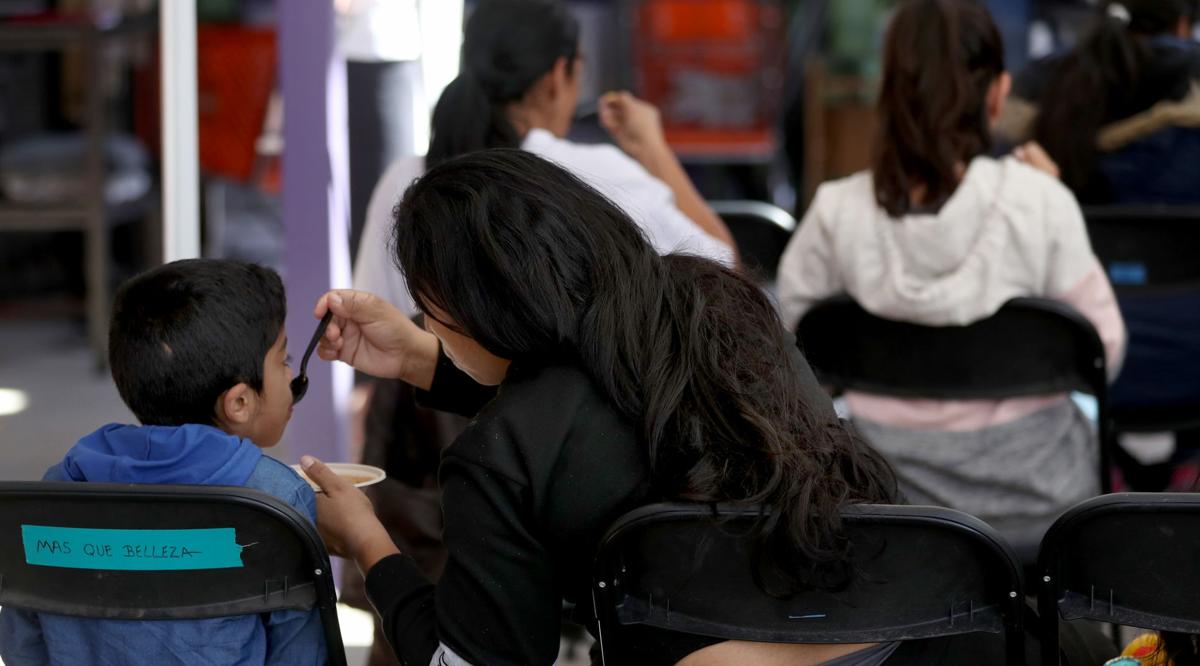 The FEMA funds will cover costs related to food, shelter, transportation within the county, as well as for medical care.

Border Patrol agents in Southern Arizona are seeing a steady increase in the number of migrants they encounter each month, figures released this week show.

Agents in the Border Patrol’s Tucson Sector encountered about 19,800 migrants in March, up from about 14,600 in February.

Agents in the Yuma Sector encountered about 11,800 migrants in March, up from about 5,100 in February, according to Customs and Border Protection statistics released Thursday.

Adult migrants traveling without children accounted for the majority of the encounters last month in Arizona, but Border Patrol agents continued to see a sharp increase in families traveling together and children traveling on their own.

The increase in border “encounters,” a term recently adopted by CBP officials to include migrants apprehended while crossing the border clandestinely and migrants who seek out officials to ask for asylum, began last spring and accelerated in the past two months, according to CBP statistics. So far, most of the encounters have been along Texas’ border with Mexico.

Administration officials said this week that “the number of encounters at the border has been rising since April 2020 due to reasons which include violence, natural disasters, food insecurity, and poverty” in Mexico, Guatemala, Honduras and El Salvador.

Republican officials who visited the border recently, including Gov. Doug Ducey, say the rise in border encounters is the result of President Biden rolling back some of former President Donald Trump’s policies, such as the Migrant Protection Protocols that forced thousands of asylum seekers to wait in Mexican border towns for a chance to speak with U.S. officials.

One key policy Biden maintained from the Trump administration was a public-health order known as Title 42 that allowed the Border Patrol to quickly expel hundreds of thousands of migrants to Mexico.

CBP officials say the policy is necessary to avoid spreading the coronavirus among agents and at immigration detention centers. Critics of the policy say it is being used unlawfully to block migrants from asking for asylum.

As a result of Title 42, some migrants quickly try again to cross the border after they are expelled. Administration officials said 60% of the encounters along the U.S.-Mexico border in March were Title 42 expulsions. Of those expelled, 28% already had been expelled under Title 42.

The Border Patrol uses the Title 42 health order far more in the Tucson Sector than in the Yuma Sector, according to the statistics CBP released Thursday, which for the first time provided information about how Title 42 is used in each Border Patrol sector.

In the Tucson Sector, the Border Patrol expelled about 68,700 migrants to Mexico under Title 42 since Oct. 1, the start of the federal fiscal year and the earliest date for the new statistics. Among them were about 3,500 who were traveling as families, including about 1,900 from Guatemala and more than 500 from Honduras.

In the Yuma Sector, the Border Patrol expelled about 7,700 migrants to Mexico under Title 42 since Oct. 1, including about 2,300 who were traveling as families. Among the families were about 800 migrants from Guatemala and 700 from Honduras.

About 13,800 migrants in the Yuma Sector were processed for immigration violations, with the vast majority listed as being from countries other than Mexico, Guatemala, Honduras or El Salvador.

Pima County officials are evaluating whether the Curley School gymnasium in Ajo could be used to temporarily house asylum-seeking families after they are released by the Border Patrol.

Since March 18, the county has helped transport 552 asylum seekers from Ajo to the Casa Alitas shelter in Tucson, said a Friday memo from County Administrator Chuck Huckelberry. Most of the families are from Brazil, Venezuela and Cuba.

Federal agencies told county officials they expect a "significant increase" in migrants crossing the border and released by the Border Patrol, Huckelberry wrote.

"It is now appropriate that we begin to consider larger shelter facilities that may be in addition to the shelter capacity now provided at Casa Alitas," he wrote.

County officials are evaluating what type of capital improvements would be necessary to "bring the Curley School gymnasium in Ajo up to the same standards that now exist at Casa Alitas shelter," Huckelberry wrote.

The Federal Emergency Management Agency likely will provide a "significant sum" to offset the county's costs for transporting and housing asylum seekers, he wrote.

Border Patrol officials "ruled out" a recent request from county officials for the Border Patrol to release asylum-seeking families at the agency's station in Why, Huckelberry wrote.

Federal report finds a lack of hygiene products, a "critically understaffed" medical unit and that ICE detainees reported excessive use of force at La Palma Correctional Center in Eloy.

Border wall construction remains paused in Arizona and elsewhere along the U.S.-Mexico border, even though the Biden administration’s 60-day e…

The change marks a shift in how the agency deals with more families crossing the border, and forced local officials to hustle to find transportation for the migrants.

Food, shelter and medical care for families seeking asylum will be covered with $2.1 million coming from the Federal Emergency Management Agency to Pima County.

Construction underway at migrant shelter on Tucson's south side

Work is proceeding at a brisk pace at a CBP facility for migrants being built on Los Reales near Swan Road, scheduled to open in late April or early May.

Declaring an emergency, Arizona's Republican Gov. Doug Ducey said he intends to provide $25 million in initial funding from the state for the guard deployment to the border.

The FEMA funds will cover costs related to food, shelter, transportation within the county, as well as for medical care.