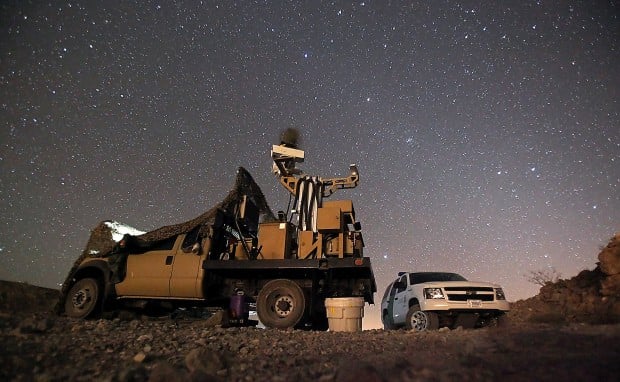 A. U.S. Border Patrol truck-mounted mobile surveillance system perches atop a hill near the border in Naco. The unit combines radar, a daytime camera and a thermal night camera with GPS to help track illegal border traffic at night. 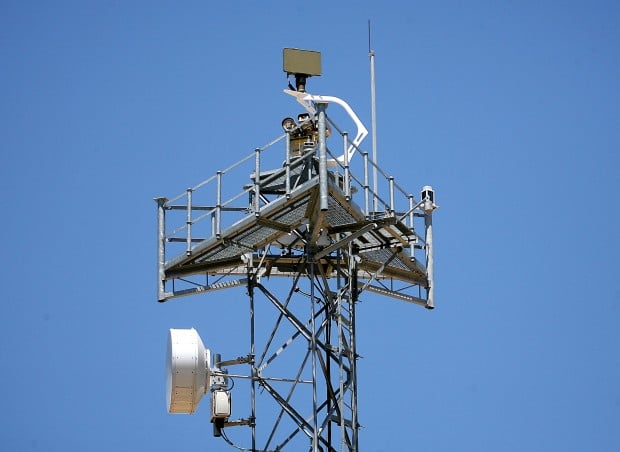 This SBInet tower system is still being used for border security near Highway 286 and Arivaca Road, about 12 miles north of Sasabe. 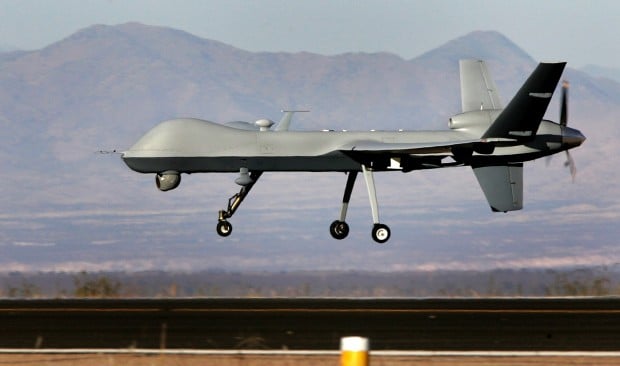 A Predator B drone used for border surveillance prepares to land at Fort Huachuca in Sierra Vista. 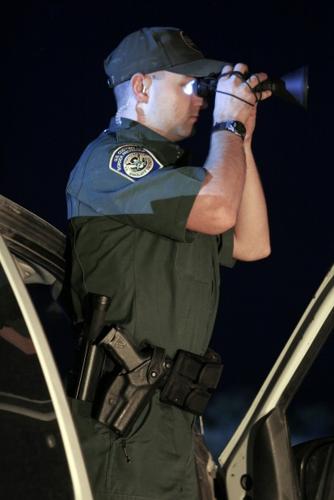 The electronic virtual fence proved to be expensive and inefficient, so Homeland Security is trading Star Wars for simplicity in its latest border technology strategy.

Instead of a one-size-fits-all network of camera and radar towers, the agency will tailor unique plans for the different stretches of the geographically diverse, 2,000-mile U.S.-Mexico border by choosing from a menu of technology.

Most of the options are already being used on the border: truck-mounted surveillance systems, night-vision goggles and towers with day and night cameras. But now they will be brought together more cohesively in a plan to be rolled out first in Arizona - the busiest stretch of border for the last decade.

Plenty of money will still be spent - it will cost an estimated $750 million to blanket Arizona's 378 miles of border with technology over the next three to four years, officials said. But that money will be spread among several companies, said Customs and Border Protection Commissioner Alan Bersin. That's different from the "SBInet" virtual fence initiative, which had Boeing as the prime contractor.

The new blueprint suggests that officials have learned from past failures, but many remain skeptical based on the lack of return on the colossal investments of the past 13 years.

Despite spending about $1 billion from 2005 to 2011, SBInet was plagued by glitches and delays, and produced only two working systems covering 53 miles of border in Arizona. In a series of scathing reports, the Government Accountability Office repeatedly questioned whether the time and money spent were a prudent use of limited resources. In January, Homeland Security Secretary Janet Napolitano canceled the program.

"The notion of one virtual fence and the concept of one Star Wars command and control center is a concept the secretary has rejected as impracticable and frankly, one that was not cost-efficient," Bersin said.

Before SBInet, Homeland Security and its precursors spent $429 million from 1998 to 2005 on border surveillance systems that were set off by the movement of animals, trains and wind, the department's office of inspector general reported in 2005.

"Every time a program fails, they change the name," said Robert Lee Maril, a professor of sociology at East Carolina University who wrote a book about the previous failures. "They tend to never admit there are any mistakes but then go on and get additional funding for programs that didn't work."

The public distrust is understandable, but this program is based on a mind-set different from the past initiatives, said Mark Borkowski, assistant commissioner for Technology Innovation and Acquisition at U.S. Customs and Border Protection.

"This is not an attempt to create something that isn't there," Borkowski said. "This is an acknowledgement that there is a lot of good capability already available to us that the industry has asserted they could produce tomorrow."

The virtual fence the Bush administration envisioned in 2005 was plagued with problems almost from the start.

Tower-mounted cameras have coverage gaps. The radar doesn't work correctly in bad weather and the towers work only in flat terrain. The software configured by Boeing was proprietary and unable to incorporate newer radar and cameras without significant work and cost, the GAO reported in March.

But perhaps the biggest flaw was the $1 billion price tag. It cost $164 million to put up the two systems in Arizona, and it was estimated it would cost about $1.5 million per month, or about $18 million a year, to operate and maintain both, the GAO said.

There are 15 sensor towers with cameras and radar, and 10 communication towers that transmit signals to computers along 53 miles of Arizona's border. One network is along 23 miles flanking Sasabe and the other along 30 miles near Ajo.

The systems being used are basically stripped-down and "dumbed-down" versions of the original concept, said Maril, author of "The Fence: National Security, Public Safety and Illegal Immigration along the U.S.-Mexico Border."

"That's not much for a billion dollars," Maril said. "Basically now what they have is fancy cameras on the top of tall towers. We've had that technology for a very long time."

Customs and Border Protection officials say SBInet didn't leave them completely empty-handed. The two systems in Arizona will stay up and serve as the backbone of the new tailored plan here. The towers work more than 90 percent of the time and provide agents with images and information they wouldn't otherwise have, officials said.

The GAO backs that, saying in its recent report that the two systems have helped the Border Patrol since they went up last year.

One key lesson learned from SBInet was not to "develop something that doesn't exist if you don't have a good reason to do it," Borkowski said.

Homeland Security has decided instead that it wants something reasonable that can be acquired fairly quickly, he said.

"I'll take 80 percent if I've got it today and I won't waste time waiting for the other 20 percent," Borkowski said.

Since taking the post in October 2008, Borkowski has met with dozens of companies and Department of Defense officials to get a sense of what's already available and what works best. And Napolitano's reassessment of SBInet included interviews with Border Patrol agents.

The latest approach is the one Border Patrol agents have been imploring the agency to take since 1998, Maril said.

As usual along the border, Arizona will serve as the lab.

The agency has broken the state into four areas, tailoring unique plans for each.

The new plan - called the "Alternative (Southwest) Border Technology" - will include a mix of camera towers, truck-mounted mobile surveillance systems, night-vision goggles, ground sensors, handheld equipment for use by Border Patrol agents and towers similar to those put up in the SBInet virtual fence system. Planes, helicopters and unmanned aerial systems will also be incorporated.

The new approach can be seen in the plan for Arizona. Instead of 91 sensor towers as planned in SBInet, there will be 67 towers (counting the 15 already up), and the rest of the terrain will be covered by the other gear.

Most of the equipment for Arizona is to arrive in the next two years, with the new version of the sensor towers arriving in 2013-2015.

There will be more sophisticated night-vision goggles and advancements in the "intelligence surveillance reconnaissance," known as ISR, with ground-based radar synced up to radar attached to planes and unmanned aerial systems, Bersin said.

"Over time, using suites of technology - both land-based and in the air - we will continuously increase the percentage of attempted illegal entries that we detect," Bersin said.

The new plan requires that everything purchased will be under firm, fixed-priced contracts because the technology is already available, and thus the price is set.

All will be open competition with the exception of the portable surveillance systems, to be bought from an existing Army contract, officials said. These include a tripod-mounted long-range infrared sensor, tripod-mounted camera, battery and a laptop. They can be carried by two to four agents into mountainous or remote areas.

Like SBInet, the new program will be closely monitored by the GAO. The investigative arm of Congress plans a report later this year, said Richard Stana, director of homeland security issues at the Government Accountability Office.

The GAO already has expressed concerns about the limited scope of Homeland Security's six-week analysis of border technology and the rationale it used to draw up the new plan. A more "robust" analysis could have led to a different plan, the GAO said.

"For a program of this importance and cost, the process used to assess and select technology needs to be transparent," the GAO wrote. "The uncertainties noted above raise questions about the decisions that informed the budget formulation process."

The agency appears to be making better decisions now, said Maril. But he said he's not ready to declare the new strategy a success, partly because, while the leaders in DHS are new, the agency's inability to manage major contracts is systemic.

"Are we going to end up in another four years with another administration and a new plan, renamed something else?" If so, he said, "we'll be in the same place we were in 1998."

In the latest border technology initiative, officials will tailor plans to fit different stretches of the geographically diverse border by sel…

A. U.S. Border Patrol truck-mounted mobile surveillance system perches atop a hill near the border in Naco. The unit combines radar, a daytime camera and a thermal night camera with GPS to help track illegal border traffic at night.

This SBInet tower system is still being used for border security near Highway 286 and Arivaca Road, about 12 miles north of Sasabe.

A Predator B drone used for border surveillance prepares to land at Fort Huachuca in Sierra Vista.

Night-vision goggles are used by an agent with U.S. Customs and Border Protection.
© Copyright 2023 Arizona Daily Star, PO Box 26887 Tucson, AZ 85726-6887 | Terms of Use | Privacy Policy | Do Not Sell My Info | Cookie Preferences
Powered by BLOX Content Management System from TownNews.com.
You don't have any notifications.