The first day of school in Tucson’s largest school district was officially marked seven months ago, but for Holladay Elementary Principal Tonya Strozier it all came together this week when students returned to campus for the first time since last March.

“We’ve dedicated this whole week to relationships,” she says. “We’re going to get to the learning part of it, but this is all about relationships because yesterday was really the first day of school. … This week is about laying a foundation to last us the rest of the year. And it gives the teachers a chance to build that real rapport. We can’t do this without relationships.”

The fine-arts magnet school on Tucson’s south side opened to students on Monday, March 22, after a year of closure due to the COVID-19 pandemic. Tucson Unified, which serves about 42,000 children, is the last of the city’s major districts to open for in-person learning.

About half of TUSD’s students opted to stick with remote learning. At Holladay, about 45% of the student body, 90 kids, are coming in person.

And the first week back is also the first week of the last quarter, which Strozier says will help get kids who fell behind caught up and lay a foundation for the remediation efforts that many students will need.

Across Tucson, school districts are investing millions in remediation efforts to account for more kids failing classes — with the number of F’s in TUSD’s secondary grades up by nearly 50% at the end of the first semester.

Tucson’s major school districts were allotted around $158 million from the first two federal coronavirus relief packages. And Arizona’s K-12 allocation from the most recent stimulus package, the American Rescue Plan, was $2.5 billion, with the stipulation that schools spend 20% of it on learning loss.

“Kids were never not learning,” Strozier says. “They were just learning in a different way. And so what we really wanted to recognize is that there were some kids who remote didn’t work for them, and we want to start to address those gaps now.”

Many Tucson schools are investing in summer school and other remediation efforts to get kids caught up. Holladay usually has one summer program, but this year it is adding a kinder-ready summer program as well, targeted toward the large number of kindergarteners whose parents decided to hold off for a year because of the pandemic.

Besides remediation efforts, TUSD has invested heavily in technology and COVID-19 safety precautions, spending more than $2.1 million on air purifiers for all classrooms, nurse and counselor offices and common areas, and nearly $3.7 million on things like like personal protective equipment, plexiglass barriers and touchless water dispensers.

“In addition to the millions of dollars we’ve already spent on PPE and technology, I know that this TUSD board is committed to heavy investments that will remediate or even heal the great social, emotional and academic losses that so many students have experienced this past year,” said TUSD board President Leila Counts. “Investing in our school counselors, classroom-size reductions, arts, PE, et cetera are not just quick, temporary fixes but large-scale, structural improvements. The following years’ budgets will be designed to address all of our students’ important and ongoing developmental and academic needs.”

New air purifiers were seen in classrooms at Holladay, along with plexiglass for students’ desks on Tuesday, March 23 — the second day of in-person classes. TUSD would not allow the Star to observe the new learning environments on the first day back. The school has two custodians now instead of one, who do a deep sanitation in every classroom during the day and again in the evening. And the school has interactive TVs in every classroom.

There are routines for drop-off and pickup, mask requirements, staggered release times and lunches — all to keep the kids from crowding. Some teacher aides at Holladay are doing double duty, sitting at desks outside bathrooms so they can assist students learning online from home while also keeping an eye on how many children go into the bathroom at one time.

Inside classrooms, children are typically about 4 or 5 feet apart, with plexiglass placed on desks where there’s less space. Although people have gotten used to the 6-foot rule, the CDC recently changed the guidelines for classrooms to 3-foot distancing as long as everyone is wearing masks.

The return to the classroom has brought changes for teachers and students alike.

Out of TUSD’s 63 elementary and K-8 schools, at 50 campuses some or all teachers are simultaneously teaching remote and in-person students to avoid kids changing classes and teachers. But at Holladay, each grade has one remote teacher and one in-person teacher.

Despite her mask, fourth grade teacher Isabella Romeo’s eyes show how happy she is to be in the classroom with her 14 students. She volunteered to be the in-person fourth-grade teacher.

“Being back in person kind of feels like a relief to finally see them and meet students that I’ve never met before, only on the online,” she says. “We’re all happy to be back, and we’re doing everything we can to be safe and make sure everyone feels comfortable.”

Fifth grade teacher Zoe Reeves asks her kids to talk to their peers about why they’re excited to be in school, and 11-year-old Ocean Myrick wastes no time in chatting up the kids closest to her.

“I met new friends, and it’s easy for me to learn outside of getting distracted,” she says about the first day in school.

Remote learning was frustrating for her because she has a bunch of brothers and sisters and often helped her mom with her younger siblings, she says.

At Holladay, 100% of the student body qualifies for free and reduced lunch — a measure of poverty. Public schools have long been charged with more than educating children, but that demand increased with COVID-19, exacerbating existing inequities such as difference in access to healthy food, technology or a quiet place to learn.

“Some didn’t have technology, some didn’t have the internet and so because of that we said, we’re going to do whatever it takes to create that equity,” Strozier says. “You need a hot spot, we’re driving it to you. We just made sure that if somebody couldn’t get it, our job is to remove the barriers that prevent us from having equity online. And if somebody didn’t have food, then we’re getting some food. Whatever it takes for you to be successful.”

States can postpone standardized tests — or administer them remotely — during the pandemic, but Arizona is choosing to give them in-person anyway. Many parents say they'll keep kids at home instead.

How one Vail middle school teacher manages with the new normal of braving a pandemic everyday to simultaneously teach in-person and remote students.

The COVID-19 B.1.1.7 variant, first detected in the UK, spreads more easily and may be more deadly, according to the Centers for Disease Control and Prevention.

Tucson morns longtime TUSD educator and activist Michael Gordy, who died on March 18 after more than a month-long battle with COVID-19.

The Tucson eighth-grader won the 2021 Arizona Spelling Bee, becoming the first winner from Pima County in the 20-year history of the bee.

TUSD has offered culturally-relevant classes for years, but some would like to see that effort become more widespread and explicitly anti-racist.

As Tucson schools work to get students back on track, funding falls short

As officials plan for summer school catch up courses after a year of remote learning, some are finding that stimulus funds won't cover the bill.

Education Notes: Program to give Tucson girls a look into the world of STEM

As St. Mark's Preschool prepares to shut its doors after five decades of service, parents and teachers are coming together to launch a new school. 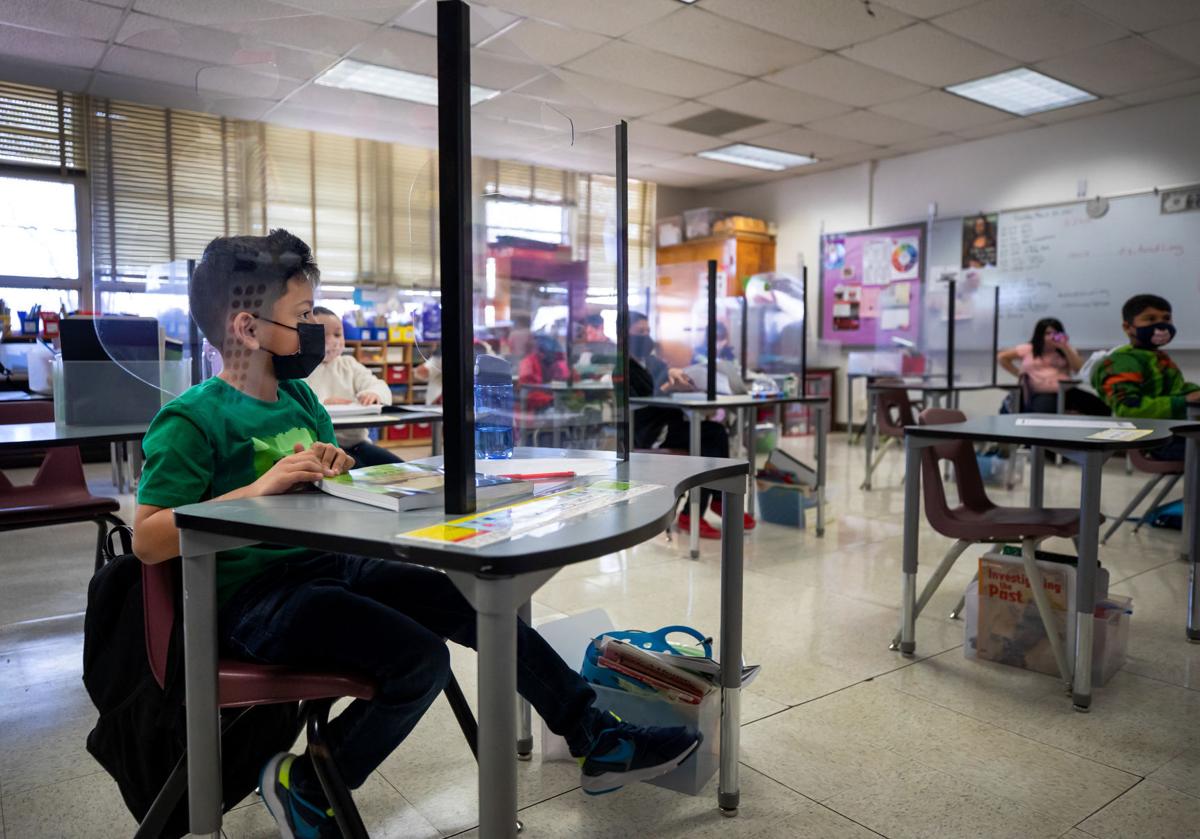 , March 22. At Holladay Magnet Elementary School, plexiglass dividers were added to desks while students were socially distanced. “We have ninety kids back in the building, so we have about 45% of our kids are here,” said Principal Tonya Strozier.

Grace Beltran, co-teacher and curriculums service provider, teaches students about spacing by having them hold out their arms before the start of classes at Holladay Magnet Elementary School. Tucson’s largest school district has invested heavily in technology and COVID-19 safety precautions. 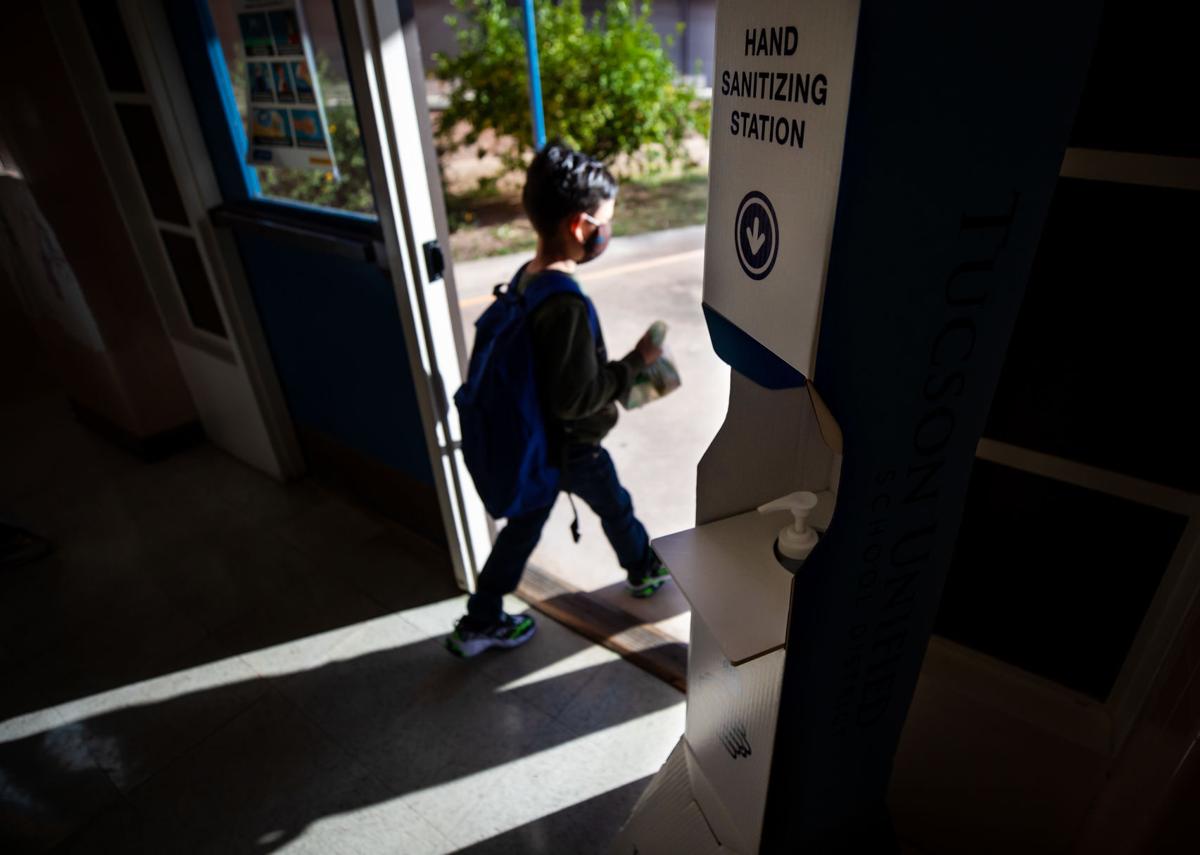 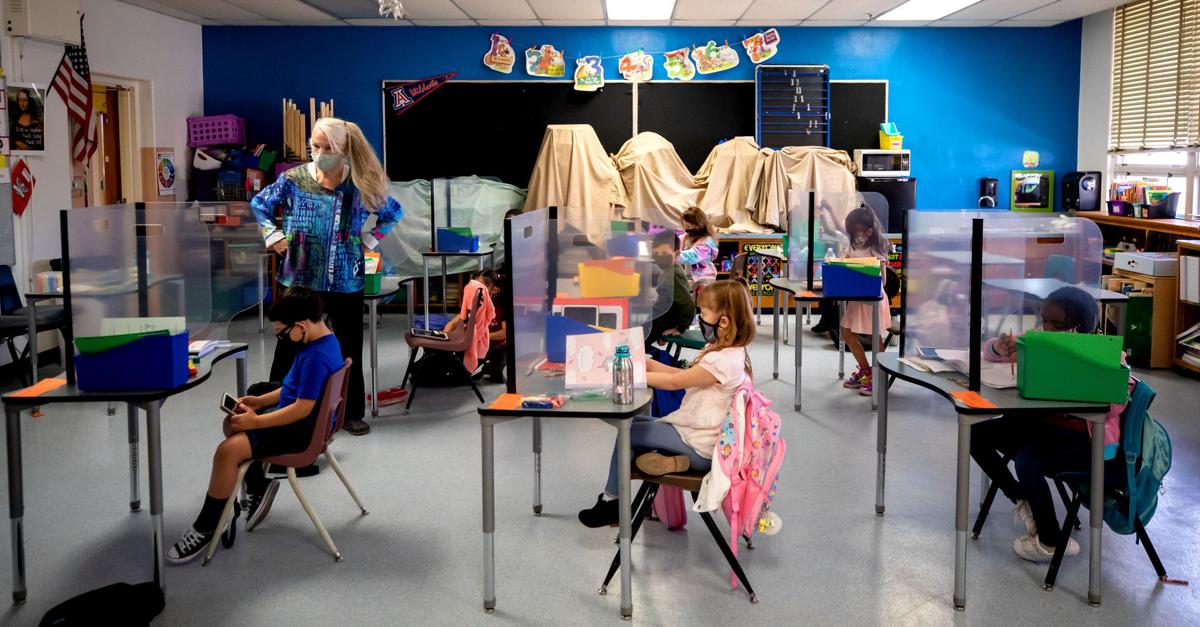