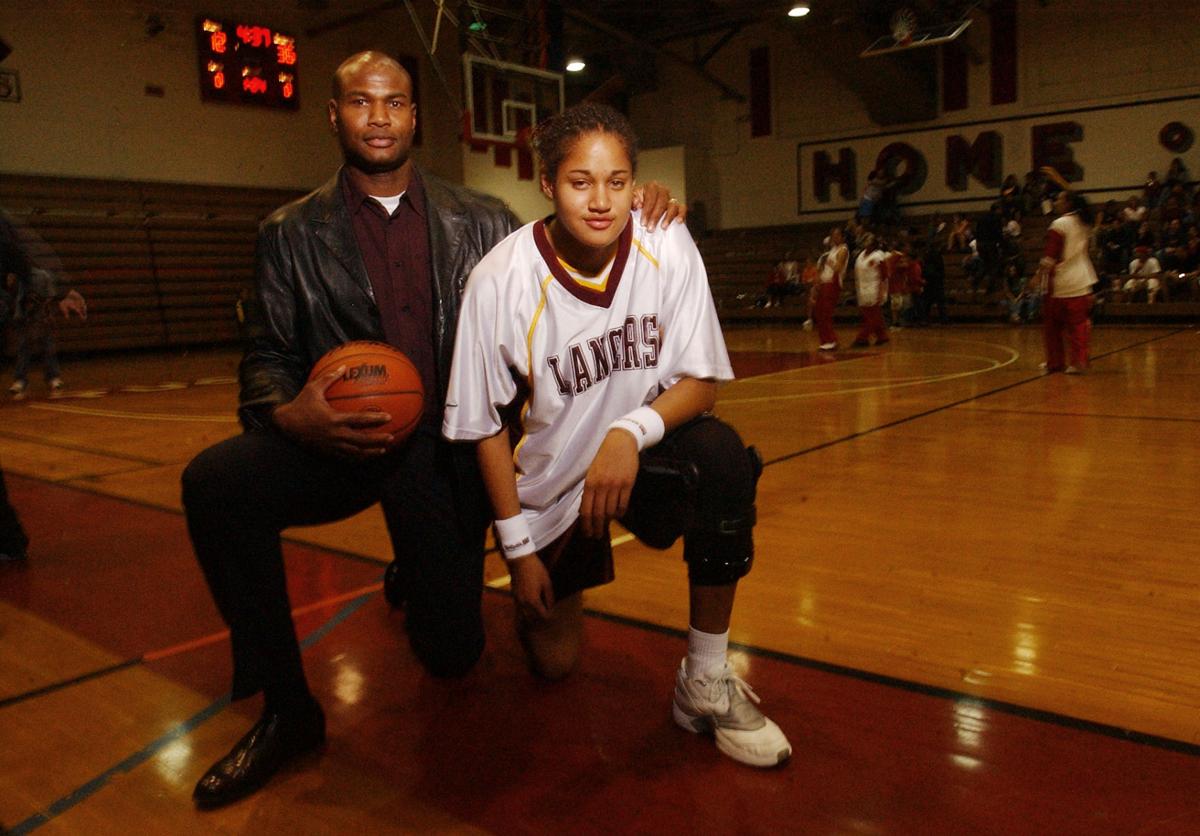 Former UA basketball player Robbie Dosty, left, takes a knee with his daughter Sybil Dosty for a photo in the gym at Tucson High in 2003.

Robbie Dosty, a former Coolidge High School and UA basketball standout and father of two of the most decorated female athletes in recent Tucson high school history, has died. He was 62.

Dosty played at the UA from 1977-81, averaging 10 points and five rebounds per game. The Golden State Warriors took the 6-foot-5-inch Dosty with their sixth-round (148th overall) pick in the 1981 draft. He later returned to Southern Arizona, working in the insurance industry and private business.

Dosty grew up in Randolph, a historically Black neighborhood in Pinal County, and attended Coolidge High School. While there, he helped lead the Bears to a 26-0 record and their first state title in 1976. Dosty did it all while taking care of an elderly distant relative in a ramshackle house; he moved in with the man at age 8, when his mother died. Dosty did all the cooking, and the two lived off the elderly man’s social security check.

Dosty spent a year at a junior college before signing with the UA and coach Fred Snowden. His career with the Wildcats was nearly derailed when Dosty was seriously injured in a July 1978 car wreck. Dosty’s car swerved to avoid a dog, veered off Interstate 10 south of Tempe and flipped, leaving him with a collapsed lung and a knee injury that required multiple surgeries. He missed his sophomore season and started just one game as a junior before averaging a career-high 13.4 points and 6.6 rebounds as a senior.

A Feb. 5, 1981 Star story explained that Dosty began to shine when two of the team’s top forwards, Greg Cook and Dave Mosebar, departed the team after one punched the other.

“At 6-5, 190 pounds, (Dosty) is probably the best rebounder on an otherwise poor rebounding team,” the Star wrote. “It’s not unusual to see Dosty plow his way inside, maybe throw an elbow in the process, leap high and with one hand, snare the rebound out of the sky.

“He lands with a snarl on his face. Opponents get the message.”

Dosty’s two daughters found success at Salpointe Catholic High School. Sybil Dosty averaged 27 points and 11 rebounds per game over four seasons, and in 2004 was named the Gatorade Arizona Women’s Basketball Player of the Year. She went on to play for legendary coach Pat Summitt at the University of Tennessee before finishing her career at ASU. Dosty’s younger daughter, Whitney, was a standout volleyball player at Salpointe and the UA who played overseas and for Team USA.

Dosty was beset by legal issues in recent years, and had moved back to Coolidge. He is survived by his children.

Former UA and USA Basketball U19 coach Sean Miller is on the committee that selects the final 12 players.

As part of reworked contract, Adia Barnes to make $1 million in 2021-22 — and more in future years

The Arizona Board of Regents will vote to approve Barnes' new deal at their June 10 meeting. Tommy Lloyd's contract is also on the board's agenda.

Her twice-reworked deal, the yearly terms of which were made public this week, puts Barnes near the top of the Pac-12 in terms of salary and makes her among the highest-paid coaches in the country.

Fouts dominates UCLA a night after she shut down Arizona in the opener.

Former UA basketball player Robbie Dosty, left, takes a knee with his daughter Sybil Dosty for a photo in the gym at Tucson High in 2003.