If recent history repeats itself, then the Arizona Wildcats are in decent shape to snap their 17-game losing streak Saturday against the Colorado Buffaloes in Boulder.

Consider how the Wildcats play against Colorado in the month of October. The last time the Wildcats fell to CU in October was a 35-16 loss on Oct. 8, 1960. Fifty-seven years later, Arizona quarterback Khalil Tate announced himself to the college football world with 327 rushing yards against the Buffaloes in Boulder, setting an FBS single-game rushing record by a quarterback in a 45-42 win.

The Wildcats haven’t won a game since.

Tate talked to the Star on Thursday about his success against Colorado, the NCAA’s new name, image and likeness rules, his UA career and “staying ready” for professional opportunities:

What do you remember about the Colorado game in 2017?

A: “There wasn’t really an expectation, I don’t think anyone really had an expectation — myself, our fans, their fans. There wasn’t an expectation that it would be that type of game. It was deemed as a quote, unquote regular game at the time. It was nothing crazy at the time, but we both had pretty solid records. We weren’t at the top of the league, but we were two programs that were always trying to get into becoming a tier-one Pac-12 team. It was unanticipated, but it ended up becoming something that was unforgettable.”

What was that week of preparation like for you?

A: “There was a lot leading up to it. We had a bye week the week before that game. My career wasn’t super promising at the U of A and it was still early on. Personally, I felt like I had the talent, but I wasn’t playing, so it wasn’t super promising as far as playing and leaving the mark that I left. We had a bye week and I just went back home (to Inglewood, California). The high school that I went to (Junipero Serra), they were playing Chaminade (Prep). I went to the game and at the end of the game, I was just talking with my old coach, and I just told him what was going on as far as having the talent but I haven’t been able to show that at that point in time yet. And I just remember telling him, ‘When they do put me in, they’re not going to take me out.’ That’s what I told him, and then the next week, yeah, ended up being Colorado week.”

In that Colorado game, what allowed you to get out into the open so much and show off your burst?

A: “That’s something I’ve always been able to do. I wasn’t surprised. The things I was able to do, I wasn’t surprising myself. I know it surprised other people because they hadn’t seen it, but anybody who followed me and knew what I was about, they knew what would happen if I got the opportunity. … People who were surprised don’t have a sharp eye for things that are exceptional.”

Did you know in the fourth quarter that you posted an FBS record?

A: “I didn’t know I had a record until the end of the game, honestly. I just remember that I didn’t have a lot of carries, and usually when somebody breaks a rushing record, they have a bunch of carries. For me to not have a bunch of carries, I never really put it together that if I had these long runs, it could add up what it added up to. I think I had 14 carries and I’m not the greatest at math but that average is pretty up there. I wasn’t too sure, I was just taking what they gave me and put a little twist to it. When they told me I had 327 yards, I was like, ‘Wow,’ because the game was back and forth, it wasn’t a blowout. … It wasn’t something where I could just sit back and look at the scoreboard, it was a dogfight the whole way out.”

Where does that game rank among your favorite games at the U of A?

A: “Individually, it’s No. 1, because I was able to do what I did with the amount of carries I had and we got the win, which is what matters.”

How did that game against Colorado propel you for the rest of that month and ultimately your career at the UA?

A: “It was a big month. The Colorado game was the first week of October and it’s my birthday month (Oct. 23). There’s a lot of things in this month that mean a lot to me. It was a crazy month. I couldn’t script it and it wasn’t something that was planned, per se. It wasn’t something that I was trying to do, it just kind of fell into my lap.”

Athletes can now benefit off their name, image and likeness. How do you think you would have fared in this new era of collegiate athletics?

A: “I could’ve benefitted a lot from it. When it first came earlier this year, a lot of people hit me up and said, ‘This would’ve been crazy for you.’ People would say I was an overnight sensation, even though I put in the work. But when you’re an overnight sensation, you’re going to do numbers. With it being 2021, everything is trendy and whenever something is doing good, a lot of people are going to jump on it to push it forward. … Being a college player, you’d like to be able to capitalize on (NIL) and everything that comes with it. Now, it’s great that they’ll be able to.”

How eye-opening is it that the last time Arizona won a football game was against Colorado in 2019, when you were the quarterback?

A: “We ended that season on a losing streak and I definitely didn’t want that to be the last game we won, but it’s crazy that it just so happened to be Colorado. We’ve had a lot of success with them over the years, and it’s crazy that it’s them out of all teams.”

Do you feel like you achieved everything you wanted at the UA, or was there a lot left on the table?

A: “I had a pretty good career. Injuries didn’t help and other things also didn’t help, like coaching changes and having to adjust to new things. Injuries and coaching changes aren’t going to be the best thing for a player. My career was up and down, but I brought a lot of electricity to the city of Tucson and I think I made it fun. That’s what life is, it’s about having fun. I just wish I was healthier and did a lot more, but I’m content. I did the best I could with the circumstances I was put in. I just put a smile on my face and kept working. I don’t try to shame anybody because that’s the easiest thing to do, but I’m not that type.”

If you could change one thing about your time at Arizona, what would it be?

A: “Just wins. The wins are what people remember the most. That’s all. Just wins.”

Which one hurt you the most: Not winning in Los Angeles, not beating Arizona State or not winning a bowl game?

A: “All three. Not winning at home didn’t hurt, because every time I was able to play in L.A., I gave it my all. Losing to ASU was very upsetting, because two of those times I was injured and we were in the lead. There were just some silly things that happened in the game that gave them the better end of the stick. The bowl game, I only went to one and of course you want to go to more. When you go to a bowl game, it’s great for the seniors. So, I would say all three hurt, but none stick out more than the other.”

What are your thoughts on Arizona new coaching regime?

A: “(Coach Jedd Fisch is) doing well, but it’s tough coming into a situation with expectations, especially with a Pac-12 team that’s been good. We’ve had our years and we’ve never been in tier one of the conference, so it’s always going to be tough and it’s going to take time and a few recruiting classes. They’ve been fighting in games and it’s not like the results are lopsided. Right now, it’s just not enough. They’re just missing those little things to help break the game open for them. I think (Fisch) is doing pretty good. A win would help, but he’s doing pretty good considering the situation he was thrusted in.”

You were waived by the Philadelphia Eagles at the start of the season. What’s your current plan as a professional football player?

A: “Just work, work work. I’m staying at it and staying in shape. I’m just making sure I’m doing everything I can, so when I get the call, I’m ready. You don’t want to get the call, not be ready and then feel bad for yourself. I’m doing things on my end to control my own destiny. I want to do things I can do to help myself, so I’m ready at all times.”

Are you a wide receiver? Quarterback?

A: “I’m doing both. I’m a natural quarterback, so there’s not much to work on in certain types of drills. Receiver is something that’s new for me, so I’ve been focusing on that more. It takes time to adjust to certain body movements to where it feels second nature. Every day, I do certain things to stay ready for when I get that call.”

Jedd Fisch says Gunner Cruz is back to embracing QB1 role. UA's walk-on tryouts make headlines, but no new players were added to the roster.

Picks against the spread, over/under for Arizona-Colorado and other Pac-12 matchups

The Star's Michael Lev, Justin Spears and Alec White give their gambling picks for the Arizona-Colorado game and other matchups around the Pac-12. 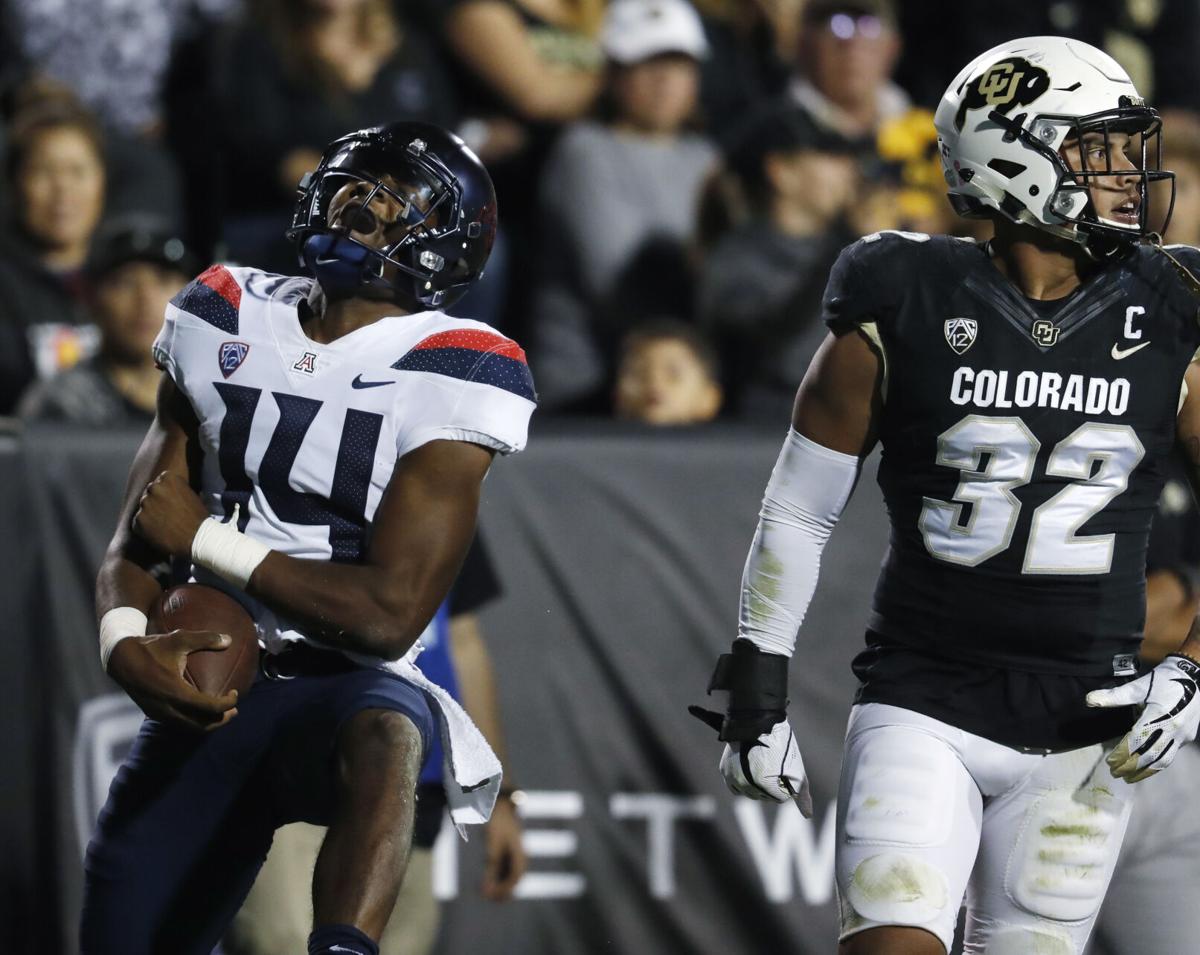 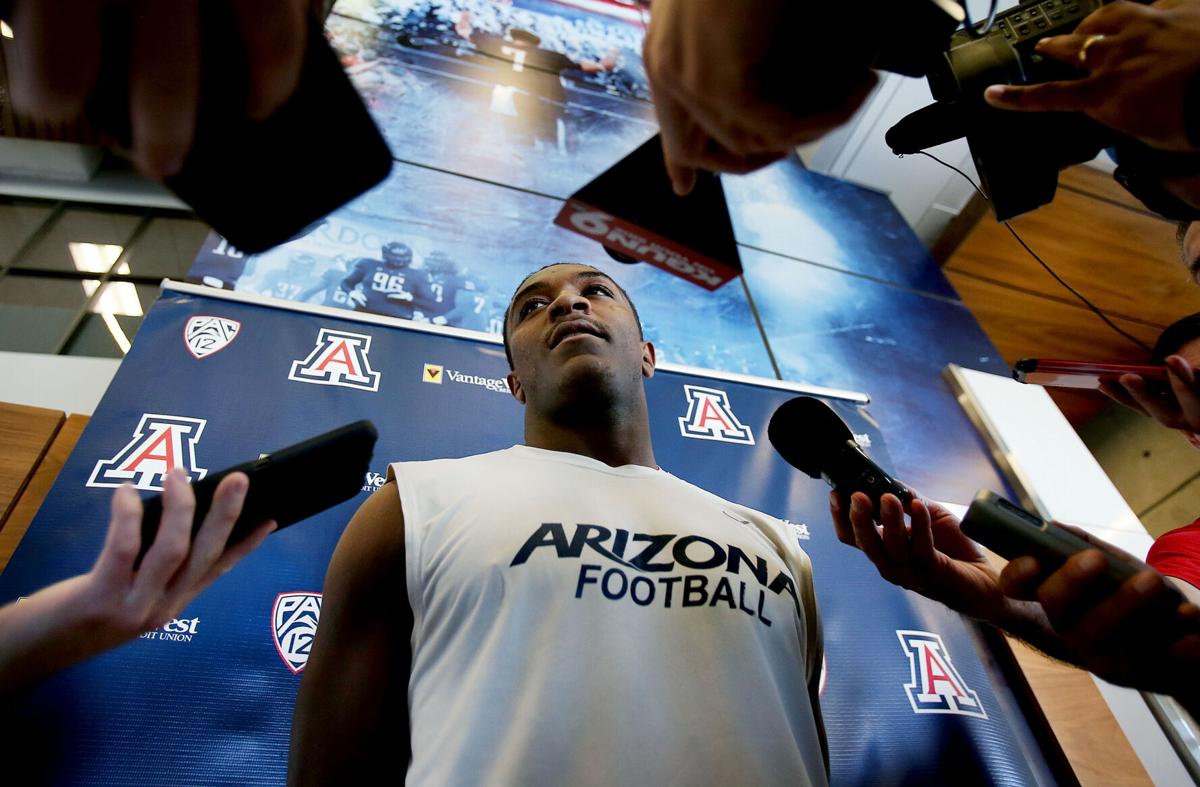 Khalil Tate became an overnight sensation following his record-setting performance against Colorado in 2017. The NCAA’s name, image and likeness rules, had they applied then, could have made the Wildcats’ quarterback wealthy.