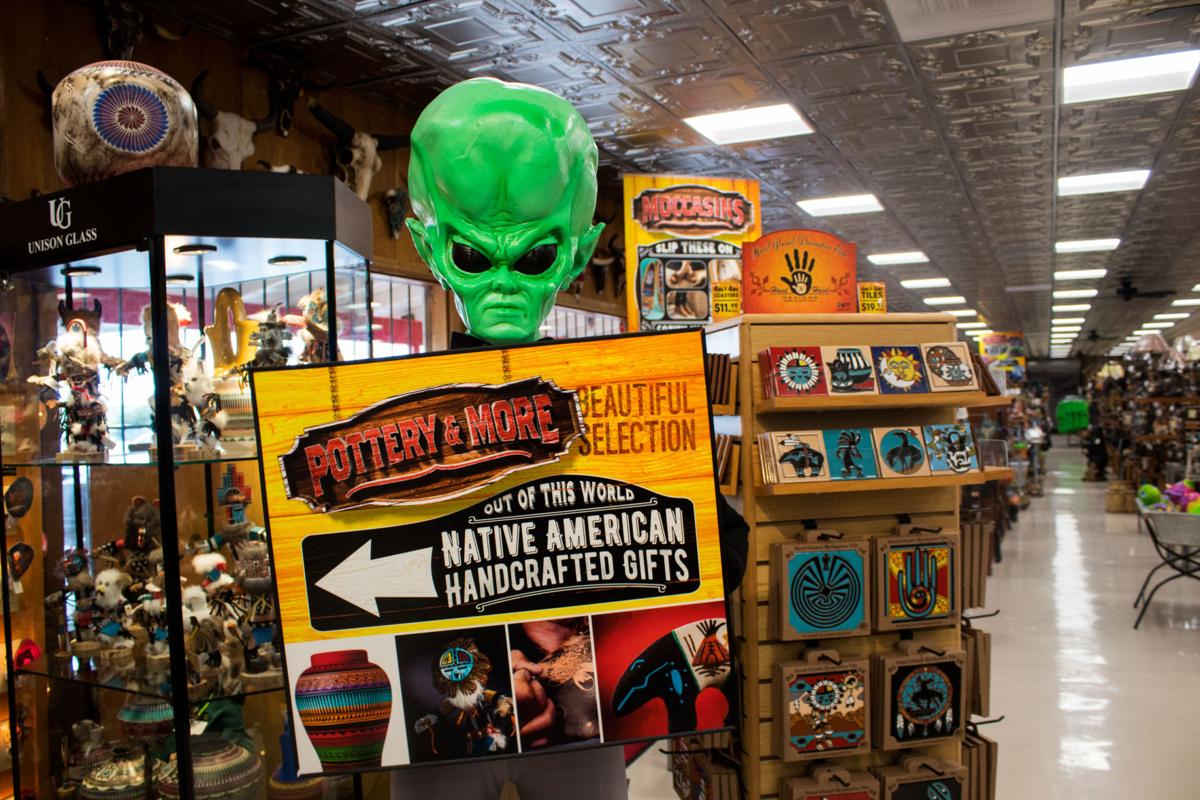 The Thing gift shop is a great place to buy some Southwestern kitsch before you head into the museum. 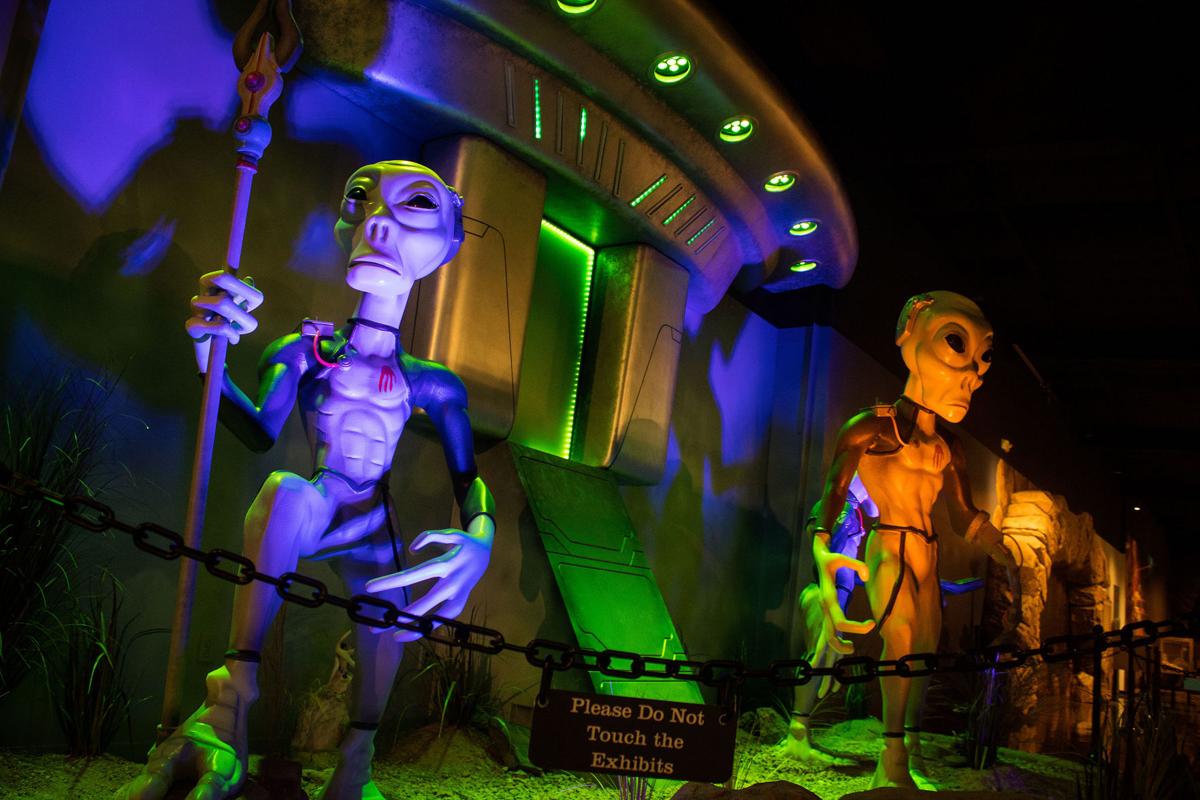 Alien overlords stepping out of their space ship. 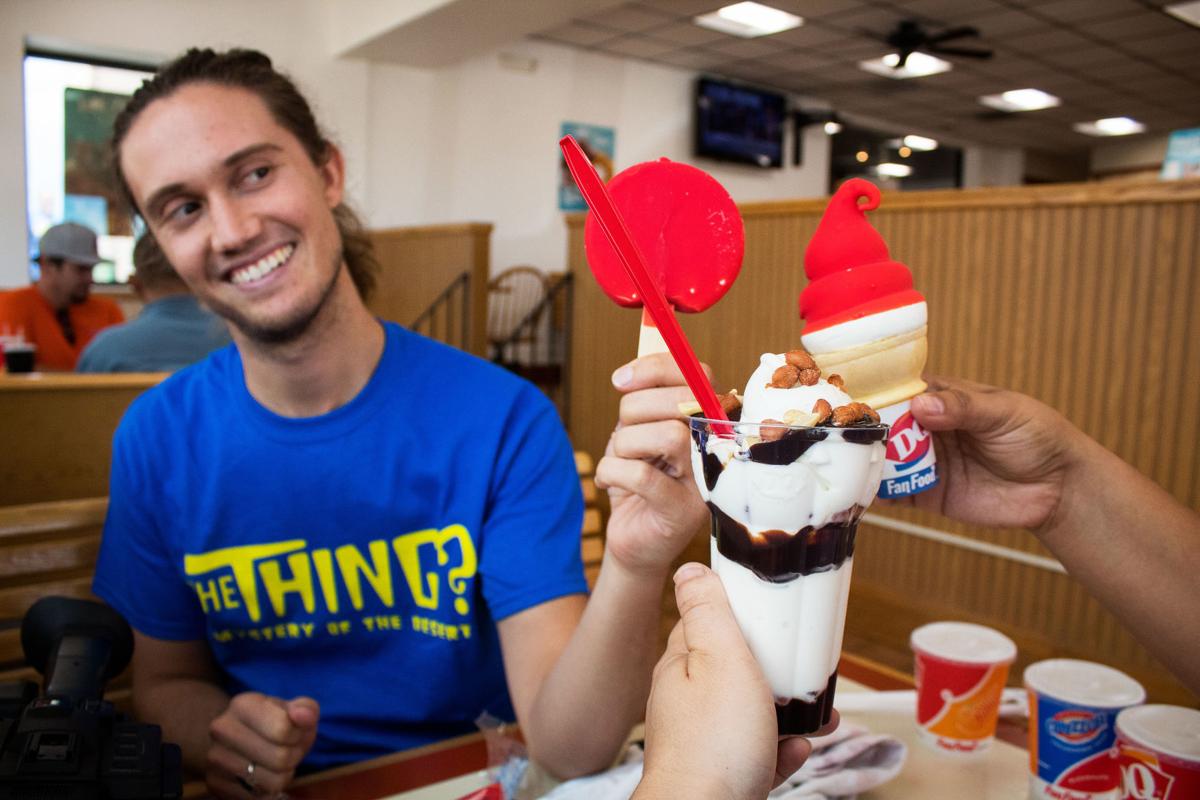 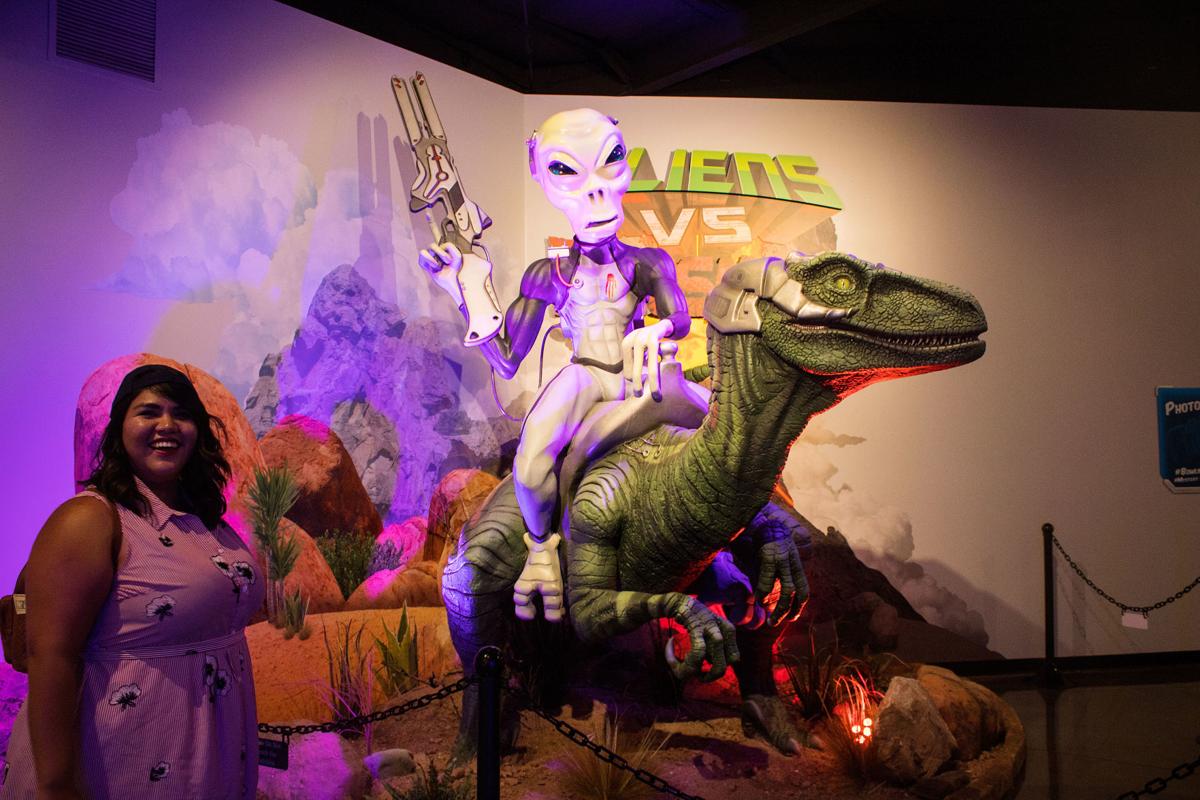 Samantha posing by an alien riding a Velociraptor like a horse. 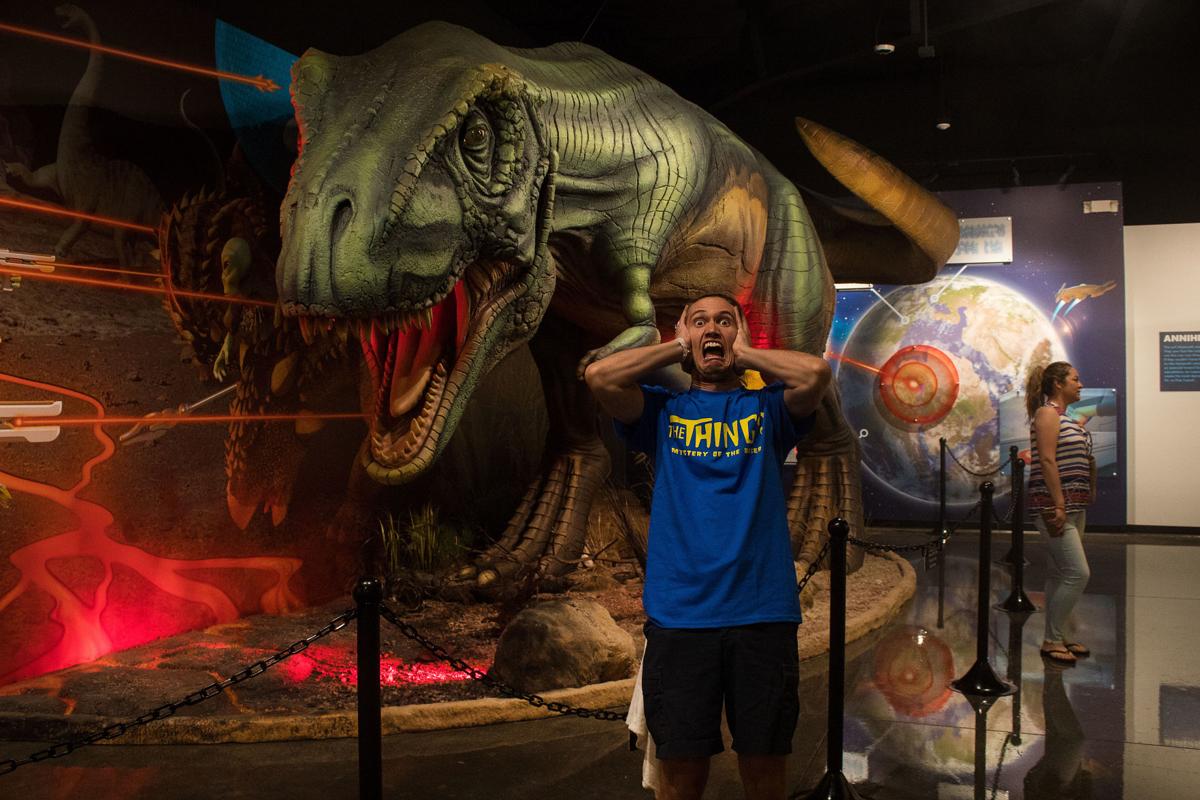 Nick was totally freaked out by this T-Rex. 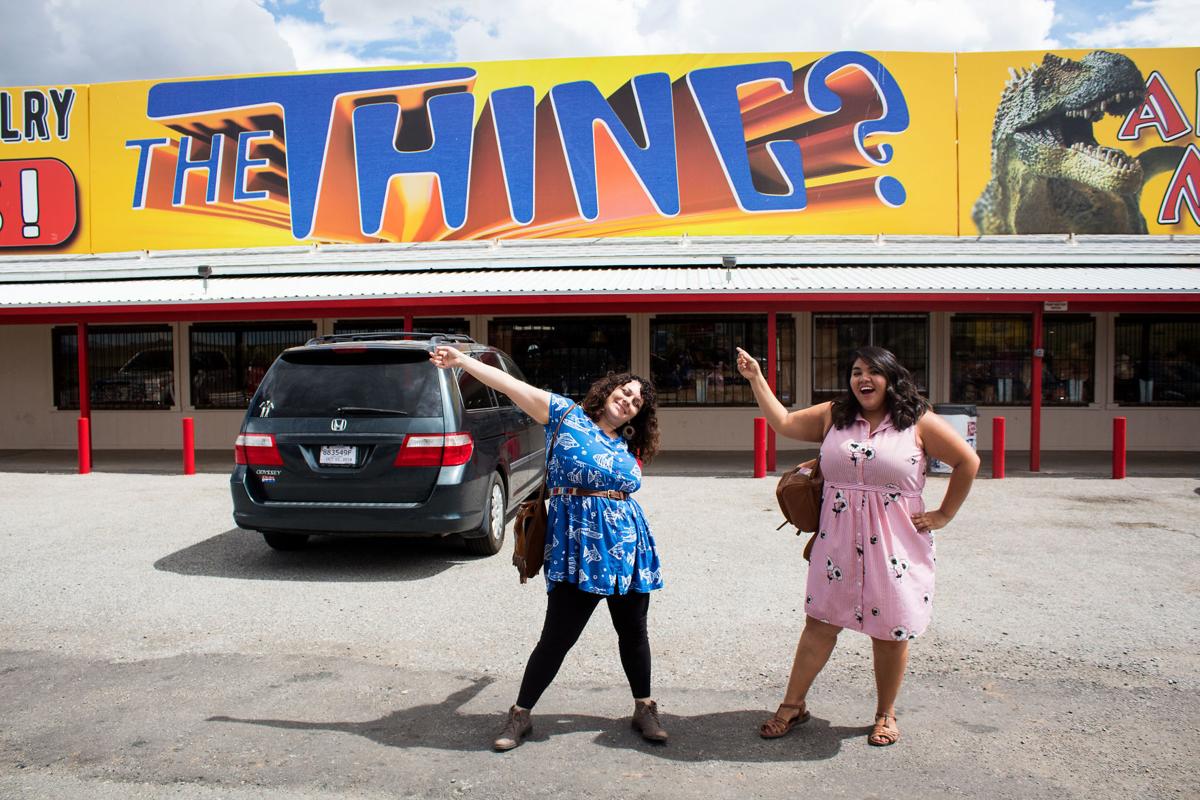 Samantha Munsey and Andi Berlin posing in front of the iconic I-10 rest stop. 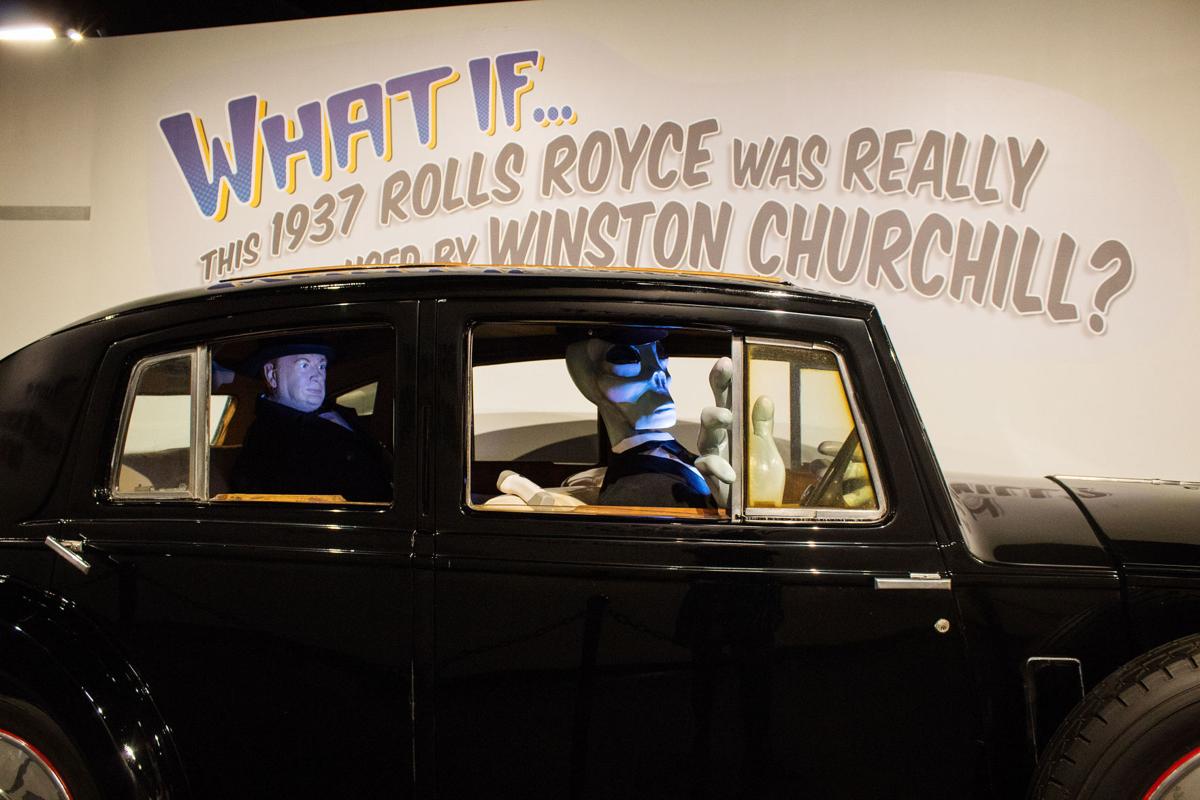 Winston Churchill being driven by an alien Rolls-Royce chaperone.

If you grew up in Arizona, you've surely seen the signs. You may even have a distant memory of walking into a gas station and paying a dollar to see some freaky wooden sculptures and a replica of "Hitler's car."

The picturesque stretch of I-10 east from Tucson is plastered with bright yellow billboards for The Thing, "Mystery of the Desert." If the enigma hasn't consumed you by the time you reach Willcox, then you surely have special powers. Because everyone wants to know: What is it???

A few months back, I stopped by the Texas Canyon rest stop one afternoon and found the mystery of my childhood just sitting out there in the open, in the back of the gift shop by the bin where you can mine for gemstones. (The horror!)

Turns out, the cheeky museum was in the middle of a $3.5 million dollar remodel, and would be closed until Labor Day weekend. The new theme? Aliens vs. dinosaurs.

The current owners of The Thing, Bowlin's Travel Centers, decided to upgrade the property last year during a corporate meeting, writes my colleague Gerald M. Gay in the Star.

The Albuquerque-based chain Bowlin's owns 10 different gas stations across the Southwest including the Shell station at Picacho Peak. In the article, Bowlin's employees compare the original museum to a "circus side-show" and say the new concept will be more like the Roswell UFO Museum in New Mexico.

When my two coworkers Samantha, Nick and I returned shortly after Labor Day to see the new concept, we could see the change right off the bat. The ceiling of the gift shop was lined with those fancy silver tiles you see when a business wants to class it up. And in the center of the shop, a roasted nut stand! Just like the Renaissance Festival ...

Looking at those roasted nuts in the little paper cones, I had a scary thought that the store's Dairy Queen might be gone! I turned my head to the right and there it was, just as before. I'm glad something is still sacred.

Back over by the nut stand, an older man in a camo hat with the words "God, Guns and Guts" filled me in. He said the new museum concept was developed by Bowlin's employee Myles Erwin, who seemed to have quite the imagination. Using events throughout world history, Erwin weaved together a tale about warring alien factions and their attempt to enslave the dinosaurs, resulting in their extinction. "You'll never think of history the same again," he said.

None of this subject matter seemed to have much to do with the actual Thing, or Hitler's car for that matter. When I asked about it, the woman roasting the nuts turned around and told me Hitler had been replaced with Winston Churchill, because, "you know ..." she said, and then got quiet and turned her head away.

The $1 ticket price had been upped to $5, or $20 for a family of four (🤷), but it was well worth it. I mean, the museum used to be just a bunch of old sheds in what looked like someone's backyard. Now the entire back area was enclosed, with giant dinosaur sculptures. When you walk in, you're greeted by an alien riding a Velociraptor.

The first couple rooms are dominated by these giant sculptures. There's a group of aliens coming out of a UFO holding spears. And there's the T-Rex with eyes that follow you as you move. All these sculptures are pretty impressive, but I was drawn to the storyline, about aliens who conquered Earth because their home planet RAH'thian Prime was dying. Two alien clans formed, the ruthless warlords the Mylzerath and the gentle thinkers the Ammattria.

Following orders by the Mylzerath, the Ammattria developed mind-control technology that worked with dinosaur DNA. Under alien control, the dinosaurs peacefully built the new civilization until war broke out and destroyed the planet. The Mylzerath fled, but the Ammattria decided to stay and influence world history from behind the scenes.

Apparently aliens were there for all of our major historical events, and you can read about in detail as you walk through the corridors that lead to the next part of the museum: the old stuff. Here, you'll see some of the previous eccentricities that made up The Thing before the remodel, like some vintage farm equipment and a sculpture of longhorn bull pulling a prairie wagon.

That all leads up to The Thing itself, which I won't ruin for you. But I will say this: It's all fancy now and lit up with neon lights. On your way out, you can talk to Wayne, who lives on the property in an RV somewhere out back. It's hard to tell whether he really believes the story or not, but he sure is good at making it compelling. By the end, I feel like I kinda wanted to believe it a little too.

I-10 attraction "The Thing" is getting fancier, bigger and weirder (if that's possible)

On Saturday, a new museum revolving around the The Thing’s origin story will debut in a 12,000-square-foot facility.

It's peach season in Willcox! Why this country town is your next monsoon getaway

Go wine tasting, visit the Chiricahuas and more on this fun day trip.

These 13 eateries around Tucson failed health inspections in August