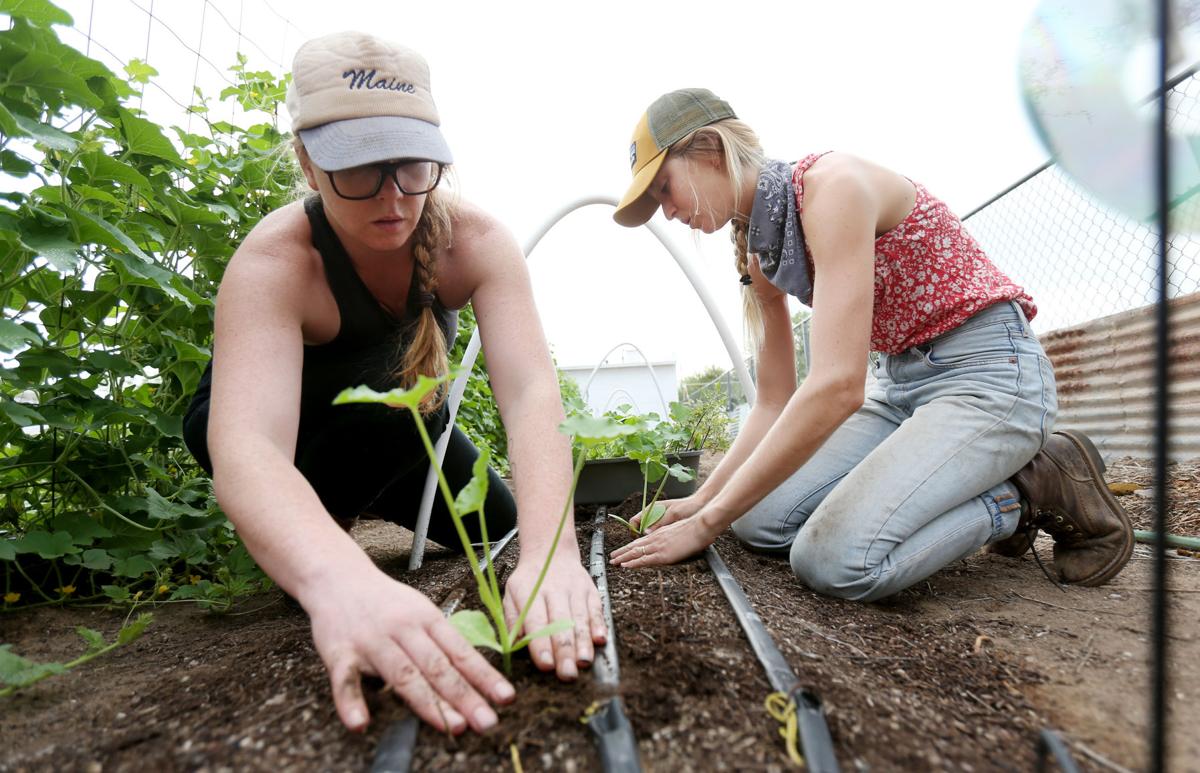 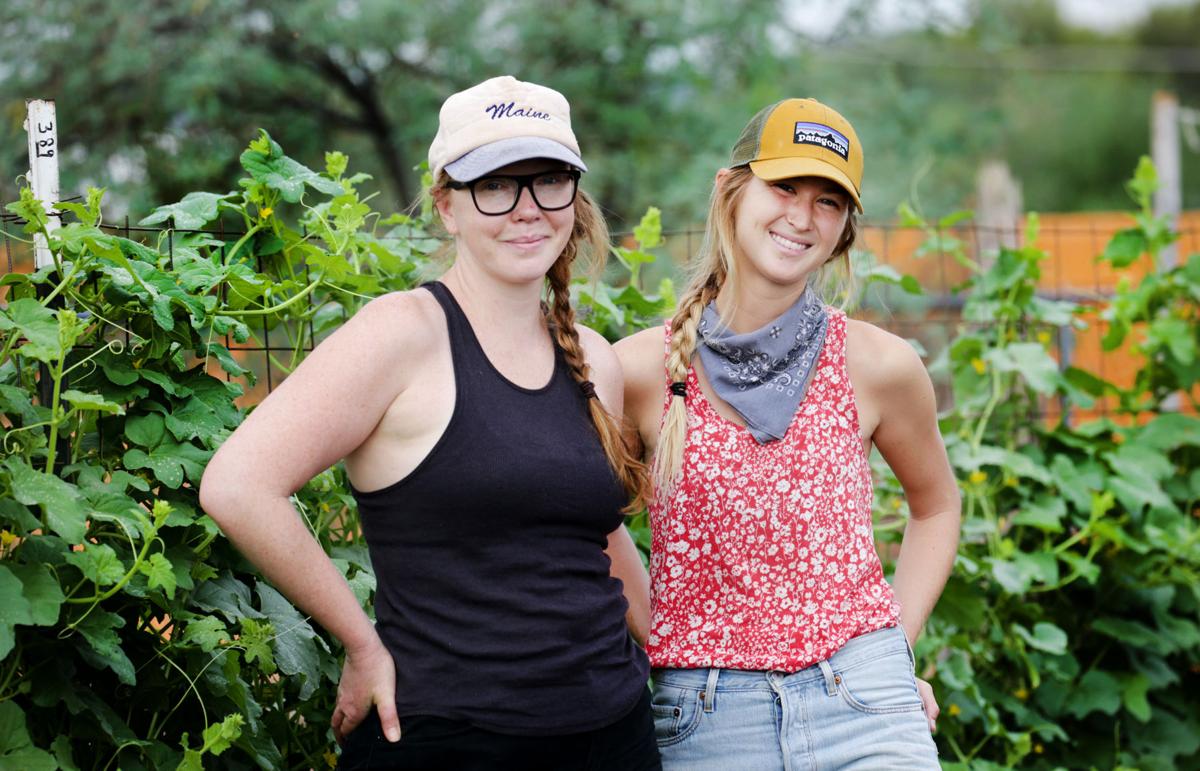 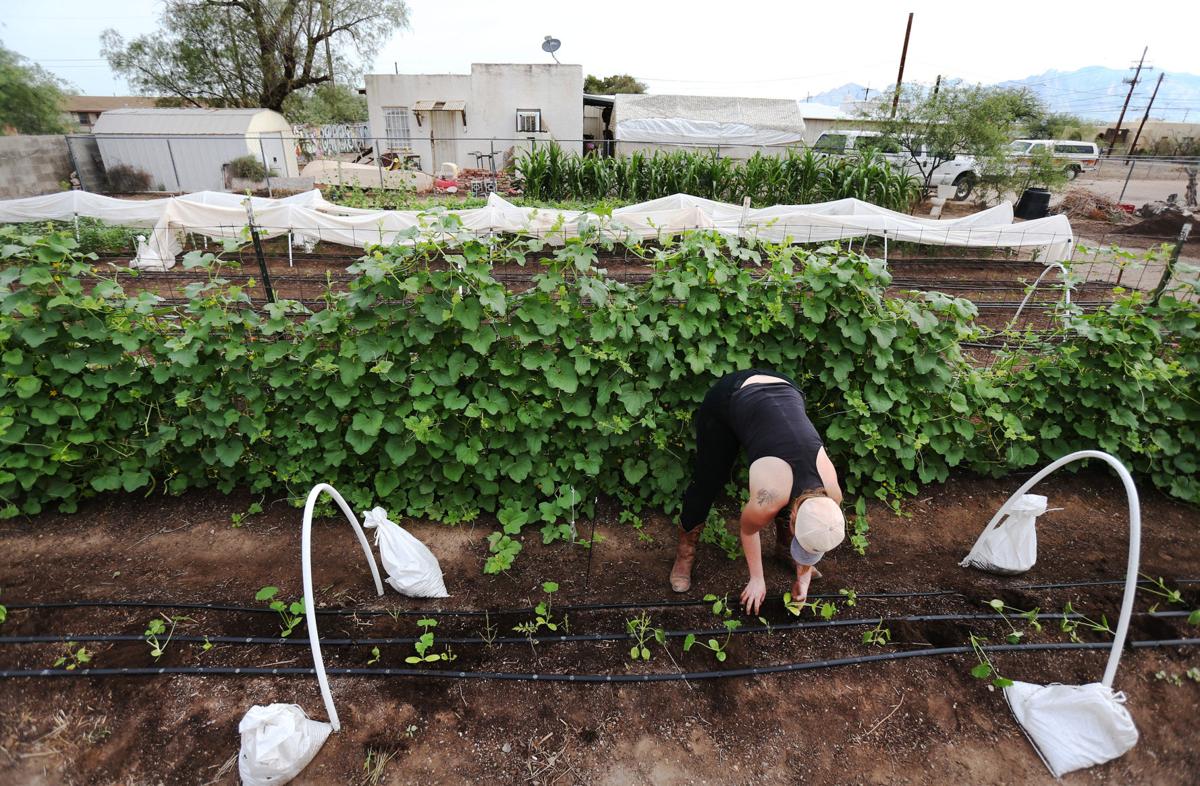 Jasper Ludwig, owner of 5 Points Restaurant and Market, plants golden zucchini in her 3,500-square-foot urban backyard farm. The crops grown here will supplement, not replace, the produce the restaurant needs. 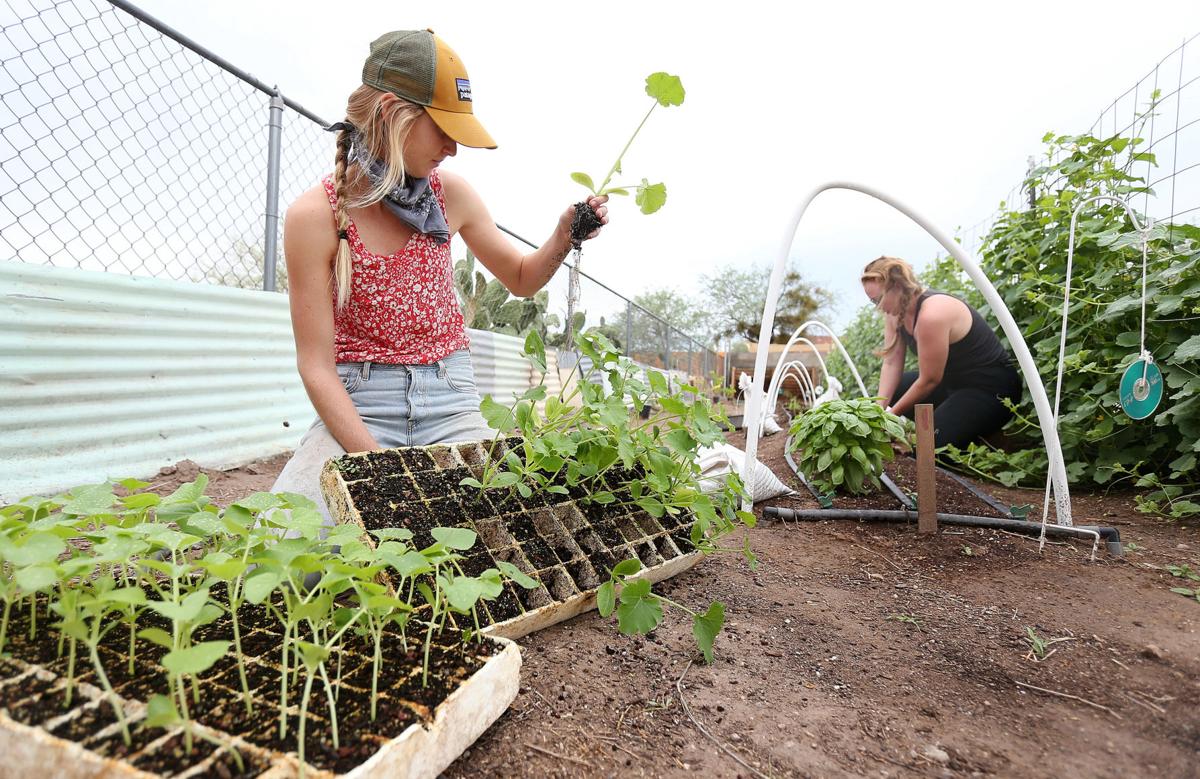 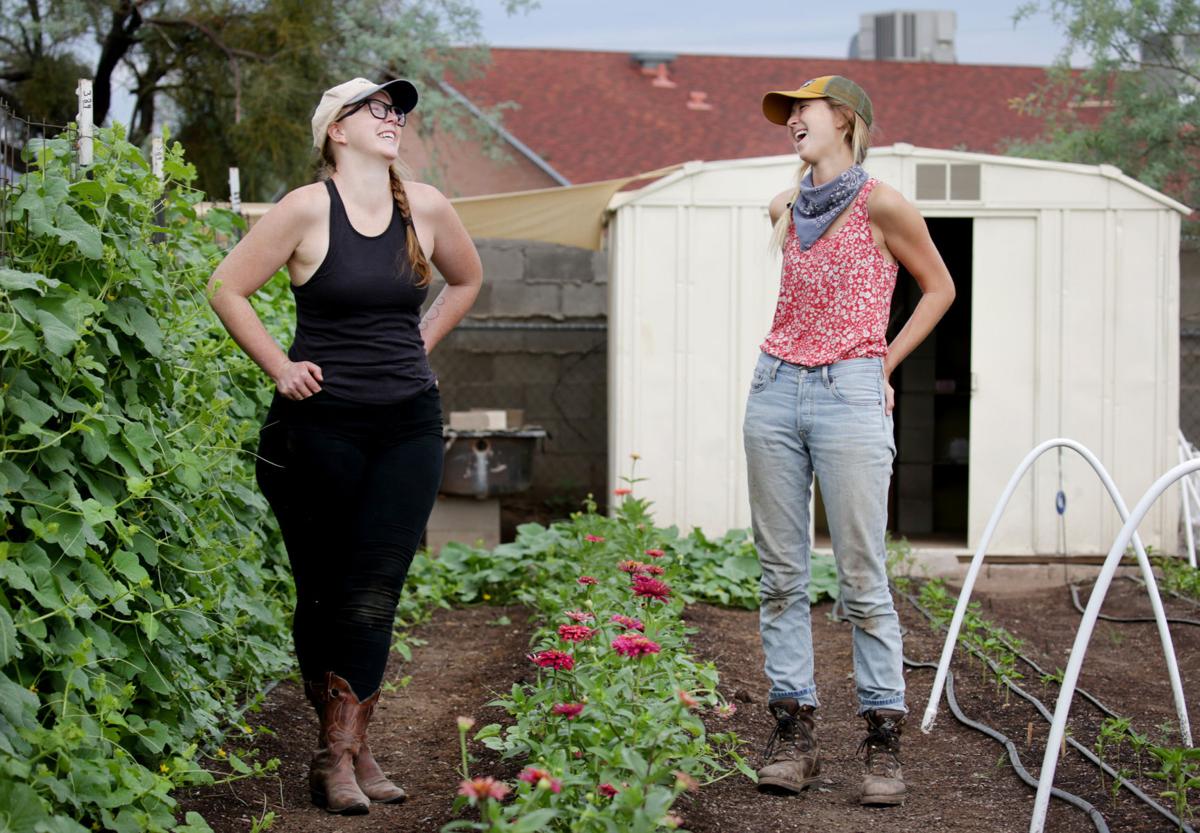 Jasper Ludwig, left, and Sarah Brown, right, along with several other women, first put crops in the ground in July. 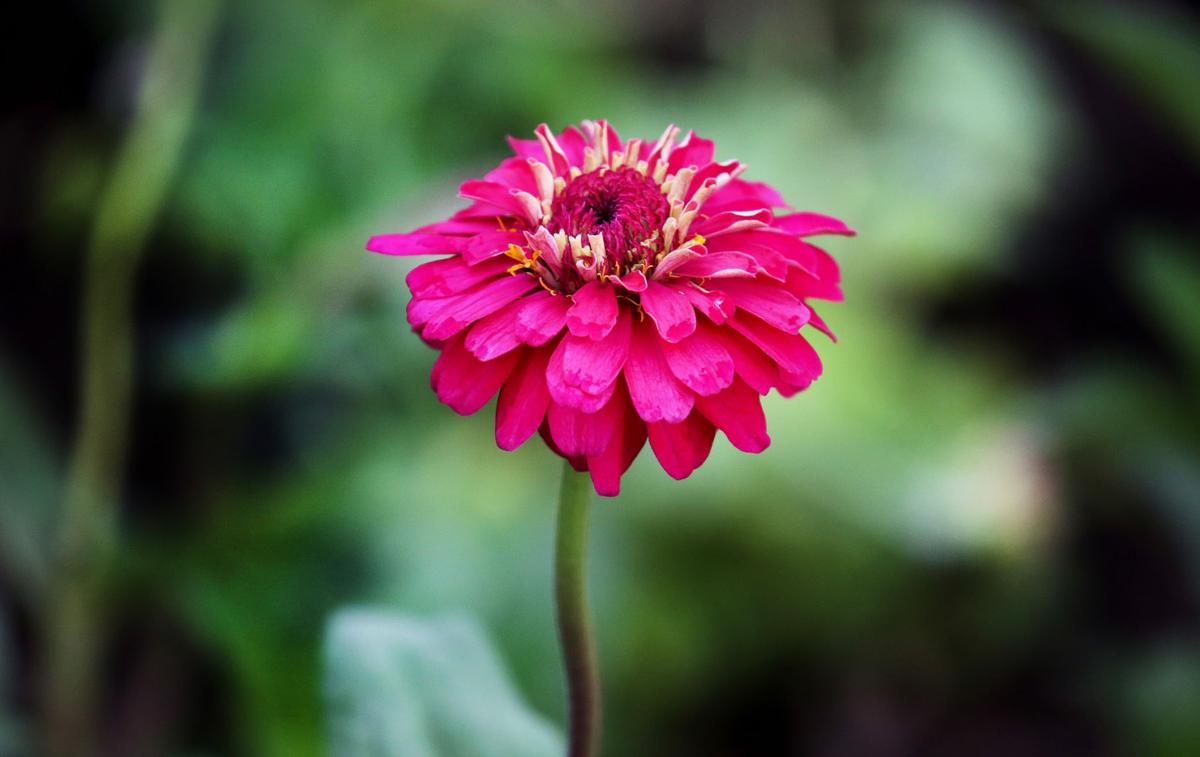 A zinnia plant grows in the urban backyard farm. 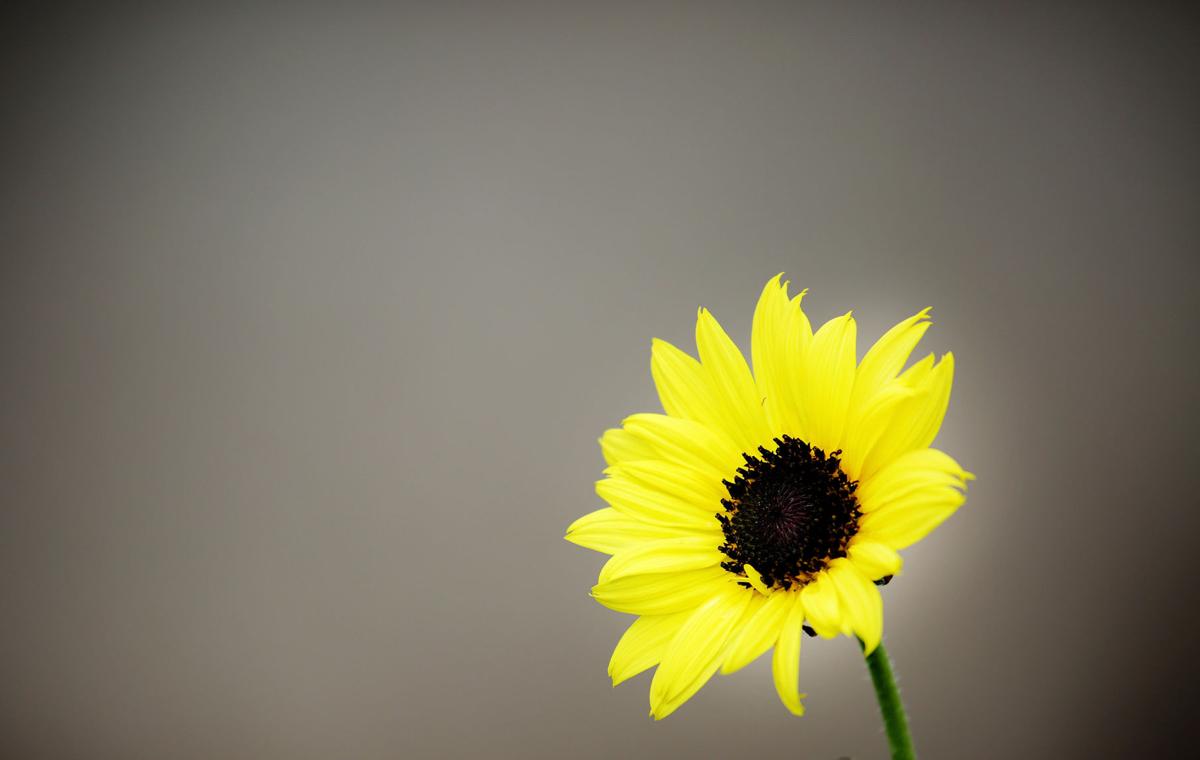 A sunflower grows in the urban backyard farm of Jasper Ludwig, owner of 5 Points Restaurant, and farm manager Sarah Brown, Aug. 10, 2018, in Tucson, Ariz. The pair are growing cucumbers, zucchini, tomatoes melons, peppers and corn to be used in restaurant dishes and for the Sunday morning farmer's market.

A sunflower grows in the urban backyard farm of Jasper Ludwig, owner of 5 Points Restaurant, and farm manager Sarah Brown, Aug. 10, 2018, in Tucson, Ariz. The pair are growing cucumbers, zucchini, tomatoes melons, peppers and corn to be used in restaurant dishes and for the Sunday morning farmer's market.

On an already-too-warm morning in August, Sarah Brown points out barren stems and gnawed leaves — what should have been a tidy row of leafy basil plants.

She had discovered scat nearby — perhaps a fox? Or birds swooping in for secret snacks? Now she thinks leafcutter ants are to blame.

"Somebody was munching our basil," Brown says.

She surveys the 3,500-square-foot farm nestled near the parched Santa Cruz River. Tucson's skyline shimmers hot in the distance.

Since its monsoon planting, the garden has exploded. Cucumbers now dangle from trellises and tumbling vines bear swelling melons.

All of this bounty ends up at 5 Points Market and Restaurant or its Sunday farmers market. Jasper Ludwig, a 5 Points co-owner, estimates they have harvested more than 200 pounds of cucumbers and maybe 500 pounds of melons from Riverview Farm, the new urban farm growing food and flowers for the restaurant.

That's a lot of pickles and agua frescas. Armenian cucumbers show up on just about every plate at the restaurant these days, Ludwig says.

"It was something we always wanted to do, ever since we opened our doors," she says of the farm. "One of our biggest goals as a restaurant was to source everything as locally as possible. It has a positive environmental impact, supports the local economy and gives you freshness and flavor."

Rattlebox Farm no longer sells at the market, but the farm tabled there in its early days and still sells produce to the restaurant regularly.

"It's not easy to start a farmers market ... but they persevered and it deepens the neighborhood relationship." says Paul Buseck, a co-owner of Rattlebox Farm. "The personal interaction is a bonus for everybody."

The market highlights sustainable food from Southern Arizona. That's also a focus for the restaurant.

Naturally then, a farm for 5 Points was a longtime dream.

"We already have a close relationship with our farmers where we can ask them to plant certain varietals for us, but we wanted to experiment with different heirloom varietals for the restaurant and grow flowers and just kind of bring it full circle," Ludwig says.

The restaurant sources many of its ingredients from local farms and will continue to do so.

"This is nothing in the scope of what we actually use at the restaurant," Ludwig says, gesturing to the striped green plot of land.

Having their own farm means fresh flowers on tables and a farmers market booth for varietals such as colorful glass gem corn. And of course, some of the organic produce appears in diners' dishes.

"My original intent was to have staff here working in shifts at the farm to create that connection and appreciation and respect for the food that we're processing and serving." Ludwig says. She plans to start organizing that when fall temperatures arrive.

Co-owner Haskins has already spent a lot of time at the farm. "To have the experience of growing it, harvesting it, prepping it and cooking it will, I think, yield an environment of greater respect for the process," he says.

Ludwig grew up on a 93-acre farm in Maine, cooking with locally sourced ingredients. Gardening has always been part of her life.

"I was always out there with my mom," she says. "We would grow food and process food and cook together."

After studying film photography in college in the Pacific Northwest, she moved to Tucson to start a nonprofit community dark room. But she found herself cooking a lot.

"And then 5 Points happened," she says.

Ludwig speculates that the gardens of her childhood are likely bigger than the restaurant's little farm, which is actually just a big lot behind a house her brother owns.

"The first time I went to see it, I could see rows," she says. "I could see evidence of farming there and I think it had just rained recently. As I walked across, my foot sunk in and I thought, 'Oh man, this is good soil.'"

She brought Brown on as farm manager and the women began dreaming up the farm's future in the early months of this year.

They'd crossed paths multiple times and had known each other since 5 Points' early days.

Brown had popped into the restaurant for coffee while on jury duty.

And then they learned they live several blocks from each other.

Brown's interest took off in an urban farming class through the University of Oregon. She grew up in Houston but has spent the past year working on as many local farms as possible, learning the nuances of farming in the Sonoran Desert, working with the seasons and outsmarting the pests that eat all your basil.

"The farming community here is just so open and willing to share information." she says. "I'm still so young and naive. I was joking with another farmer the other day that this little farm sometimes kicks my butt."

The women planted the first crops in the ground in July, counting on the monsoon to nurture the baby sprouts.

But when planting day rolled around, the rain had yet to arrive.

"I was nervous because it was so hot and humid, and the monsoon hadn't hit yet," Ludwig says. "It was just building and building, and when we went out to plant, this amazing cloud cover rolled in, and it started sprinkling on us. It was me, my mom, Sarah and one of her friends. Just four ladies planting in the rain."

Now zinnias and sunflowers have blossomed. Peppers, tomatillos, cucumbers and melons are ready for harvest. The tomatoes and glass gem corn are just about there.

Brown plans to have crops in the ground throughout the year — a perk to farming in the desert. They'll do a greens-heavy fall planting soon.

It's all about connecting people to the food on their plates.

5 tips for container gardening in the desert heat

(Sponsored post!) How to keep those patio plants alive this summer

To earn her Girl Scout Gold Award, this teen built a sustainable garden for preschoolers

They can also harvest rainwater.

Kick off the fall season with a good old fashioned day at the farm.

Bring some green into your life.