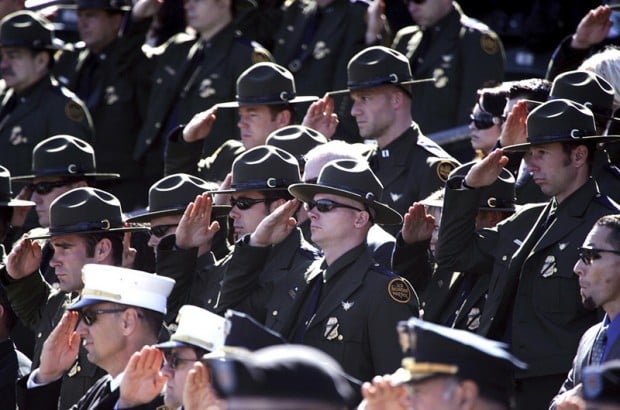 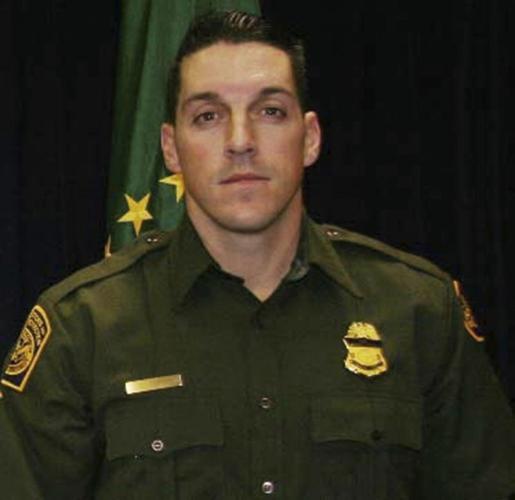 Border Patrol Agent Brian Terry, 40, was shot and killed in Arizona just north of the Mexican border after encountering what authorities said was a group of bandits known for robbing illegal immigrants as soon as they crossed the border. (Photo courtesy U.S. Customs and Border Protection/Detroit Free Press/MCT)
Brady McCombs Arizona Daily Star

Border Patrol agents shot beanbags at a group of suspected bandits before the men returned fire during a confrontation in a remote canyon, killing agent Brian Terry with a single gunshot, records show.

And an illegal immigrant wounded in the gunbattle who is now the only person in custody linked to the slaying contends he never fired a shot, according to FBI search warrant requests filed in the U.S. District Court in Tucson.

The documents provide the most detailed version yet of what happened in the deadly gunbattle Dec. 14 in Peck Canyon, northwest of Nogales.

The documents say the group of illegal border entrants refused commands to drop their weapons after agents confronted them at about 11:15 p.m. Two agents fired beanbags at the migrants, who responded with gunfire. Two agents returned fire, one with a long gun and one with a pistol, but Terry was mortally wounded in the gunfight.

Border Patrol officials declined to answer questions about protocol for use of force, citing the ongoing investigation.

But Terry's brother, Kent Terry, said the other agents who were there that night told him that they were instructed to use the non-lethal beanbags first. It's a policy that doesn't make sense to Kent Terry.

"You go up against a bandit crew that is carrying AKs, and you walk out there with guns loaded with beanbags - I don't get it," Terry said in a phone interview from Michigan. "It's like going to the Iraqi war with one knife. It boggles my mind. ... These guys (Border Patrol agents) are professionals; they should be able to use their judgment call on their own."

On the night of the deadly encounter, agents were trying to apprehend at least five suspected illegal immigrants. One agent, using thermal binoculars, spotted two men carrying rifles. When the group came close, at least one agent identified himself as police and ordered the men to drop their weapons.

Here's how the rest of the events are described in the FBI document:

"Border Patrol agent Brian Terry was shot with one bullet and died shortly after. One of the suspected illegal aliens, later identified as Manuel Osorio-Arellanes, was also shot."

The search warrants were requested to examine fingerprints and a hair sample from Osorio-Arellanes, who was one of four men arrested that night near the shooting scene. The other three arrested, illegal immigrants from Mexico, have been cleared in connection with the crime and deported back to their home countries.

Osorio-Arellanes has not been charged in connection with the fatal shooting. He has been charged only with illegal re-entry after deportation and is awaiting a May 10 trial. The FBI document represents the first time his name has been included in a public document related to the shooting.

Two days after the shooting, Osorio-Arellanes agreed to talk to FBI agents. He was traveling with four others that night, all of whom were armed, Osorio-Arellanes told investigators, according to the document.

Two firearms were recovered at the scene that are believed to belong to the suspects, the documents say. Officials were planning to take Osorio-Arellanes' fingerprints to compare with those found on the two weapons.

The summary provided in the search warrants is only a snapshot and does not include all facts known by investigators, FBI agents wrote in the three separate search-warrant requests filed in U.S. District Court in late December.

Terry, 40, of Michigan, was a member of a specially trained tactical unit known as Bortac. On the night of the shooting, Terry and his crew were targeting a "rip crew" that robbed and assaulted drug runners and illegal immigrants, said Homeland Security Secretary Janet Napolitano.

This week, the Terry family received the autopsy report, which shows that Terry was shot once in the lower back, about 29 inches down from the right shoulder, Kent Terry said. Brian Terry was trying to turn, likely for cover, when he was shot, Kent Terry said. The bullet found inside his body was one used with AK-47s, he said.

The report gave the family some closure, and it erased any doubt about friendly fire being a possibility in the fatal shooting, because agents don't use AK-47s, Kent Terry said. The FBI announced in mid-February that it had ruled out friendly fire, but Kent Terry remained skeptical because he hadn't seen the autopsy.

The Terry family remains upset about allegations that the Bureau of Alcohol, Tobacco, Firearms and Explosives allowed a gun smuggler it was investigating to purchase and smuggle into Mexico the weapons used in the shootout in which Terry died. The Justice Department has denied the allegations, but U.S. Sen. Charles Grassley, R-Iowa, continues to insist on the validity of the claims.

"Your government is telling you to use beanbags, but you are selling guns back to the Mexicans," Kent Terry said. "There's a lot of questions that they haven't answered."

The FBI investigation remains ongoing, said agency spokesman Manuel Johnson. No arrests have been made. The U.S. Attorney's Office in Arizona said investigators and prosecutors aim to bring criminal charges against the people responsible for Brian Terry's murder.

Terry, 40, was the 10th agent to die on duty in the Border Patrol's Tucson Sector since 1926 and the first agent shot to death since 1998. Terry was buried in his hometown of Detroit on Dec. 22, and hundreds attended his memorial service January in Tucson.

Why an ex-Russian officer is feeling the army call-up

Colombia and Venezuela to reopen borders

Colombia and Venezuela to reopen borders

Border Patrol Agent Brian Terry, 40, was shot and killed in Arizona just north of the Mexican border after encountering what authorities said was a group of bandits known for robbing illegal immigrants as soon as they crossed the border. (Photo courtesy U.S. Customs and Border Protection/Detroit Free Press/MCT)
© Copyright 2022 Arizona Daily Star, PO Box 26887 Tucson, AZ 85726-6887 | Terms of Use | Privacy Policy | Do Not Sell My Info | Cookie Preferences
Powered by BLOX Content Management System from TownNews.com.
You don't have any notifications.