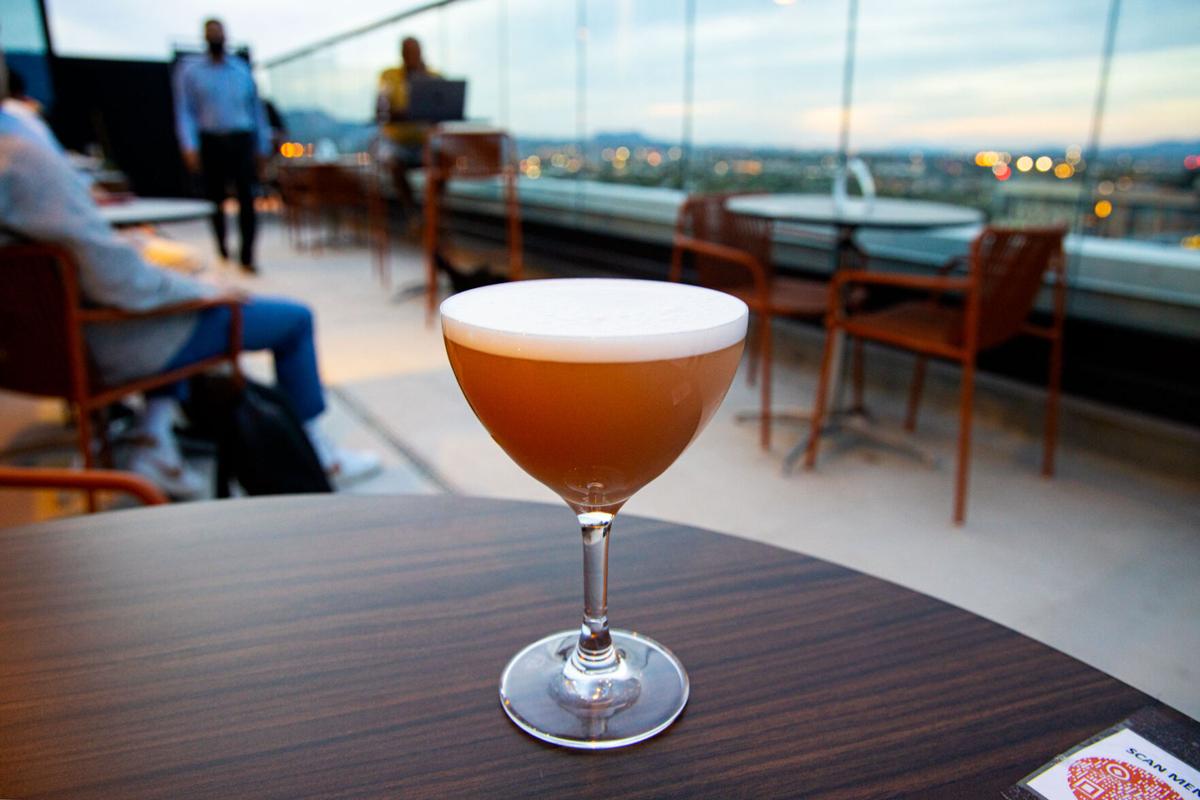 The Sonoran sunset, $15, at The Moonstone on top of the Graduate hotel features Whiskey del Bac with prickly pear juice and Cointreau. 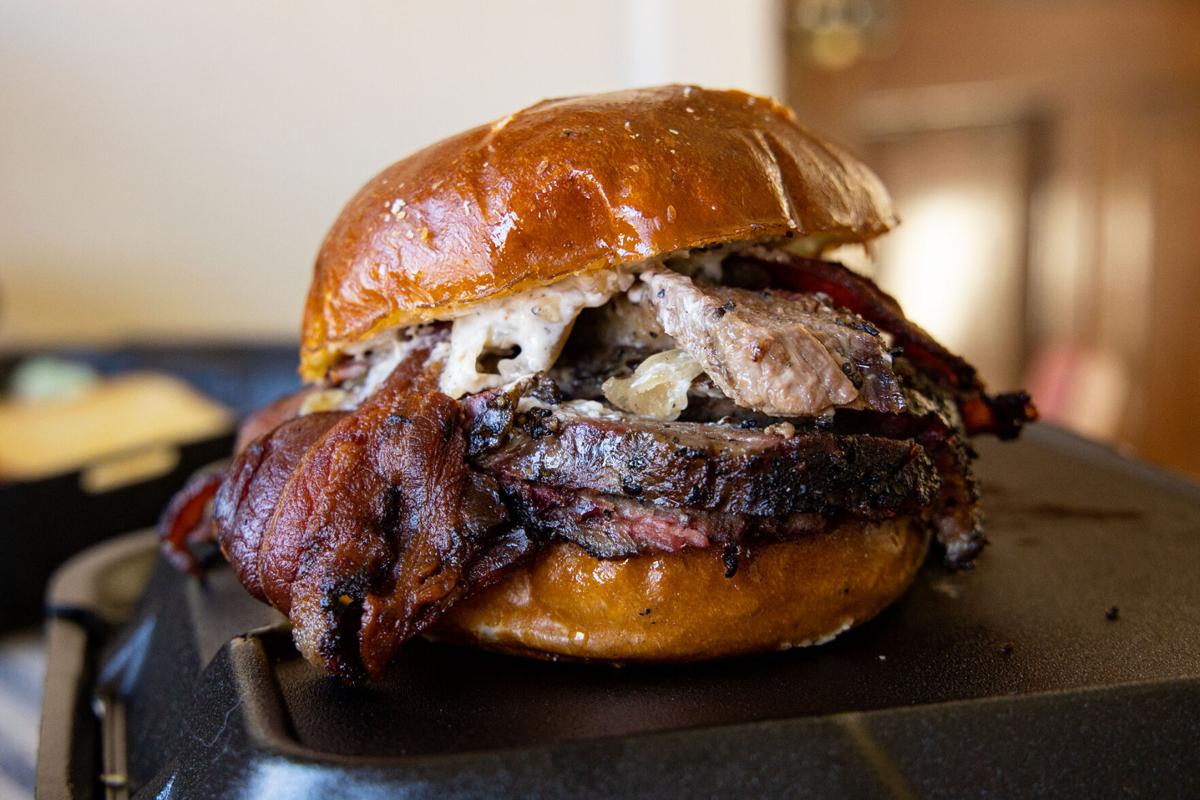 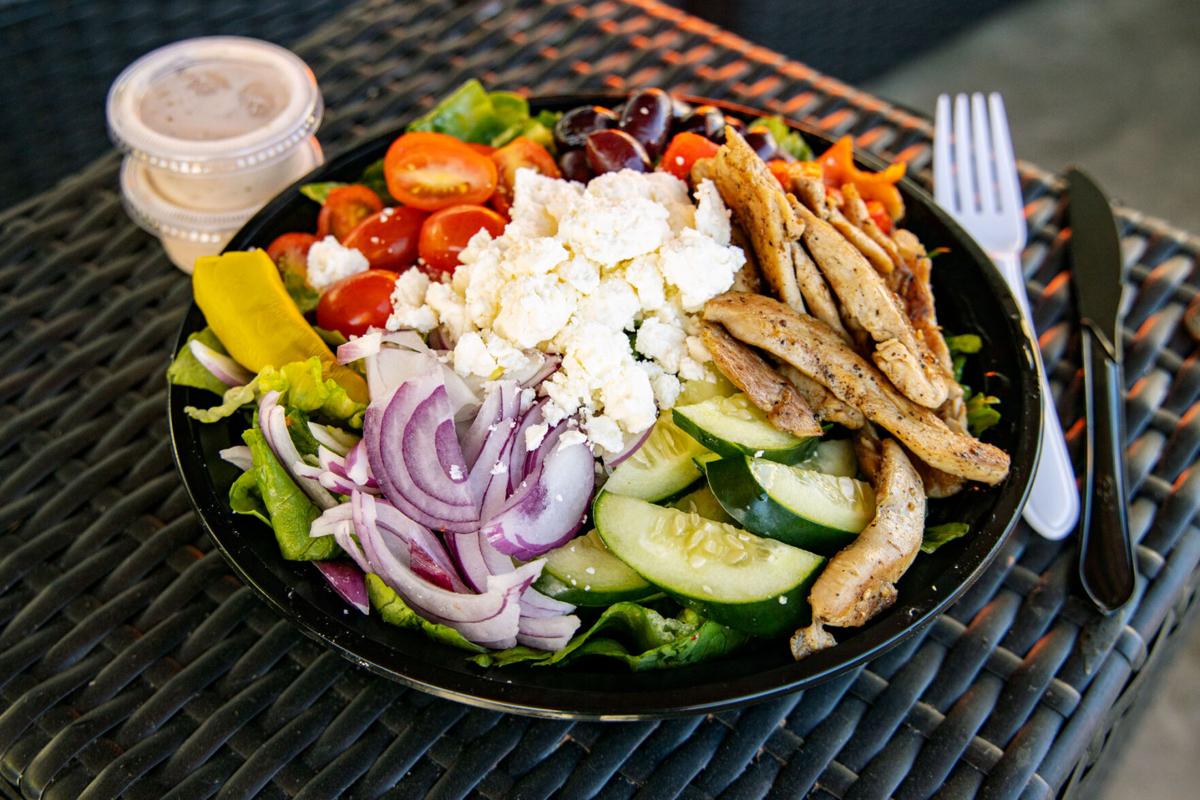 The Greek salad with chicken, $12, from So Fresh has fresh Feta along with cucumbers, olives, pepperoncini and more. 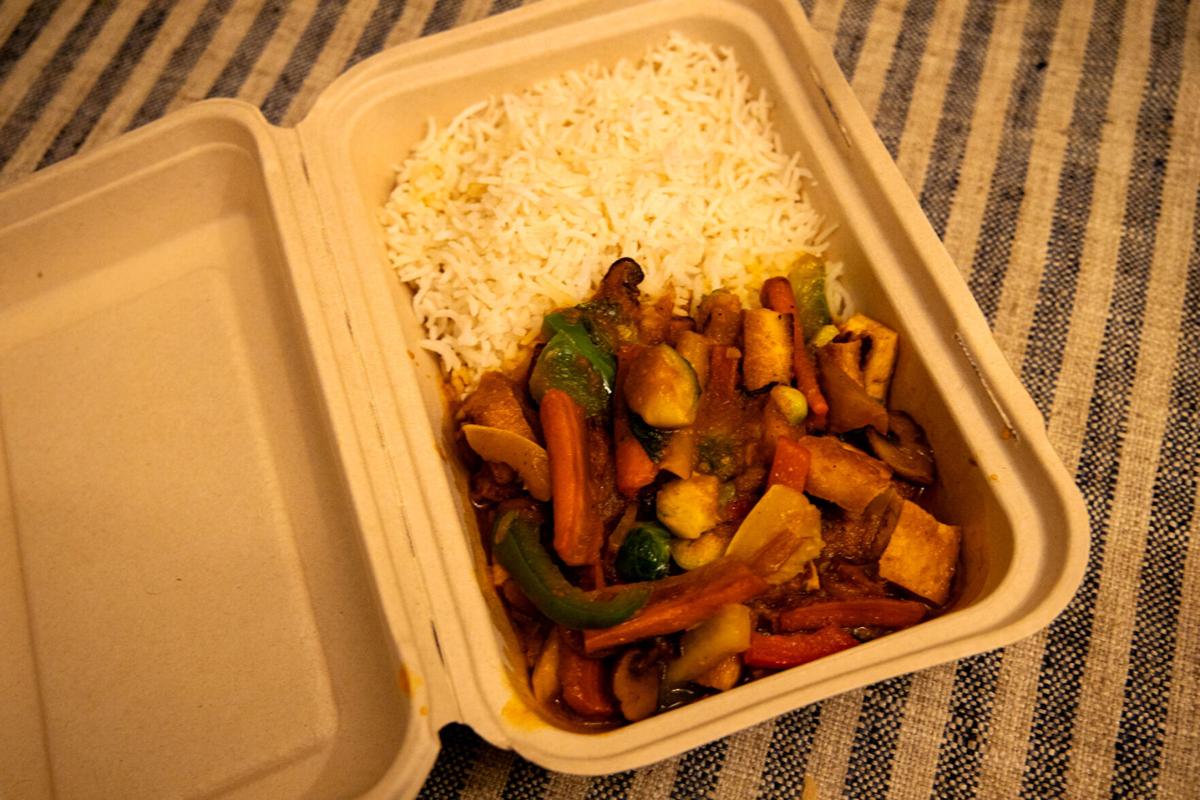 My vegan tofu curry rice bowl, $10.99, from Lemongrass was packed with veggies like bell peppers and Brussels sprouts. 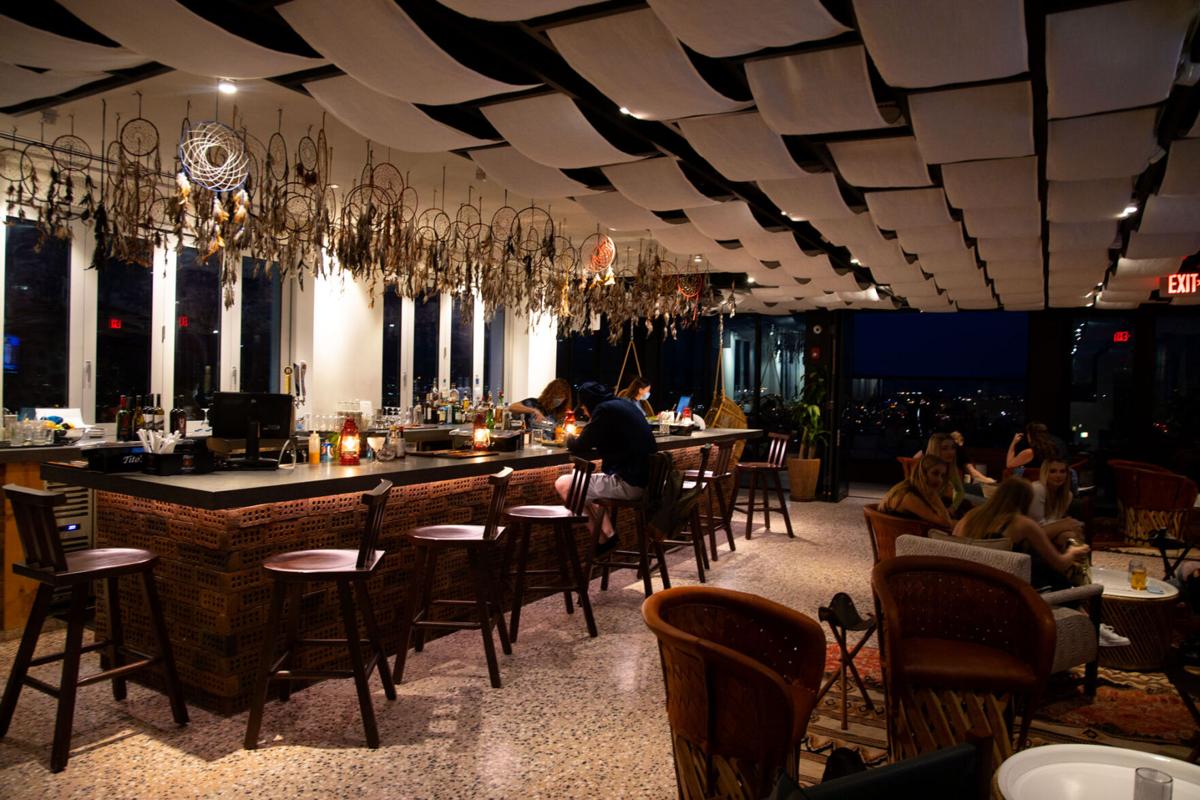 The inside bar at The Moonstone has a bohemian Southwest look, complete with dozens of dreamcatchers flowing from the ceiling.

Are you ready to get high? (Up in the air, silly.) I just did it last night, and I can tell you it was one of the most incredible experiences of 2020. I was at the brand-new rooftop bar at the Graduate hotel on the University of Arizona campus, while 20-somethings drank bright blue adult Capri Suns from little plastic baggies.

I felt old, but incredibly happy as the city lights twinkled around me and the world seemed to open up again. Whiskey will do that to you. But since I'm in a mood for celebrating, here are a few more places to have some fun. For lack of a better word, I'm totally in love with the new barbecue joint by the Serial Grillers folks. It's definitely upping Tucson's barbecue game, and that fatty brisket is a work of art.

Before you leave us, make sure to check out the "on the horizon" section of this article for what's coming up. Have you read about Mutts yet? It's a dog park that serves cocktails, and that's all you need to know!

Pitmaster David Martin is a meat whisperer. And now, one of Tucson's biggest barbecue talents is teaming up with the Serial Grillers folks to bring us an approachable barbecue joint in the home of the original Serial Grillers on Speedway. Martin's first restaurant Red Desert Barbecue on Prince catered to barbecue purists who came for the juicy meat. But Boulevard's menu is a little more playful, with funky sandwiches and hybrids like a pulled pork burger. Anything with this guy's brisket is unbelievable. If you don't want to get it on the platter, may I suggest the brisket horseradish sandwich, pictured above. (I don't usually eat meat, but when I do ...) Also, they have fantastic beans and coleslaw, so load up on those sides. Read more.

To bring in more revenue, local business Garrett's Family Steakhouse signed on to a program called Nextbite, a ghost kitchen enterprise that sells to third-party delivery apps. Garrett's is rolling out several new concepts meant specifically for Uber Eats, Doordash, Postmates and GrubHub. The most well-known is HotBox by Wiz, which sells stoner snacks and Southern barbecue like macaroni and cheese and blazed ends. Its spokesman is rapper Wiz Khalifa, who appears on all its branding but is definitely not the dude making your Hot Cheetos buffalo mac bites. Unfortunately since Garrett's is on the far east side, I wasn't able to get this delivered to the Fourth Avenue area. But now that weed is legal, I look forward to a HotBox night sometime soon. 🤪 Read more.

Perched high atop the brand-new Graduate hotel at the University of Arizona campus, this trendy rooftop bar is like the top of Tumamoc, with booze. Meaning its got a stellar view, which you can see from the panoramic patio bar (pictured at the top of this story). I have trouble not calling out the fact that the Southwestern chic interior is filled with dreamcatchers, a questionable move in 2020. But most of us will probably be outside looking at the twinkling city anyway. Also, my Sonoran Sunset cocktail with prickly pear was lovely and light for being Del Bac whiskey based. Sipping it high in the sky was definitely a treat.

The former crepe place on Fourth Avenue is now an "Eastern Asian health food restaurant" called Lemongrass, which serves curries and noodle dishes with lots of vegetarian and vegan options. Lemongrass is owned by Tank Ojha, who is originally from Nepal and also owns Everest Souvenirs down the street. He described the menu as sort of a fusion, with different influences from across East Asia. The options are numerous here, so I kept it simple with a tomato-based tofu curry rice bowl. It was packed with vegetables like carrots, bell peppers and Brussels sprouts, and had a gentle sweet flavor unlike the fiery curries you might get at an Indian restaurant.

The South Fourth Avenue food hall American Eat Co. is usually all about meaty tacos, sandwiches and pizza, but a new vendor is bringing on the HEALTH. So Fresh Salads has a simple but well-executed menu of fresh salads, including some customizable options as well as standards like a Caesar and a cobb, and the yummy Greek salad you see above. (Nothing crazy here, but fresh ingredients and good flavor.) The shop is run by Tai Ung and Nene Vargas of Monster Sonoran Hot Dogs, also at American Eat. Tai also told me I have to try the tofu, which is fried almost like tempura. Judging from the picture, he is definitely right.

— Fire Truck Brewing, formerly known as Sentinel Peak, is opening its latest brewpub in Oro Valley this Friday at 11 a.m. It's located at 9630 N. Oracle Road, suite 110. Read more about the grand opening event on Facebook.

— Tucson is getting a dog park restaurant next year, when Texas-based chain Mutts opens up. The concept is basically a giant dog park with a bar and food, writes Gerald M. Gay in the Arizona Daily Star.

— Locale Neighborhood Italian is getting closer to opening up inside the former Old Pueblo Grille spot at 60 N. Alvernon Way. A Facebook post says they're hiring this week.

— The team at Prep & Pastry is taking over the Rincon Market space at 2513 E. Sixth St., and plan to create a market space as well as a restaurant and bakery called Flora's Market Run. Read more in the Arizona Daily Star.

— Pops Hot Chicken is moving into the to TallBoys space on Fourth Avenue the first week of January. He plans to have a full bar and late-night hours for local bar dwellers.

This historic downtown space is reopening after months of closures, with a new name and a consolidated menu that includes brunch favorites from TallBoys on Fourth Avenue.

The All Souls Procession virtual ceremony goes live this weekend

There livestream of the Tucson, Arizona ceremony will feature music, dance and the cathartic burning of the offerings placed in the urn. The All Souls Procession is a Tucson tradition.

This rooftop bar is at the top of the new Graduate hotel at 930 E. Second St. The view from the patio bar is stellar.

In a spot on Fourth Avenue that once sold crepes is now Lemongrass, which bills itself as an eastern Asian health food restaurant. Find it at …

One can find a simple menu of fresh salads here, some customizable.