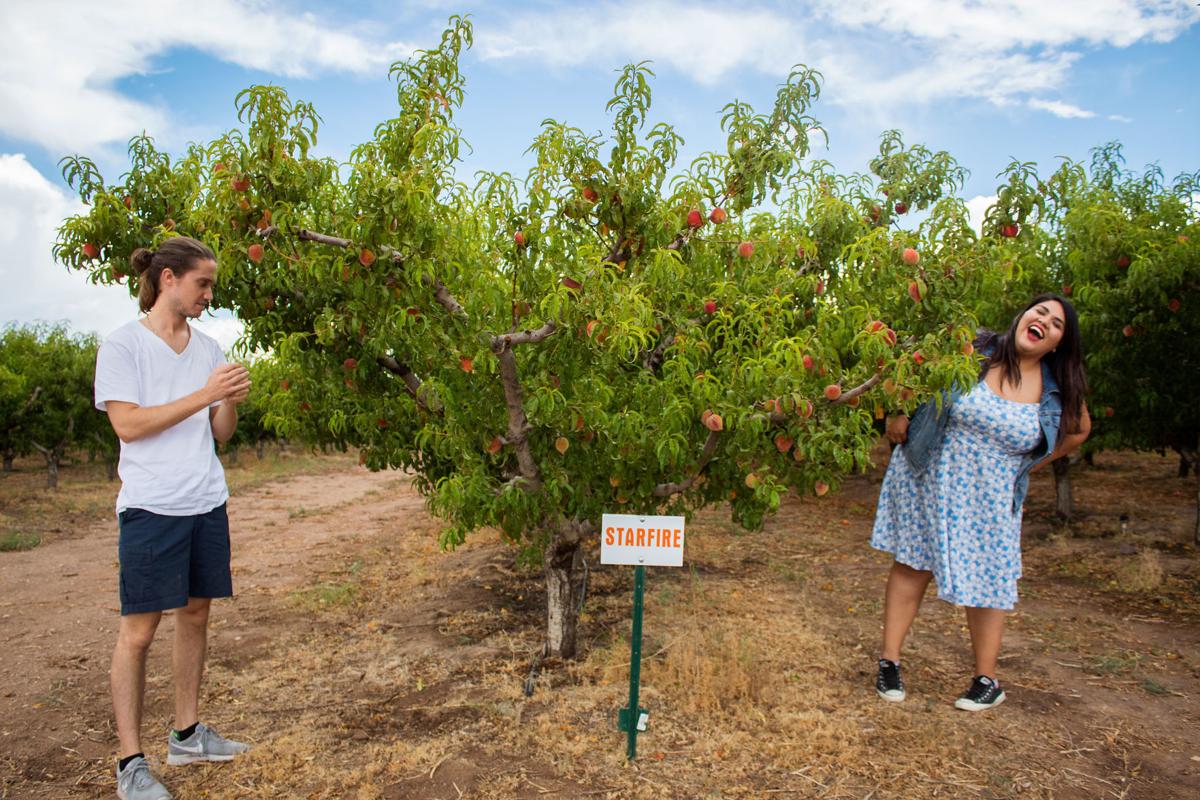 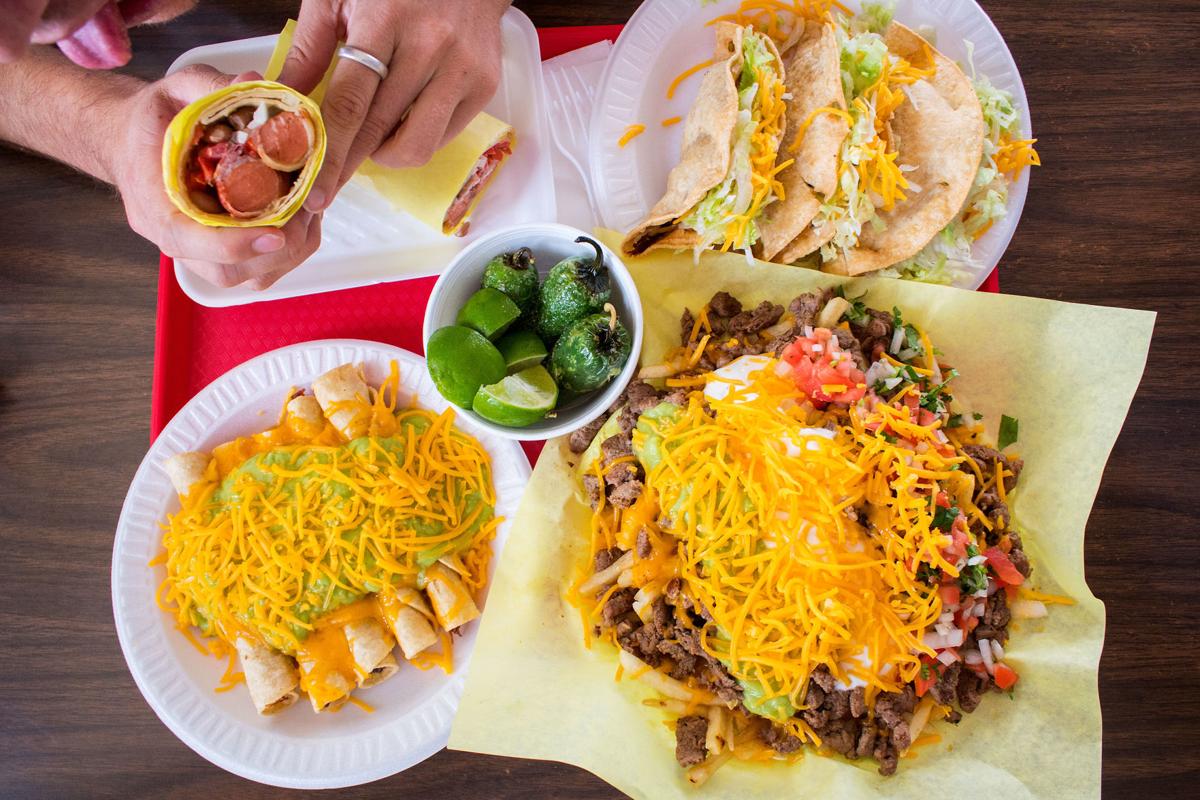 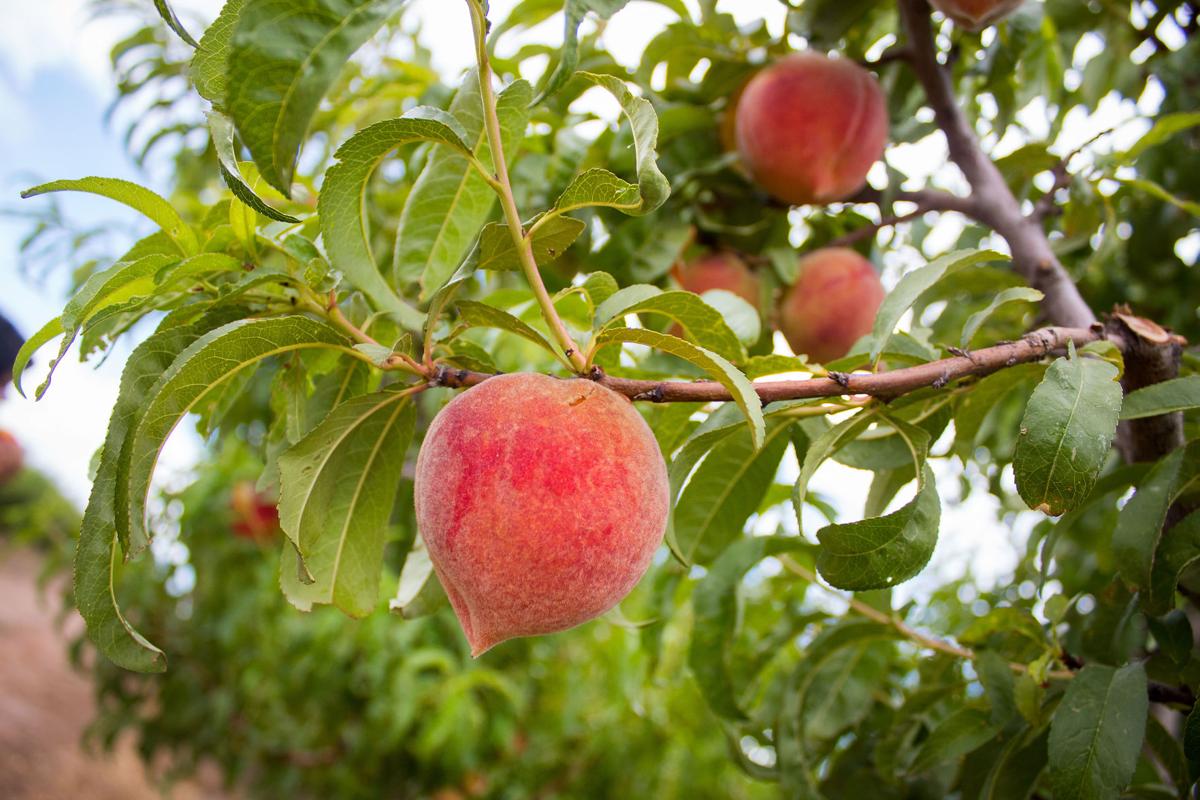 A Starfire peach, ripening on the vine at Apple Annie's for maximum flavor. 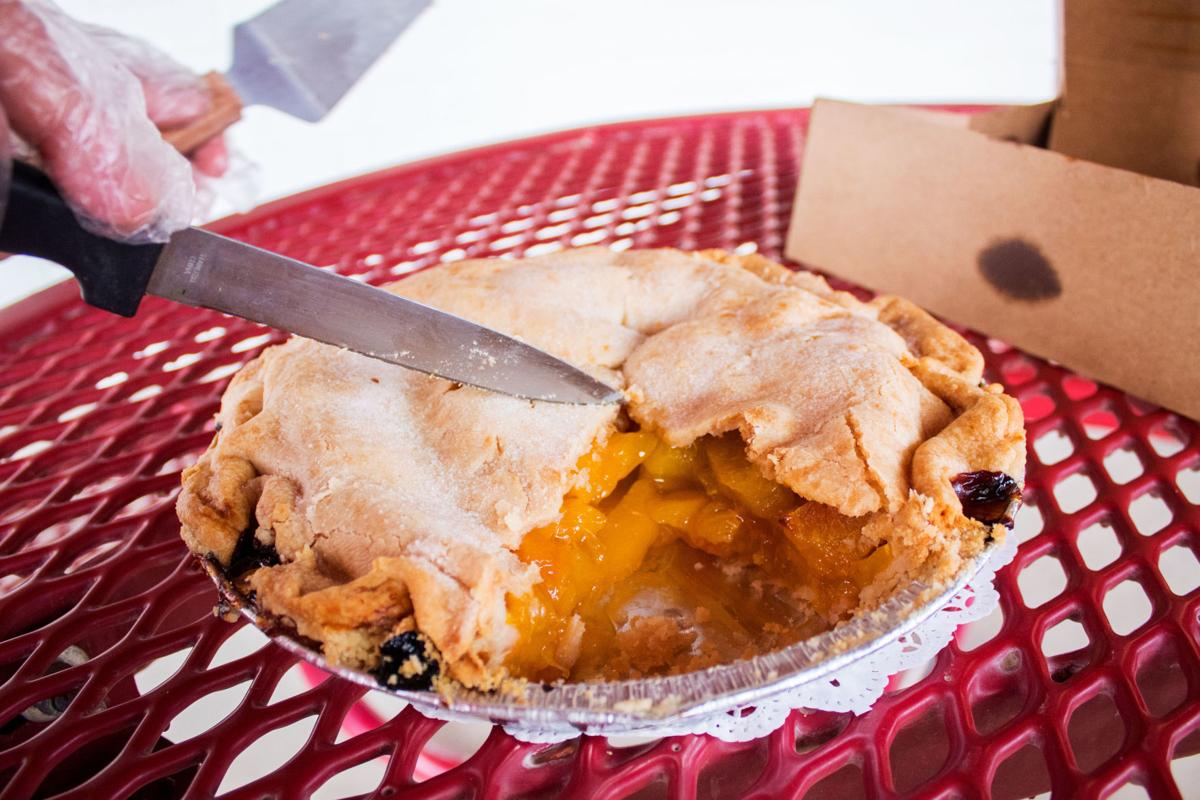 The gift shop at Apple Annie's U-Pick Orchard also has peach pie for $14.99. 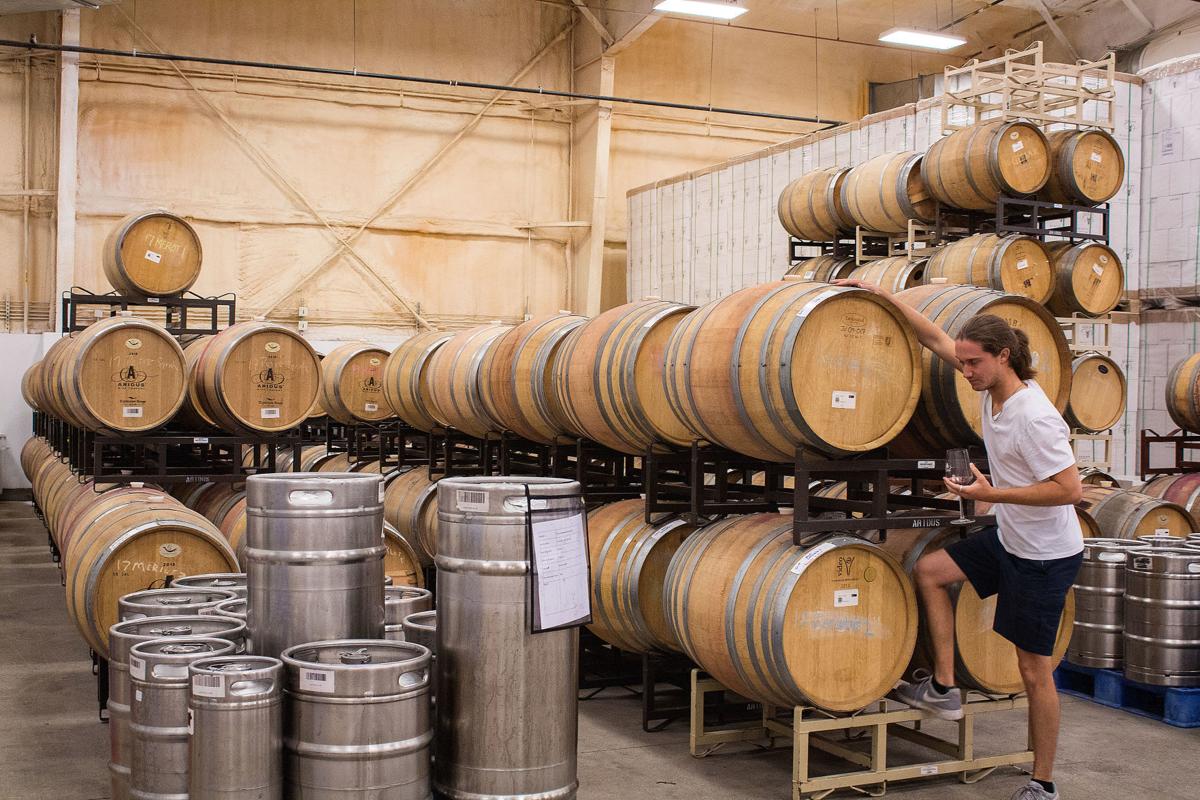 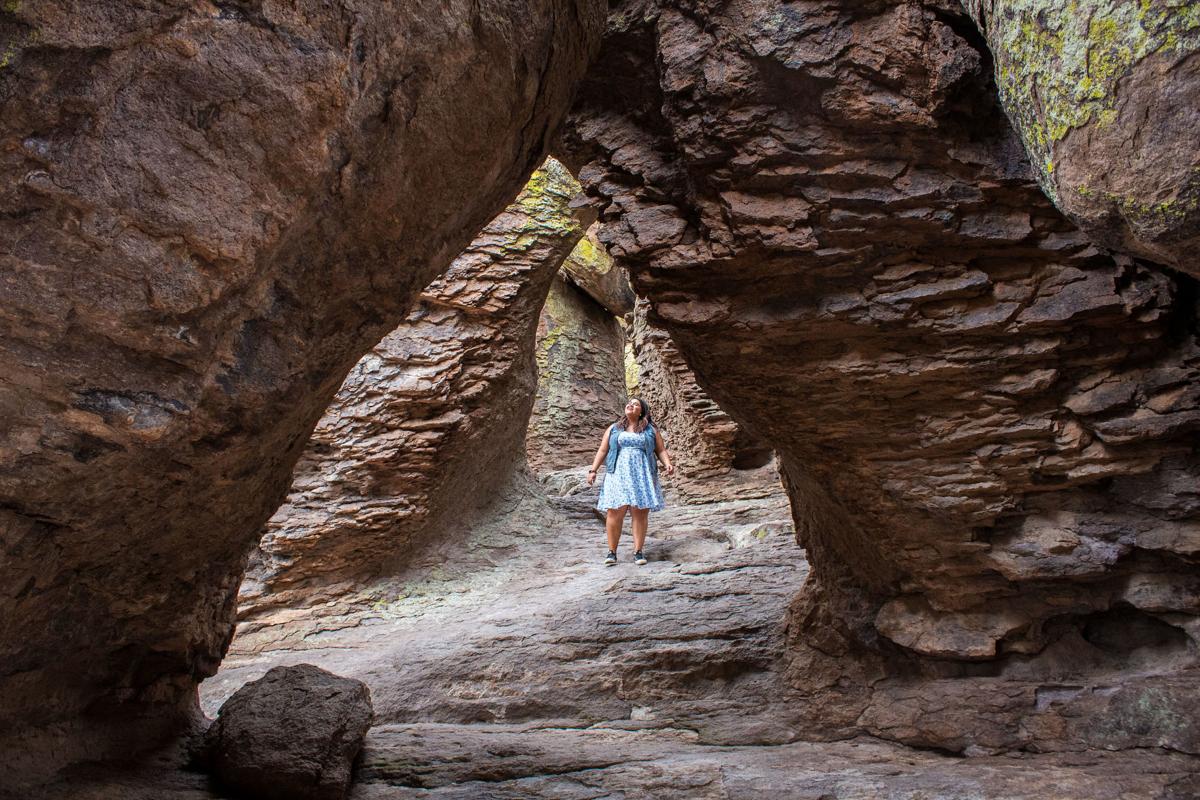 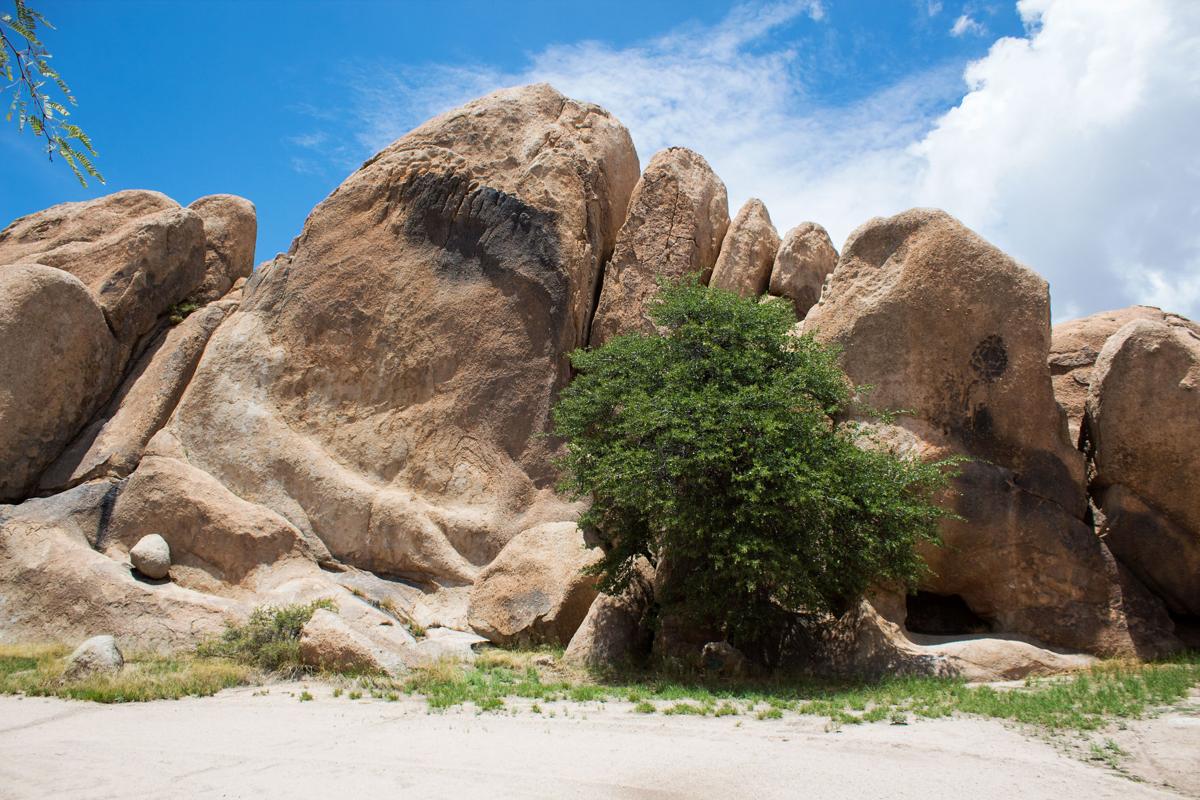 A rock formation at Texas Canyon, near the Amerind Museum. 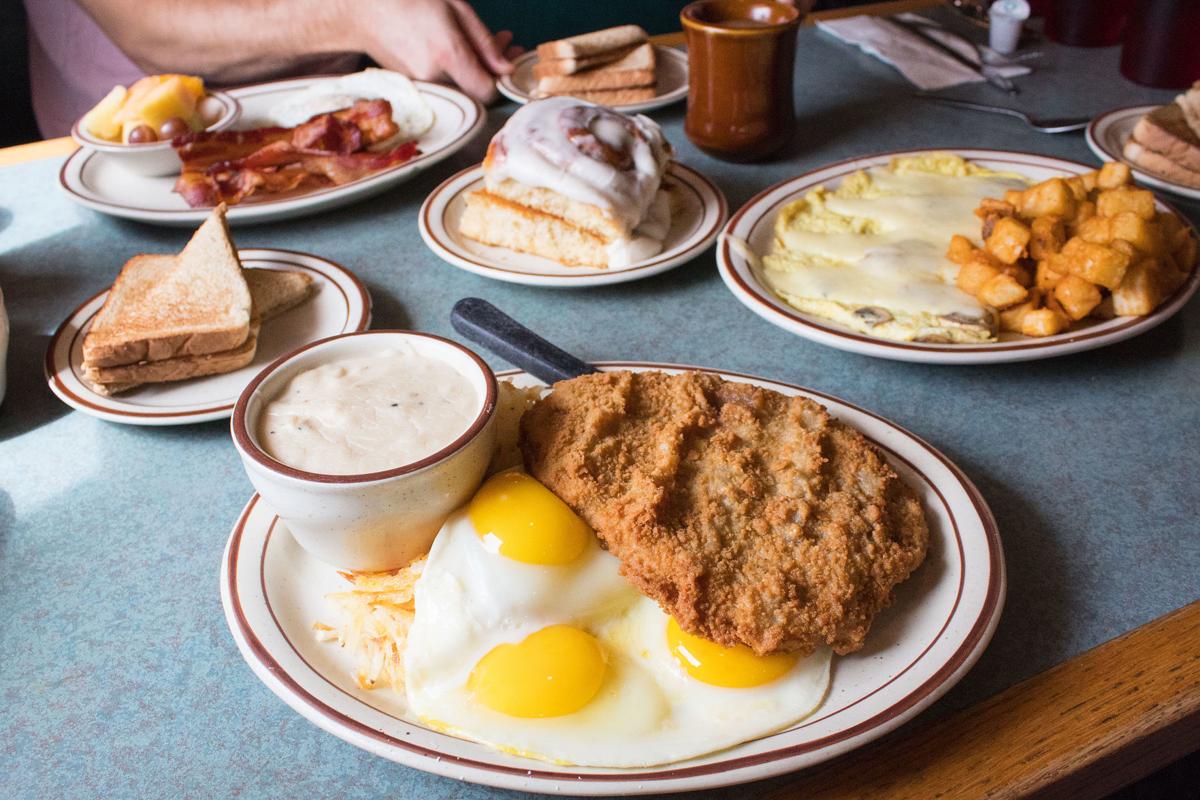 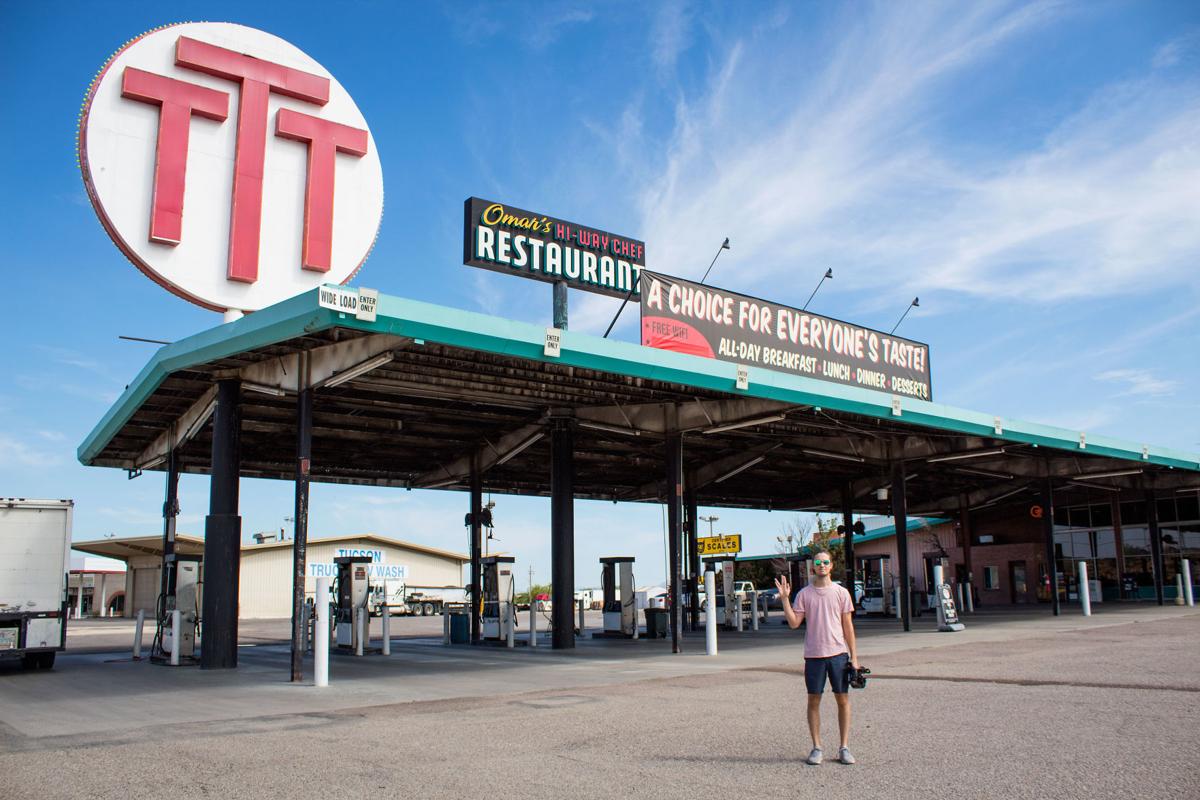 Stop at the Triple T truckstop on the way out of town for a kitschy moment. 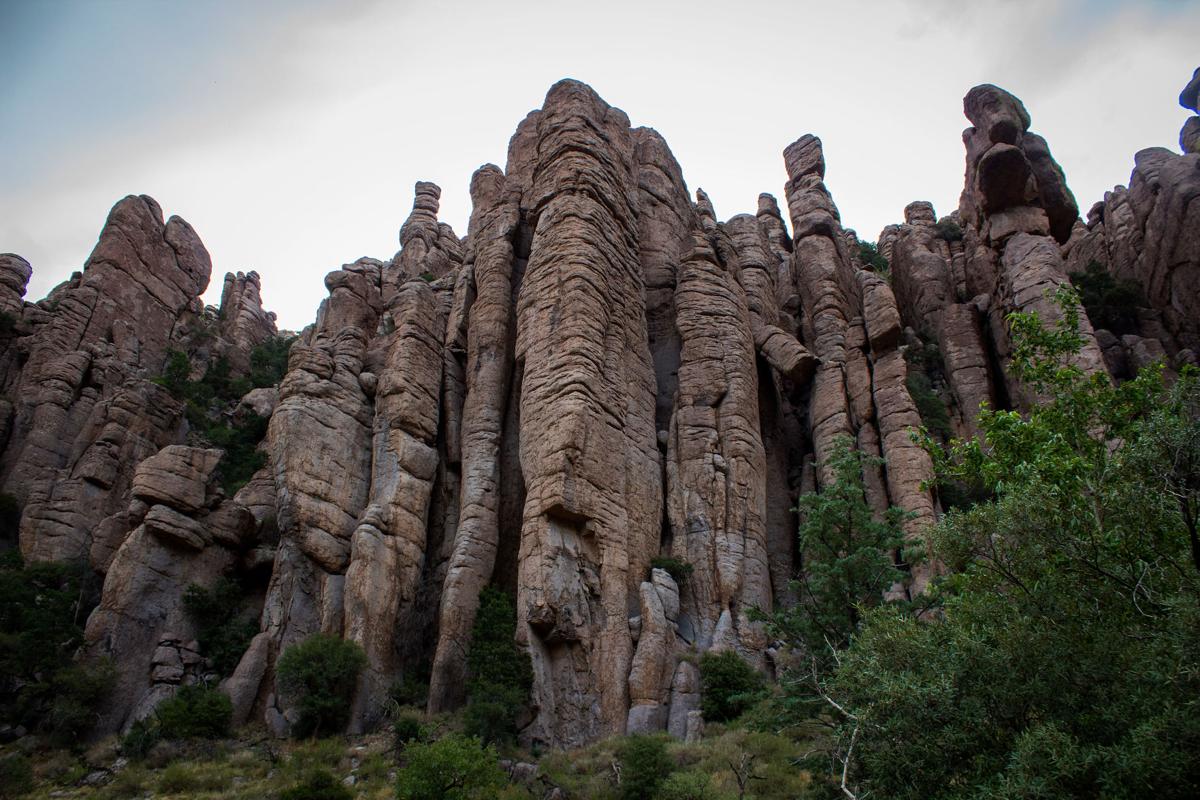 Sights from the Chiricahuas

Imagine a place with millions of peaches, peaches for free! Where you can reach out your hand and grab one from the tree, sinking your teeth into its sweet peachy flesh, perfectly ripe ...

That place is called Apple Annie's in Willcox, Arizona. And while the peaches aren't technically free, it's gonna be fine if you take one or two for a "sample" while you're picking. Late summer is peach season here in this Southeastern Arizona town, and Tucsonans travel here for a taste of the country during the monsoon summer rains.

July and August are prime times in Willcox, because the landscape is littered with u-pick-em farms that grow local pistachios, pecans, chiles and more. This self-proclaimed "Cattle Capital of America" is also Arizona's biggest wine region, and harvest season is right around the corner.

So if you're ready for a wet and wild adventure filled with monsoon storm clouds, breathtaking rock canyons and quirky roadside stops, Willcox is gonna be your jam.

The #ThisIsTucson road trip team recently took this trip together, and here's what we think you should do!

On your way out of town, grab some breakfast at the Triple T

Willcox is just over an hour's journey east from Tucson, so you might wanna grab something along the way. We went the kitschy route with the Triple T truckstop, conveniently located along I-10 East on the edge of town. Its house diner Omar's Hi-Way Chef is a two-room spectacle of Southwestern flair. We could hear them pounding our chicken fried steak in the back before they brought it out, delicately positioned on a palette of three sunny-side up eggs. You've also gotta try one of their cinnamon rolls. Get it split in half and grilled, with butter in the middle.

Other breakfast options along the way:

Get out and rock at Texas Canyon

About 15-20 miles east of Benson you'll notice a sudden change in scenery: massive boulders all around, some piled hundreds of feet into the air. Texas Canyon features sweeping vistas of granite rocks that you can see from the rest stop at Exit 321. Get out and have a quick picnic among the boulders, or just stretch your feet and take a selfie. You can also take the Dragoon Road exit and climb some rocks around the nearby Amerind Foundation, an archaeological museum.

If you're a fan if the strange and unusual be sure to check out Bowlin's The Thing, located on North Johnson Road. This roadside attraction/gas station/gift shop/Dairy Queen is just a skip away from Texas Canyon. Recently, The Thing has been undergoing major renovation with a new oddities museum that's set to open Labor Day weekend.

You can also check out nearby:

The scenic drive through Willcox’s open country this time of year is nothing short of dreamy. Its flat farming landscape makes it easy for you to spot a monsoon storm happening in the distance as you putter your way down a quiet road.

On 2081 Hardy Road you can find Apple Annie’s You-Pick Orchard. What was once a small apple farm in the 1980s has grown into a family business that offers a variety of produce, baked goods and preserved foods to people who trek from all over Arizona to visit their three locations in town.

Right now, Apple Annie’s Orchard is revving up peach season with its annual Peach Mania event  happening the weekend of July 21. If you can’t make it, don’t worry, the orchard is open Tuesday through Sunday from 8 a.m. to 5 p.m. till the end of September. Pick from a few peach varieties and pay for them by the pound at the cashier station.

The site also has a store where you can pick up fresh pies, homemade fudge, salsa and “every kind of jarred good you could imagine.” And if you’re buying some stuff for a friend, visit the gift shop located just above the bakery. On the weekends Apple Annie’s hosts an all-you-can-eat pancake breakfast, so you can fill up before heading out to the orchard. Sounds peachy to us!

Seventy-five percent of the wine grapes grown in Arizona come from the Willcox area, which has unique soil that's rich from ancient volcano ash. Popular varietals grown here include Syrah, Sangiovese and red blends you might see in the Rhone Valley of France. Aridus Wine Company will take you on a tour of its massive facility, which used to be an Apple Annie's packing plant. For $25 apiece we were able to taste Cabernet Francs and more straight from the barrel, before the public can enjoy them. You can also visit their tasting room at 145 North Railview Avenue in downtown Willcox, where they'll waive the tasting fee if you buy a bottle of wine.

Quick lunch before you head out to the mountain

Willcox excels in its fresh produce and wine, but restaurant options are still a little limited. (Especially now that the town's main tourist attraction, the Big Tex BBQ train car, is temporarily closed because of a fire.) Everyone in town is raving about the Double S Steakhouse that just opened by the I-10 exit, but if you're just getting lunch we suggest grabbing some yummy Mexican food and heading down the road. Formerly a fast food burger spot, Adolfo's is now run by a family from Agua Prieta, Sonora who makes some solid burritos including a Sonoran hot dog burrito called the Burro Dog. The beef tacos are a great bet too, but that's a given.

After you’re done filling up on some food, it’s time to take a 37-mile drive southeast of Willcox to Chiricahua National Monument. Called the “Wonderland of Rocks,” this wilderness spot will make you feel like you’re on another planet — as giant rocks of all shapes tower around you.

Why is this place so breathtaking? Because 27 million years ago a giant volcanic eruption happened that sent ash and molten debris flying into the earth. All of this hot stuff eventually transformed into rhyolite and eroded away into the incredible rock formations we see today.

In addition to the unique geology, the Chiricahuas has some rich human history too. These mountains were once home to the Chiricahua Apaches, who lived seasonally here for many years until the Apache Wars began in 1861. This region also has a connection to Buffalo Soldiers who were stationed in Arizona during the time of the American Indian Wars. Today, visitors can learn what it was like during this moment in southwest history by taking a ranger-led tour of the historical Faraway Ranch.

There are plenty of places to hike and explore at the Chiricahuas, but our pick for a quick trek is the Echo Canyon Loop Trail. The trailhead is located near the top of the eight-mile scenic drive into the monument. If you keep right, about a half mile into your hike you’ll come across the Echo Canyon Grottoes where you can actually walk inside some of the rock formations. The views are also pretty spectacular during this hike, so be sure to bring a camera.

There’s no entrance fees to get into the monument and camping is $20 per night. Find information on campsite reservations here.

Pro tip: Get gas before you make the trip. There are no gas stations along the way or near the Chiricahuas.

5 spots in Southern Arizona to escape the Tucson heat

Where to eat in Rocky Point: 5 food spots you gotta try

These seafood restaurants and taco joints were chosen by a local.

14 Arizona road trip destinations to check out in 2019

Arizona is an amazing state to explore. Find the best things to do and eat in Willcox, Bisbee, Flagstaff, Sonoita, Tombstone and more.

New eats! 11 Tucson bars and restaurants that opened in June and July

Also a list of what's coming up over the next few months.

Feel like a desert astronaut as you zip through rocks, time and space in this unexpected road trip to the Copper Corridor just north of Tucson.

The I-10 rest stop just got a $3.5 million remodel that you have to see to believe.

8 quirky adventures to have around Southern Arizona

Forget the fancy and go for the unusual. Here are some one-of-a-kind spots you won't believe are near or around Tucson.

Are you ready for a peachy summer adventure? Get in the car and head to Willcox, where temps are about ten degrees cooler and the trees are br…

We think three-day weekends are for adventuring.

Temperatures are back in the hundreds today.