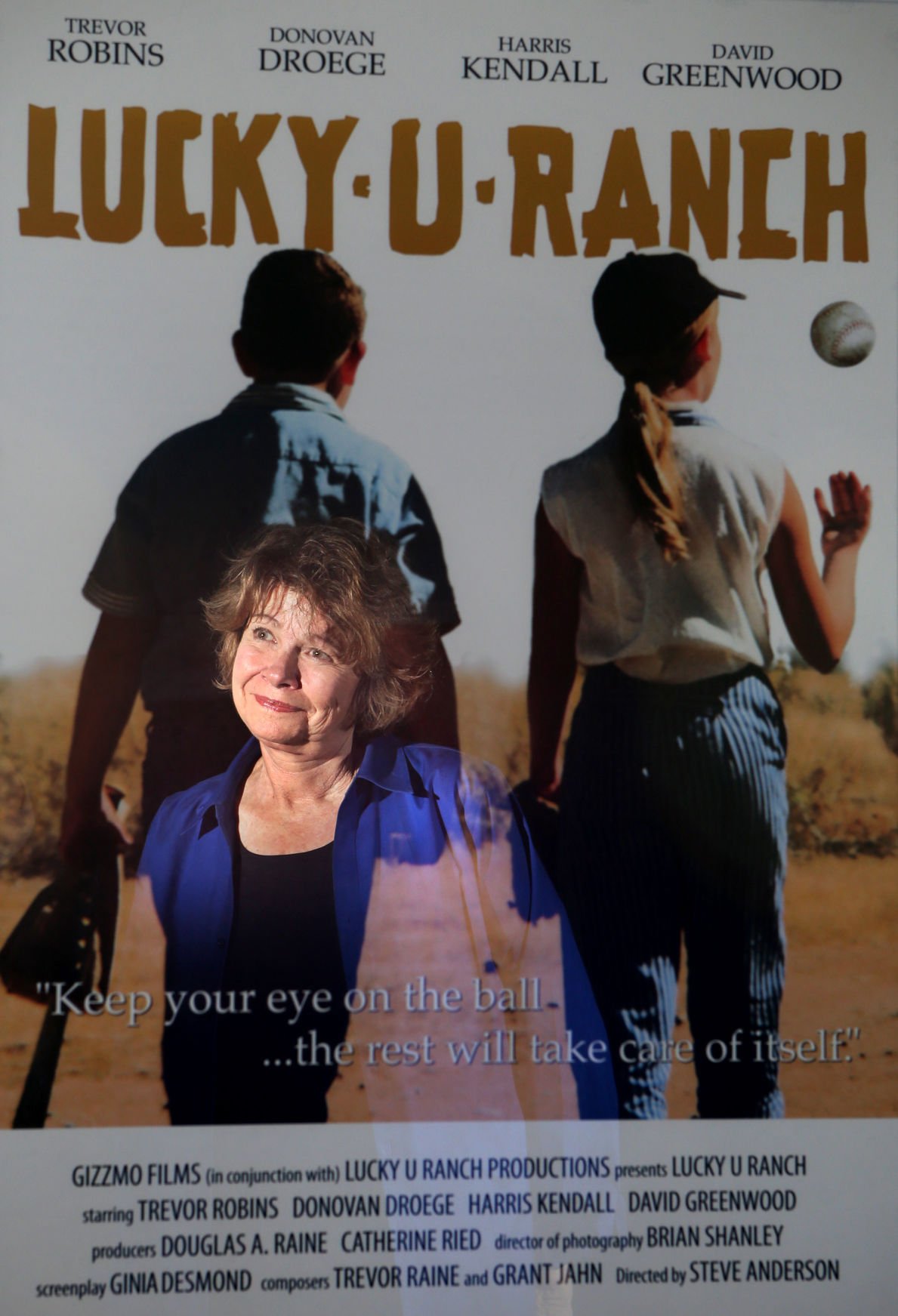 Writer and producer Ginia Desmond is reflected in the poster for her feature-length film. 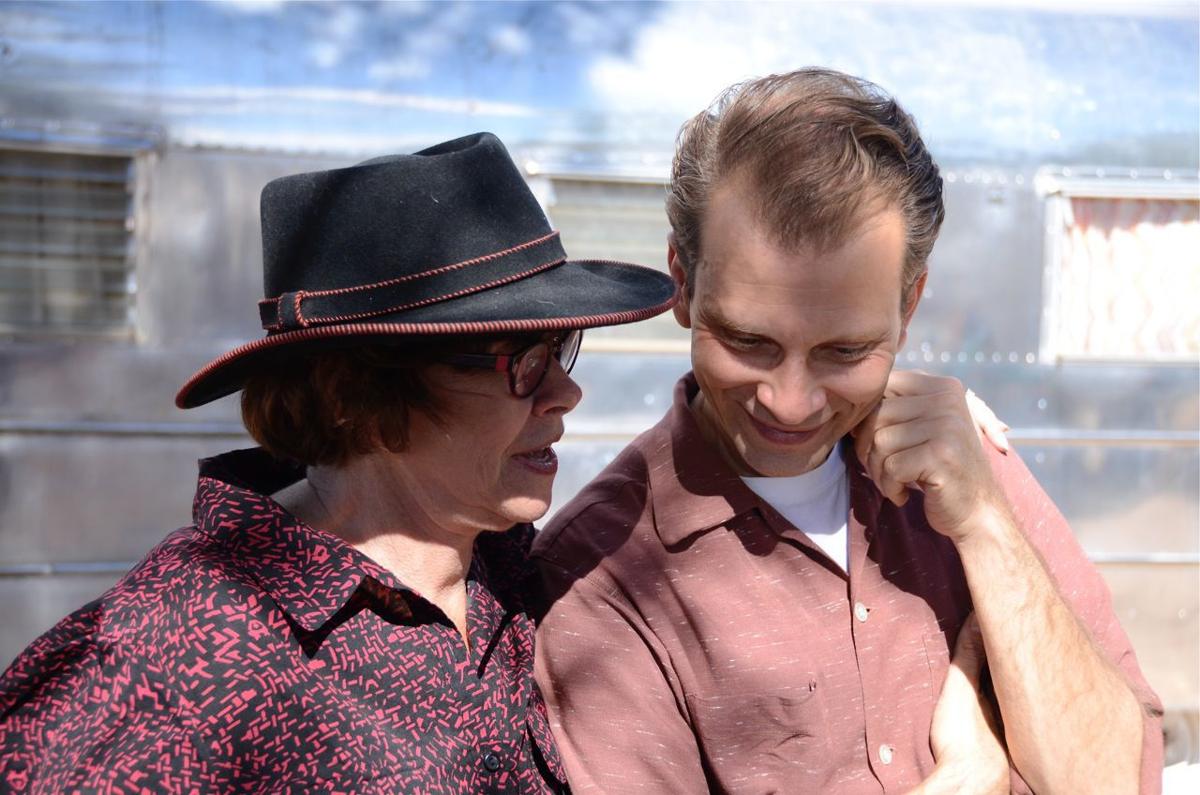 A screenwriting class at Bookmans launched Ginia Desmond on a writing career. She talks to Adam Sydney, the production designer of Desmond’s first film. 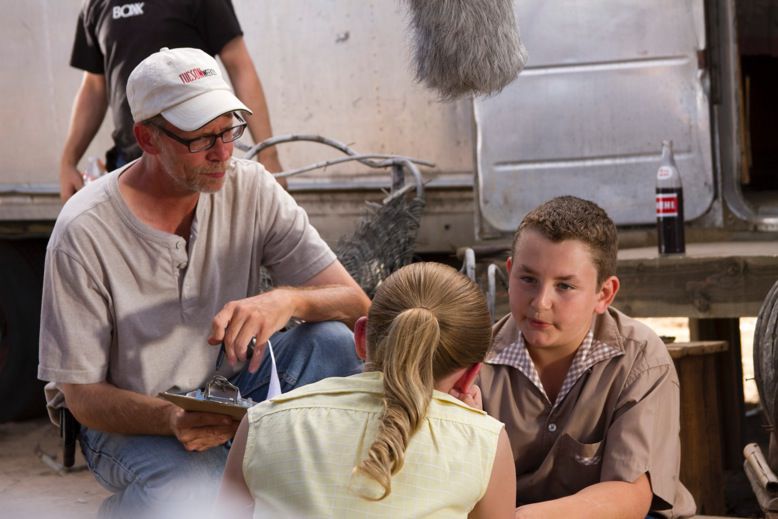 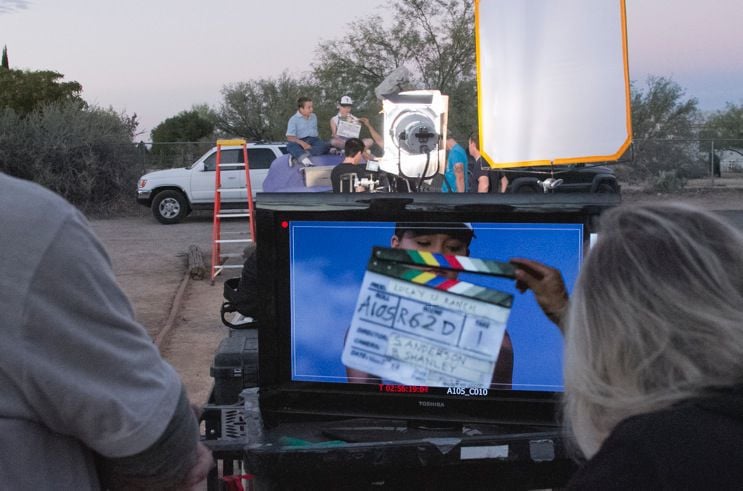 The part-autobiographical “Lucky U Ranch” was filmed mostly in a Sahuarita trailer park. 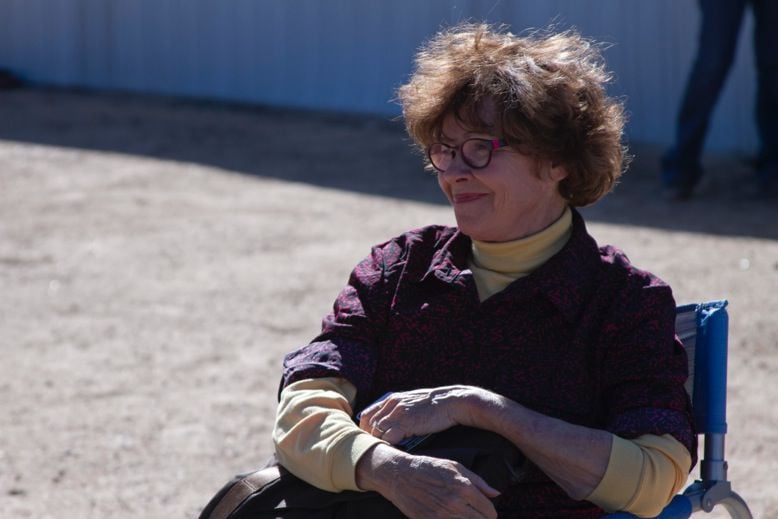 Ginia Desmond had a decision to make.

The 74-year-old has been writing scripts for a dozen years, but “Lucky U Ranch” is her first feature-length film to make it to the big screen.

That’s because she funded it.

“I consider myself the writer,” she says of the low-budget film, which so far isn’t readily available for viewing. “I wrote the script, and I wrote the checks.”

Writing screenplays is not Desmond’s first career — or even her second. This act follows others that starred Desmond as a mother and wife, professional artist and businesswoman.

As a girl, “all I ever wanted was to be a housewife and raise a family,” she says. “That was my only goal in life ... I came from a crazy family, so I wanted to do it right.”

But life had more twists and turns in store for her than one of her own scripts.

“I wanted to be the perfect wife ... I was such a ’50s girl, but I had so many different careers, and now I’m on my fourth,” Desmond says, referring to producing. “I don’t say, ‘No.’ I say, ‘Yes,’ and that gets me in trouble, but it’s also probably what makes my life interesting, too. I’m never bored.”

She has her kids — three daughters — and has had four husbands. At 32, she earned her master’s of fine arts degree from the University of Arizona and became a full-time artist. Act No. 2 — as an importer from the Philippines, Thailand and Indonesia — began when she lived with her second husband in Asia.

For almost 30 years, she imported goods such as furniture and baskets to sell in her Tucson store Sangin Trading Co. on Sixth Avenue. She sold the business in 2003.

Act Three was about to begin.

Leftover treasures from Asia still fill Desmond’s home just south of downtown, and her own art hangs on the walls — props from previous scenes, the backstory to her new story.

“Ginia is an interesting combination of very creative and very practical,” says Victoria Lucas, a Tucson screenplay consultant with a 20-year career in Los Angeles. “She has that sense of the big picture and how a business is run, and with her writing skills and talent, she has the ability to understand characters. She sees the micro and the macro.”

Lucas worked with Desmond in developing what began as a short script into a feature-length version of “Lucky U Ranch.” The shorter version of the script, under the name “Growing Pains,” had already won a Silver prize at the Page International Screenwriting Awards.

Desmond originally developed the narrative as a short story in the 1990s during a creative-writing class at Pima Community College taught by well-known instructor Meg Files.

The dream to write a screenplay emerged after the 2003 sale of her business. She intended to return to art — but she also signed up for a screenwriting class at Bookmans.

Lucas — who has spent her career working with writers — agrees.

“Her detail in a scene makes the scene come to life,” Lucas says. “Very few writers write visually so that when you read the script, it’s like you have seen the movie. ... Ginia writes like that. She has a real gift for getting under the skin of characters and making the reader or audience understand them. ... She is a treasure for Tucson.”

“Lucky U Ranch” is not Desmond’s first script. That would be “The Senator’s Wife,” a screenplay added to a production company’s library but never actually produced. Still, Desmond kept writing.

“I pretty much write all the time, but when the time came and (“Lucky U Ranch”) got made, the last thing I ever thought I would do is produce a film,” she says. “It never even occurred to me. It wasn’t on my bucket list by any means.”

But when she shared the short script with Tucson director Steve Anderson, the story captivated him.

“I read it and sat in front of the computer sobbing...” says Anderson, who identifies with the young lead Junior, played by Phoenix actor Trevor Robins. “I had never read anything quite so simple, but also deep and complex and beautiful.”

Desmond’s movie is a 1950s coming-of-age tale that takes place in an Arizona trailer park inspired by the Scottsdale park Desmond’s parents purchased and named when she was a girl — Lucky U Ranch.

The film chronicles the weekend friendship between two of the park’s reluctant residents — a bullied schoolboy, Junior, and the glamorous neighbor girl, Melissa, transplanted to dusty Arizona from Hollywood.

This story, like many of Desmond’s screenplays, takes tidbits from her own life. Like Melissa’s family, Desmond’s parents exchanged Tinseltown for a trailer park.

“I went to about 19 schools in a year-and-a-half, and both of my parents were devout alcoholics, so that comes up in the story,” Desmond says. “But I wasn’t as clever as Melissa, and I never met a boy like Junior.”

Desmond’s granddaughter Donovan Droege, who played Melissa, has heard bits and pieces of this story for years.

“It’s my grandmother’s story, and I have heard her talk about these kinds of things for a long time,” says Donovan, a 17-year-old from Denver. “I tried to place myself in her shoes.”

Desmond calls her father “a Hollywood type” who abandoned the glitz after a heart attack. Desmond’s father Oakley Haldeman worked with Gene Autry and wrote the song “Here Comes Santa Claus.” But though Desmond still has family in that world, she never expected to return herself.

Filmed mostly in a Sahuarita trailer park, the film’s uncredited star is Arizona.

Early shots of the trailer court where Melissa and Junior live showcase a vintage park in Bisbee and old cars from local aficionados cruise the streets. Many of the cast and crew call Tucson home, Anderson says.

They filmed for 14 days, and post-production wrapped up in 2015. The Scottsdale premiere came in April — a full circle for Desmond, who based the film on her family’s trailer park in that city.

The next film she hopes to make, titled “Live From the Boondocks,” would revolve around a cast of characters at the Boondocks Lounge on First Avenue.

Desmond now has about a dozen scripts to her name, including three book adaptations and several she was hired to write. One — based on the book “Santiago’s Children: What I Learned about Life at an Orphanage in Chile” — could be produced next year in Chile.

She suspects that some of her screenplays undergo up to 100 rewrites. She now leads a screenwriting group here.

With “Lucky U Ranch,” Desmond was “writing what she knew ... and I’m amazed at the detail she remembers about her life,” Anderson says.

Not all of her scripts are based on her experiences, but she has quite the bank of personal anecdotes.

“Singapore Fling,” for example, is based on a recent rendezvous with an old lover she met in Bali about 20 years ago. When they reconnected in Singapore, Desmond was 72 and her former flame was about 80. She knew she had something when he forgot her at a bus stop, forcing her to walk to the hotel.

A jaunt through Europe this summer inspired another potential plot, after Desmond met an artist who gave her a personal tour of his studio in Slovenia. It was the last day of her trip and when the artist learned, through a translator, that she was leaving soon, he told her he would marry her should she ever return.

“I’m actually planning, somehow, to write some sort of old fart comedy about Slovenia and what happened to me,” Desmond says. “It really is funny. It’s like having a fairy tale in a fairy land for a very very old woman. I don’t know. I think it has potential.”

This is no curtain call. Act Five has yet to be written.

Who she is: Screenwriter and producer, president of Independent Film Arizona

Where she lives: Sahuarita

About the film: Set mostly in Guatemala and partly in Arizona, "Ambiguity" is a thriller highlighting issues of illegal immigration from Latin American countries to the United States.

Why she wrote it: Originally from Guatemala, "I found out about all these people that were dying trying to cross the border, and it hit me that I have to do something about this, so I decided to do a short film." Friends encouraged her to make it into a feature-length movie.

Who she is: Longtime film editor who edited "Lucky U Ranch," director, screenwriter and editor of "Patagonia Treasure Trail"

Where she lives: Splits time between Patagonia and Tucson

About the film: "It's kind of a low-budget film in the mountains of Patagonia and a story of a mother and daughter who go camping in the mountains. It's sort of like a mother-daughter road trip on horseback, and the mother is an environmentalist and the dad works for the mine, so it has the mine in the background but is really about the relationship."

Why she wrote it: "One of the big things for me in making the film was I really wanted to show how beautiful it is here, because people not from the area think, 'Put a mine in Southern Arizona. There is nothing there but dirt and cactus.' I wanted to show that that's not true. There are beautiful mountains and grasslands and ranches and streams and a whole other world."

"Lucky U Ranch" is not currently available for purchase, but visit luckyuranchmovie.com for more information or to contact the filmmakers about how to see the movie.

The Grant-Campbell store is gradually moving from its home of 31 years, over to 3330 E. Speedway.

Boom Goddess Radio believes every woman has a story. And every story matters.

It’s 1953, and 11-year-old Junior McCaully is ready to call it quits. Chubby, bullied, and stuck at a dead-end Arizona trailer court with his …

For Tucson's Mrs. Green, a sustainable lifestyle begins one step at a time.

Tucson's titanium man out to inspire those weighing joint replacement

Son's suicide made this mom a mental-health advocate

Everything she does is about erasing stigma of mental illness.

One of them has Down syndrome.

Writer and producer Ginia Desmond is reflected in the poster for her feature-length film.

A screenwriting class at Bookmans launched Ginia Desmond on a writing career. She talks to Adam Sydney, the production designer of Desmond’s first film.

The part-autobiographical “Lucky U Ranch” was filmed mostly in a Sahuarita trailer park.