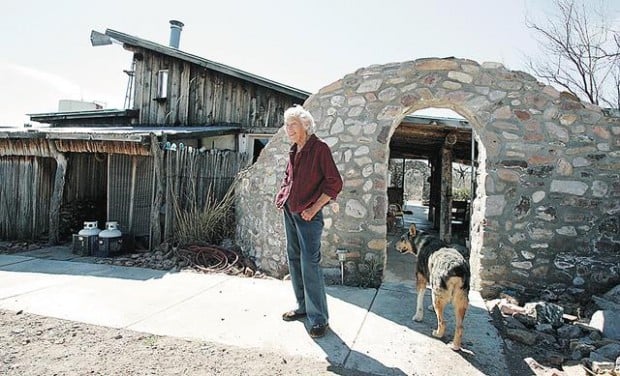 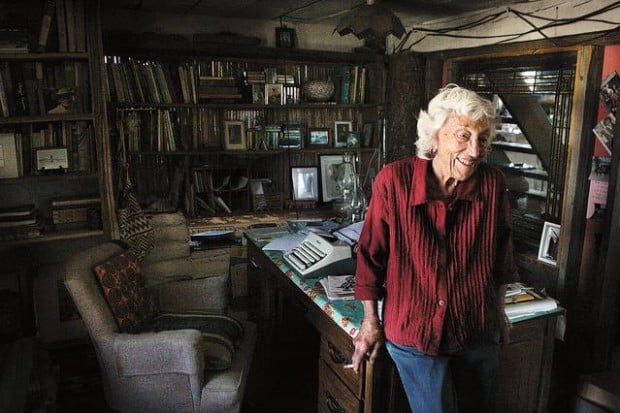 It's five miles of rutted, rocky road to Byrd Baylor's house and worth every bone-jarring dip. • At its end stands the acclaimed children's author, rail- thin, wearing jeans, a long-sleeve shirt and silver earrings. • In her driveway sits her well-mudded Nissan pickup, plastered with several stickers, among them one reading: "A tree-hugging dirt worshipper." • Her house of adobe, which friends helped her build more than 25 years ago, nestles into 35 acres down Arivaca way, about 50 miles south of Tucson.

It has a tin roof, tree-trunk posts and a windmill that hasn't worked in years. Instead, there's a generator amping up the little power that does get used.

Baylor gets her news from a portable radio, and friends regularly drop off three days' worth of The New York Times, along with the Sunday Arizona Daily Star, at a cafe in Arivaca, about six miles away.

She types out her books — 30 or so at last count — on one of three manual typewriters, then turns in the manuscripts to her accommodating publisher.

"A laptop is too much technology," says Baylor, 85. "I'm a slow worker. I love the process of writing. It's a pleasure because at some point you will find a line you really like."

Right now she's working on a collection of essays, "True Confessions of a Desert Druid" — autobiographical pieces dealing with "the insanity" of her life.

"I always knew I was going to be a writer," says Baylor. "When I was a little kid, I was sending off poems to magazines and signing them, 'Byrd Baylor, age 36.' "

Born in San Antonio, Baylor is related to the family namesake of Baylor University. Her first name comes courtesy of her mother's maiden name. "My mother was a Byrd, she was related to Admiral Byrd. It's an endless thing."

Her father, a self-taught geologist, wound up running a gold mine in Sonora "when I was a little kid," says Baylor.

By the time she was school age, the family was living in Tucson, though vacations were often spent in mining country.

Later, Baylor studied creative writing at the University of Arizona. In her junior year she married a naval ensign assigned during World War II to Bear Down Gym, then a temporary naval dormitory. The newlyweds moved to San Francisco, but the marriage did not last. Baylor returned to Tucson and landed a job with the Tucson Citizen.

"I was hired as a reporter and was supposed to do rewrite. At some time I started doing these little features. They liked those, so they let me do more."

She wrote about people on the reservation. She wrote about poverty in Tucson. But when she started to write about a well-known Tucsonan who also happened to be a slumlord, "I was cut off absolutely. I was so innocent at the time."

George Rosenberg, former managing editor at the Citizen and a "fond admirer" of Baylor, says, "Byrd was a wonderful, elegant writer. She was just too good for the trouble and culture of a newsroom. Obviously, her world was different."

In her Citizen days, Baylor had remarried, this time to Star newspaperman Dick Schweitzer, but that marriage, too, would not survive.

Meanwhile, her first children's book, "Amigo," was published in 1963. "That first one was in rhyme. It was about a prairie dog. The publisher asked me if I would make it a squirrel. I said no."

Her books, she says, reflect "all the things I love. I love the land, the animals." Inspiration comes from the daily treks she takes in the desert. "I have learned so much by walking or just sitting on a rock."

The downtrodden have also served as grist for her writings. "After I left the Citizen I joined with a few people who wanted to be of help," says Baylor, who counseled people from the Tohono O'odham Reservation who had moved to Tucson.

"The first person I went to see was put out of her house, and the house had been condemned by the county Health Department. They were sleeping in the backyard. My first day on the job, I took six people home with me. So, no, I was not a great social worker." Even so, the experience served as springboard. "That was the beginning of my novel, 'Yes Is Better Than No.' "

Her only novel, it focuses on the experiences of a poor Tohono O'odham family, and was written while Baylor was working for the late Tom Bahti at his Indian arts store.

"My father put up a sign in the store that said, 'If you don't see what you're looking for, please ask. Otherwise don't disturb the clerk on duty. She's writing a novel,' " remembers Mark Bahti, Tom's son. Tom Bahti also illustrated two of Baylor's books.

Baylor has a son, Baylor Stanley. Another son, Tony Stanley, is deceased, but she has three grandchildren from Tony.

Last summer she was diagnosed with cancer in her stomach lining. "I spent three weeks in the hospital, had surgery and then the chemo, but I blew off the last chemo.

"I was having a nutritional problem," says Baylor, a vegetarian who now supplements her diet with vitamin B-12 and gets regular blood tests. "I feel fine," she says.

While most of her writings have been classified as children's books, several, says Baylor, have appeared in adult magazines.

In March, Baylor was honored with a "Local Genius" award by the Tucson Museum of Contemporary Art for her work not only in the literary world but as a naturalist and humanitarian.

"She's an example of an artist who's living and creating work on her own terms. There's no distinction between the life she lives and the work she does, and because of that her work is exceptionally honest and original," says Lissa Gibbs, former associate director at the museum who was involved in the nominating process.

Many of Baylor's stories have been translated into other languages, including Chinese and Japanese.

"A Japanese man had heard 'Everybody Needs a Rock' in Japanese as a little kid. He decided he wanted to come and see America and see a coyote and see me. I'm not sure in what order.

"He went to the Grand Canyon first and talked to someone at the gift shop about me. That person drew a circle around Arivaca. He showed up here on a bicycle. I happened to be here. He was just a beautiful person."

And perhaps the genesis for yet another Byrd Baylor story.

Is a retail credit card worth it?

The role household items should play in your life

The role household items should play in your life

Greg Kelly, a cable channel host, has been skewered online after disparaging President Biden’s dog Champ, saying he looks “from the junkyard.”

Tips to help you cultivate a healthy soil in your Tucson, Arizona garden where we have plenty of sunshine but some specific challenges to making our soils support the plants we want to grow.

Dear Amy: My daughter is toxic. She and her husband live with me, but with my help of a hefty down payment they will soon be moving out.

While consumer choice can be a good thing, not all insurance is as essential as the ads make it seem.

Plant of the month: Indian fig

The Indian fig is a prickly pear cactus native to the Sonoran desert. This versatile plant can be used for food, has medicinal uses, and is a great hedge or shade plant.

Dear Amy: My husband and I have been married for almost eight years.

Home & away: Add world travel to your interior design

World travel and global experiences play a big role in architecture and interior design. Here are tips to help you add global elements in your home.

While you can always head to your favorite cafe to partake in this particular soup, with this copycat Panera Bread recipe you can have bowls and bowls of broccoli cheddar soup at home in just about one hour.