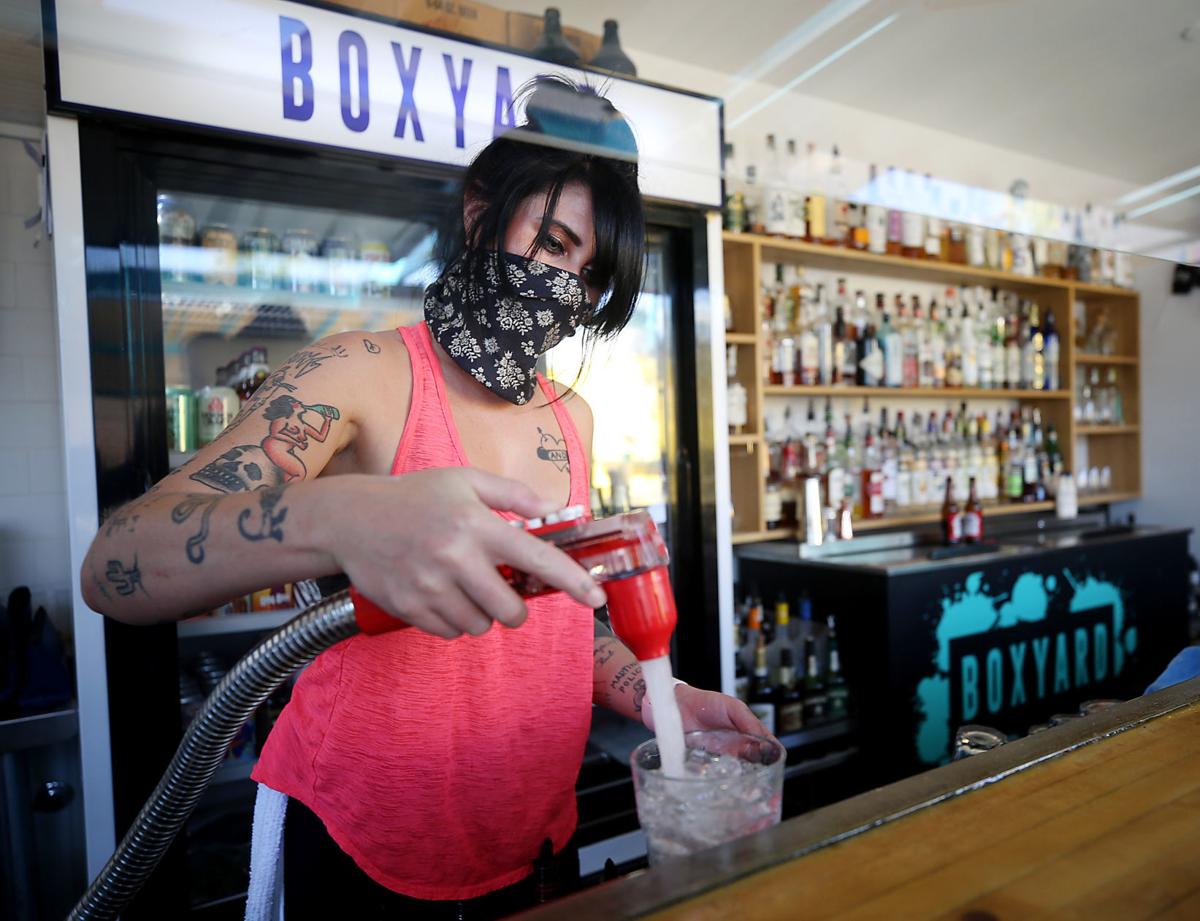 As recently as Friday, Arizona Gov. Doug Ducey was sticking by his decision to permit bars to operate even as Republican counterparts in Texas and Florida shuttered them. 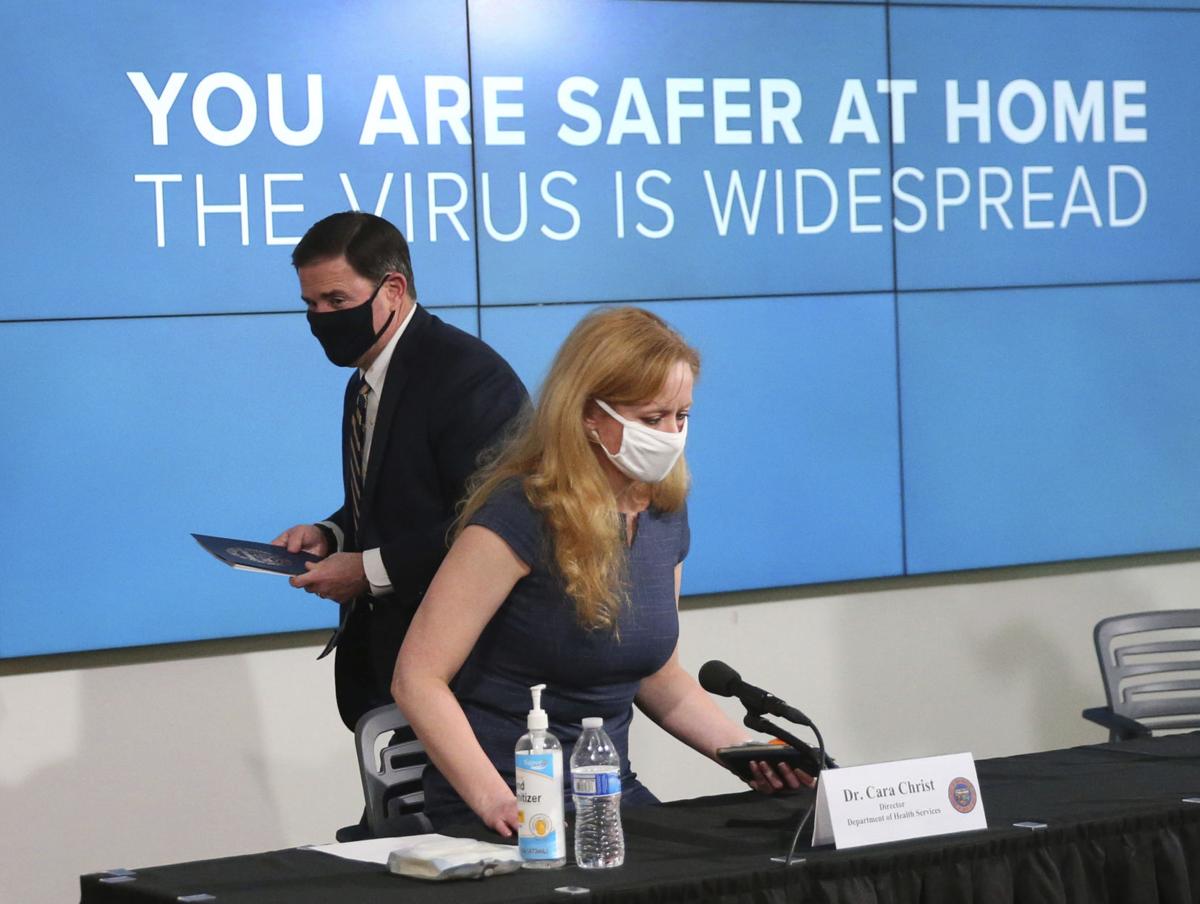 Arizona Gov. Doug Ducey and Dr. Cara Christ leave after providing an update on the COVID-19 situation in the state, Monday, June 29, 2020, in Phoenix. The governor ordered bars, nightclubs and water parks to close again for at least a month starting Monday night — a dramatic about-face as coronavirus cases surge in the Sunbelt.

Conceding he made a mistake in allowing them to reopen, Gov. Doug Ducey on Monday shuttered all bars in the state for at least the next 30 days.

And schools won't open until at least Aug. 17, two weeks later than the planned start date for most districts on traditional calendars.

The moves come as Ducey acknowledged the explosion of cases of COVID-19 that started two weeks after his mid-May order reopening the state economy. That two weeks pretty much coincides with the incubation period of the virus when people are exposed.

"We're fixing it" the governor said when asked if he screwed up in letting bars reopen six weeks ago.

He separately banned gatherings of more than 50 people. Churches and political rallies are exempt.

This could put a damper on any planned Fourth of July celebrations, though he did give individual cities and towns the power to permit larger crowds, including to watch fireworks, if there are assurances there will be proper social distancing.

Public swimming pools, those run by cities or in hotels or motels, will have to restrict groups in or out of the water to no more than 10. For semi-private pools at apartment complexes and condos, owners will need to post notices about the 10-person limit.

But Ducey, who repeatedly hammers home the message that people are "safer at home," refused to reinstate his stay-at-home order. He said it's not necessary.

"The objective today is to slow the spread of this," the governor said. And Ducey said he believes the state can get infection levels back to where they were in the middle of May — when the restrictions were lifted — without an edict.

"I think Arizonans are smart and have common sense and will demonstrate responsibility," he said.

And what if the rate doesn't decline?

"I wake up every day and there is an additional set of problems," the governor responded. "And we solve them in their turn."

Arizona Schools Chief Kathy Hoffman, in a prepared statement said she supports the two-week delay in sending students back to class.

"With COVID cases hitting new highs every week, it is clear it is not yet safe for students and teachers to return to school facilities," she said, noting that some districts with year-round schedules were set to reopen in the next few weeks.

But Hoffman said that schools are free to start distance learning earlier than Aug. 17 or to delay the start of the academic year.

Less clear, however, is how that affects the requirement for schools to be operating for 180 days to get full state funding. And that mandate was reaffirmed just a week ago when Ducey and Hoffman announced that schools needed to be open and operating for that many days if they want their share of $200 million of additional state aid that will be made available.

“It's 14 days extra for us, and that 14 days could make a big difference in terms of supplies arriving,” he said. “Our biggest challenge right now is the supply chain.”

The additional time will also allow for more training for teachers to prepare for online learning and modified in-person instruction.

Pima County Schools Superintendent Dustin Williams says he appreciates the delayed start but that it should be even more flexible. He says schools need to have a 100% remote-learning option where they’ll still get full funding.

“To force schools to put the option of the five-day in-person instruction completely handcuffs them,” he said.

Trujillo is also critical of the requirement to offer 180 days of in-person instruction, which would take action from state lawmakers in a special session to change.

“I think that this crisis requires flexibility,” Trujillo said. “And we're not being given that when we're hammered into the 180 days.”

Ducey’s executive order to delay the reopening of schools calls for an analysis by the end of August on the need to waive the required number of school days.

Trujillo said Tucson Unified is preparing an emergency plan to transition the entire district online if the health crisis necessitates it, although he admits it’s not clear how schools would continue to receive funding if they ceased to offer in-person instruction.

“If we get another shotgun announcement, say the day before school, that we're going to be down for 60 days, we'll be ready to go,” he said.

Ducey closed all bars and restaurants in March following decisions already made by the mayors of Tucson and Flagstaff.

He relented in early May, allowing sit-down dining at restaurants. Even then, however, he said that did not apply to bars.

But his administration changed course, with the Department of Liquor Licenses and Control permitting any bar to open — and serve customers — as long as food was made available. That could include anything from snacks to a food truck parked outside.

The result has been some viral videos of bars packed full of patrons, with few wearing masks or social distancing.

As recently as Friday, June 26, Ducey was sticking by his decision to permit operation of bars even as Republican counterparts in Texas and Florida shuttered them. Instead, Ducey said he would crack down on those "bad actors" who did not follow proper health protocols and work to educate all operators about safe operation.

The governor conceded that didn't work out quite the way he planned, leaving him no option but to close down anything licensed as a bar, meaning any establishment where food sales account for less than 40% of revenues.

"When necessary, when needed, we will do what it take to get the job done," Ducey said.

So why did it take six weeks to figure out that reopening bars was a mistake? The governor said it was all about providing clarity and guidance.

It was only when he saw the spike in infections, Ducey said, "we had to adjust this."

Still, the governor was not willing to say he had any regrets about how he has handled the pandemic.

"No decision has been easy since we declared the emergency on March 11," he said.

"I have made what I believe, in my heart of hearts, is the best possible decision to protect people's lives in Arizona and to protect livelihoods in the state," the governor continued. "That has been the standard."

Those numbers included no new deaths reported and just 625 new cases. But state health officials said that latter figure was because one laboratory had not met the deadline for filing reports.

By contrast, there were 3,858 cases reported the day before.

Chris Minnick, spokesman for the Department of Health Services, said the positive tests will end up on Tuesday's numbers.

As to the deaths, Minnick said that is unrelated to the problem with the laboratories. But he said that figures after weekends often tend to be lower.

It also says that those approaching capacity must cease all surgeries except those that are essential and do not impair the care of other patients.

Today's data doesn't include all of the new cases because a lab partner didn't submit their daily report in time, the state health department said.

Clubs close after citations, push back on Ducey’s call-out of ‘bad actors’

Several Scottsdale bars and restaurants labeled “bad actors” by Gov. Doug Ducey have shut down temporarily, and they’re pushing back on his allegations they disregarded safety protocols meant to curb the spread of COVID-19.

Here's a look at June stories surrounding local coronavirus coverage. This collection will continue to be updated. To see stories from May, cl…

'Arizona's beach' welcomes tourists anew - but not their COVID-19

Puerto Peñasco "is one of the safest spots to visit right now in the region," Mayor Kiko Munro says, "and we intend to keep it that way." Arizona tourists are a threat, but also their economy's great hope.

High winds blew the umbrella into the pool, hitting the pair.

Citing both coronavirus and fire concerns, Marana officials announced they are canceling their Fourth of July festival.

TUSD: Monitors, not teachers, might be in class with students when schools reopen

Many students in the Tucson Unified School District could be supervised by monitors who will be tasked with ensuring pandemic safety guidelines in in a combination teaching plan for online and in-person learning.

The number of confirmed coronavirus cases in Pima County has risen dramatically since schools were closed in March, including cases among children and young adults under 20.

As recently as Friday, Arizona Gov. Doug Ducey was sticking by his decision to permit bars to operate even as Republican counterparts in Texas and Florida shuttered them.

Arizona Gov. Doug Ducey and Dr. Cara Christ leave after providing an update on the COVID-19 situation in the state, Monday, June 29, 2020, in Phoenix. The governor ordered bars, nightclubs and water parks to close again for at least a month starting Monday night — a dramatic about-face as coronavirus cases surge in the Sunbelt.