Dozens of saguaros burned late last week in a lightning-sparked blaze that scorched about 25 acres in the Santa Catalina Mountains.

According to U.S. Forest Service officials, it was the first known fire in the Catalinas primarily fueled by buffelgrass, an invasive plant that has taken hold across the range and throughout Southern Arizona.

“It’s a harbinger of things to come up there, unfortunately,” said Ben Wilder, director of the University of Arizona’s Desert Laboratory on Tumamoc Hill. “We’re facing the complete unhinging of the Sonoran Desert ecosystem.”

Buffelgrass is native to Africa and Asia, where it populates savannas that burn frequently as part of the natural ecological process. The U.S. Soil Conservation Service introduced the grass to the Southwest starting the 1930s for cattle grazing and erosion control because of its high seed production and tolerance to drought.

Now it is considered a noxious weed. According to the Arizona-Sonora Desert Museum, the spread of buffelgrass “rivals climate change and water scarcity as our region’s most pressing environmental issue.”

Buffelgrass grows in dense clumps and spreads even in dry years, crowding out native plants and covering the usually patchy desert floor with an uninterrupted carpet of wildfire fuel.

When an area burns, the flames kill off the saguaros, palo verde trees and other vulnerable native plants, leaving the fire-adapted buffelgrass to survive and thrive.

“Once it burns it comes back even stronger. It wants to be burned,” Wilder said.

The Mercer Fire broke out Thursday night in the Pusch Ridge Wilderness, about half a mile west of where Catalina Highway crosses into the Coronado National Forest.

About 30 firefighters from several agencies battled the blaze with the help of a reconnaissance airplane.

The blaze was completely contained by about 4:30 p.m. Sunday.

Desert Museum imaging scientist Aaryn Olsson visited the burned area Tuesday to survey the damage with two other researchers. He was struck by how quickly it all happened and what conditions were like when it did.

“The desert doesn’t burn, and it certainly doesn’t burn at 75 percent humidity,” said Olsson, whose doctoral work focused on buffelgrass. “It’s the first of many of the events that we predicted, and it was over in a flash.”

Wilder hopes the fire will serve as a call to action.

“We can do something about this grass,” he said.

Both the Desert Museum and Saguaro National Park have aggressive treatment programs for buffelgrass, and Schewel said the Forest Service has been pulling out the plants or spraying them with herbicide in parts of the Catalinas for more than a decade.

Meanwhile, the lab on Tumamoc Hill is locked in its own battle with the botanical invader.

A survey of the hill in the late 1980s turned up just a few dozen of the plants, Wilder said, but by the late 1990s it covered about 100 continuous acres on Tumamoc.

Since then, the infestation has grown to more than 190 acres, though a campaign to pull or spray the plants appears to be working.

Wilder isn’t wild about spraying more glyphosate — the active ingredient in Roundup — into the environment, but he doesn’t see any other choice.

“We have to decide if we want burning slopes of saguaro or do we want to manage this problem,” he said. “We’ve seen what happens when we just let it go. ... The cost of not doing anything is very predictable.”

Asked how much funding is needed to make a serious dent in the local buffelgrass problem, Wilder said $15 million would be “a game-changer.”

With that kind of money, he said, he could treat “20 Tumamoc Hills.”

The Arizona-Sonora Desert Museum has a page dedicated to buffelgrass and tips for removing it on its website at www.desertmuseum.org/buffelgrass

"This is going to be one of the most challenging seasons we're going to have," official warns. 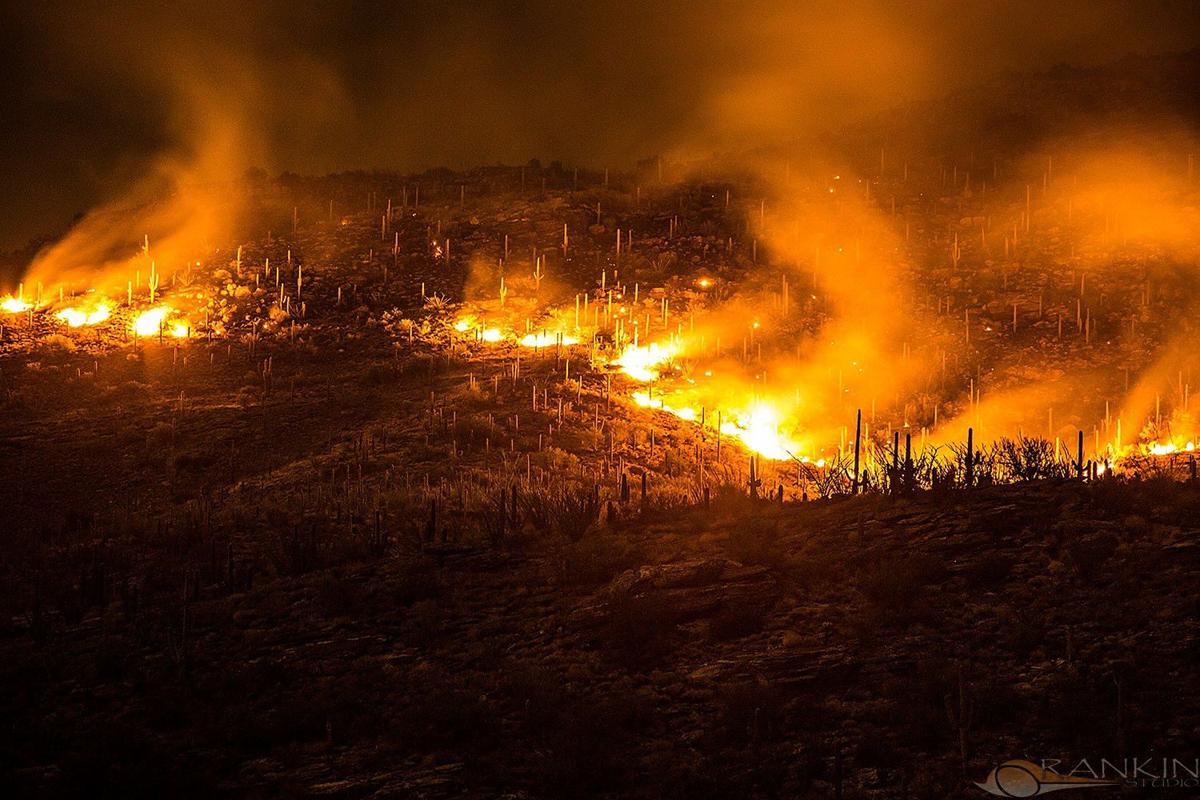 The Mercer Fire scorches saguaros in the Santa Catalina Mountains. The lightning-sparked blaze was the first known wildfire in the Catalinas to be primarily fueled by buffelgrass. 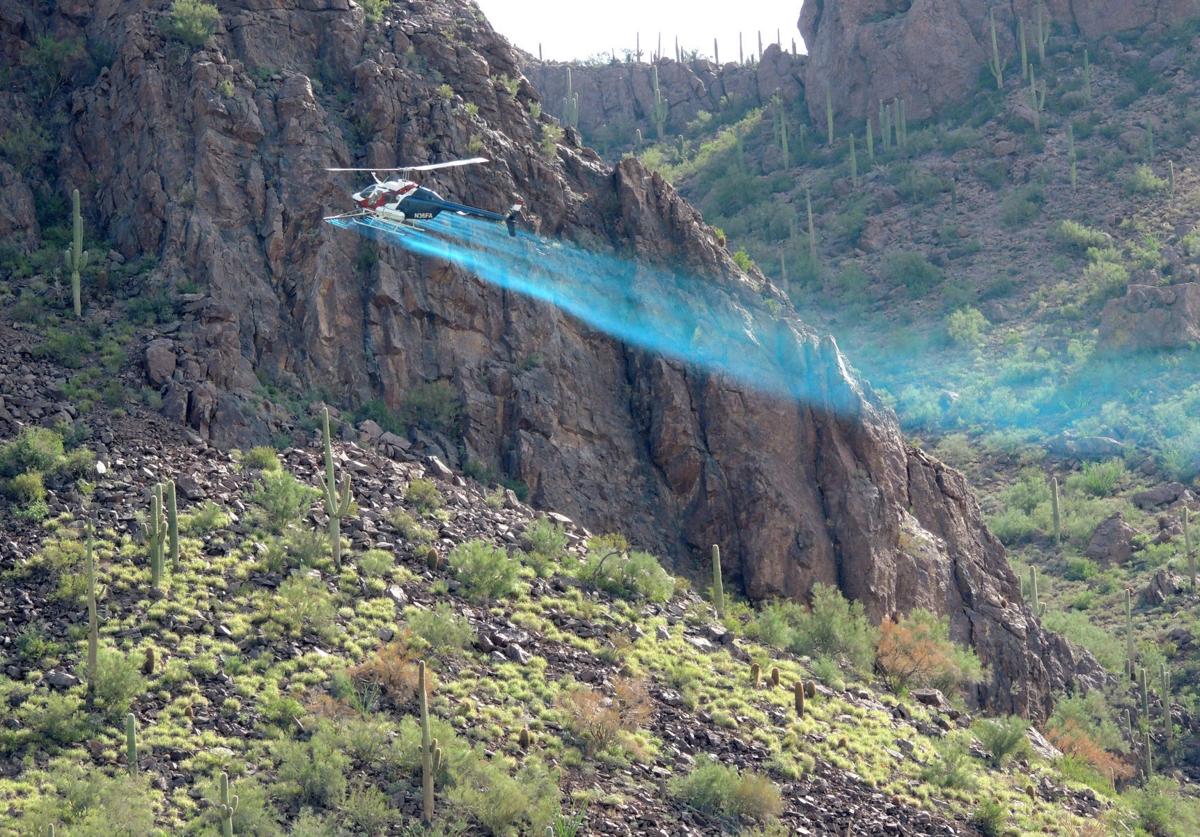 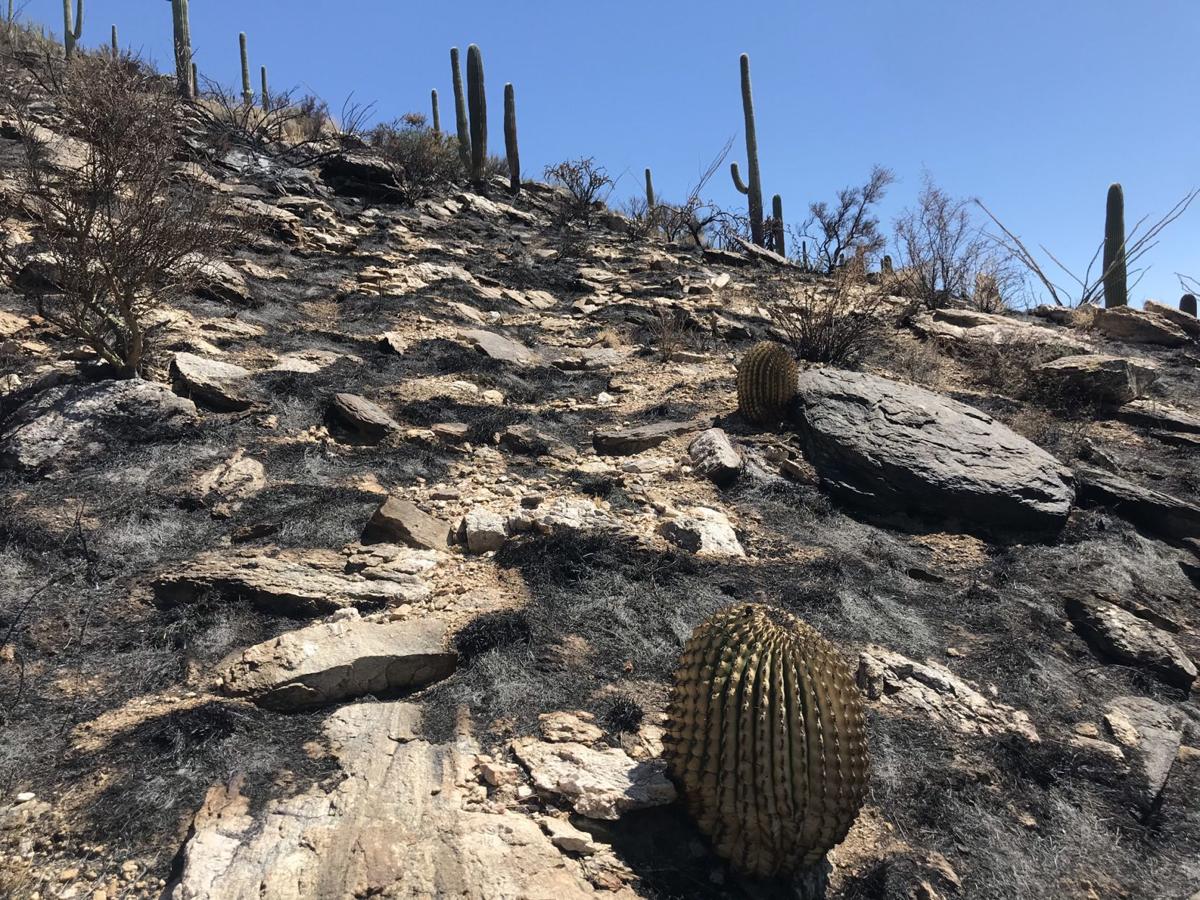 Scorched buffelgrass and burned cactus cover the slope of the Santa Catalina Mountains above Tucson Tuesday at the site of a lightning-sparked wildfire from late last week.