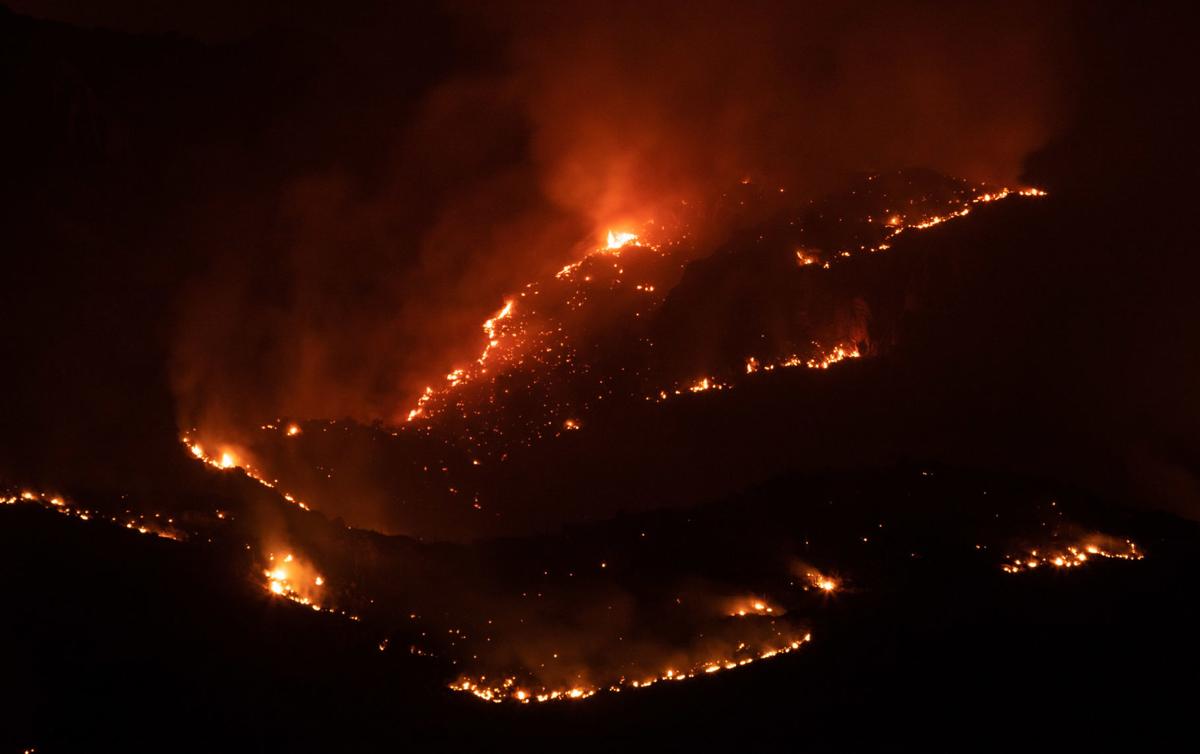 The Bighorn Fire burned through the rocky, steep Pusch Ridge area before moving into Pima Canyon, Finger Rock Canyon and Pontatoc Canyon on the front range. 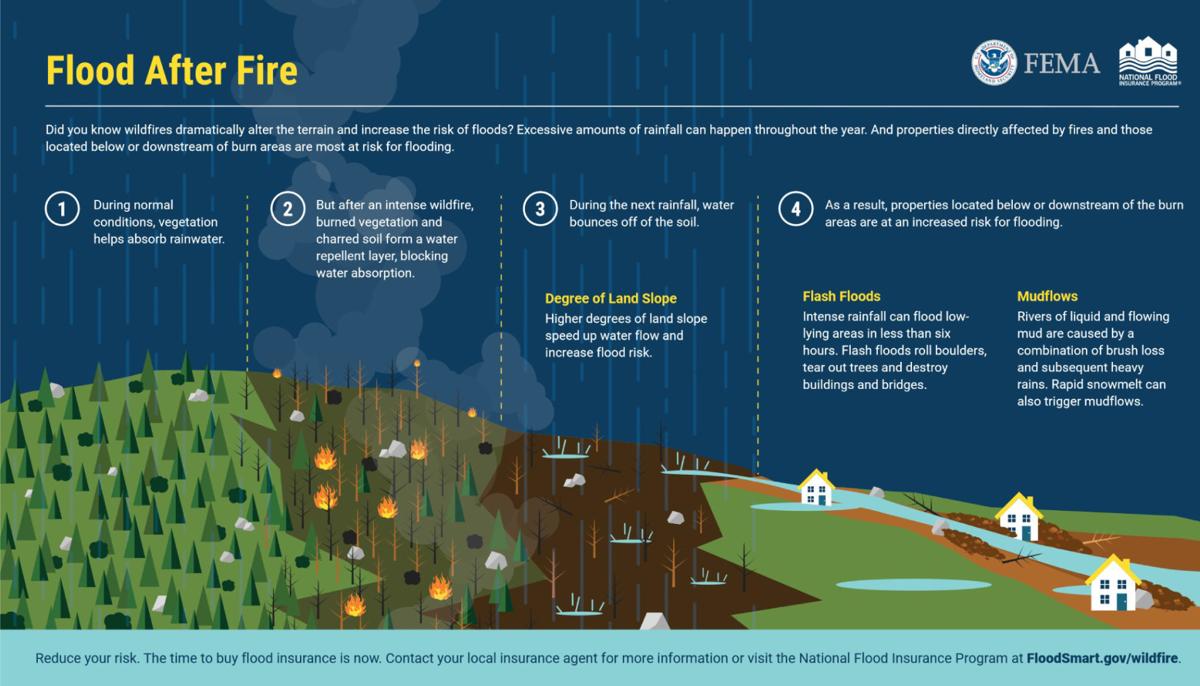 Wildfires often damage landscape in ways that greatly increase the risk for debris flows, which is when rainwater mixes with dirt, rocks, cactus — and even boulders and small trees.

As a research scientist with the Arizona Geological Survey, Ann Youberg pays close attention to both wildfires and what could come next.

That afterward part recently prompted Youberg to ask a friend living near Finger Rock Canyon if she has flood insurance.

It’s something all property owners near the Bighorn Fire‘s burn areas should check into, according to both Youberg and Eric Shepp, deputy director and floodplain administrator with the Pima County Regional Flood Control District.

Here’s why: Wildfires often damage the landscape in ways that greatly increase the risk for debris flows, which is when rainwater mixes with dirt, rocks, cactus — and even boulders and trees.

“The increased flooding is partly due to loss of vegetation in the burn area, and change in the behavior of the soil to resist infiltration,” Shepp said. “These two cause more water to run off during a rainstorm, which creates faster flows with more volume.”

The Bighorn Fire, which was started by lightning on June 5, had grown to 14,675 acres as of Monday and is now about 22% contained.

The wildfire burned through the rocky, steep Pusch Ridge area before moving into Pima Canyon, Finger Rock Canyon and Pontatoc Canyon on the front range, which forced evacuations of homes near the Coronado National Forest boundary.

The fire has also burned into Catalina State Park in Oro Valley and forced evacuations south of the town of Catalina. There is now a pre-evacuation alert issued for Summerhaven, Mount Lemmon and Mount Bigelow.

Youberg said when rain eventually falls on fire-damaged areas such as these, there’s often no longer enough vegetation and plant canopies to break the rain’s impact. There’s also less dead plant material on the ground’s surface to soak up water.

“What happens after a fire is the soils have been altered and so water can’t infiltrate like it did before the fire,” she said. “Fire also changes soil so that it is more easily eroded. More and faster runoff with more erodible soils can often lead to a debris flow.”

Another factor: Summer rains that follow a wildfire can frequently be very intense, Shepp said, with rain falling at a rate of an inch an hour or more. Add in the other factors, including steep slopes, and the results can be disastrous for nearby homeowners.

“We know that wildfires change watershed characteristics that result in the potential for increased flood risk for those who live and work downstream,” Shepp said.

Sometimes the changes are dramatic.

“Our own observations from the Aspen Fire, along the Canada Del Oro Wash, shows that even typical monsoon downbursts can cause significant flooding, with peaks of 7,000 cubic feet per second of water, ash, mud and vegetative debris,” he said.

Over the last 20 years, several people in Arizona have died in this type of flooding, including Oracle resident Jim Huntington, whose house along Bonita Canyon was destroyed by a terrifying debris flow following the Aspen Fire in 2003.

The East Valley Tribune in 2005 reported that the fire had ravaged Tonto National Forest north of Cave Creek before an 8-foot wall of water swept away trees, a car and 7-year-old Marissa Reyes.

Loss of property is far more typical than these tragedies, however.

In fact, floods are the most common and costly natural disaster, according to the Federal Emergency Management Agency. And mud and rocks that get carried along can increase the size of a flood, and the likelihood it will to do severe damage, by upward of 50%.

What’s next? Shepp said Pima County will assess burn areas in order to update floodplain models that will help them look at how the watercourses and the flood risk have been affected in both Pima Canyon and Finger Rock Canyon. Other watersheds may be added, he said, depending on how the fire expands.

“Adding rain gauges in the burn areas’ upper watershed to measure rainfall and to help alert property owners and first responders if a flood threat is imminent is another task we would like to complete before monsoon,” he said.

A Burn Area Emergency Response Team will look at burn severity and the effects of fire intensity on the land, Youberg said. It’s one of the ways they determine the likelihood of debris flows.

“We just have to wait and see what the burn severity is before we know what the likelihood of postfire debris flows might be” she said. “We’ll have to be patient until the assessments are done, and then listen to what the results tell us.”

In general, new  flood insurance policies become effective after a 30-day waiting period but the Biggert-Waters Flood Insurance Reform Act of 2012 provides an exception if the flooding is caused by post-wildfire conditions, and the flooding originated on federal land.

"Crews are watching out for erratic winds, as dry thunderstorms are possible over the Santa Catalina Mountains," the Forest Service said.

On eve of tragic anniversary, Summerhaven residents ordered to evacuate as fire nears

Seventeen years ago this week the Aspen Fire devastated the mountaintop community.

Stubborn fire in Catalina Mountains north of Tucson has cost $10 million to fight so far.

Variety of crews, tools and aircraft being used to fight Bighorn Fire

Heavy use of aircraft has put the firefighting tab at $10 million for the fire in the Catalina Mountains north of Tucson.

Crews were able to keep fast moving fire out of the village of Summerhaven on Mount Lemmon.

The Bighorn Fire burned through the rocky, steep Pusch Ridge area before moving into Pima Canyon, Finger Rock Canyon and Pontatoc Canyon on the front range.

Wildfires often damage landscape in ways that greatly increase the risk for debris flows, which is when rainwater mixes with dirt, rocks, cactus — and even boulders and small trees.