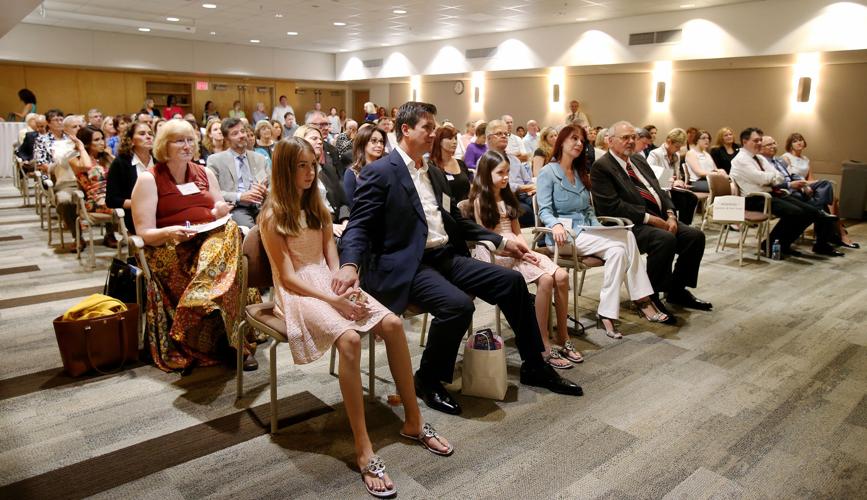 Patients and their families were among the crowd of more than 100 at a ceremony to celebrate a new pediatric center to research neuropsychiatric disorders at Banner-University Medical Center Tucson on Tuesday. 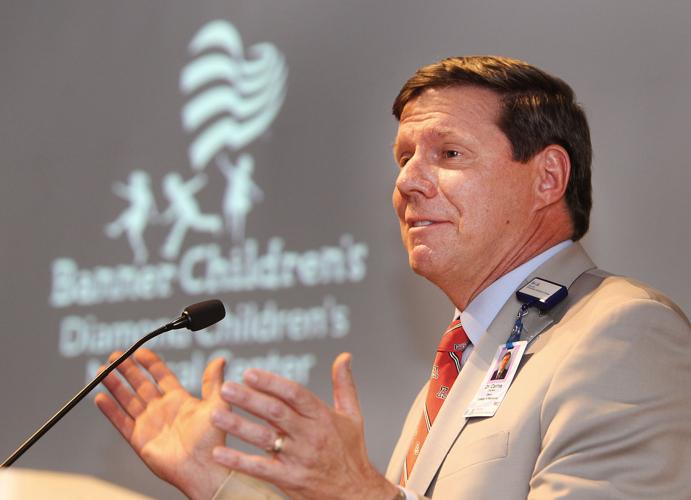 Dr. Charles Cairns, dean of the UA College of Medicine, speaks at the opening of a pediatric research center.

It is, many parents of sufferers say, like someone has turned off a light switch in their child.

To make matters worse, doctors don’t always recognize the problem is not a result of mental illness. Rather, it is an autoimmune disorder where the body’s immune system attacks the brain following an infection like strep.

The standing-room-only event of more than 100 people included parents of children who have suffered from a spectrum of autoimmune encephalopathies, and often struggled to find a diagnosis and treatment.

Many of them had heartbreaking stories of being told their children had sudden-onset mental illness — a diagnosis that did not turn out to be true.

“This is a day for parents who have had to go through being constantly misunderstood,” said Pam Tysick, who drove to Tucson from Mesa for the opening.

While PANS and PANDAS usually hit children before puberty, Tysick’s son began showing symptoms when he was 14. Like with other kids, the symptoms came out of the blue.

Tyler suddenly became claustrophobic, struggled academically and began to uncharacteristically rage and run away from home. He ended up locked up in the juvenile justice system, Pam said. But the problem was not behavioral — it was his body’s reaction to a prior infection, she learned.

Pam cried during the opening of the Tucson center and though she took a plate of food offered as part of the festivities she ended up putting it down. She was too overcome with emotion to eat, she said.

“It’s been so hard to get to this point,” said Karen Twibell, whose son Rex developed PANDAS at the age of 4.

His first symptoms were facial tics. One doctor told Karen it was Tourette syndrome, but, “my stomach said no,” Twibell said. She persisted until she got the right diagnosis and her family is now active with education and advocacy for research about PANS and related disorders through the Scottsdale-based PACE Foundation.

The new local center is a collaboration between the UA Steele Children’s Research Center and Banner Children’s at Diamond Children’s Medical Center. Officials said they could not give an estimate of the cost to create it.

The center has seen 25 patients since May and expects to eventually treat 30 patients per month, said Dr. Sydney Rice, who is chief of developmental and behavioral pediatrics at the UA.

The aim is to bring clinical care, teaching, and research together to treat children with these disorders that historically have been misdiagnosed or undiagnosed.

Clinical services will be provided at Banner-Diamond Children’s and research will be conducted at the UA Steele Center.

Children’s postinfectious autoimmune encephalopathies, like other autoimmune disorders, are on the rise in children in the Western world, which is why it’s such an important area for research, said Dr. Fayez K. Ghishan, who is the physician-in-chief at Banner-Diamond Children’s.

The diseases occur when a child’s body, while fighting off a virus or infection, mistakenly targets or disrupts a part of the child’s own body. The illness causes a child’s immune system to attack the brain, causing a range of neuropsychiatric symptoms.

Treatments can include antibiotics, immunosuppressants, and for serious cases, infusions called IVIG, which stands for intravenous immunoglobulin. Parents of children with the disorders describe how receiving one treatment of IVIG is like “turning the light back on.”

The diagnosis has been controversial in the past among some physicians who don’t believe an autoimmune reaction could cause symptoms like obsessive compulsive disorder and behavior problems.

Still, parents must often visit multiple doctors before they find one who knows about the disorders.

“It has been a long journey to get here,” said Swedo, who was in Tucson for the center’s opening. “Arizona deserves to be incredibly proud. There was a very clear vision and willingness to make it happen. It is the first fully implemented and established center of its kind.”

Swedo also recognized the Arizona Department of Health Services and its director, Dr. Cara Christ, for recognizing the conditions on its website. The department has a designated page for PANS/PANDAS.

“My hope and prediction is that the center will close in the next five to 10 years because you won’t have any business. We will have solved this problem,” Swedo told Tuesday’s gathering.

There's a doctor at the door: Big expansion in home visits possible

Regents to hire outside expert to assess Arizona medical schools

Spending and ethics among concerns raised.

Board of Regents president, without elaborating, has mentioned accusations of misuse of public funds and alteration of public records.

HPV-caused throat cancer on the rise

Men more likely to be affected.

UnSilencing Anatomies: A Tucson program that joins medicine with art

Patients and their families were among the crowd of more than 100 at a ceremony to celebrate a new pediatric center to research neuropsychiatric disorders at Banner-University Medical Center Tucson on Tuesday.

Dr. Charles Cairns, dean of the UA College of Medicine, speaks at the opening of a pediatric research center.