Not even a bug can cross the U.S.-Mexico border through Gov. Doug Ducey’s barrier on protected public land — the only animals that can cross now are humans who can manage to climb over the crates, conservationists say.

“Ducey’s junky parody of the Berlin Wall would be laughable if it weren’t so damned detrimental to wildlife,” said Russ McSpadden, southwest conservation advocate with the Center for Biological Diversity.

Arizona continues to build the border barrier on federal land without following regulations, federal or otherwise.

When asked if the state went through any sort of permitting process or was following any environmental regulations, Ducey’s spokesman C.J. Karamargin simply said “no.”

“Gov. Ducey has no intention of stopping or slowing the mission to fill gaps in the border barrier,” he said.

The state began installing what is expected to be about 3,000 shipping containers on the U.S.-Mexico border in Coronado National Forest in October, with an estimated cost of about $95 million, despite a standoff with the U.S. government over Arizona installing border barriers on federal land without permission. The Republican governor has gone to court to challenge the federal government’s jurisdiction over part of the land.

As of Nov. 20, emergency management contractor AshBritt had installed more than 300 rows of double stacked shipping crates, more than two miles long, for the state.

The state’s goal is to fill the gaps that were left behind when President Joe Biden called for a stop to border wall construction, Karamargin says.

“The state’s goal from the beginning was to make it more difficult to enter the United States illegally,” he said. And according to Yuma Mayor Douglas Nicholls, lawmakers from Yuma, and Yuma County Sheriff Leon Wilmot, “it is achieving that goal. Our expectation is that it’ll have the same effect in Cochise County.”

The number of migrant encounters in Yuma increased by about 5% to nearly 25,500 the month after Ducey placed the shipping crates and remained steady in October.

Despite the number of undocumented migrants coming into the country in Yuma increasing, local and federal government officials in the area have said having a barrier gives them more order in processing people.

The state previously hired AshBritt to put up 3,800 feet of shipping crates over 11 days in Yuma, including near Morelos Dam, where many undocumented migrants have been crossing into Arizona in the last year.

The bollard-barrier built by the federal government during the Trump administration had four-inch gaps in between the posts. While that stopped connectivity and migration for larger mammals, conservationists say, small animals could still move through it. With Arizona’s new barrier that is not the case.

“We’ve now lost connectivity for insects and reptiles,” McSpadden said. “Snakes and lizards down to the smallest beetle where they shore up those containers can just not pass. Only humans can get over that.”

McSpadden documented border wall construction throughout the Trump administration and says he’s never seen construction like what’s happening in the Coronado in Cochise County, a region he describes as “some of the best grasslands in Arizona” and Madrean oak forest.

“This is just really fast and haphazard,” he said. “They’re not really following any safety protocols. There’s no sprayers out there to keep the dirt down. So they’re just filling the air with particulate matter. It’s just a crazy construction scene. … They have no legal authority to do any of it.”

Contractor AshBritt did not respond to a request for comment on what, if any, protocols they were following.

In a Nov. 22 federal court filing in a standoff between the state and the federal government over the shipping-crate barrier, McSpadden declared that work crews had:

bulldozed and destroyed many oak trees;

built through a number of desert streams;

bulldozed turn-around spots into the forest;

graded and expanded the size of the border wall road;

cleared a staging area they created, leaving behind a large, bare area of soft dust that lifts with every gust of wind;

left trees that had been damaged and destroyed in large piles;

started to create new roads along the border, where the existing road moved away from the border due to contours in the land and complicated geological issues, in an attempt to continue installing shipping containers;

and recently created a new staging area full of heavy machinery, bathroom facilities and shipping containers near the border in the grasslands and forest.

The Coronado is U.S. Forest Service land, and the state has no jurisdiction to build on it. Besides that, there is a 60-foot swath of federal land running along most of Arizona’s border with Mexico called the Roosevelt Reservation, meaning Arizona doesn’t have jurisdiction to build almost anywhere on the border.

President Theodore Roosevelt created the Roosevelt Reservation, which also runs along most of the border in California and New Mexico, in 1907 to keep that land “free from obstruction as a protection against the smuggling of goods between the United States and Mexico.’’

The state’s standoff began when federal officials asked the state to remove the Yuma containers, citing an “unauthorized placement’’ on federal property and on Cocopah Indian Tribe land.

Additionally, Coronado Forest Supervisor Kerwin Dewberry sent a letter to the state saying it needed to obtain prior approval through the federal regulatory approval process that governs national forest land before placing any barriers in the Coronado, which the state did not do.

In response to the government’s request, the state filed a lawsuit against federal agencies saying, among other things, that Roosevelt had no legal right to declare all that land along the border was the property of the federal government.

A state complaint in the case also says an increase in undocumented migrants at the border has “put a strain on domestic resources, which is felt most acutely by border communities.” Federal law enforcement at the Arizona border encountered migrants 571,720 times in fiscal year 2022, according to federal data, an 83% increase over last year, though not the record for the state.

While the Yuma Sector had a record number of apprehensions in 2022, Border Patrol in the Tucson Sector and across Arizona’s U.S.-Mexico border as a whole previously had higher apprehension numbers during numerous years, with the highest for the state being more than 725,000 apprehensions in the year 2000.

Besides questioning who has jurisdiction over Arizona’s southern border, Ducey’s other legal argument is that the state has the constitutional authority to protect Arizona’s borders.

The Center for Biological Diversity asked to join the lawsuit as defendants, contending the construction was illegal because Ducey did not do the required environmental assessments.

In response, the state is arguing the center should not be allowed to join because if Ducey wins his argument, then the property where the containers are going up was never federal land in the first place and so no federal environmental laws have been violated.

But at least when it comes to the Coronado, the land beyond the Roosevelt Reservation is U.S. Forest Service land so is still subject to federal regulations. Other environmental protections also still apply that the state isn’t considering, such as those enforced by the Arizona Game and Fish Department.

The Center for Biological Diversity filed a counter argument on Nov. 22 to be included as defendants in the suit, saying Ducey’s lawsuit is politically motivated and makes “extraordinary claims of state control and authority over the federal border lands between Arizona and Mexico.”

Given the rate of construction of the barrier in the Coronado, the state will likely finish before the governorship changes hands to Katie Hobbs, a Democrat who has been critical of the barrier.

“As Governor, my number one priority will be keeping Arizonans safe,” Hobbs said in a statement. “That means real solutions to our border crisis — including boosting funding for our sheriffs and law enforcement, bolstering surveillance, and pressuring our federal government to get us the tools we need. Arizonans don’t need more political stunts — they need results.”

Get the latest in Southern Arizona border and immigration news here

Ducey: Feds have no legal say over shipping-containers border wall

More than 800 migrants are known to have died along the U.S.-Mexico border in fiscal year 2022.

Magnus says his priorities differed from those of his bosses

Feds: More than 500K migrant encounters at Arizona border in 2022

For Star subscribers: Arizona is erecting the shipping-crate barrier along a 10-mile stretch of federal land just west of the Coronado National Memorial despite a federal request that it not do so and take down a similar barrier in Yuma.

For Star subscribers: Arizona's rejection of the U.S. claim of trespassing comes as the Tucson-based Center for Biological Diversity files notice of intent to sue the state over plans to place more border shipping containers.

For Star subscribers: Fatal crashes involving border agents' chases of suspected smugglers have increased, as have questions about whether pursuit policy is turning dangerous situations into deadly ones.

Protests have nearly brought Arizona's placement of shipping containers on the border in Cochise County to a standstill.

US seeks court order to let it remove border containers, then bill Arizona

For Star subscribers: The Biden administration asks judge to let it remove shipping containers Gov. Doug Ducey has had placed along the Arizona-Mexico border, and to bill Arizona for the costs.

For Star subscribers: Arizona is moving leftover shipping containers formerly intended for Gov. Doug Ducey's border barrier from a staging area an hour north of the border to the State Prison Complex in Tucson, apparently for storage. Ducey stopped the construction under pressure. 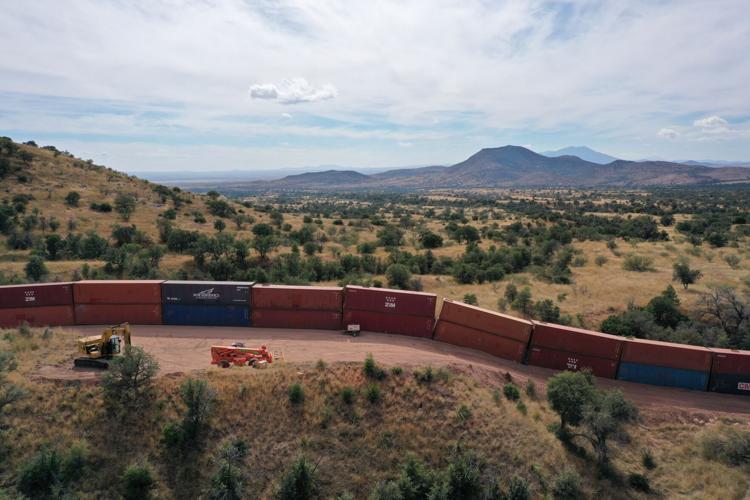 Arizona has placed upwards of two miles of shipping crates in a national forest on the U.S.-Mexico border. It plans to complete another eight miles. 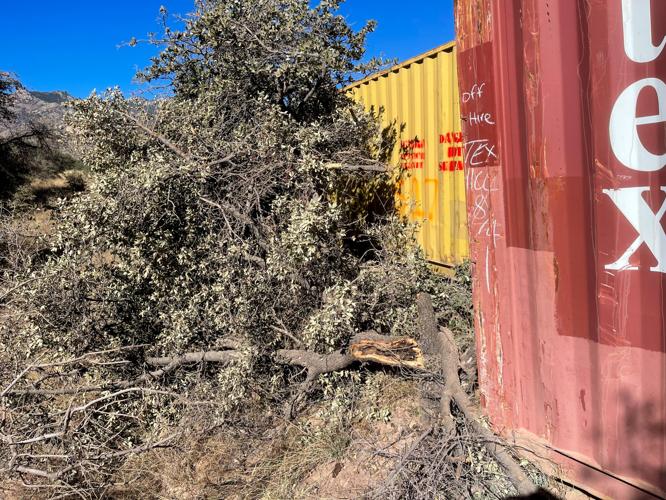 The Center for Biological Diversity says Arizona has destroyed numerous trees as it continues to build a border barrier on federal land with, the Governor’s Office readily acknowledges, no permits and following no regulations.