On a cloudless, don’t-need-a-jacket January morning, Cristy Pulliam passed out litter-grabbers, bright yellow vests and 5-gallon buckets from a pickup truck bed to a group of 14 who were assembling in the Sentinel Peak Park, or “A” Mountain, parking lot on Tucson’s west side.

A few minutes later, Connie Brannock split the group into teams of two or three and sent them to various points along the road that encircles “A” Mountain. For the next hour or so, the group of mostly women, many of whom are in their 60s or older, collected trash strewn around the park.

Many of the group were wearing T-shirts illustrated with a bold red lip print atop a retro garbage can and the group’s name — Trashy Divas. The group is one of approximately 300 groups that have adopted parks, washes, streets and other sites through Tucson Clean & Beautiful, a nonprofit environmental organization founded in 1985.

The Trashy Divas effort is a great way to be outside, connect with old friends, make new friends, and do something for our beloved Tucson, said Amy Weintraub, an author and founder of the LifeForce Yoga Healing Institute.

Brannock and Weintraub, seeking exercise and fresh air during the COVID-19 pandemic shutdown, took early-morning bicycle rides up Sentinel Peak throughout the summer. They found the unexpected: litter — like broken beer bottles, foam cups and small metal cylinders that were once filled with nitrous oxide, or laughing gas.

Frustrated with the litter scattered on the mountain, Brannock contacted Tucson Clean & Beautiful, recruited some action-oriented women, formed Trashy Divas and adopted “A” Mountain for once-a-month cleanups that began in September, she said.

Coincidentally, Adopt-a-Park, the original Tucson Clean & Beautiful program, was first held at “A” Mountain in 1984. There is adoption attrition — groups enter and leave the program through the years, said executive director Katie Gannon.

Tucson Clean & Beautiful gave the Trashy Divas the litter-grabbers (the short poles with a claw-like apparatus at the end of the shaft) that enables picking up trash without too much bending and plucking trash from precarious places like prickly cactus.

It also provided heavy-duty trash bags, gloves and reflective safety vests. In addition, Tucson Clean & Beautiful also reviewed safety protocols and the required releases and safety forms to be signed, and it coordinates the collection of the bags of trash the group gathers.

After about six months, the Trashy Divas will be acknowledged with a sign at the park, Gannon said.

Tucson Clean & Beautiful gives cleanup tips, too. For instance, the big buckets, used for bag-ripping broken glass, is a good tool to use with a partner: One partner picks up the trash with the litter-grabber while the other holds the bucket, said Gannon.

The Trashy Divas name was penned by Brannock, an R&B, neo-soul singer-songwriter who leads the band Little House of Funk. “I liked the ring of Trashy Divas,” she said.

The Divas’ T-shirts were designed by Brannock’s bandmate Mike Polletta. Pulliam, who is retired, recruited her son, Adam Lundquist, co-founder of Southwest Urban Realty & Development, to pay for the shirts.

Eleven to 14 women gather to do the monthly pickup, said Brannock. However, everyone is welcome, she said.

“We actually now have one Trashy Dude,” Brannock noted.

Members of the group were recruited by word of mouth and many live in the immediate “A” Mountain area, in nearby neighborhoods like Menlo Park, and downtown spots like Redondo Tower and Mercado San Agustin.

Adopting a site promotes a feeling of ownership in the community and deepens the relationship with the city parks department, said Gannon. After each cleanup, groups file a report and alert the city to graffiti, broken lights and other things that require attention or repair.

“We have a blast and love being able to make a small difference,” said Brannock.

At the end of the morning’s effort, the Trashy Divas have about 13 bags of trash.

“When you’re done there is a feeling of accomplishment,” said Weintraub.

HOW TO GET INVOLVED

Amid the COVID-19 pandemic, Gannon said litter, including takeout food containers and discarded masks and gloves, are on the uptick. In addition, trash pickup programs for those who are incarcerated have been halted because of the pandemic, resulting in more litter in sight.

Winter visitors, families and neighborhoods can adopt a spot to clean up on a monthly or twice-a-month basis, or hold a single event, said Gannon. Tucson Clean & Beautiful will coordinate the pickup of the collected trash with the city.

A cleanup is a safe way to improve and to be involved with the community, said Gannon. Tucson Clean & Beautiful has safety guidelines that it reviews with potential groups. Cleanups are outdoors and conducive to social distancing and wearing masks.

You can keep a cleanup to your family pod, said Gannon.

“Litter is everyone’s problem and everyone can do something about it,” said Gannon.

For more information about adopting a site, email adoptapark@tucsoncleanandbeautiful.org or call Tucson Clean & Beautiful at 791-3109.

Photos: The Trashy Divas are Cleaning Up "A" Mountain in Tucson

These Tucson women dedicated their lives to causes outside of themselves

Passion for causes well beyond “retirement age” is what marks three Southern Arizona women we lost last year: Lois Martin, Peg Bowden, and J.C. Martin. Two of them were social justice activists; the third, doyenne of local literacy and literature.

Watch Now: The Trashy Divas are Cleaning Up "A" Mountain in Tucson

Connie Brannock bikes up "A" mountain with her wife and friends and got tired of complaining about the trash they would see. She decided to fo…

Rosie on the House: Creating separate spaces for work, study and relaxing

With the COVID-19 pandemic stretching into 2021, many continue to seek out ways to make their homes meet their needs. 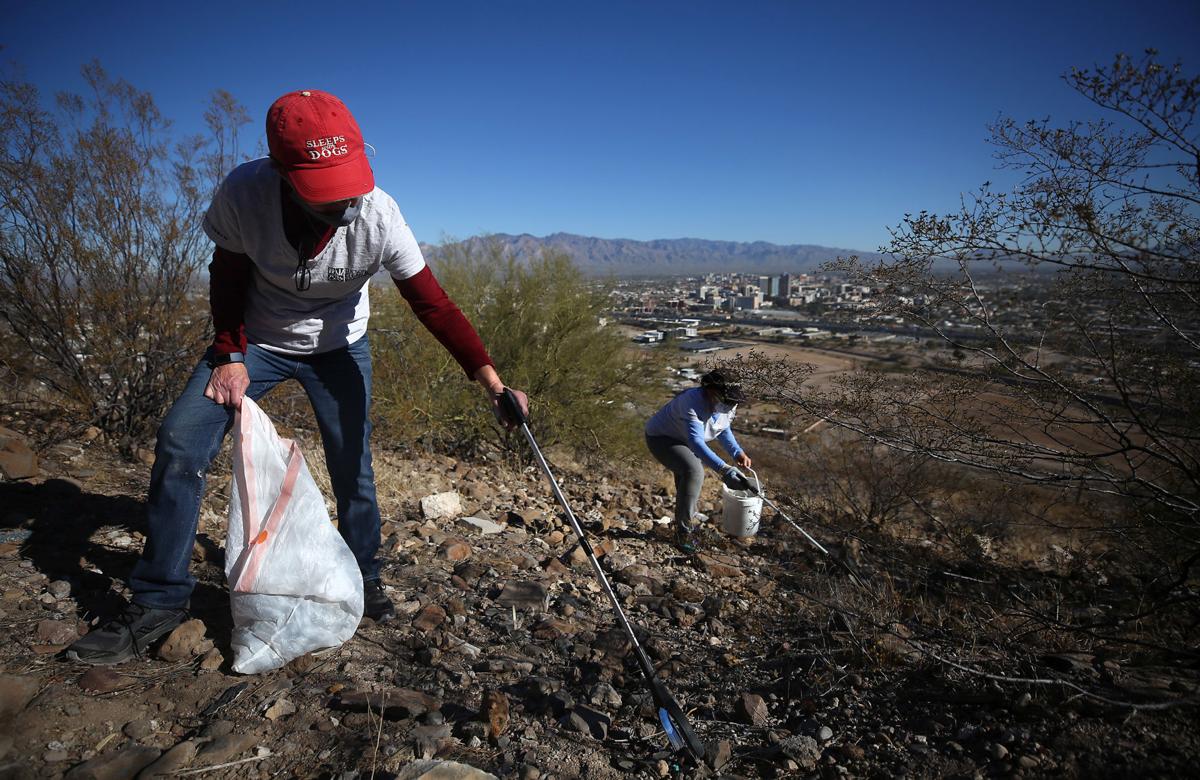 The once-a-month cleanups in Sentinel Peak Park began in September after Connie Brannock and Amy Weintraub noticed all the litter on their early-morning bicycle rides up the mountain. The Trashy Divas get-togethers are a great way to be outside and connect with old friends, says Weintraub. Above, group members C.J. Pulliam, left, and Rose Lady do their part. 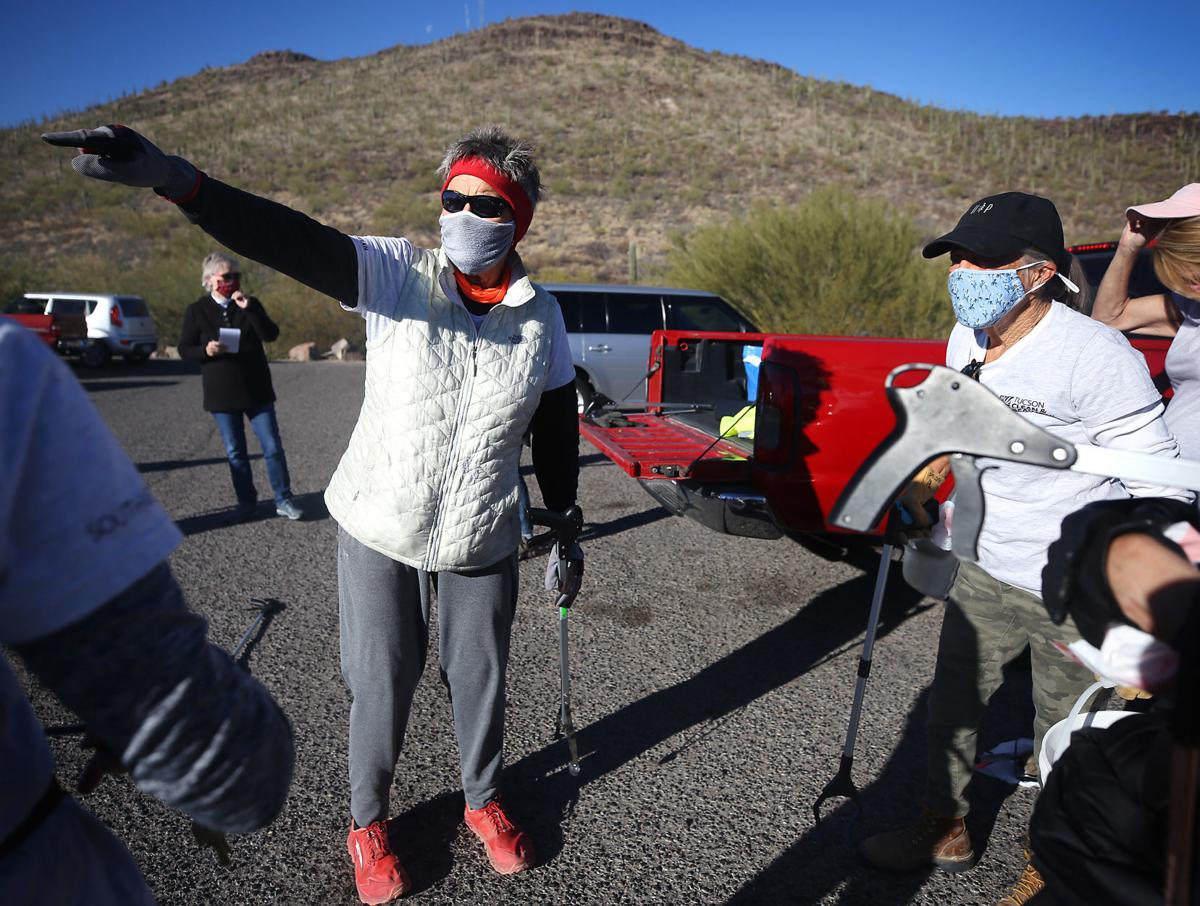 Connie Brannock explains the plan of action to her fellow Trashy Divas. The group adopted “A” Mountain for its monthly cleanups through Tucson Clean & Beautiful, a nonprofit environmental organization founded in 1985. 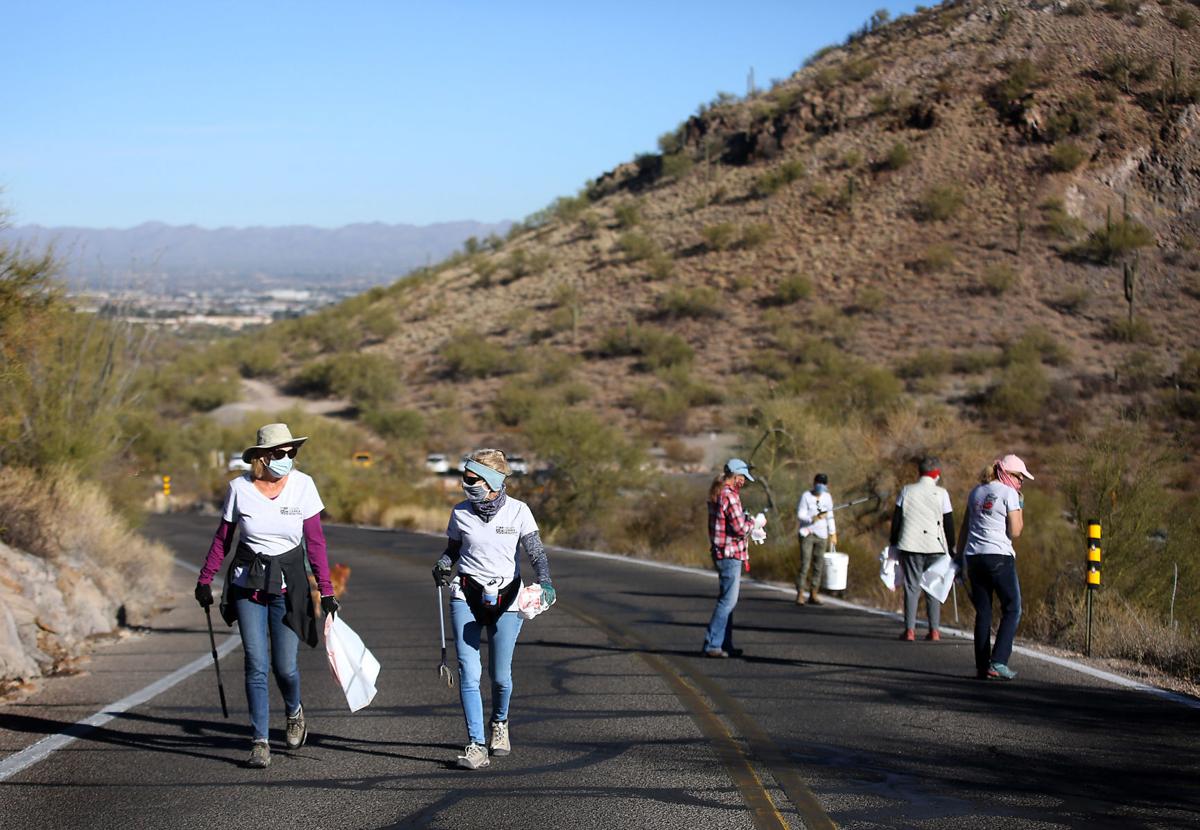 Julie Jones, left, and Amy Weintraub walk up Sentinel Peak Road. Members of the cleanup crew have already noticed a difference: The hill is looking a lot better. “When you’re done there is a feeling of accomplishment,” says Weintraub. 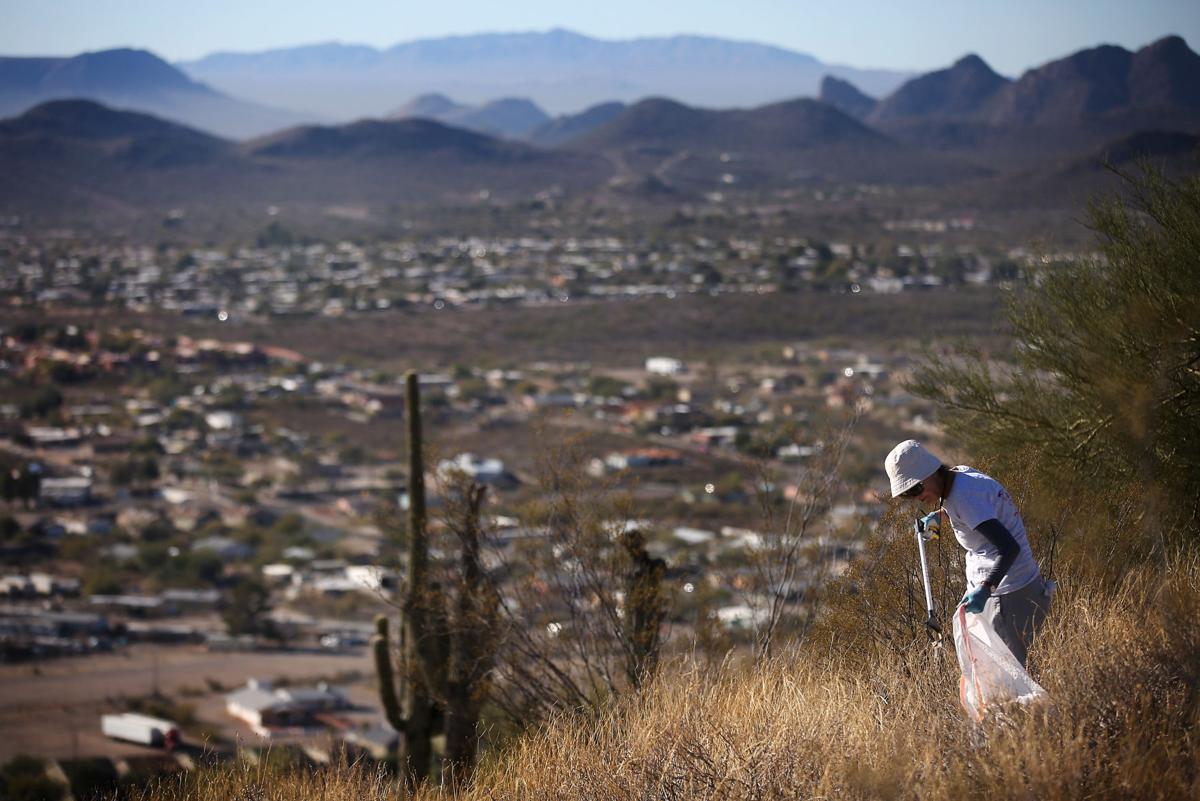 Sandra Kinet, a member of the Trashy Divas, uses a grabber to fill up her garbage bag in Sentinel Peak Park. Members of the group were recruited by word of mouth, and many live in the immediate “A” Mountain area southwest of downtown and in nearby neighborhoods. 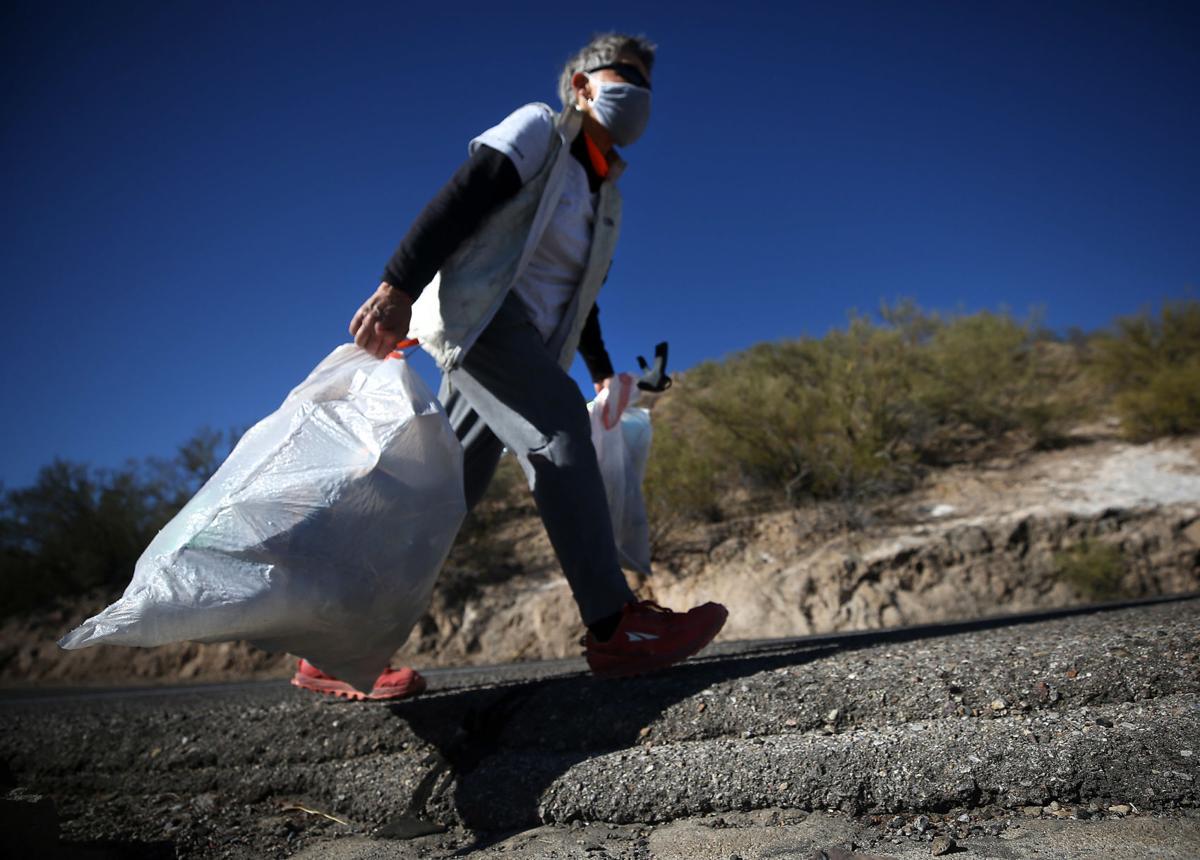 Connie Brannock, founder of the Trashy Divas, carries a garbage bag full of trash along Sentinel Peak Road on Jan. 4, 2021, in Tucson, Ariz. Brannock bikes up “A” mountain with her wife and friends and got tired of complaining about the trash they would see. She decided to form a group, contact Tucson Clean & Beautiful and officially adopted “A” Mountain. Now on the first Monday of each month, the Trashy Divas can be seen filling up garbage bags. The group started in September 2019. 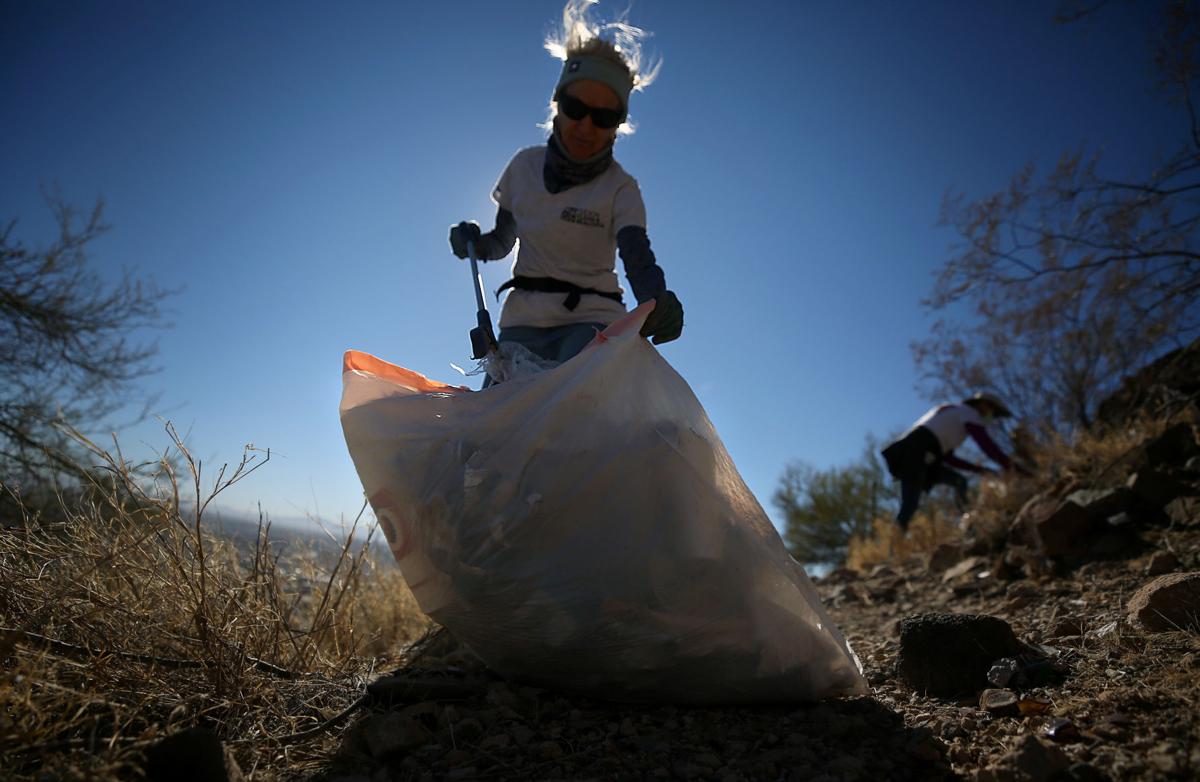 Amy Weintraub, a member of the Trashy Divas, fills up a garbage bag full of trash dumped along Sentinel Peak Road on Jan. 4, 2021, in Tucson, Ariz. The group is a good way to get outside, connect with old friends, make new ones and do something for the community.