A palo verde in full bloom near the base of "A" Mountain stands in front of the downtown skyline, Tucson, Ariz., April 15, 2022. 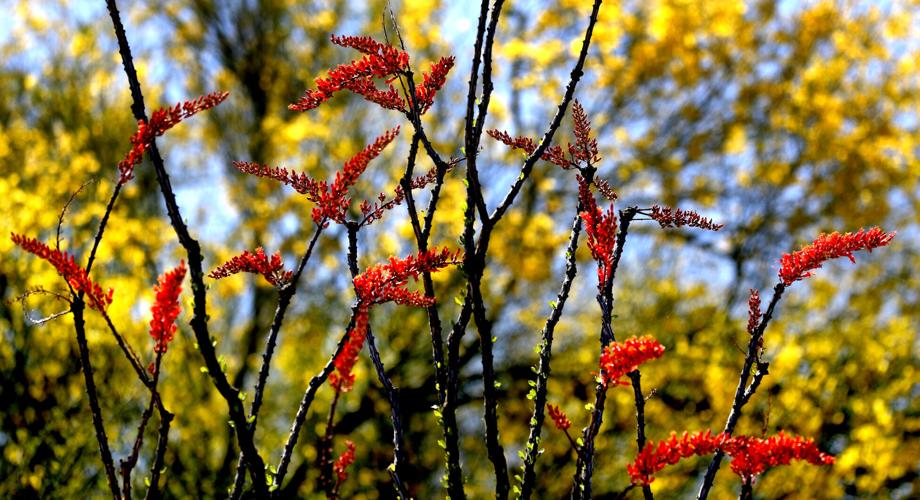 A handful of ocotillo flowers stand out against a background of blooming palo verde on Tanque Verde near Bear Canyon, Tucson, Ariz., April 13, 2022. 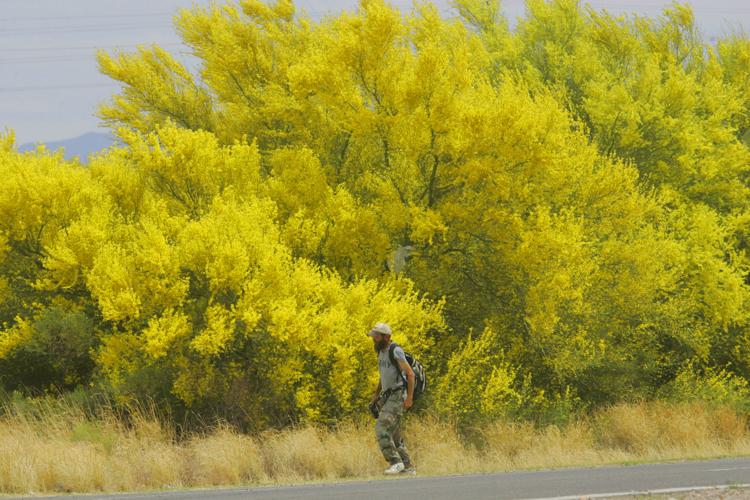 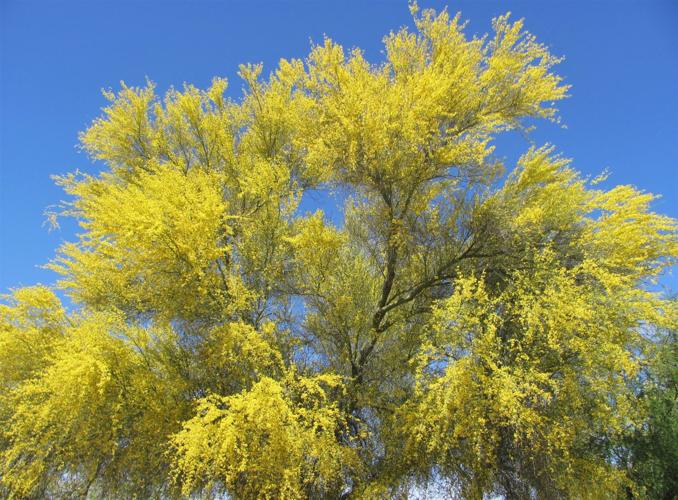 Palo verde trees are easy to identify by their green trunks and branches, and their lush canopies of yellow flowers in the spring.

It's not spring in Tucson without carpets of yellow palo verde flowers. 🌼 Here's what to know about palo verde trees!

The bark of a palo verde tree is green because it's filled with chlorophyll. Unlike most trees, this plant gets a lot of photosynthesizing done through its bark. According to The Arizona Native Plant Society, only about a quarter of the palo verde's food is produced by the leaves.

Designated as Arizona's state tree in 1954, the palo verde joined the ranks of the cactus wren, bola tie and saguaro cactus blossom as a state symbol.

3. There are different types of palo verde

The Foothill Palo Verde (Cercidium microphyllum) can be found mostly on rocky slopes. They have a yellow-green trunk, tiny leaves and pods that constrict around the seeds.

The Blue Palo Verde (Cercidium floridum) can be spotted next to water sources, like washes, and have a blue-green trunk. They grow faster than the Foothill Palo Verde but have a shorter life span.

The Blue Palo Verde typically blooms first, in March and April. The Foothill Palo Verde blooms later, in April and May. The flowers also look a bit different!

According to The Arizona Native Plant Society, when the palo verde became Arizona's state tree, the legislature didn't specify which of the two species made the cut — so both types share the designation!

Yep, it's named after the Arizona-Sonora Desert Museum. According to a Los Angeles Times article, the name was created about 30 years ago when staff members at the museum began to notice thornless palo verde trees that bloomed throughout the summer.

The Foothills Palo Verde usually matures at less than 30 feet.

Palo verde seeds have been used and eaten for hundreds of years, the Desert Museum says, with the Seri eating them fresh, toasted or ground as flour and the Tohono O'odham eating them fresh from the pods.

You can also wait to harvest them until the seed is fully developed and the pod is dry, usually in summer. At this stage, they're best eaten sprouted. Learn more about the harvesting process here.

9. They may not contribute as much as you think to your seasonal allergies

According to this TikTok from Phoenix's Desert Botanical Garden, palo verdes rely on animals like beetles and bees to pollinate them, unlike other plants that rely more on wind. "The main culprits are wind-pollinated plants," they say.

The pollen produced by palo verdes is said to be sticky, making it more difficult (though not impossible) to travel far in the wind. However, the large quantities of dried fallen yellow flowers are known to do some damage when carried through the wind.

This 2017 story from the Arizona Daily Star says other plants, including ragweed, rabbitbush, ash, mulberry and olive trees, are often considered greater problems for allergy sufferers.

According to a Desert Museum fact sheet, the palo verde is the primary nurse plant for baby saguaros.

Cactus blooms in Tucson are showing off this spring, preparing us for the beautiful saguaro blossoms that typically start blooming in mid-May. Here are some of the cactus blooms we've seen this year!

There are more than 30 free plant stands in the Tucson area. Here's where to find them

Last year, Tucson welcomed its first free plant stand. Since then, more than 30 have blossomed in Southern Arizona. Find out where you can pick up and trade free plants, seeds, pots and gardening tools in the Tucson area!

Here are a few things you might want to know about saguaro cactus blooms in Tucson and Southern Arizona. Some spoilers: Peak blooming is now through early June and the flowers smell like melon.