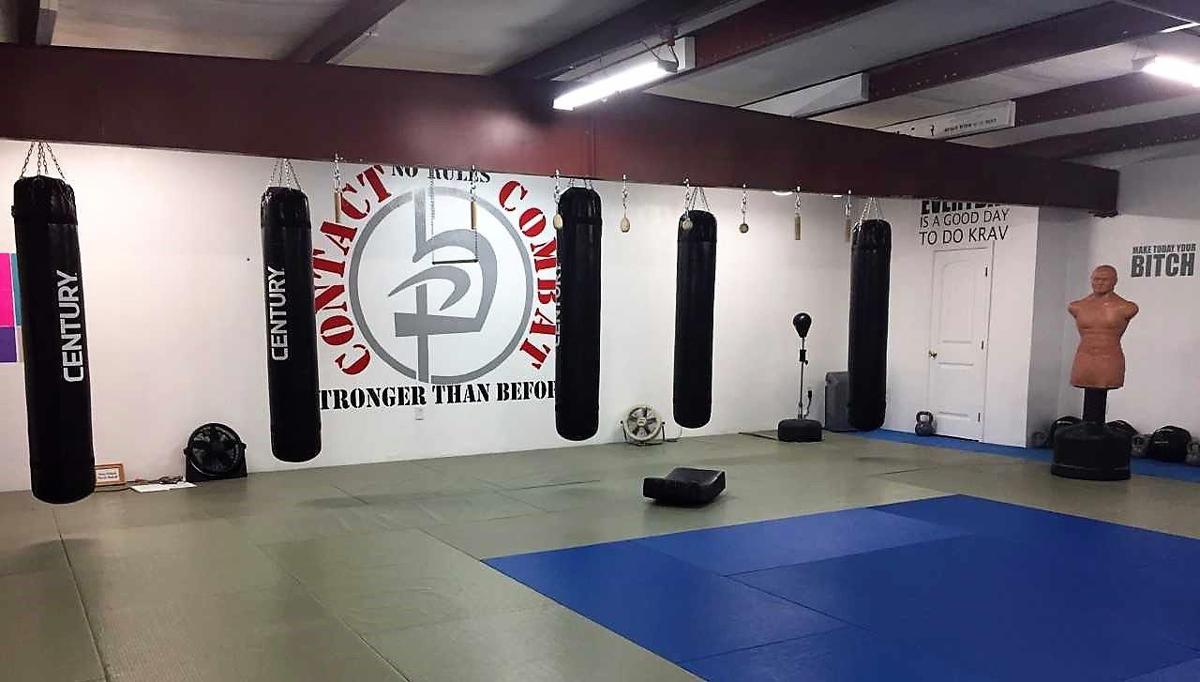 We're pretty sure this studio is made up of several converted storage units. Note Bob in the corner. 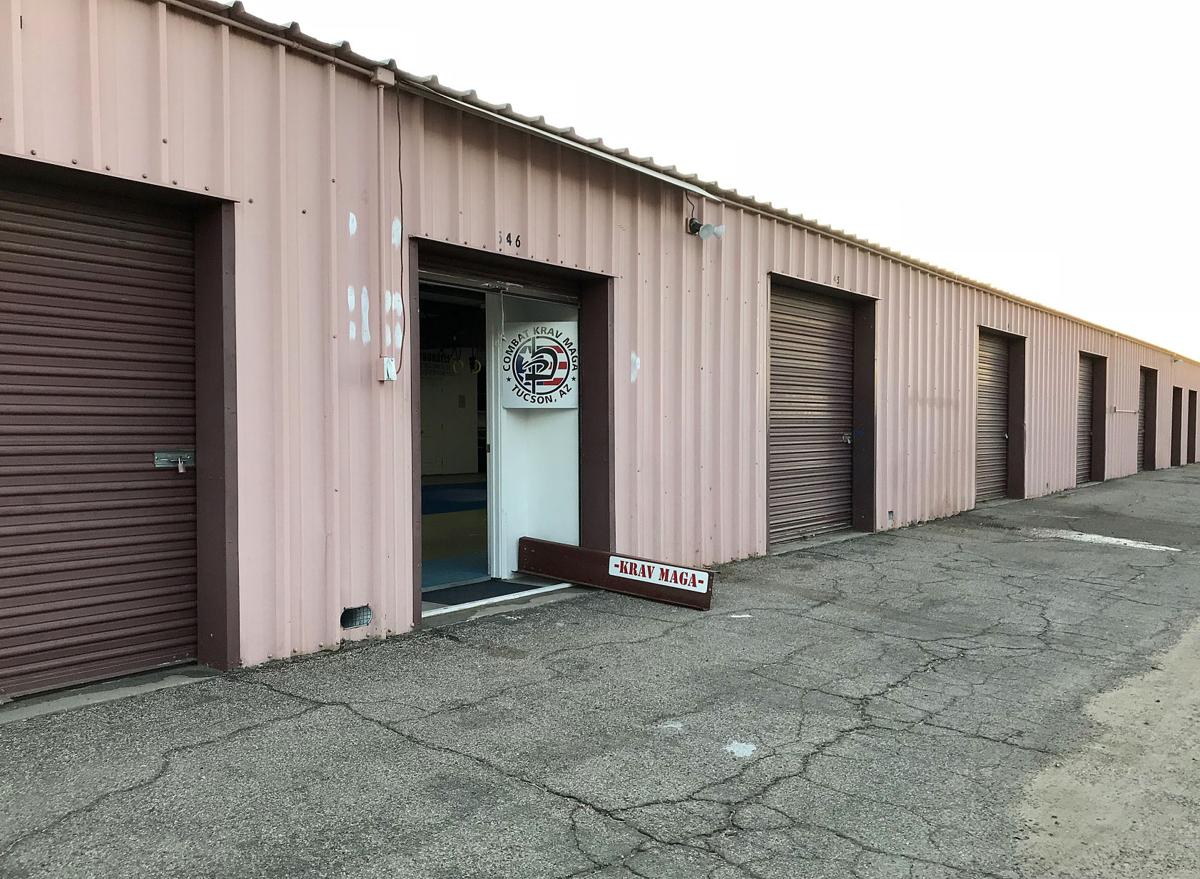 Don't let the looks of this fool you. The studio is legit and awesome. 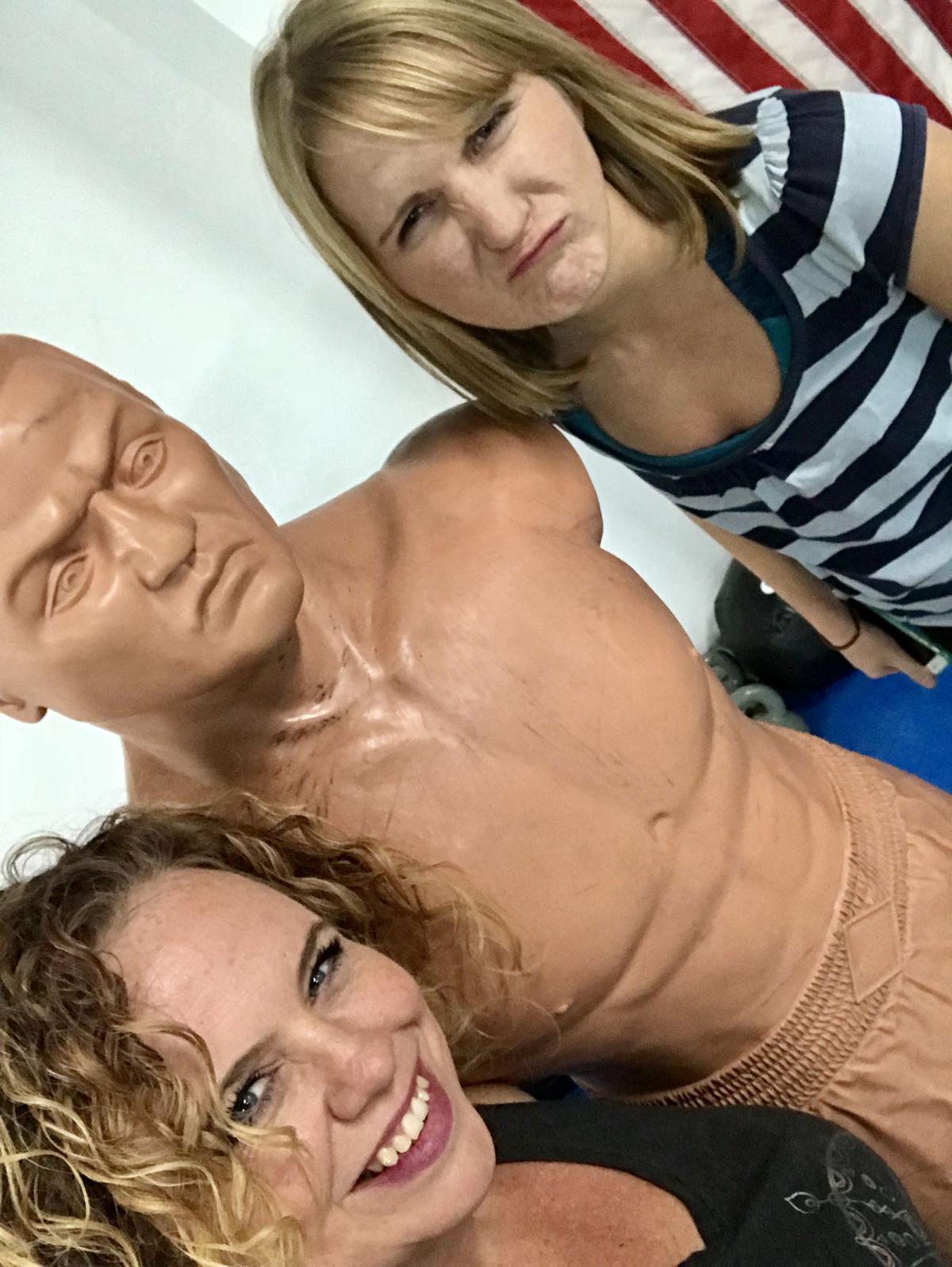 Bob was such a gentleman while we practiced eye gouges and palm heel pushes.

If you're like us, you've seen FB events for self-defense classes and thought, 'wow, I should do that.' And then, you don't.

Well, that changed for us last week when we (Johanna and Angela) decided to try Female Fridays at Combat Krav Maga: Unit 545.

Sure, the idea of learning how to defend yourself against a bad guy sounds kind of intimidating, but it's actually a pretty empowering experience.

We weren't sure what to expect. Would it be scary? Would we feel dumb?

The answers to both of those questions was no.

• Angela is a fairly active mama in her early 40s. She tries to hit the gym at least three times a week (ok, ok, it's usually like once or twice) where she runs on the treadmill, lifts weights and takes classes. She loves the post-workout zen she feels after a good sweat session.

• Johanna is in her late 20s and gets by with 20-minute workouts every morning. Don't be too impressed. She keeps her pajamas on and lunges and crunches to YouTube videos while binge-watching Netflix. Every now and then she goes for a run and remembers she hates running.

Johanna: Pulling up to the studio made us think we were about practice self defense in real life. I was glad Angela was with me. The studio, Combat Krav Maga: Unit 545, is tucked back in a labyrinth of storage units off of Interstate 10 and Prince Road.

A-frame signs with "Krav Maga" printed in bold, black letters point you in the right direction. But don't be startled when you get to the studio, which takes up several storage sheds. It's totally legitimate. The studio's owner Jenna Herder also owns I-10 Self Storage. Punching bags hang from the ceiling, a rock wall spans one side of the gym and mats pad the floors. Bob, a punching dummy, presides over all of it.

Angela: What Johanna said. All of it. Pulling into the complex is a little off-putting. But don't let that stop you.

Once you get inside, it's warm and comfortable. And you can tell it's the kind of place you can get a great workout in.  It's the classic example of not judging a book by its cover.

Bob, the punching dummy is such a good sport.

Johanna: For some background, Krav Maga is a self defense and combat technique originally developed for the Israeli military. So yeah, this is not joke. It's about surviving a fight, so it doesn't have any of the spirituality that accompanies some other martial arts. The class we went to was called Female Fridays. Every Friday, owner Jenna teaches a self defense class specifically for women.

The Friday that we went, we were in class with one other woman, but Jenna told us class sizes vary. We spent an hour learning how to escape from wrist grabs, bear hugs and hair grabs. It wasn't much of a cardio workout, but the information was so valuable. We would learn how to escape from an attacker and then practice on each other and Bob. We did lots of imaginary elbowing, kneeing and eye gouging — and of course we made sound effects.

Pro tip: Leave all jewelry, including any rings, at home. You'll be grabbing each other enough that your jewelry could do some damage (or end up damaged).

Angela: Let me just say, I am a big sissy. The thought of going to a class like this made me a little nervous. But, it was SO GOOD.

Jenna, the owner, is a badass. She's down-to-earth, tough and makes the class fun and not scary, even though the topic is not always pleasant.

I left there feeling like I had a much better chance of escaping if anybody tried to get me.

For some strange reason we all made a squish-hissing sound when doing pretend eye-gouges.

Johanna: Totally. I would love to get more confident with these self defense moves. We also laughed a lot considering we were talking about how to protect ourselves from an attack. I think that had everything to do with Jenna and the safe, girls-only vibe. This is definitely worth checking out.

Angela: Absolutely. It would definitely make me feel more powerful and confident knowing I could defend myself if I had to. I love that it was a girls only thing. It would be super fun to take your squad to before going out on a Friday night.

We tried the new Let's Sweat studio downtown and ... sweated a lot

There's a new fitness studio downtown, offering strength and spin classes, so we (Angela and…

Oh my goodness guys, I think we found the workout jackpot.

We released our inner drummers at a Pound Fitness class

She owns a Krav Maga studio and makes nail polish.

If exercising more and getting or staying fit are on your list of New Year's resolutions, you are not alone.

This was perhaps our most unique workout experience yet.

Satisfy your fitness curiosities at the zoo Saturday

If you've ever wondered what the heck Pound Fitness or PiYo are, check out Fit Fest at the Reid Park Zoo Saturday, March 3.

The Lohse Family YMCA downtown has a new class that — honestly — we were dreading.

We tried a paddleboard yoga class and it was splashtastic

There's nothing quite like doing a happy baby pose and wondering if you're going to roll right off your mat and into the water.