A plan to move and expand Tucson’s first resort into Oro Valley and develop residential, retail and office space is likely to drastically change the serene desert scene along Ina Road.

The annexation takes effect May 21 and is expected to have an immediate fiscal impact of $755,000 a year because of sales taxes, said Mary Jacobs, Oro Valley’s town manager.

Westward Look was built just after Arizona became a state in 1912. Oro Valley was founded in 1974 with 4 square miles and is now a patchwork of 48 annexations with more than 38 square miles.

As part of the Westward Look annexation, the town accepted maintenance of the Ina Road right-of-way as well as the first 1,500 feet of Westward Look Drive — east of Oracle Road.

Three different proposals for development were approved for the east and west side of Westward Look Drive along Ina Road.

On the west side could be boutique retail and restaurant, residential villas or office and retail. All would have building heights of up to 28 feet.

On the east side there might be luxury apartments, hotel and restaurant or office — all with maximum building heights of 40 feet.

Depending on the final development, officials say Oro Valley could see revenues over 20 years of between $16.8 million and $23.8 million.

Neighbor concerns about traffic, noise and privacy were addressed in two public hearings and modifications have been made, said Linda Morales, CEO of The Planning Center, a local consulting firm that represents Westward Look.

She said the open space immediately west of the existing resort will be preserved as well as the walking trails and equestrian trails.

The east-side courtyard would be modeled after St. Philip’s Plaza, on River Road and Campbell Avenue, and the west side would feature similarities to Broadway Village, at Country Club Road and Broadway, Morales said.

No more than 20% of the development would be residential and no senior living facility would be allowed.

The start of any development is at least two years out, said Andrew Stegen, general manger of Westward Look.

Final proposals and architectural plans, whether for residential, hotel or retail, will come back before the town council for final approval, he noted.

Councilman Tim Bohen voted along with the other council members, and Mayor Joe Winfield, to approve the annexation but voted against approving the development plans because there are too many options.

Saying this particular annexation was not well executed, he added “I’m not against annexation as a concept.”

The president and CEO of the Oro Valley Chamber of Commerce, Dave Perry, told the council the chamber supports the annexation and welcomes a resort into the town.

The town, founded in 1974, is working to get a historic designation for a decades-old neighborhood, preserving the area and providing tax breaks.

Micro Safari, by a Tucson entrepreneur, gives an upclose look at 30 soil-dwelling species with a microscope that clips on to a cell phone.

The proposed $2.1 billion budget is the largest in county history, heightened by federal COVID-19 grants and paying down law enforcement pensions.

Westward Look Wyndham Grand Resort and Spa is being annexed into Oro Valley. Future development plans could result in the addition of residential, retail and office space in the desert area around the property along Ina Road. 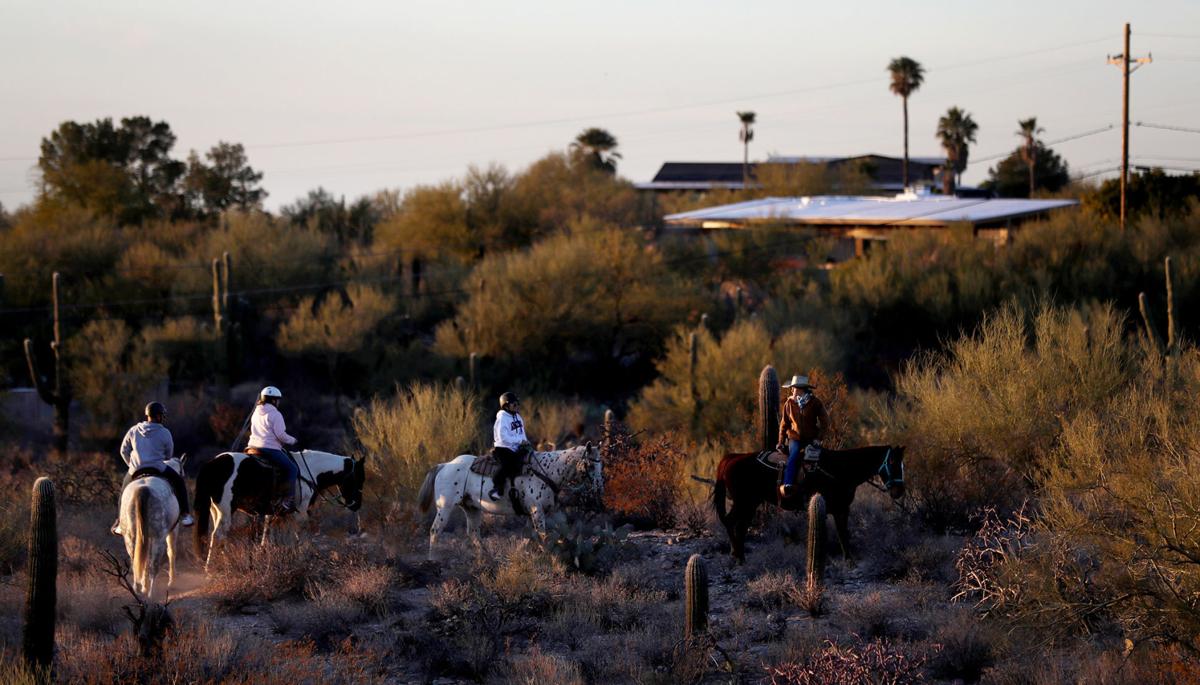 Riders meander along a ridge between two washes on a sunset trail ride in the open land west of Westward Look. Resort officials say walking and equestrian trails will be preserved.