Startup teams and mentors listen to practice business pitches as part of IdeaFunding. 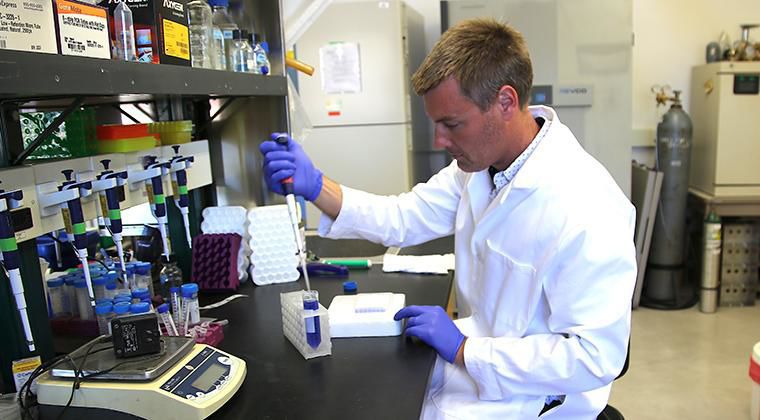 Benjamin Renguist, who founded startup GenetiRate, works in his lab at the UA Agricultural Center. 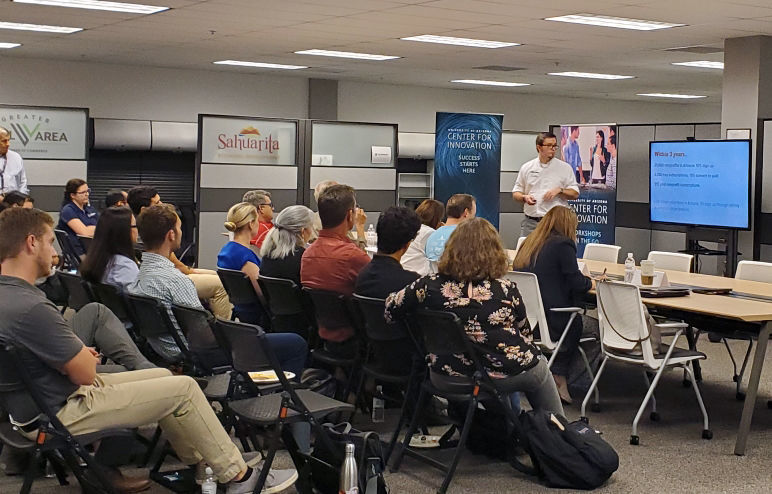 Evan Westman, co-founder of Ceres AgTech, said his team has been able to connect with local mentors, and IdeaFunding’s pitch training helped him present a case for his company. 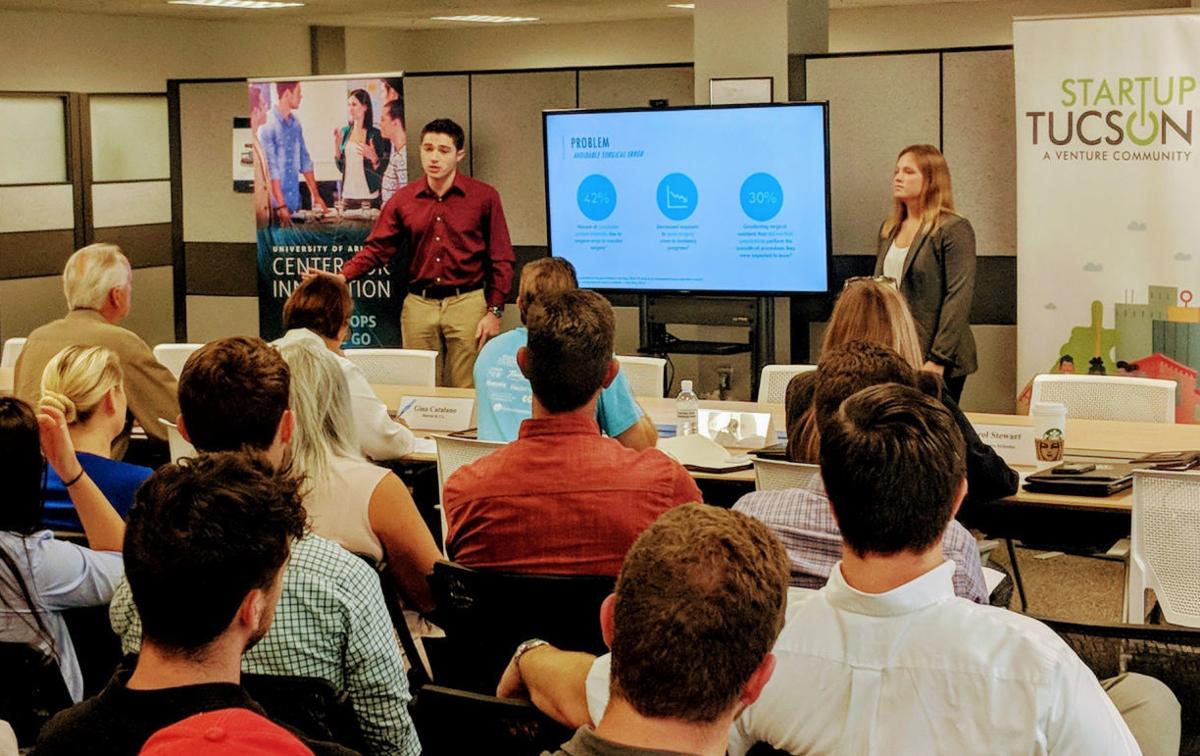 Ben Knapp and Hannah Eherenfeldt, founders of ReSuture, pitch their idea for a vascular surgery training platform at an IdeaFunding practice business-pitch session.

What do a system of aerial drones used to pollinate crops, technology to help fish farmers raise the fastest-growing stock, and special clothing designs to allow women to go braless while maintaining modesty all have in common?

They’re just three of the entrepreneurial ideas that will be pitched to investor panels in mid-October at the latest edition of the annual IdeaFunding pitch competition, a “Shark Tank”-style event that is part of the 10-day-long TenWest Impact Festival.

The IdeaFunding event was started more than 20 years ago and was adopted by the nonprofit entrepreneurship group Startup Tucson in 2014.

The idea has remained essentially the same over the years: Founders of early-stage startups learn how to pitch their ventures to investor panels in a series of events to reach a final pitch-off with the chance to win thousands of dollars to help take their companies to the next level.

The program has longtime ties to the University of Arizona, which has provided program experts and mentors from the UA Center for Innovation and the McGuire Center for Entrepreneurship, and many participating startups were founded by UA students and grads or have other links to the school.

UAVenture Capital, a venture-capital fund set up in 2017 by local business leader Fletcher McCusker and longtime colleague Michael Deitch, is sponsoring a $25,000 prize for IdeaFunding’s winner this year.

Additionally, all qualifying teams can apply to win two special prizes, the Adelante Arizona Prize for women- and minority-owned businesses; and a social-impact prize sponsored by the United Way of Tucson and Southern Arizona.

Program partners of IdeaFunding include the University of Arizona Center for Innovation, the UA’s McGuire Center for Entrepreneurship and the Arizona Commerce Authority.

Organizers have tweaked the format a little this year to boost participation, said Liz Pocock, CEO of Startup Tucson.

“One of the cool things about this year is, it’s expanded beyond just tech, so you’re going to see a lot more diverse companies on the stage this year, which we think is really positive for our ecosystem,” Pocock said, noting that two of the five pitch finalists are consumer product ventures.

Last year, besides five finalists competing on the main-stage event, several teams pitched in side competitions based on several categories, including idea- and growth-stage startups, bioscience companies and startups with product prototypes.

This year, Pocock said, organizers decided to instead have secondary pitch competitions in four specific “industry vertical” groups such as software as a service technology, medical technology, food entrepreneurs, and consumer products.

Four or five teams in each of those categories will compete for a prize package worth up to $5,000 in cash and business services.

The 54 initially qualifying applicants went through a business-pitch training session and practice pitches before the 23 remaining startup teams were picked and went through another pitch process.

The five teams picked as finalists to deliver three-minute pitches for the grand prize are:

Yngve grew up in Tucson and got her undergraduate degree in business management from the UA in 2000, and returned from a stint in property management and nonprofit work with the American Red Cross in the Chicago area in 2012. She ran a local business importing off-road truck parts for four years.

She said she got the idea for braless fashions when visiting Massachusetts on a humid summer day and wishing she could shed her brassiere.

An experienced seamstress, Yngve said she’s initially designed a tee-shirt and a tank top with special panels to give the wearer a measure of anatomical privacy while still affording the comfort of going braless.

Yngve figures winning the $25,000 top prize will help her boost her initial production runs, but win or not, she says the IdeaFunding process has been invaluable since she’s never had the opportunity to pitch a business idea.

“The first pitch I didn’t do so well but the second one, I feel I nailed it,” she said. “I know the judges that are going to be at the actual competition are going to be a little more hardcore, I think they want to hear more concrete stuff and financial data, so I need to put that in my pitch and not have it be so touchy-feely.”

Ceres AgTech CEO and co-founder Evan Westman, who graduated from the UA last May with a bachelor’s degree in electrical and computer engineering and is also a McGuire Center grad, said his team developed the drone-pollination system as a senior-year design project.

The company is looking to patent its system and license the technology from the school with the help of Tech Launch Arizona, he said.

Building on work started by previous UA engineering student teams, Westman and his team have been working with date growers in the Yuma area to replace a costly and inefficient process of manually pollinating date trees.

The company’s system uses semi-autonomous drones to fly to the top of female date palms and shoot pollen onto their blossoms, guided by computer programming and a ground controller.

Westman, who is a software developer, said the UA Center for Innovation and Tech Launch have helped connect the team with local mentors, and IdeaFunding’s pitch training helped him present a compelling case for the company.

“It’s an awesome experience — it’s really good practice to get in a pitch competition setting before a judges panel and they’re grading you on your pitch,” he said. “The really good thing about the Tucson startup community is, there are a lot of people willing to let you bounce ideas off them and try to help you in your process going forward.”

Another IdeaFunding finalist, Janice Marks of Page a Day Math, said IdeaFunding taught her about all the resources available to local entrepreneurs, including the UA Center for Innovation, and helped her focus her development effort on initial core customers.

Marks, who has a background in business-level software and marketing and taught math at a local charter school, founded Page a Day Math after her daughter was struggling with her math courses.

Marks developed a series of books for young children that teaches the basics of “math facts,” or basic arithmetic, to give students the foundation they need.

IdeaFunding, Marks said, has helped her focus on her marketing message and potential customer base.

“When you’re putting together a pitch deck, it just forces to refine what you’re focusing on, your customers, who you’re actually targeting … it’s been fantastic,” she said.

Tickets are on sale for the TenWest Impact Festival, a 10-day series of events Oct. 11-2010 across various Tucson locations.

A centerpiece of the entrepreneurship program is IdeaFunding (Oct. 17), which includes a business-pitch competition with a $25,000 grand prize.

A variety of ticket packages are available, including an all-inclusive passport for $300 and a general ticket for $35 that covers most events besides those with special add-on fees, such as the IdeaFunding pitch contest and luncheon ($35) and other luncheon events.

For more information or to register, go to tenwest.com.

Party like a Bavarian at these Tucson Oktoberfest events

More than 6 million people are expected to party hard at this year’s Oktoberfest in Munich, Germany, which started Sept. 21 and runs through Oct. 6.

Startup teams and mentors listen to practice business pitches as part of IdeaFunding.

Benjamin Renguist, who founded startup GenetiRate, works in his lab at the UA Agricultural Center.

Evan Westman, co-founder of Ceres AgTech, said his team has been able to connect with local mentors, and IdeaFunding’s pitch training helped him present a case for his company.

Ben Knapp and Hannah Eherenfeldt, founders of ReSuture, pitch their idea for a vascular surgery training platform at an IdeaFunding practice business-pitch session.