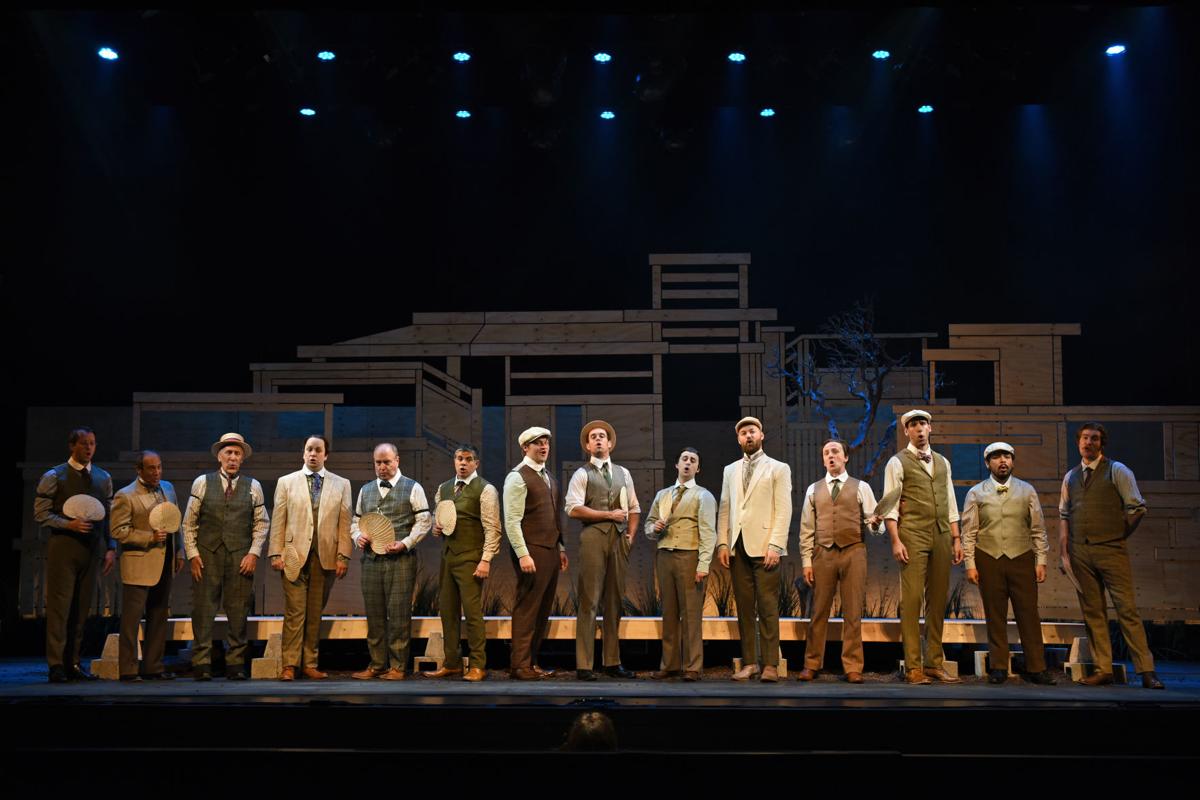 Composer Daron Hagen said he knew an opera about the massacre that occurred at Frank Lloyd Wright’s Taliesin estate would be a hit when he sat down to write it with Irish poet Paul Muldoon. “Shining Brow” first premiered in 1993. 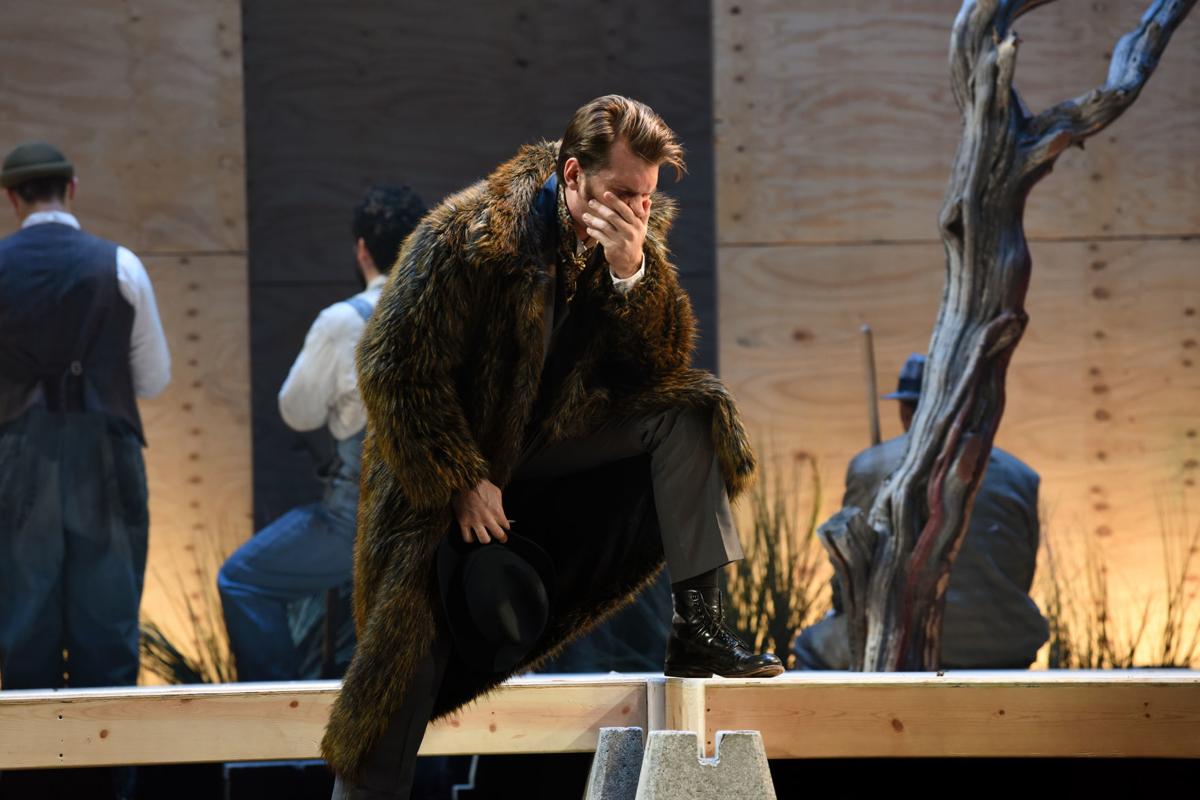 Arizona Opera opened its 2019-20 season with “Shining Brow,” which takes the massacre at Frank Lloyd Wright’s Wisconsin estate and places it at his Scottsdale estate.

The massacre at Frank Lloyd Wright’s Taliesin estate in Wisconsin had all the makings of a great opera: Infidelity, sex, betrayal and horrific, bloody murder.

So when Wisconsin native and budding composer Daron Hagen was commissioned in 1991 by the Madison Opera to compose an opera about the famous architect it was obvious which part of Wright’s story he and his librettist, Irish poet Paul Muldoon, would hone in on.

“Paul and I sat down together and decided the point in his life that we liked him the most and thought he was the most interesting operatic character” was the massacre at Taliesin, he said. “It’s got everything.”

The opera, Hagen’s first, was a hit when it premiered at Madison in 1993 and it’s gotten rave reviews over the years since.

Arizona Opera is opening its MacDougall Red Series of chamber operas this weekend with the world premiere of the “Taliesin West” version of “Shining Brow,” a revised version of the opera that features a nearly all-male cast.

We caught up with Hagen last week as he was waiting for the opera to open for its Phoenix run last weekend to talk about the “Taliesin West” version.

First the story: Frank Lloyd Wright was shacking up with his mistress, Martha “Mamah” Borthwick Cheney — the wife of a client — and her two kids at his palatial estate in Spring Green, Wisconsin, outside Madison in summer 1914. While Wright was in Chicago on business on Aug. 15, his chef/handyman brutally murdered Cheney and her young kids with a hatchet as they ate lunch on the patio. He then locked other workers inside the estate and set it on fire. As men tried to escape the inferno, the chef attacked them with a hatchet. In all, seven people died and only two survived.

When it commissioned Hagen, Madison Opera left the door open when it came to deciding what part of Wright’s life to focus on. All they wanted, Hagen said, was an opera about Wright given his close ties to Madison.

Hagen grew up in Milwaukee in a house that was modeled after a Wright design. He knew about the architect and the story of the massacre from an early age.

A hit out the gate: “Shining Brow” was a critical hit from that first performance in 1993.

“It’s a terrible cliché but I’m going to say it anyway: We knew it was a hit when we wrote it,” Hagen said. “We just knew. We were standing at the back rail when the thing ended and we knew that it was world-class work and it launched my career as an opera composer.”

The Taliesin West version: Hagen has written several site-specific versions of “Shining Brow” including one that was written for a small chamber orchestra. But this version might be the most ambitious.

The “Taliesin West” version cuts 30 minutes from the 120-minute opera and eliminates the female chorus. There are only three female leads: Mamah Cheney, the maid and Wright’s wife, Catherine Wright, who refused to divorce her husband even though she knew he was having an affair with Cheney.

“I loved the cuts. I revised the libretto … and created a new interpretation. Roles are eliminated, like female townspeople,” Hagen explained. “This particular story has an intensity now that it didn’t have back in the early ’90s. It’s a different story. It has another layer that I find fascinating and that is the subjugation of women by men, which (stage director Chas Rader-Shieber) has played so intelligently.”

“I am so proud of how smart this production is, and I have never really said that about my operas before,” he added.

So why Taliesin West?: An Arizona version of “Shining Brow” is a no-brainer given the state’s ties to Frank Lloyd Wright. Wright had been a winter visitor in Arizona beginning in 1935, dragging along his Taliesin Fellowship, which brought aspiring architects to work with the icon. In 1937, he bought land on the southern slope of the McDowell Mountain range overlooking Paradise Valley and built his winter home and architecture school. Today, Taliesin West is the main campus for The School of Architecture at Taliesin and home to the Frank Lloyd Wright Foundation.

Run time: 90 minutes with one intermission

There's much to like in 'Fellow Travelers,' the latest big risk by Arizona Opera

Opera explores gay relationship in the backdrop of McCarthyism and efforts to persecute gays in 1950s Washington, D.C.

Documentary traces Tucson native's journey from her hometown to Hollywood and beyond.

Composer Daron Hagen said he knew an opera about the massacre that occurred at Frank Lloyd Wright’s Taliesin estate would be a hit when he sat down to write it with Irish poet Paul Muldoon. “Shining Brow” first premiered in 1993.

Arizona Opera opened its 2019-20 season with “Shining Brow,” which takes the massacre at Frank Lloyd Wright’s Wisconsin estate and places it at his Scottsdale estate.