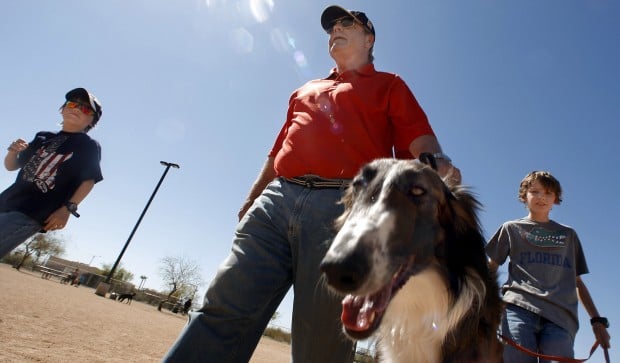 Kenneth Costich and his sons Lee, left, and K.J. go for a walk with Bandit, a Russian wolfhound, at Udall Park. Bandit is a psychiatric service dog who helps Costich, a Vietnam veteran, manage his post-traumatic stress disorder.

A dog has done what doctors couldn't do for combat veteran Lucien Masson.

Psychiatrists, drugs, group therapy, anger-management classes - none of them did much to curb the nightmares, panic attacks and road rage he's battled for decades after serving in Vietnam.

Then Sascha, a Russian wolfhound, came to live with the former Marine.

The dog, trained to sense the onset of nightmares, now wakes Masson before they happen by licking his face or switching on a light with his paw.

If strangers get too close in public, Sascha creates a buffer zone, inserting himself between his master and the crowds.

If Masson gets irate in traffic, a long, slender nose pokes from the back seat into the space between the front seats, coming to rest on his knee in search of petting.

Masson strokes the animal and takes a deep breath, reminding himself not to get worked up over nutty drivers.

"This dog is the best medicine I've ever had," said Masson, 60, of Pearce, a mining ghost town near Benson, about 90 miles southeast of Tucson.

"I've spent the last 15 years on antidepressants. I've gone through every group therapy at the veterans hospital. I've been to anger management two or three times and this is helping me more than all of that."

Masson is one of several area veterans with post-traumatic stress disorder who are working with psychiatric service dogs to reduce their symptoms - an approach generating so much positive feedback that the federal government will spend millions to study it over the next few years.

Former Army soldier Kenneth Costich of Tucson started working with another Russian wolfhound a few months ago and calls the results "amazing."

Costich, 68, also a Vietnam veteran, was crippled for years by nightmares of death scenes and anxiety so intense that a helicopter flying over his Foothills home would send him into hiding. To him it sounded "like an AK-47 on full automatic."

He tried playing golf to relax, but instead had panic attacks. "I'd see a golfer in a tree line looking for a ball and to me it looked like someone with a weapon."

With Bandit watching over him, Costich now feels at ease. "I feel protected because I know he won't let anything happen to me."

Costich and Masson received their dogs for free through Operation Wolfhound, a new Southern Arizona-based organization that solicits dogs from breeders around the country and trains them at no charge.

Alicia Miller, 39, of Elfrida, east of Tombstone, and her husband, Robert, 43, founded the outfit several months ago and expect to place 20 dogs with veterans by June. Each animal gets 50 hours of initial training, then works with the Millers once a week thereafter for six months to a year.

The two, both military veterans with physical disabilities, take no money for their efforts. A number of organizations have pitched in to pay for things like dog food and airline travel for the animals.

Alicia Miller, who has owned, trained and shown Russian wolfhounds, also known as borzoi, for years, said the breed is perfect for the job. They think independently, are intuitive and don't bark much - a big plus because people with PTSD tend to startle easily.

A Tucson-based nonprofit, Handi-Dogs, Inc., which has been training dogs for people with physical disabilities for decades, recently branched out into training psychiatric service dogs for veterans. The two-year training costs about $5,000, and veterans can bring their own dogs, as long as the animals can pass tests for temperament.

"We've had everything from Pomeranians to Rottweilers," said Joanie Mauger, president and CEO of Handi-Dogs.

Canines are suited for the sensitive work, she said, because they can see, hear, smell and feel things that humans can't - such as minute changes in heart rate, sweat and breathing.

The group's researchers recently received a $300,000 grant from the Army for an 18-month study to gauge the method's effectiveness.

The Department of Veterans Affairs will spend another $5 million over three years on similar studies.

In Southern Arizona, many are looking forward to the results.

"As far as I'm concerned," said Alicia Miller, "this is the closest thing I've ever seen to a miracle."

Contact reporter Carol Ann Alaimo at calaimo@azstarnet.com or at 573-4138.

Hero or criminal? Who is Julian Assange and what does he stand for

Eruptions in La Palma are the strongest so far

Eruptions in La Palma are the strongest so far

For Star subscribers: Sen. Kyrsten Sinema knows the bride and groom but not guests who wore "disrespectful and racist costumes...and she strongly condemns such behavior," her spokesperson said after Bisbee wedding Saturday was beset by protesters.

Sophie and Tim Mason got so sick they nearly orphaned their four children.

Kenneth Costich and his sons Lee, left, and K.J. go for a walk with Bandit, a Russian wolfhound, at Udall Park. Bandit is a psychiatric service dog who helps Costich, a Vietnam veteran, manage his post-traumatic stress disorder.