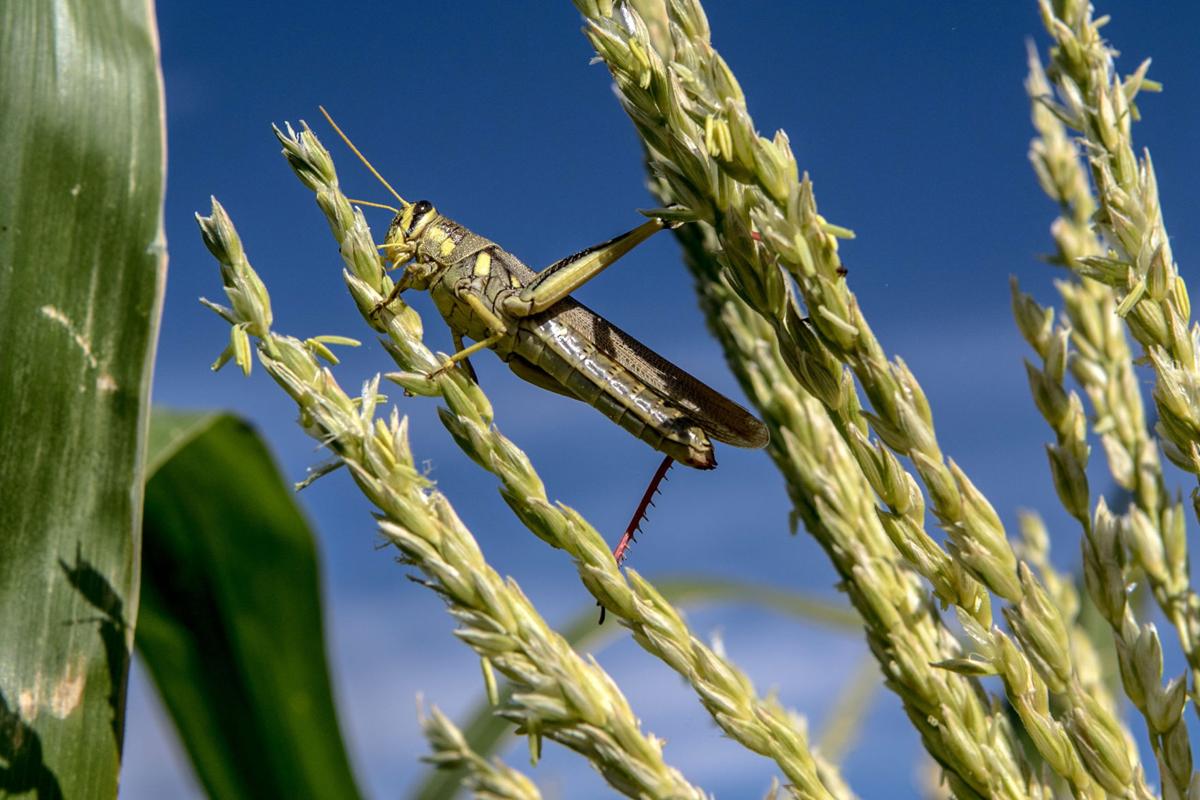 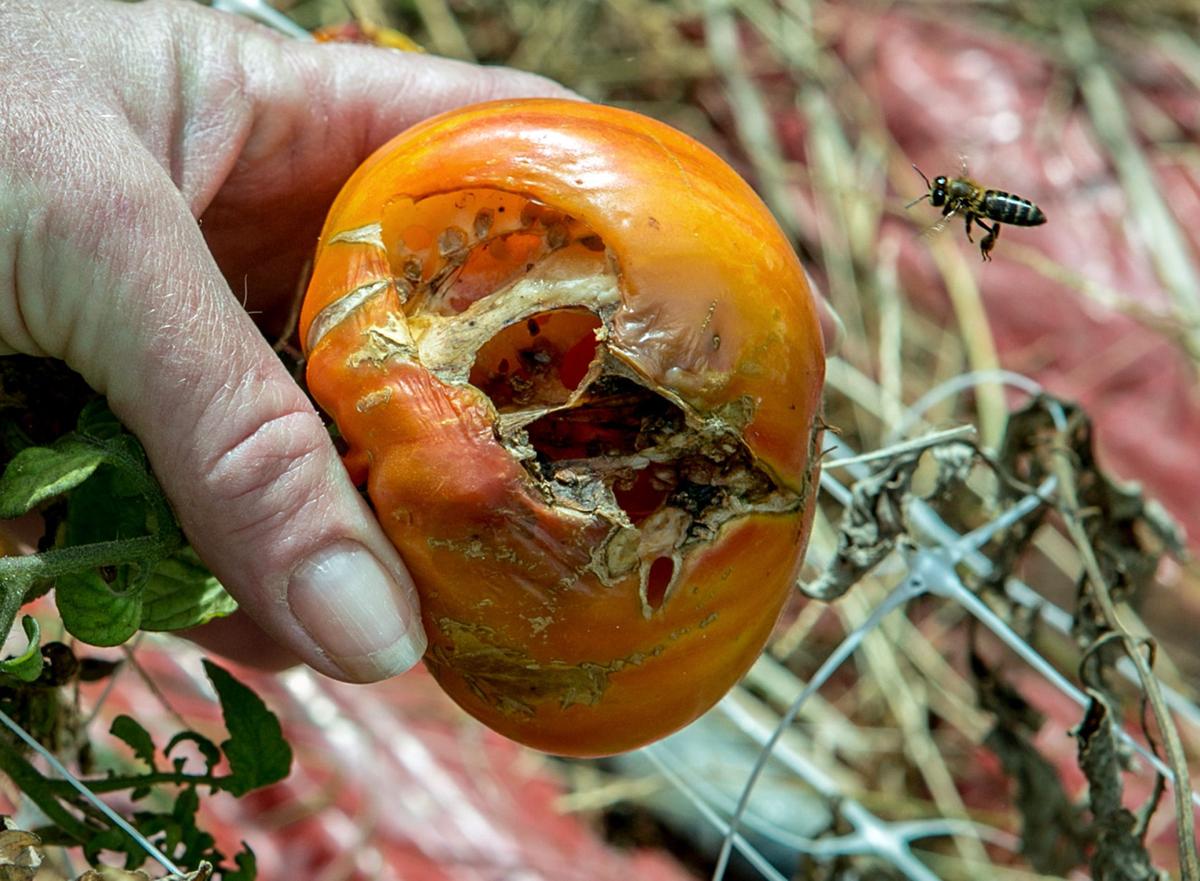 Grasshoppers munched through tomatoes and other plants at Harris Heritage Growers. 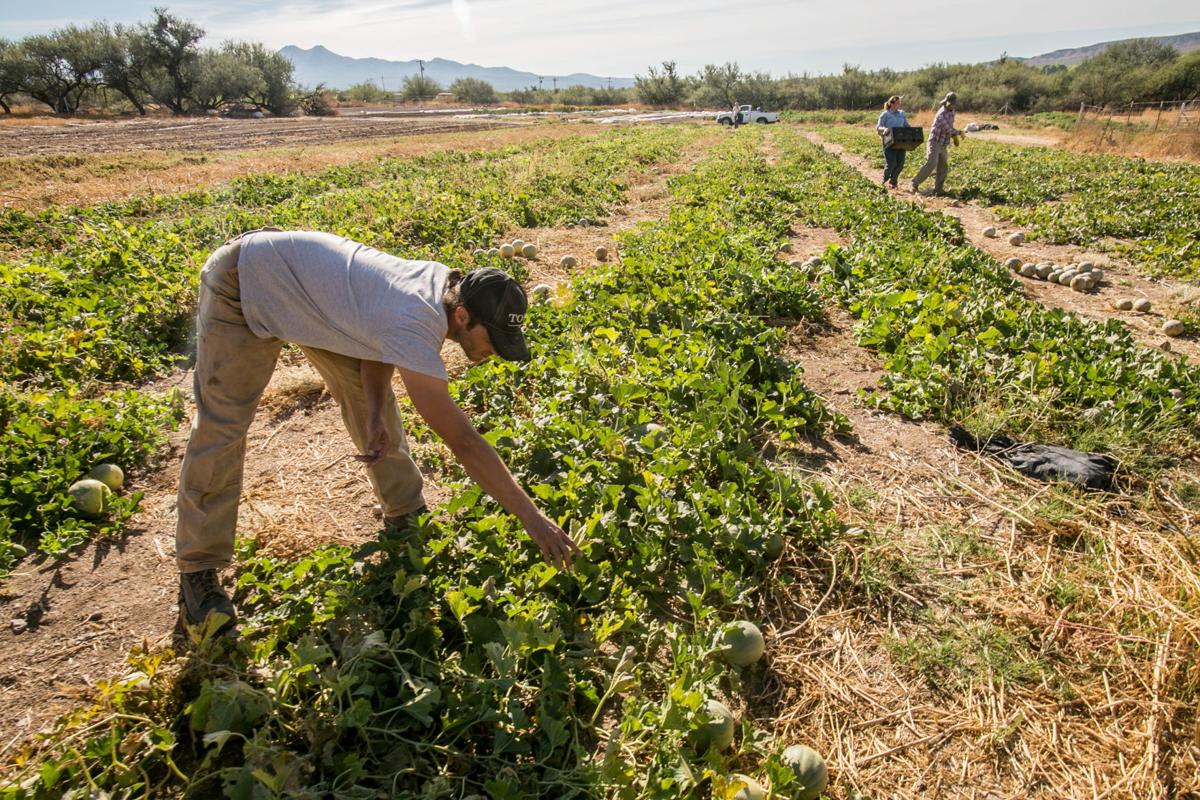 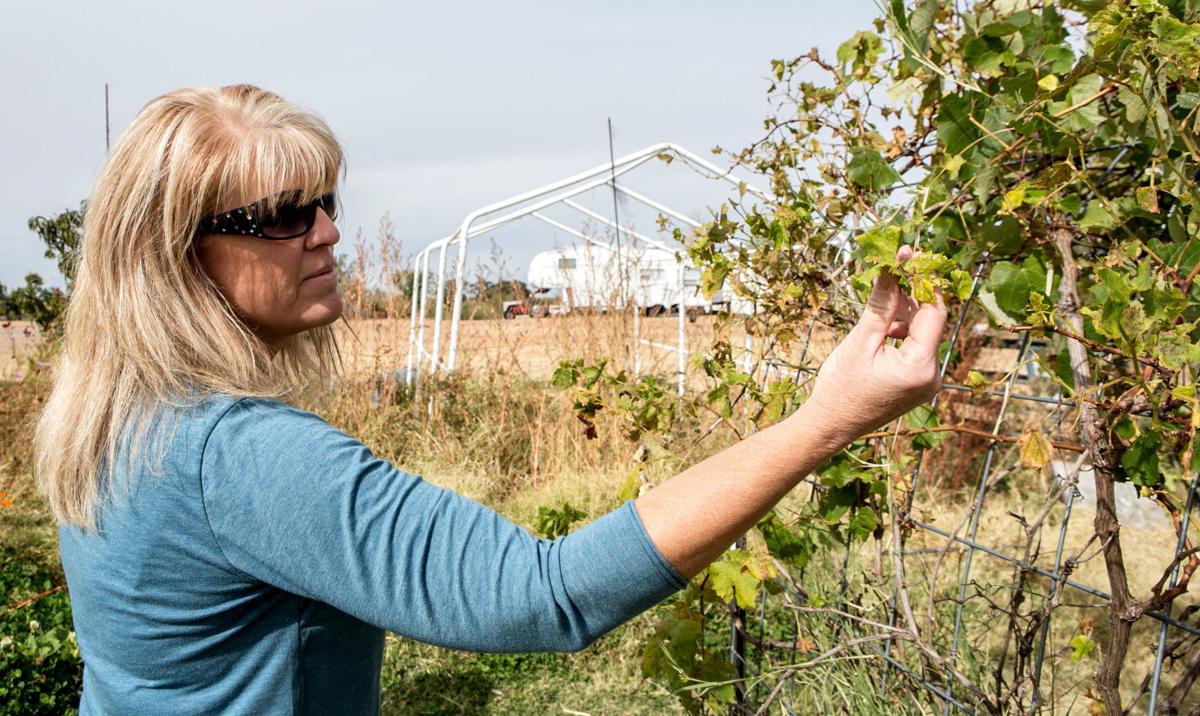 Walking through fields on a farm near Cascabel as it teemed with grasshoppers was like “parting the Red Sea.”

The grasshoppers arrived in early September, and each step among the crops at Sleeping Frog Farms sent dozens of grasshoppers jumping from underfoot, said CJ Marks, co-owner of the organic farm about 20 miles north of Benson.

Last week, the clicking of grasshoppers seemed to come from all corners of the farm while grasshoppers clung to branches, munched on cantaloupe and buzzed among the corn stalks. And that was after most of them had already died off.

Grasshoppers are a relatively harmless curiosity in many of Tucson’s backyards, but they pose a grave threat to farms, rangeland and gardens in rural areas. Organic farmers and gardeners from Douglas to Cascabel said they saw an unusually large number of grasshoppers arrive in September and wreak havoc on their crops, flowers and bushes.

At Sleeping Frog Farms, Marks said the grasshoppers feasted on lettuce, chard, kale and other crops, forcing him to mow down the leftovers and cover new plantings to protect them.

The hollyhocks in Dianna Isaacson’s garden west of Benson “look like skeletons,” and her mulberry tree was “stripped bare” after grasshoppers munched on their leaves.

“I’ve never seen anything like this,” Isaacson said. “At first, there were a few. And then you realize day after day there’s more of them.”

Officials with county and state agencies referred questions about grasshopper infestations to the U.S. Department of Agriculture, which said the grasshopper surge is isolated, and survey data do not show widespread populations in Arizona.

Goggy Davidowitz, a professor of entomology at the University of Arizona who wrote his dissertation on grasshoppers, saw an “impressive number” of grasshoppers in the grasslands near Sonoita in September.

In a semi-arid environment like that of Southeastern Arizona, insect populations “fluctuate very dramatically with rain,” he said.

The increase in grasshoppers likely is the cumulative effect of three consecutive seasons with well-spaced rains that allowed plants to flourish and provided more food and habitat for grasshoppers, he said.

The Douglas and Sierra Vista areas each saw about 2 more inches of rain than normal in the 2016 monsoon season, while the Benson area lagged its average by about a half-inch, according to the National Weather Service in Tucson.

Rainfall during the winter months kept pace with normal years, the weather service reported. The 2017 monsoon season was marked by deluges in July, but rainfall slowed in the latter part of the season.

After the strong 2016 monsoon season, more grasshoppers survived and were able to lay their eggs in pods in the ground when winter arrived, usually between 20 and 200 eggs depending on the species, Davidowitz said. As a result of more eggs being laid, more grasshoppers emerged from the soil when the weather warmed up around March or April.

When the summer heat arrived, grasshoppers “estivated” in the ground, which is basically hibernating from heat, he said. They emerged again when monsoon rains replenished plant life. Usually, there are two or three generations of grasshoppers each year.

As their name indicates, grasshoppers prefer eating grasses, and they also enjoy broad-leafed plants, Davidowitz said. But they switch to what’s available when their preferred food is gone.

At the Arevalos Farm in McNeal, grasshoppers moved onto the three acres Aaron Cardona planted with beans and ate about a quarter of the crop. At Curry Seed and Chile Co. in Pearce, the grasshoppers were worse than normal, but luckily haven’t attacked the chiles and alfalfa.

Farmers and gardeners reported seeing assorted species of grasshoppers that varied in size and color, including bright-blue grasshoppers and black ones with red under their wings.

Arizona has the greatest diversity of grasshopper species in North America, Davidowitz said. Some thrive in the grasslands, while others live in the “sky islands” and everywhere in between.

The Las Milpitas farm on Tucson’s west side, run by the Community Food Bank of Southern Arizona, is seeing “definitely more grasshoppers than what we’ve seen in the past,” said farm manager Chris Lowen.

However, the farm is in a more urban environment than many other farms, which means it is surrounded with less grass and natural habitat for grasshoppers, Lowen said.

Tanque Verde Ranch on Tucson’s east side saw an “unusually large number of grasshoppers” about a month ago, but they are gone now, said Terry Hanley, assistant general manager of the ranch.

Organic farms do not use chemical sprays as insecticides. Instead, they combat grasshoppers with semaspores, which sicken grasshoppers, and diatomaceous earth, which damages the exoskeletons of insects.

However, farmers said those measures weren’t cost-effective on large areas of land and semaspores don’t function during rainy periods. Instead, they are waiting for a hard freeze to get rid of the grasshoppers.

With the threat of grasshoppers still looming, Purvis said she is waiting to plant spinach, beets, carrots and other fall crops.

Cardona is still watching grasshoppers eat through the leaves of his plants and then start on the beans.

“I keep thinking the cold weather will take them down,” Cardona said. “They’re still here.”

In the meantime, Purvis has a secret weapon: turkeys. A half-dozen of them made their way among the rows of plants last week gobbling grasshoppers.

While an abundance of plants nourished grasshoppers, the birds who prey on grasshoppers also found themselves with an abundant food supply, Davidowitz said. As the predator population grows, it bodes well for fewer grasshoppers next year.

You can lend a hand, literally.

Tortoise beetle larvae can't do much damage to plants

Q: These bugs are eating my morning-glory plant. Can you please tell me what they are and how I can get rid of them?

Gentle giants of the insect world

Giant mesquite bugs might have an imposing appearance, but they are harmless to people. Video by Doug Kreutz, Arizona Daily Star.

A weekend of garden exploration awaits in Bisbee, Sierra Vista and Hereford Sept. 7-8.

All things green in Tucson

Perk up your plants with this fast fix

This time of year, your tomatoes are tired, your squash is sulky — even the peppers are petering out.

A freeze watch for much of Southeast Arizona will be in effect late Thursday night and Friday morning, according to the National Weather Servi…

Grasshoppers munched through tomatoes and other plants at Harris Heritage Growers.