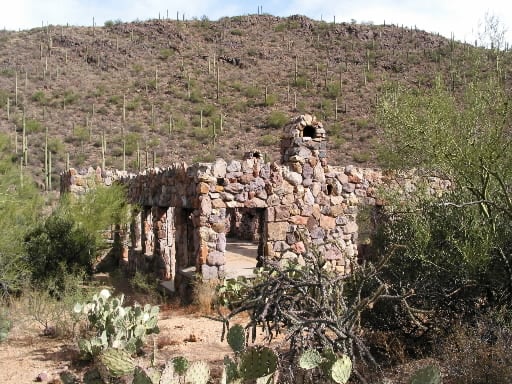 These are the remains of a stone house built in the Tucson Mountains by onetime Arizona Daily Star city editor Sherry Bowen in the 1930s. Today, it’s still accessible by foot. 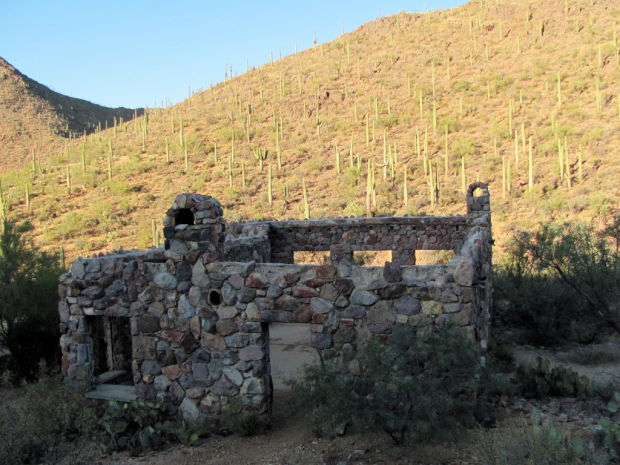 The remains of a homesteader’s spacious stone house — built in a remote corner of the Tucson Mountains in the 1930s — will be dedicated Friday by Pima County officials for its historic value.

A dedication ceremony begins at 9 a.m. at the entrance to the Bowen Trail in Tucson Mountain Park west of the city. It is open to the public.

Events will include a ribbon cutting and unveiling of an interpretive sign — but not a visit to the house, which is along the trail about 1.5 miles from the trail head. Hikers may trek to the house, but it’s advisable to start very early and carry plenty of water if you choose to go in these days of hot weather.

The stone structure, with two fireplaces and large windows, was built by Sherry Bowen, who was a typesetter and later city editor at the Arizona Daily Star.

Bowen and his wife, Ruby, moved to Tucson from Illinois in the late 1920s. They homesteaded 2,000 acres in the Tucson Mountains in the 1930s and lived in a cabin there while Bowen built the stone house.

They later moved away, and the homestead became part of Tucson Mountain Park in 1983.

“The house is still in pretty good shape” except for the missing roof and windows, said Valerie Samoy, special staff assistant with Pima County Natural Resources, Parks and Recreation. “Lots of people ask about it, and we want to note its historic value and provide some information” on the interpretive sign that will be placed near the house.

“Our open spaces and our past really help define us,” Samoy said. “We want to help make that connection between the past and the present.”

She said the Bowens’ daughter, Gloria, who was a professional ballet dancer and now lives in Nevada, will attend the dedication ceremony.

• What: Dedication of a historic stone house built in the 1930s by a homesteader in the Tucson Mountains.

• Details: The event is free and open to the public.

Tucson firefighters responded to a three-alarm fire at a hotel construction site near the University of Arizona Saturday afternoon.

A survey has ranked Tucson among the wildest cities in the United States.

Tucson firefighters responded to a three-alarm fire at a hotel construction site near the University of Arizona Saturday afternoon.

These are the remains of a stone house built in the Tucson Mountains by onetime Arizona Daily Star city editor Sherry Bowen in the 1930s. Today, it’s still accessible by foot.