The Regional Partnering Center, owners of the new shuttle service, introduced two shuttles to partners and visitors during a ceremony at the Sabino Canyon Visitor Center Saturday morning. The shuttles were custom-built for Sabino Canyon, Marques said.

Tucson Electric Power donated $1.5 million and provided a $1 million interest-free loan to fund the RPC’s purchase of the five shuttles, which cost $500,000 each. TEP also built the electric infrastructure for the charging stations for the shuttles.

David Hutchens, TEP president and CEO, said the shuttle service is just one of many projects the company is working on to reduce greenhouse gas emissions.

“Our community has been and is asking us to do our part in finding a global solution to climate change,” Hutchens said. “And I can tell you by what you’ve seen today, what we’re doing here with the shuttles, and what I just talked about from a renewable energy standpoint, you can look me in the eye, we’re doing our part.”

After reviewing feedback visitors submitted in 2017 to the U.S. Forest Service, members of Friends of Sabino Canyon worked with then-Rep. Martha McSally to allow competitive bidding for a new shuttle service, Marques said.

The 30-year-old diesel vehicle service was noisy, smelly and outdated, he said. Based on public comments, the majority of visitors agreed, Marques said.

“If you have ever walked on a cloudy day where there’s overcast, the smell of those old shuttles would follow you for miles through the canyon because there was nowhere for the fumes to escape to,” he said.

McSally, now a U.S. senator, who said she would run the 7.4-mile trail in the canyon to train for marathons, echoed that statement, saying Sabino Canyon needed to modernize its shuttle service to meet the needs of tourists.

Satish Hiremath, chairman of the RPC, honored the Native American tribes — including the Tohono O’Odham and Pascua Yaqui — that called Sabino Canyon home long before visitors hiked the canyon.

“This sacred land continues to be important for the ongoing health, livelihood and economic vitality of our residents and visitors,” he said.

He said the electric shuttles will help preserve the canyon for future generations by eliminating the use of 15,000 gallons of gasoline each month, reducing carbon monoxide emissions by 400,000 pounds annually once the service is fully operational.

Since early September, nine Sabino Canyon Shuttle drivers have been testing the 62-passenger shuttles, starting in parking lots before training along the Sabino and Bear Canyon tour routes, roughly 6 miles of travel.

The fleet of five open-air shuttles will provide service to about 100,000 annual riders, according to a Coronado National Forest news release.

“I’m excited to give just a high-quality tour and a pleasant, clean, and quiet ride not only for the passengers but also for the hikers,” Bissonnette said. “A lot of people like to hike in the canyon and they’re not going to miss the smell of the diesel vehicles.”

The first shuttle was delivered for testing from Trams International, a California-based manufacturer, on Sept. 3.

“My drivers for the last month have been testing in the canyon, up and down, and things are going very well,” Bissonnette said.

Bissonnette also said Trams International staff were wrapping up testing of the new educational system on board for visitors.

“It’s a GPS triggered audio tour,” said Bissonnette. “This system is actually a lot quieter, it’s not going to be blasted through speakers. It’ll be through headphones at each seat.”

At launch, an English and Spanish audio version of the tour is available. More languages will be added later, Bissonnette said.

At each stop, the audio tour will let visitors know whether there is access to restrooms and water.

The shuttles also have fully integrated ticket sales, including cellphone payments and credit- and debit-card sales for visitors, giving them options for getting off and on the shuttles, forest officials said. The previous shuttle vendor operated on a cash-only basis.

“We like to think it’s a lot safer with this process, and this is why we went this route, because the drivers can focus on safety and quality of driving and the tour,” Bissonnette said.

To contact the reporters: Shaq Davis is at 573-4218 or sdavis@tucson.com; Stephanie Casanova is at scasanova@tucson.com.

Tickets for the Sabino Canyon route costs $12 per adult, $7 per child, free for children under 3, and $7 for onboarding (one-way hop on) when space is available, according to the Coronado National Forest.

Tickets for the Bear Canyon route costs $6 per adult, $4 per child, free for children under 3, and $4 for onboarding (one-way hop on) when space is available.

No start date for the new buses has been announced.

Walk Sabino Canyon at this time of year for superlative scenery.

Try these trails to work off some of that Thanksgiving feast.

Sabino Canyon -- with its creek flowing melodically and trees along the watercourse showing brilliant autumn colors -- is at its peak scenic season.

Trails high above Sabino Canyon offer a grand overview not seen by tram travelers and walkers on the canyon road. Video by Doug Kreutz, Arizon…

Sabino Canyon might rival Saguaro National Park for spectacular saguaro specimens -- from a rare crested giant to a tall, twisted survivor and…

They should write a novel called "The Bridges of Sabino Canyon."

Since Tucson combined its police and fire communications centers in 2018, hold times for 911 calls to police have been cut by three-fourths. 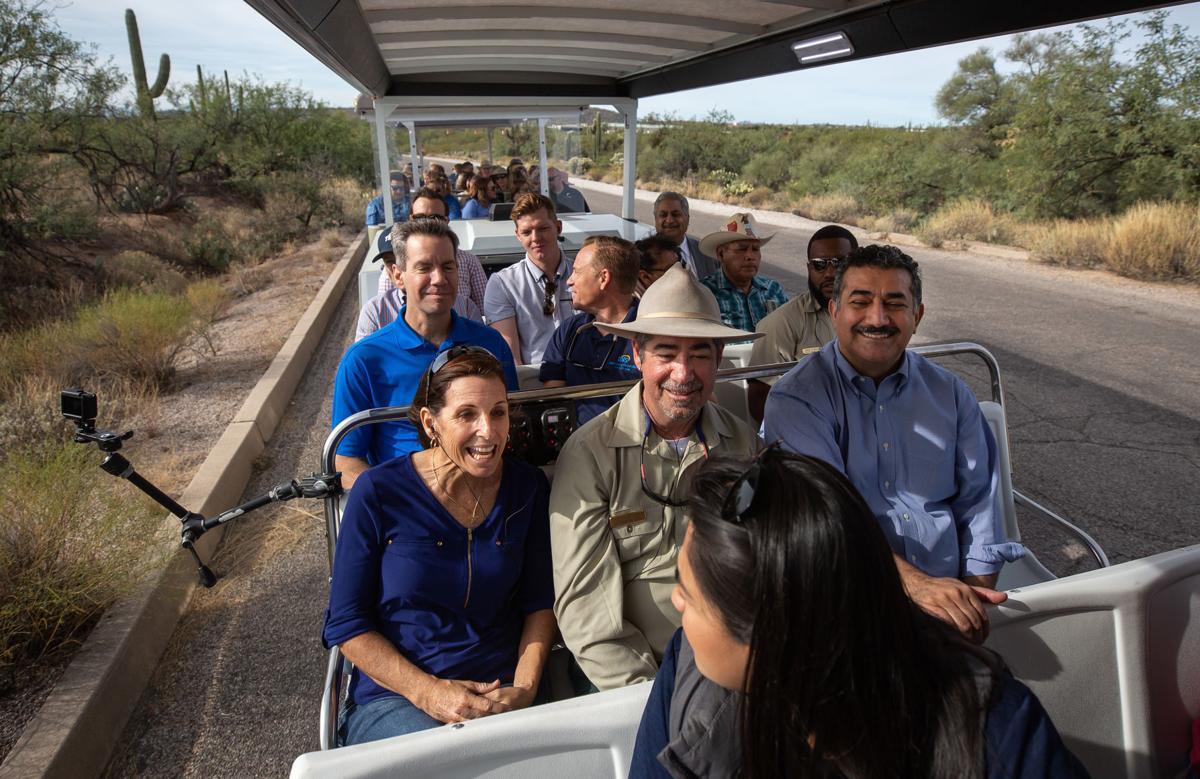 After reviewing feedback visitors submitted in 2017 to the U.S. Forest Service, members of Friends of Sabino Canyon worked with Sen. Martha McSally, left, then a representative, to allow competitive bidding for a new shuttle service. 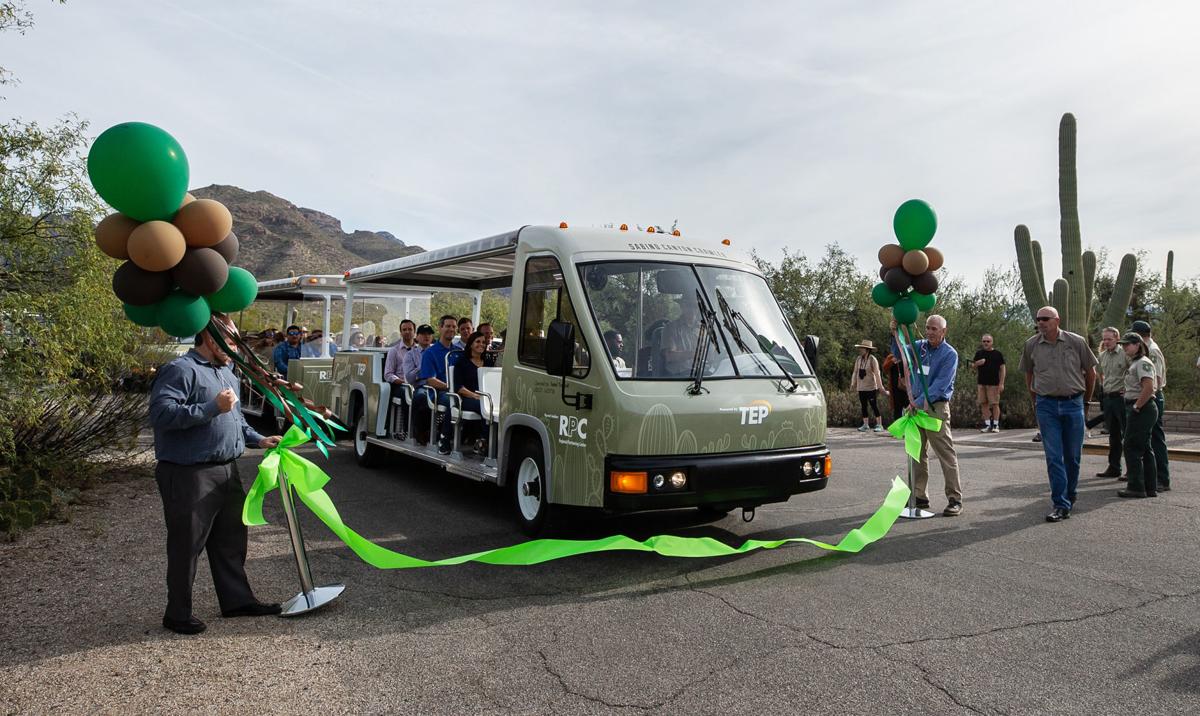 David Hutchens, TEP president and CEO, said the new shuttle service for Sabino Canyon is just one of many projects the company is working on to reduce greenhouse gas emissions.