Virus update: US moves toward broader promotion of masks. Here's what else happened today.

A company that heavily lobbied President Trump is part of the lucrative business of constructing the new steel wall along the border in Arizona.

An up-close look at the 30-foot-tall, rust-colored steel poles that make up the wall recently erected along the border in Organ Pipe Cactus National Monument reveals the words “Atlas Tube” on them.

Atlas Tube is the Chicago-based division of Zekelman Industries, a company run by Barry Zekelman, a Canadian billionaire who led a wide-ranging effort to urge Trump and other officials to place tariffs and import quotas on steel. That effort included a $1.75 million donation to a pro-Trump super PAC and meeting with Trump and others in April 2018.

So far, the wall in Organ Pipe stands along 5 to 10 miles of the border about 150 miles southwest of Tucson. Each panel of bollards contains eight 6-inch-wide bollards 4 inches apart. With those measurements, more than 30,000 bollards would be needed for the 43 miles of wall on Organ Pipe and Cabeza Prieta.

The rest of the wall on Cabeza Prieta will be built by Fisher Sand and Gravel, which is under scrutiny by the inspector general of the Department of Defense. The company’s head, Tommy Fisher, led what he called a “whirlwind media campaign” and paid lobbyists more than $100,000 to discuss the wall with lawmakers.

The inspector general probe, which is ongoing, came after the Washington Post quoted officials saying Trump personally and repeatedly urged the head of the Army Corps to award a $268 million contract to Fisher, even after Fisher’s bid was rejected. The value of the contract could rise to nearly $400 million if all options are exercised.

Zekelman’s lobbying effort, detailed last May by the New York Times, included a $1.75 million donation by Wheatland Tube, also a division of Zekelman Industries, to a pro-Trump super PAC in 2018.

Those funds made Wheatland Tube one of the largest donors to the America First Action super PAC in 2018, according to the Federal Election Commission. The only people who donated more to the PAC that year were: Las Vegas casino owner Sheldon Adelson and his wife; Texas bank president Andrew Beal; Miami casino owner Cherna Moskowitz; and Beverly Hills real estate developer Geoffrey Palmer.

America First Action is led by former officials and surrogates for the Trump administration, such as Linda McMahon, according to the PAC’s website.

Representatives of Zekelman Industries told the New York Times that the donation did not violate prohibitions on foreign political donations. Zekelman said he reacted favorably when presented with the idea of making the donation, but the final decision was made by the board of U.S.-based Wheatland Tube.

During an April 30, 2018, meal with Trump and others, Zekelman can be heard talking to Trump about tariffs and import quotas on steel, according to the New York Times.

A recording of the meeting was released in January by Lev Parnas, a former associate of Trump’s personal lawyer Rudy Giuliani.

Atlas Tube was founded in Ontario, Canada, in 1984, according to the company’s website, and has steel mills in Ontario; Chicago; Birmingham, Alabama; Blytheville, Arkansas; and Plymouth, Missouri. The company claims to be the “largest structural steel tubing producer in North America.”

All Atlas Tube products supplied for border wall construction are produced at the company’s facilities in the United States, according to a statement from Atlas Tube provided by Jelani Rucker, vice president of business development at Zekelman Industries. The words “Made in the USA” are stamped onto the bollards on Organ Pipe, along with the bollards’ dimensions and dates, such as “6/18/2019” or “8/23/2019.”

Rucker did not respond to a request for comment about the political donations and Zekelman’s comments in the Parnas recording.

Arkansas Gov. Asa Hutchinson announced in July that Atlas Tube would build a second steel mill in Blytheville after a Supreme Court decision the previous week allowed the Trump administration to fund the border wall.

Atlas Tube has begun a $150 million expansion of the Blytheville facility that will add over 500,000 square feet of manufacturing space and increase employment, according to the statement from Atlas Tube.

Scott Warren, a teacher with a doctorate in geography and a No More Deaths border aid worker, was among people charged with misdemeanors related to their humanitarian aid efforts along the border. 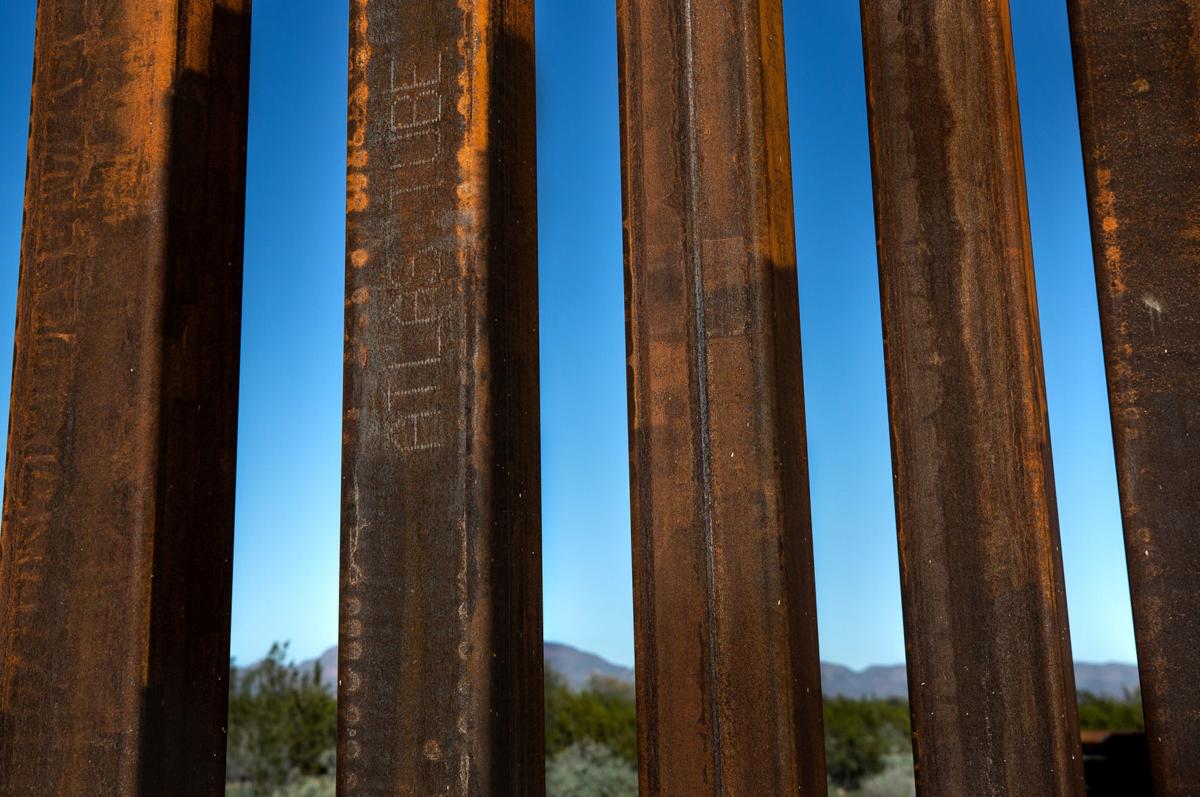 The words “Atlas Tube” stamped on a bollard of border wall east of the Lukeville port of entry, on Feb. 4, 2020. 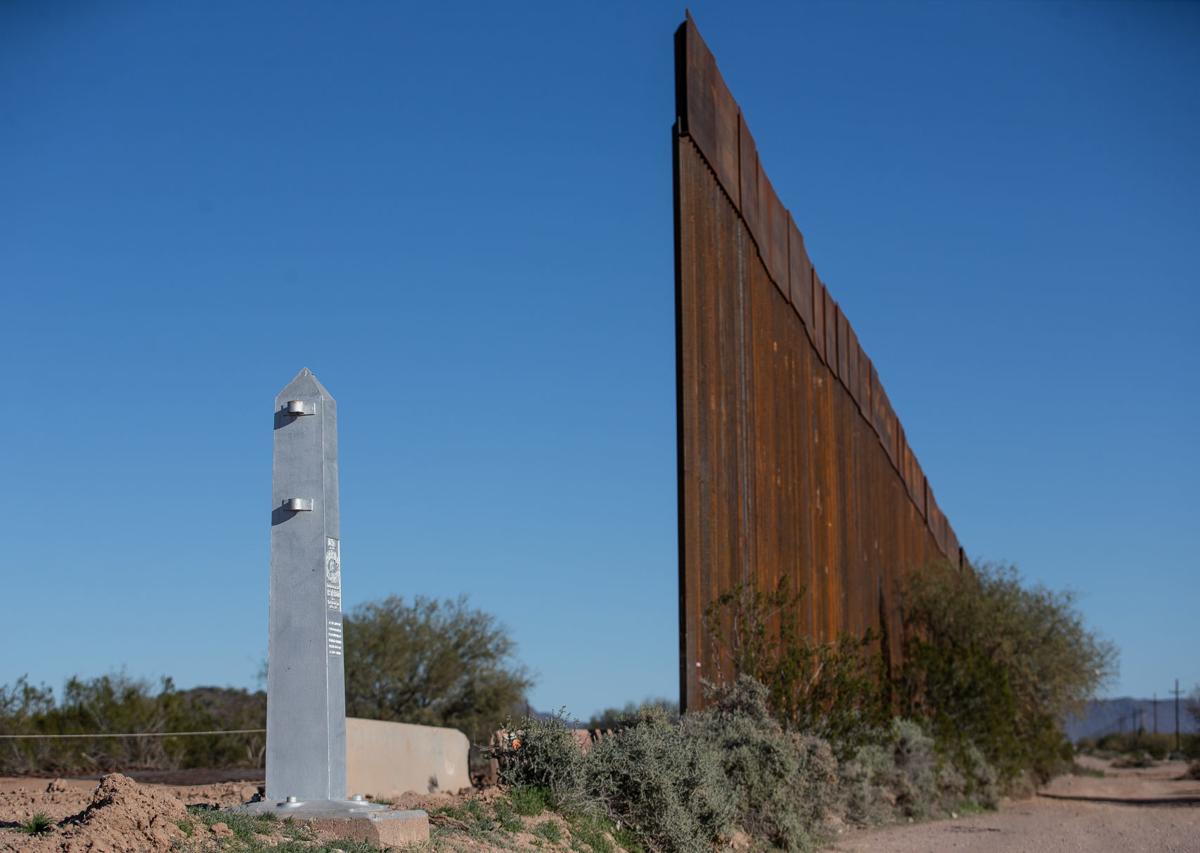 A border marker stands next to a newly installed segment of wall along the U.S.-Mexico border east of Lukeville. There are still many gaps — some short, some long — along the wall.