Walking through the Tucson Jewish Community Center’s sculpture garden can be both a serene and surreal experience.

Hidden away from the rumbling traffic just south of the center, where North Alvernon Way turns into East River Road, its pathways are lined with wild and whimsical figures like a scene straight out of “Alice in Wonderland.”

Standing men with heads of dogs, based on the mythology of Cynocephalus, look to the heavens in robes with their palms out, while a young elephant, resembling Dumbo in his early years, sits sullen on a nearby park bench.

There is a giant mousetrap and an equally large cupcake, and abstract remnants of a once-mighty oak tree twisting up into the sky in bright, brilliant colors. In “Lady of the Blue Agave,” a bronze created by sculptor Natalie Levin, a nude woman emerges from the desert plant, in a visual not unlike that of Botticelli’s “The Birth of Venus.”

“The spirit of the agave plant awakens into female form, as a flower deva blossoming toward the sun,” reads the description of the piece on Levin’s website, nataji.com. “The leaves unfold away from the core expressing the sensuousness of the inner goddess, as she unfurls upward in a subtle spiraling graceful motion.”

More than 40 works in all, some as tall as 40 feet, created by local, national and international artists, can be found in the garden, a hidden oasis that is free and open to the public anytime during the JCC’s regular business hours.

On Sunday, Oct. 24, the garden will welcome nine more pieces in an all-day Celebration of Sculpture event, featuring activities for children and adults, live music and artist talks.

In addition, 18 more artists will have smaller-scale sculpture on display in the JCC’s indoor fine art gallery.

Jennifer Selco, director of Jewish life and learning at the JCC, said while it is a regular occurrence to rotate in new art onto the garden grounds each year, the celebration surrounding it will be the first for the community center and a great way to showcase what has become an integral space for many Tucson residents over the years.

“The sculpture garden is at the heart of our facility,” Selco said. “It is a place where people can gather and reflect. We are always excited to bring the entire community together to appreciate and celebrate art.”

The garden was first established in 2009 in an effort to create a space that fostered fellowship, an atmosphere of tranquility, as well as educational opportunities, according to the JCC website, tucsonjcc.org.

The first piece installed was “Freedom Fighter,” a large-scale bronze sculpted by Robert I. Russin, and inspired by the Jewish resistance to the Nazis in the Warsaw Ghetto during World War II.

Russin, who died in 2007, wintered in Green Valley for decades with his wife, Adele.

While several of the pieces in the garden speak to the Jewish experience, that is not a requirement, Selco said. Themes for many of the works run the gamut.

Among the new additions this year is a 7-foot-tall figure made of springstone of two people embracing, called “The Hug” by Shona sculptor Gedion Nyanhongo; and “Flight 5: The Pursuit,” by Paul Orzech, a bronze figure, weighing about 100 pounds, of a person flying through the sky like Superman in attempt to find love.

Claire West, a member of the sculpture garden committee, said submissions come from all over the country and beyond, but there is no preconceived notion on what pieces fit better in the garden.

“It is nice to have a broad range of materials, colors, shapes and sizes,” she said.

The new pieces, which will be on display for the next year, join works by other established Tucson artists, such as Curt Brill and Barbara Grygutis. Grygutis is a founding member of the nonprofit, Sculpture Tucson, which has its own sculpture garden across River Road on the west end of Brandi Fenton Memorial Park.

When it is not hosting art-driven festivals, the JCC sculpture garden is a hive of activity.

Children enrolled in the JCC’s after-school program use it as a play area. It serves as a venue for Celebration of Israel events and during the pandemic, pre-vaccine, it was a space where people could come and explore while staying socially distanced on Sundays.

Sculpture garden committee chair Raymonde Zlotnikoff said the JCC has been making a push in recent years to attract more visitors to see the garden.

Zlotnikoff, a sculptor with her own work in the garden, said some people are under the impression that the art on display is only for JCC members to enjoy.

“We continue to try an educate the community that this is a place that is open to all,” Zlotnikoff said.

What: A Celebration of Sculpture

Where: In the sculpture garden and fine art gallery at the Tucson Jewish Community Center, 3800 E. River Road

Et cetera: The sculpture garden and fine art gallery are open to the public any time during the JCC's regular hours of operation — 5 a.m.-8:30 p.m. Mondays-Thursdays; 5 a.m.-6 p.m. Fridays; and 7 a.m.-6 p.m. Saturdays-Sundays. Visitors need to check in at the front entrance.

For Star subscribers: Take selfies in front of animated neon rabbits and against Instagram-specific backdrops at this new bar on Tucson's north side.

Saturday and Sunday will feature live music, step-dancing and vendors selling everything from shepherd's pie to shillelaghs.

Over 100 unique aircraft, displays and performers will be on hand for the largest selection of aircraft in the history of Davis-Monthan air shows.

Watch movies indoors or outside at this Tucson film festival

The Loft Film Fest returns this year with more than 40 films to choose from.

Thanks for staying open: Places in Tucson to unwind on Turkey Day 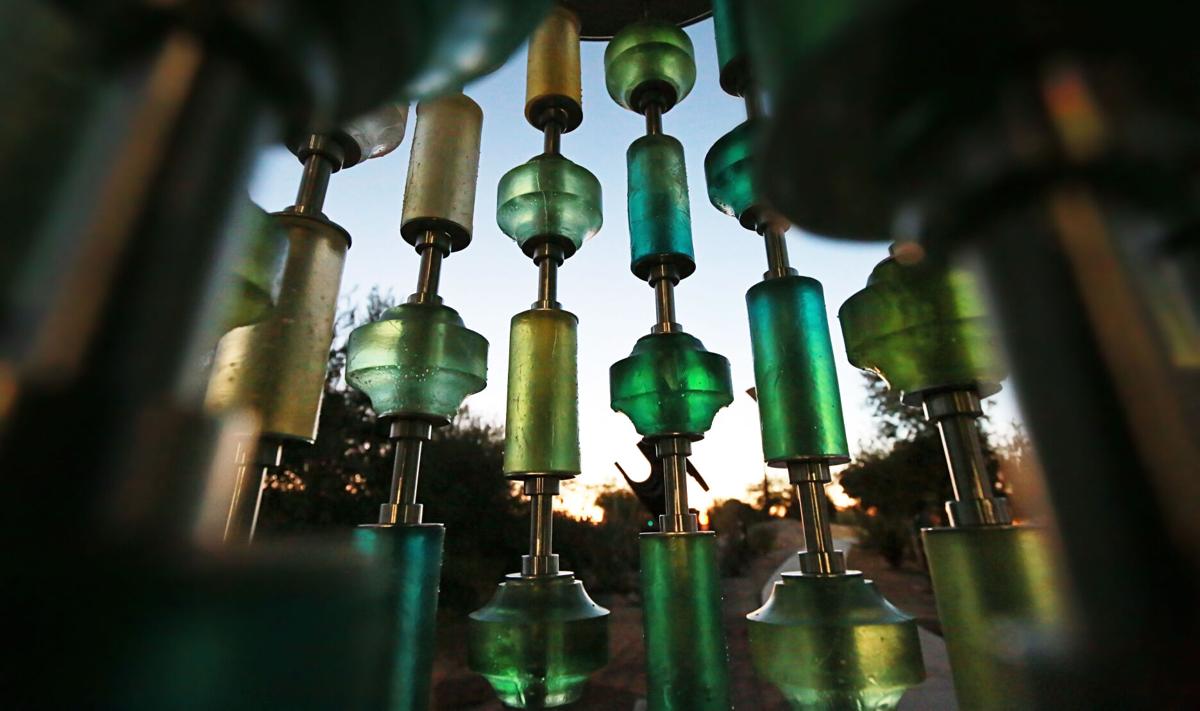 The “Monument of Grace” sculpture by Margaret and Michael Joplin is made out of stainless steel and glass. It can be seen at the sculpture garden at the Tucson Jewish Community Center. 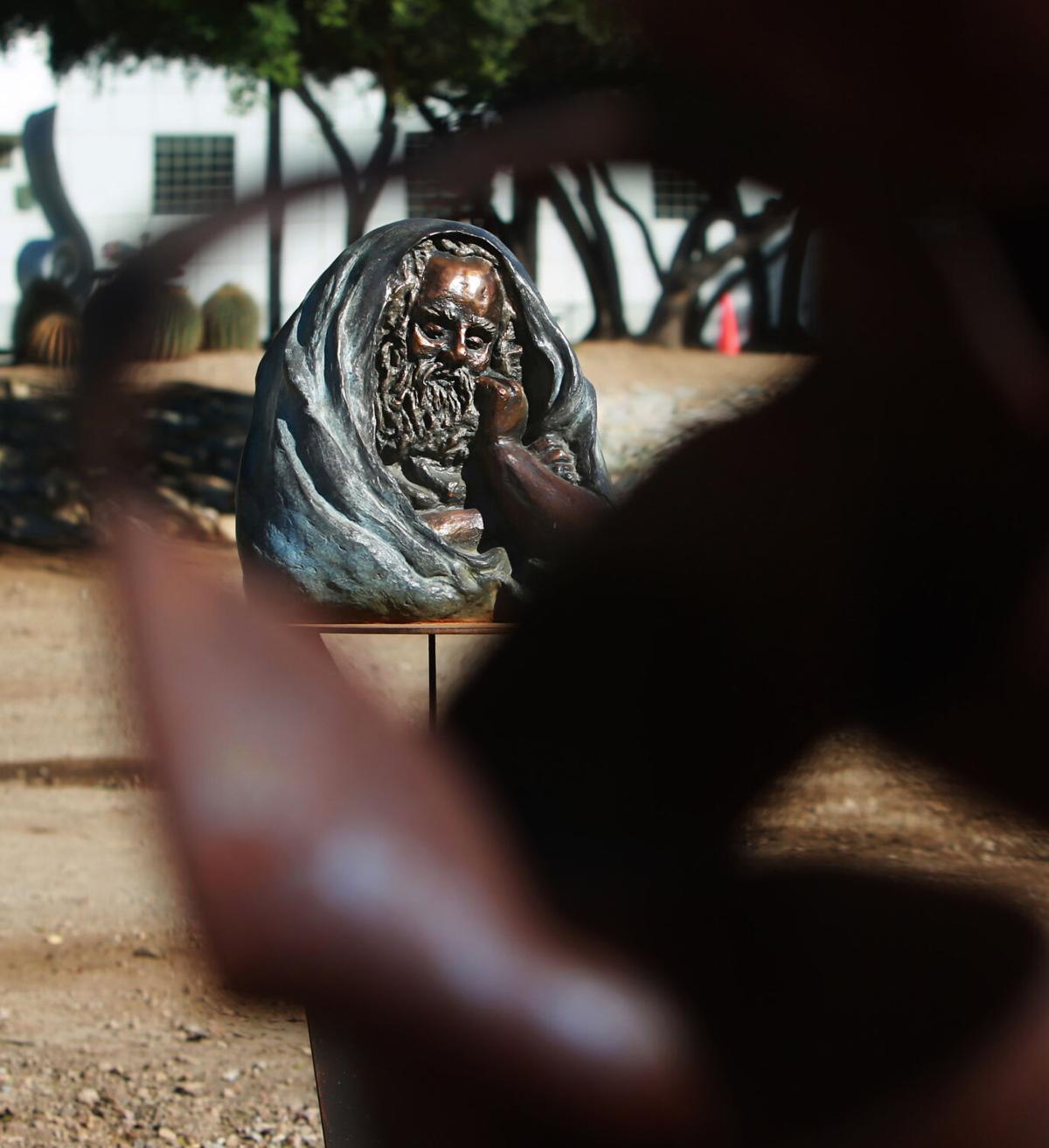 “In Contemplation Of Peace” by Raymonde Zlotnikoff is on display in the sculpture garden at the Tucson Jewish Community Center. 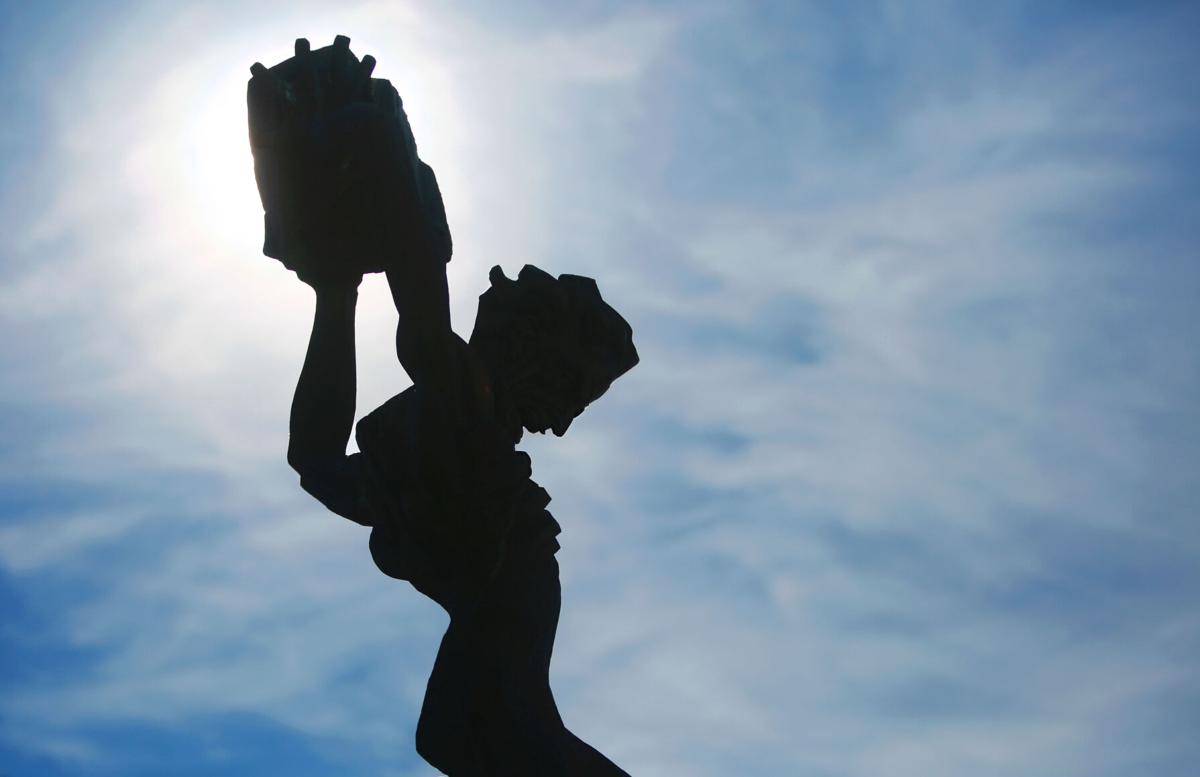 "Freedom Fighter" sculpture by Robert I. Russin was the first piece installed in the Tucson Jewish Community Center's sculpture garden. It is inspired by the Jewish resistance to the Nazis in the Warsaw Ghetto during World War II. 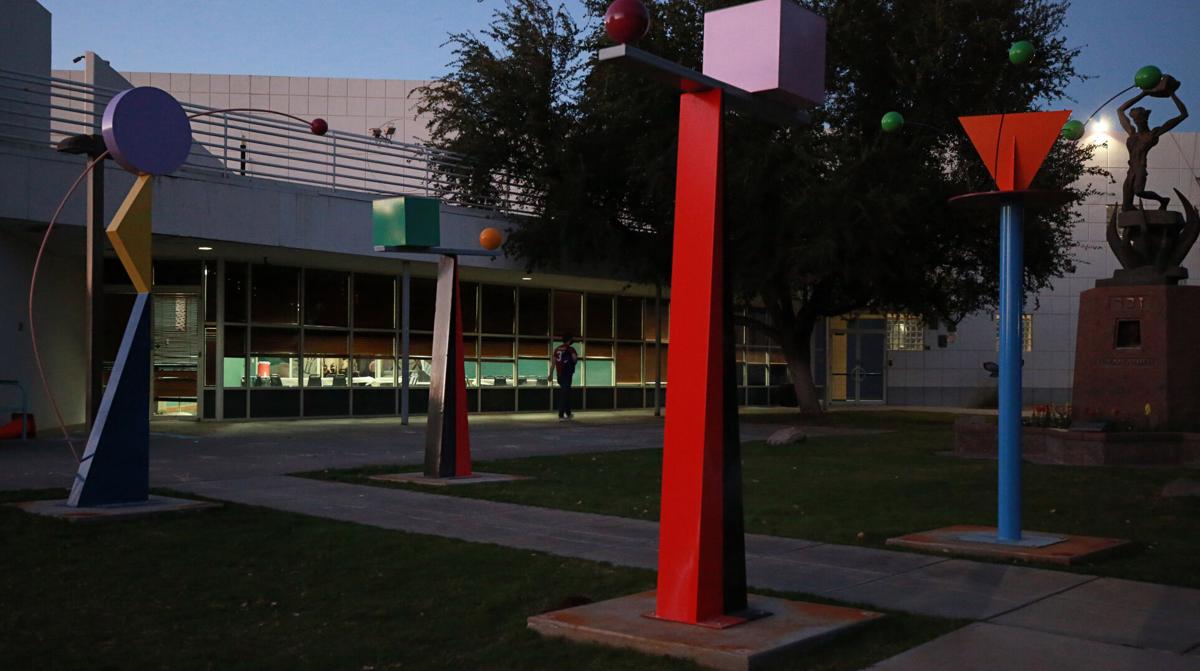 Z+Z by Peter Shire is among the pieces at the sculpture garden at the Tucson Jewish Community Center. 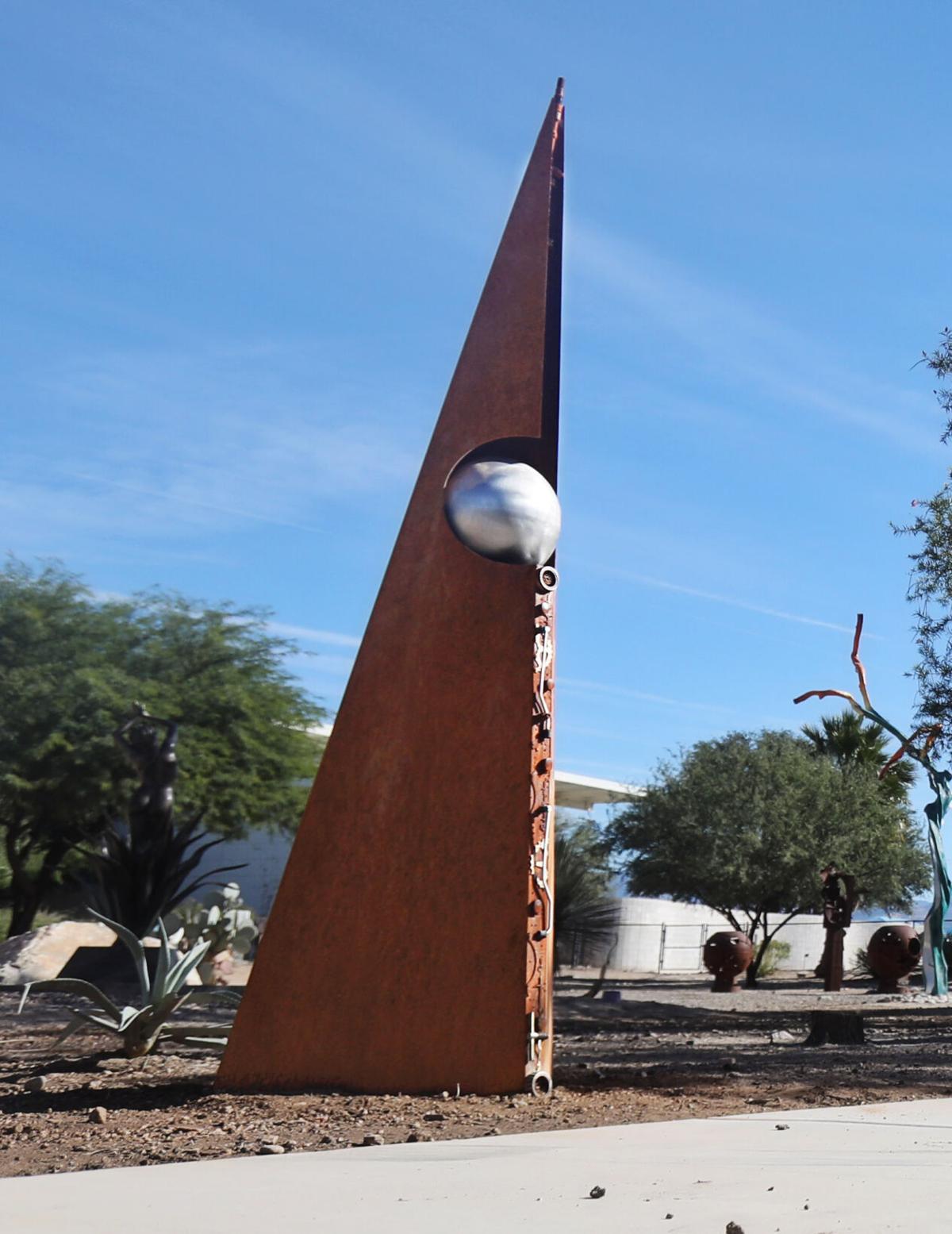 "Point of Contact" by Adam Homan is 7 feet tall, made of mild steel, stainless steel, found objects, and an electron accelerator. Point of Contact is one of nine sculptures that have been added to the Tucson Jewish Community Center's sculpture garden this month. 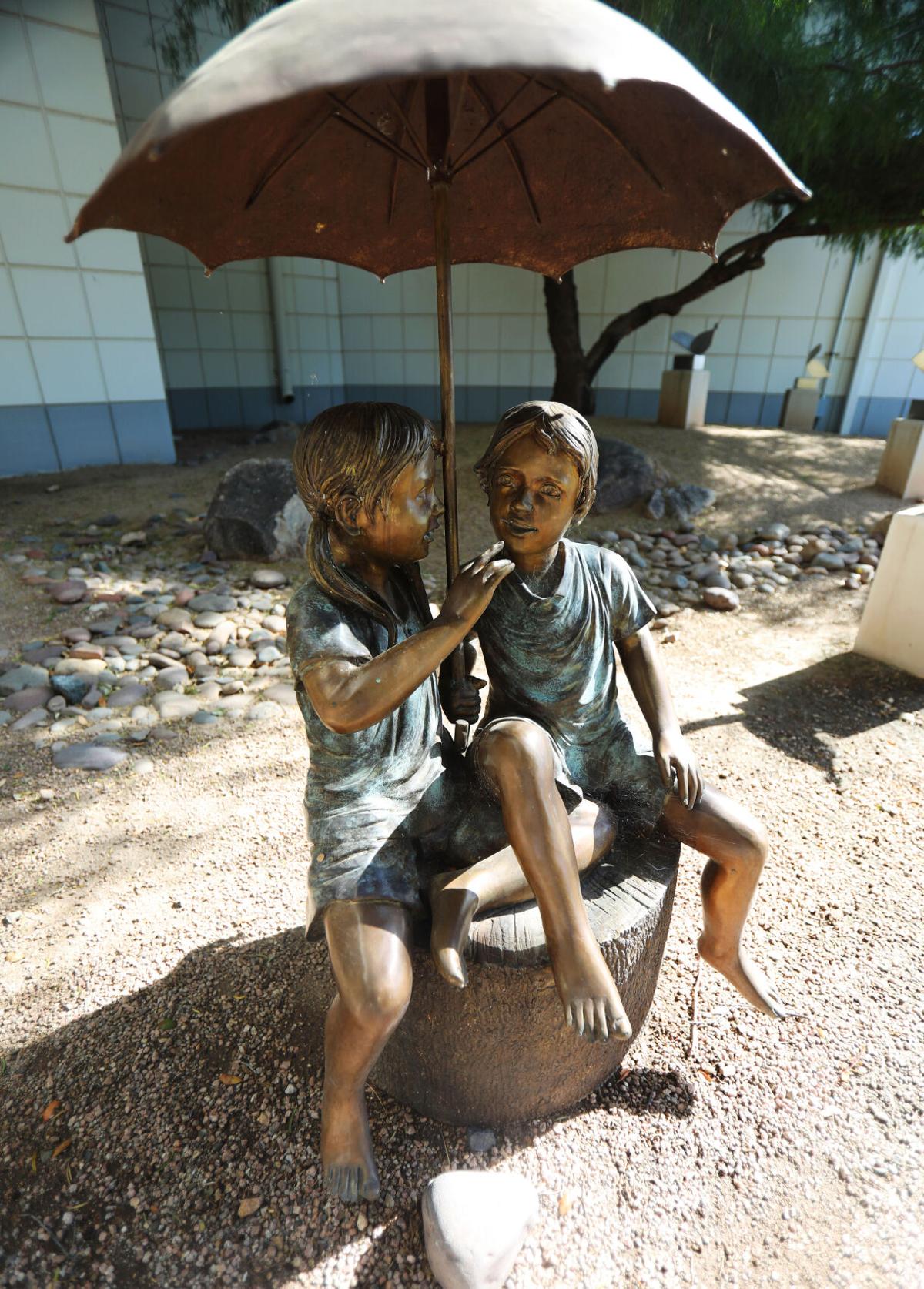 "Summer Showers" is a memorial sculpture by Thomas Marsh made out of bronze, on display at the Tucson Jewish Community Center. 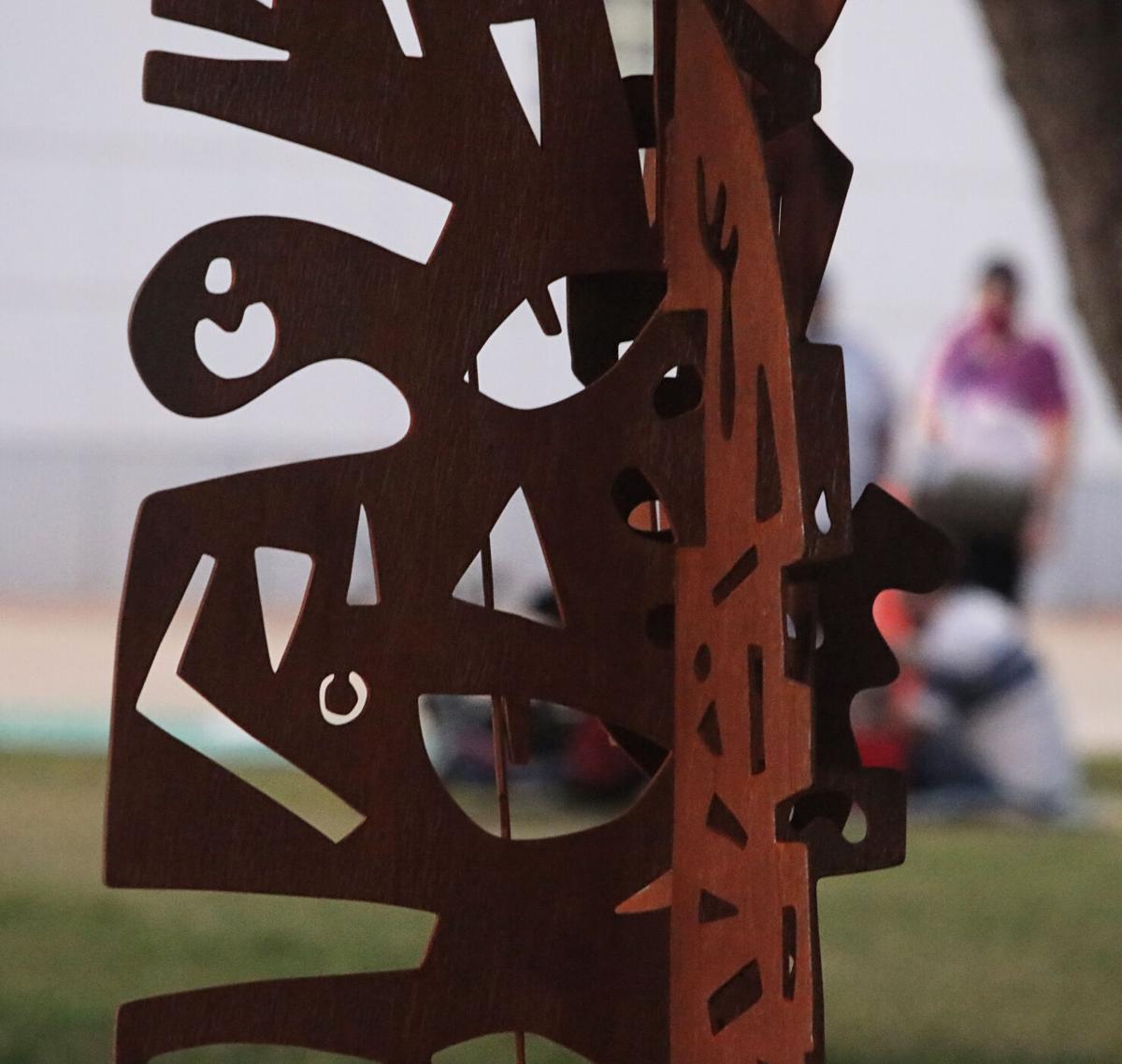 "Totem: Desert Flower" by Joan Waters stands in the sculpture garden at the Tucson Jewish Community Center. It is one of nine sculptures that have been recently added to the garden.