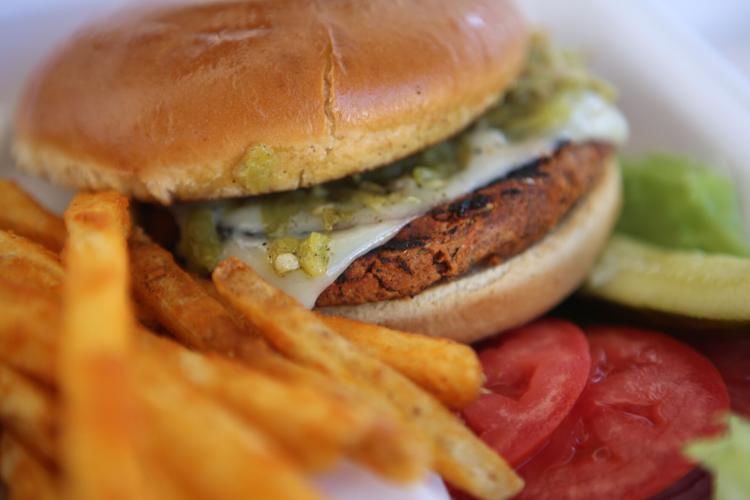 Pictured is the tepary bean burger at Ajo Farmers Market and Cafe. 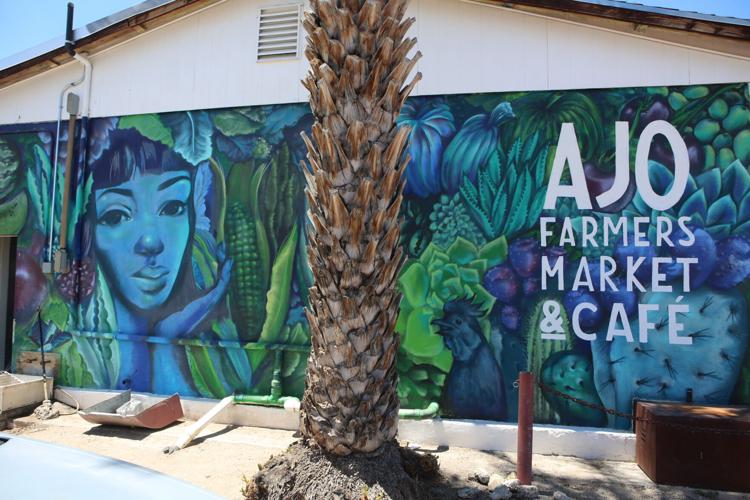 Ajo Farmers Market and Cafe is located at 100 W. Estrella Ave. in Ajo. 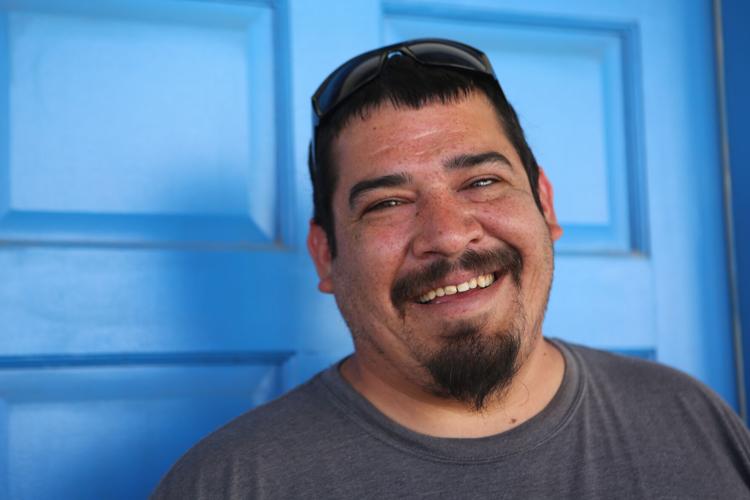 Cody Manuel is the kitchen manager and chef of the Ajo CSA Farmers Market and Cafe. 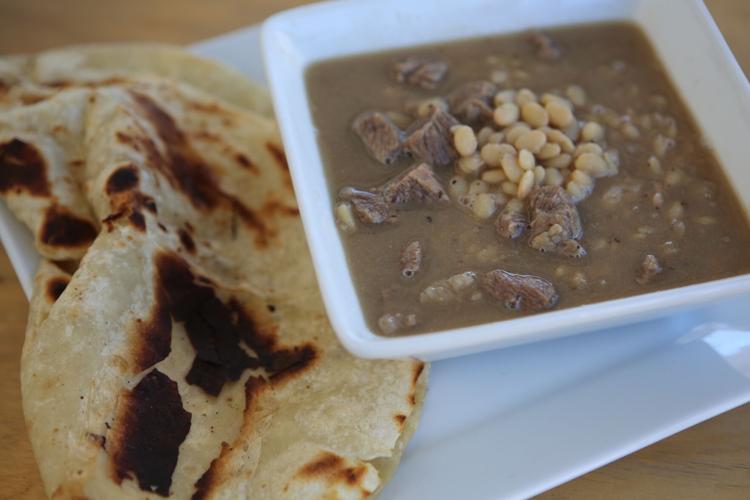 Pictured is the white tepary bean and short rib stew at Ajo Farmers Market and Cafe. 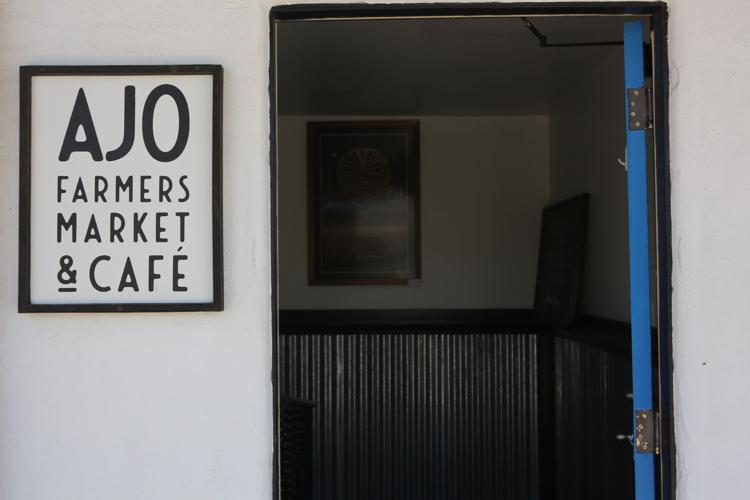 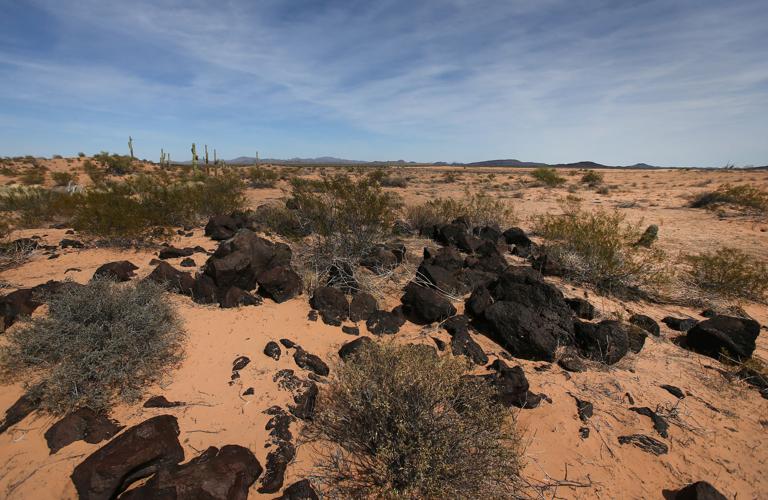 The Sonoran desert landscape consists of volcanic rock and fine sand at points along El Camino del Diablo on the Cabeza Prieta National Wildlife Refuge southwest of Ajo, Ariz., in 2016.

Ajo is the most western city in Pima County. It’s on the other side of the Tucson Mountains and the Sierritas. It’s past the Tohono O’odham Reservation, and their sacred peak Waw Kiwulik in the Baboquivari Wilderness.

Coming south from Interstate 8, drivers know they’re getting close to Ajo when they pass through red rock outcroppings, like Sedona a couple million years behind schedule. These formations are where Ajo churches perform sunrise services. Depending on who you ask, “Ajo” refers to the O’odham word for red rocks, or the Spanish word for the wild garlic that grows here.

A local artisan market announces Ajo as a place of convergence. The warehouse is named Three Nations: here, the O’odham, Mexican and American meet.

The city is home to the nonprofit Ajo Center for Sustainable Agriculture (CSA) and its food pantry, gardeners network, farmers training program and farmers market and cafe. The cafe is a leader in Pima County dining, using heritage, Indigenous ingredients from farm to table.

This is the place that raised Cody Manuel, the kitchen manager and chef of the Ajo Farmers Market and Cafe. He recognizes most of the locals who come in; he calls everyone “dear.”

Cody’s grandfather, who is Pima River Akimel O’odham, dug the first well in nearby Why. Cody grew up learning in the Ajo school systems before eventually teaching there himself, as a Le Cordon Bleu-educated culinary instructor. At 34, he has spent half his life in kitchens.

“I taught at the same school my sixth-grade teacher worked at,” he said. “She happened to be the woman who was just in front of you in line,” he told me.

With a $25 voucher, she purchased staples like butter alongside heritage ingredients like tepary beans. Ajo CSA has been giving out these vouchers since February along with emergency food boxes for the community.

The Ajo Farmers Market is not what some might picture: there aren’t any vendors peddling expensive local leafy greens. It’s not quaint, though it is beautiful. It’s a fridge stocked with the essentials: butter, milk, tomatoes, onions, jalapeños — often delivered in trucks by distributor U.S. Foods — next to shelves of dried goods, like heritage corn pinole and white and brown tepary beans. If they have enough stock, you might find wild-harvested ciolim (cholla buds) or other seasonal desert foods. “These are what grow locally,” Cody said.

Tepary beans grow near Ajo and on the reservation in plots called dry fields. Dammed on all sides, the field conserves the water from monsoon rains. The field will flood (farmers keep a close eye to watch for dam breakage), and, with nowhere else to go, the water slowly soaks into the earth, nourishing the beans. The O’odham have cultivated these beans since ancient times. They are among the most drought- and heat-resistant crops in the world.

The farmers market also partners with Indigenous groups like Ramona Farms and Blue Corn Custom Designs to stock their dried goods shelves. The CSA teaches people how to pick and preserve ciolim, and then buys the dried buds from foragers for $30/pound.

Cody then uses these heritage ingredients in his menu. “It feels like coming full circle,” he said.

Cody grew up watching his white mom learn the customs of his dad’s Akimel O’odham family. “She took up the traditions,” Cody said, “She’d be out, over the fire making chumuth.” She ended up managing a school cafeteria on the reservation, which inspired Cody to pursue his love of cooking, too. Ajo CSA values heritage foods and has encouraged Cody to reconnect with his roots.

The standout menu item is white tepary bean and short rib stew. White tepary beans have a milder flavor than the brown, which are called earthy. They’re small, like a long pea, but with a firmer, less mealy texture. Tepary beans are superfoods, high in protein and the soluble fiber that helps your system process high-glycemic, sugary foods.

“These are good, simple ingredients, so I only used light seasoning,” Cody said. This does not mean the dish is bland, but rather, the dish evokes its ingredients. The beef is aromatic and adds a little fattiness to the lean beans, which absorb all that flavor.

Cody knows he can keep it simple from the quality of his ingredients alone. It tastes of the place it was grown, the minerals in the earth and the monsoon rains.

I also tried the tepary bean burger, which is a tangier, earthier and all around more flavorful cousin of a black bean burger. It’s topped with farm-fresh Hatch green chiles, secured at the harvest from the CSA’s interns, who visited an Indigenous farmer outside of Hatch, New Mexico, during chile pepper season. They brought burlap sacks home filled with the harvest, and immediately froze them to lock in the fresh flavor. Cody julienned the chiles and added them to an aioli that adds punchiness to the burger. The fries are perfectly crispy, too, with that custardy middle.

They also offer blue corn mush, made with heritage corn, burritos and quesadillas with tepary beans in them, and ha:l (squash) bisque.

Ajo Cafe’s menu has changed over the past few years. When COVID began, the cafe streamlined to serve the food-insecure in their community. “During the pandemic, it was about, how do we help the community through a crisis?” Cody said.

Together, the groups distributed emergency food boxes to community members facing food insecurity. They restructured the cafe menu to the most stable ingredients (seasonal foods that needed to be harvested from the desert, like prickly pear and ciolim, were cut), and combined their century-old venue in downtown Ajo with the Ajo Food Pantry.

Though menu items like ciolim pico de gallo were removed in the process, Cody cares about incorporating local, heritage ingredients into his community’s diets. In Ajo CSA’s monthly newsletter, he’ll include a recipe using Indigenous foods like ha:l. “The taco salad with cholla bud pico was a big hit,” he said. “ I associate ciolim with an artichoke, a woody kind of taste. The fresh, green flavor soaks up the flavors you cook it with; I added lemon to kick it up a notch.”

This month, the recipe is for a ga’ivsa (roasted, ground corn) parfait, with a base of yogurt and oats, or pilkan (wheat berries).

In February, they launched a voucher program for their community, so people picking up emergency food boxes could also get $25 worth of heritage foods from the farmers market or receive a meal from the cafe. Last week they broke a record, selling over $2,200 of food in one day.

The vouchers are paid for with grants the CSA applies for, and partnerships with businesses like Desert Diamond Casino. Last month, vouchers went toward two-thirds of the meals served at the cafe.

One item Cody dreams of featuring on the menu are chumuth, in the style he was raised with: cooked on a tilling wheel, covered with a domed grill, over a mesquite fire. “We’d love to have them on the menu, but people can’t make them in the quantities we need,” he said. “They take an incredible amount of work, and we go through dozens of tortillas a day.”

Instead, he sources them from La Sonorense out of Phoenix. They’re good, with big, irregular char marks and perfectly chewy consistency. “It’s important that we have mom-and-pop style tortillas,” he said.

At home, Cody’s kids will ask for chumuth without understanding how much work goes into them. “They don’t realize how much effort goes into chumuth; that means sending dad out to cut firewood,” he said.

On his property, in the desert outside of Why, he can find the mesquite to cook the chumuth.

While the cafe is takeout only for the time being, they have a charming, shady patio for your dining convenience.

Tucson desert foods — including prickly pear and saguaro fruit, mesquite and palo verde pods and cholla buds — have long been gathered and eaten by Indigenous communities such as the Tohono O'odham and Pascua Yaqui.

Heritage foods can feel obscure, but at Mission Garden, they are unpretentious — self-evidently Tucson. What started as an article about seasonal produce in Tucson turned into a love letter for our city.

Prickly pear season is coming up. Here's what to do with the fruit you may have in your yard

It's almost prickly pear harvesting season in Tucson. We talk to two experts for tips on harvesting the fruit, preparing it and cooking with it. Prickly pear margaritas, here we come.