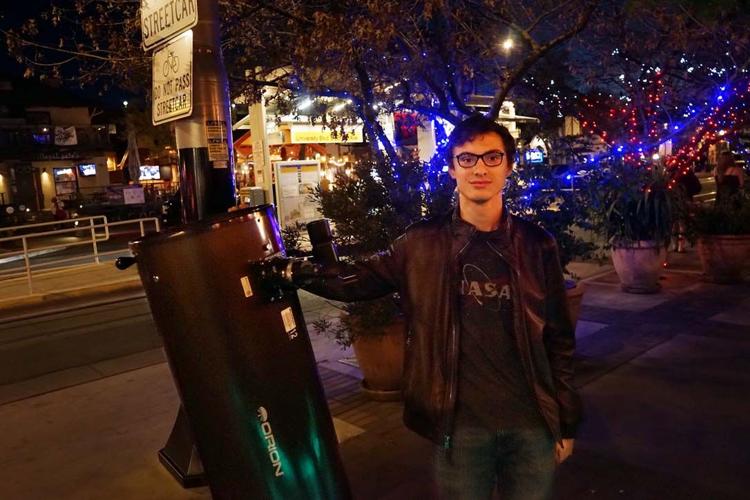 Zane Landers, 19, has shared his love of astronomy on city sidewalks with more than 4,000 people since January. 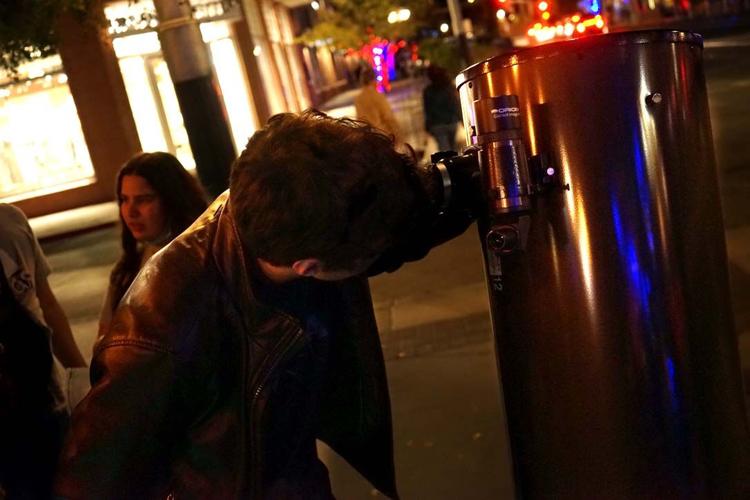 Zane Landers sets up his telescope on busy sidewalks 10-12 days per month.

Gazing upward at the sky, Zane Landers smiles as he explains the benefits of space exploration.

He has propped his homemade telescope on the University Boulevard sidewalk in front of Gentle Ben’s, enticing passersby to view the craters of the moon. Landers, 19, has shared his love of astronomy on city sidewalks with more than 4,000 people since January.

“I think that if we don’t convince people of how valuable space is, how valuable the innovations that come from astronomy and space exploration are, then eventually the wrong people are going to be in charge and completely kill it,” Landers said.

On evenings when the night sky is easily visible, he sets up his telescope on busy street corners like University Boulevard and Tyndall Avenue to interact with as many people as possible. He uses a ticker counter to track the number of people exposed to space.

Landers sets up his telescope 10 to 12 days per month, going out on nights when celestial objects are easily visible. He plans on expanding this concept, which he calls Arizona Sidewalk Astronomers, seeking to have additional people operating telescopes to cover more of the downtown area and draw in a greater number of people.

Unexpectedly, some people have been so thankful they started tipping him, bringing in about $25 on an average night.

“I just decided, ‘Hey, I’ll just take tips and at least make my parking money back,’” Landers said. “And it turns out, people are pretty supportive.”

Building a telescope of his own

Landers is no stranger to the field of astronomy — he even holds the title for the top post of all time on r/space, the most popular post ever in an online Reddit community home to over 20 million users. With over 215,000 upvotes, 5,000 comments and 192 Reddit awards, the post includes an image of Landers beside a 14.7-inch diameter Newtonian reflector telescope that he built by himself at the age of 17.

His interest in astronomy began during his middle school years in Connecticut when he became curious about outer space after playing the video game “Kerbal Space Program.” Soon after, a friend told him to watch the Orion EFT-1 rocket launch, which interested him even more.

As a teen, Landers decided that if he wanted to continue his exploration of astronomy, he was going to need his own telescope. His parents bought him a small computerized scope, but he found it difficult to view the stars in the way he wanted.

Inspired by the ideals of the late amateur astronomer John Dobson, pioneer of the Dobsonian telescope, Landers took matters into his own hands and learned how to craft a telescope of his own.

“I found out about this guy John Dobson, who had this hour-long YouTube video about grinding a mirror out of a porthole, and I was like, ‘Wait, he invented those telescopes,’” Landers said. “And I was like, ‘Well this looks pretty easy, why does no one else do it?’”

Landers has since constructed 15 telescopes of various sizes and even won a First Place Junior Mechanical Award at the 2018 Stellafane Telescope Competition, in which amateur telescope makers gather from around the country to show off their homemade telescopes for a community of like-minded astronomy enthusiasts. Landers won the first-place prize for a 6-inch Newtonian telescope that he created.

Bringing the stars to the sidewalk

Oregon resident Melvin Bartels, craftsman of large ultralight telescopes and a mentor to Landers, is excited about Landers’ passion for sidewalk astronomy.

“I’m not sure that anyone can stop him,” Bartels said. “He’s pretty driven to do this.”

“We live in a dynamical universe, where events from space can have a strong impact on the physics of our own planet,” Wagner said via email. “Space awareness is crucial for our own survival, and more fundamentally to understand our context in the universe.”

Wagner also offered some advice to Landers on how to improve his strategies of public engagement in astronomy.

“I think it would be useful to bring an iPad to help those who aren’t currently observing to get an idea of what’s going on,” Wagner said. “The iPad could show a Hubble image of whatever the telescope is pointed at, which could be used as a starting point to talk about what people are actually looking at, and generally help to maintain crowd engagement.”

Landers plans to keep expanding Arizona Sidewalk Astronomers, which he currently manages with two of his friends. A master’s degree in science communication would help him create online content to help people become more interested in STEM fields.

“If you have an idea that you think is good and worth pursuing,” Landers said, “Go and do it, even if everyone tells you it’s really stupid. Because if it is really stupid, you’ll figure that out.”

To find out where Arizona Sidewalk Astronomers will be next, keep up with them on Instagram.

This Tucson nonprofit aims to help those in need through astronomy 💫

Tucson nonprofit Reach For The Stars is led by two combat veterans who tackle mental health education, homelessness and other hardships through a passion of their own: astronomy.

The Tucson-area Reina Prom Giveaway happened thanks to Selina Barajas of Mi Reina Mobile Boutique, among other local businesses. All 30 high school applicants receive formal gowns and many also will have facials, makeup, hairstyles and manicures for their special queen day, organizers say.

The four-day Tucson festival celebrates the heritage and culture of agave. Check out the Agave Heritage Festival 2022 from April 28 to May 1.

‘Rainbows and smiley faces’: This UA student is working on her third clothing collection

University of Arizona student Julia Gray started clothing brand The Be Good Collection, "young and trendy with happy vibes," in 2020.

Searching for a summer camp? Here's a list of more than 100 of them

Summer is fast approaching. Searching for a 2022 summer camp for your child or teen? Check out our #ThisIsTucson Summer Camp Guide for more than 100 camps, mostly in the Tucson area!