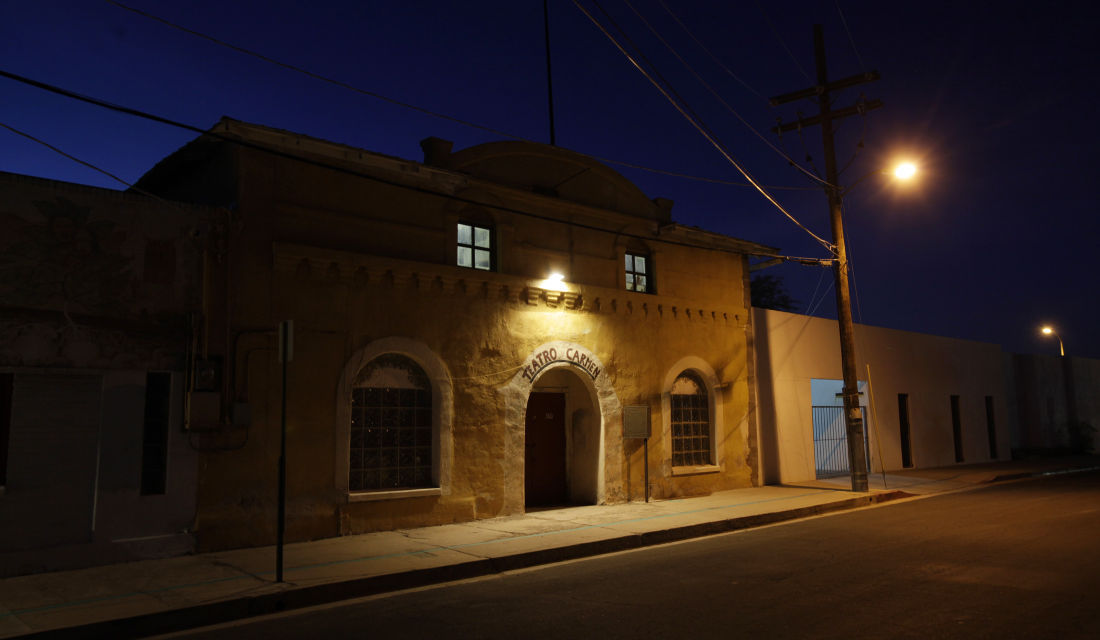 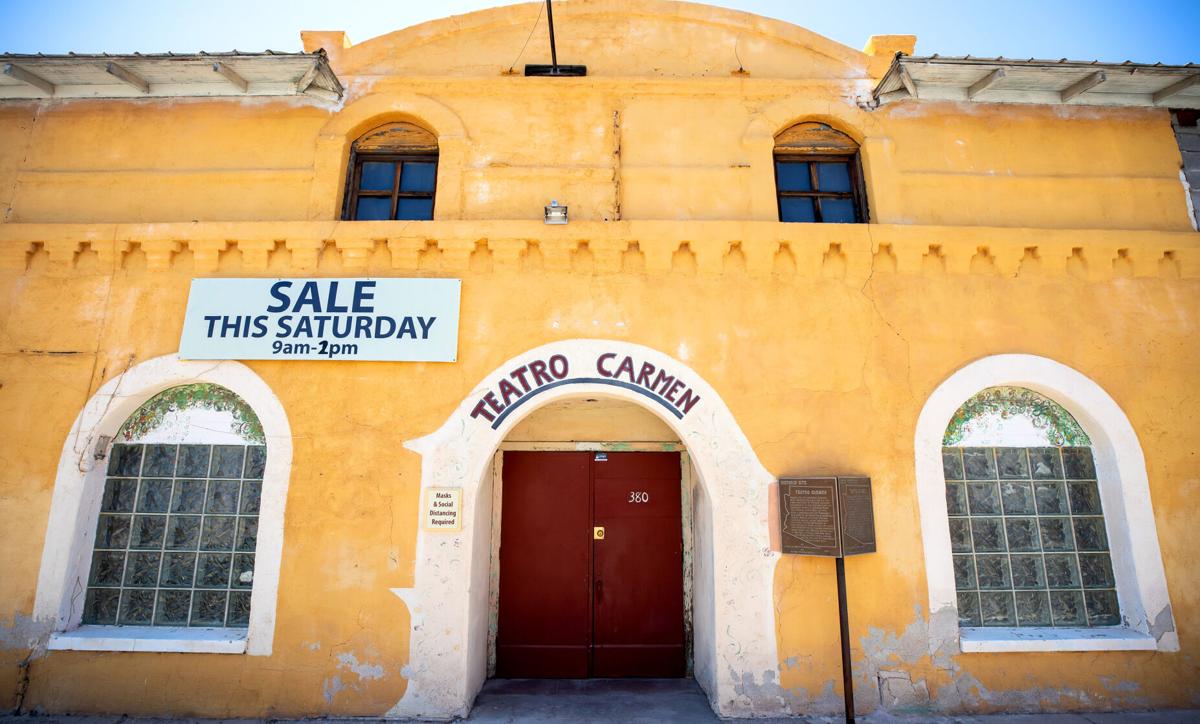 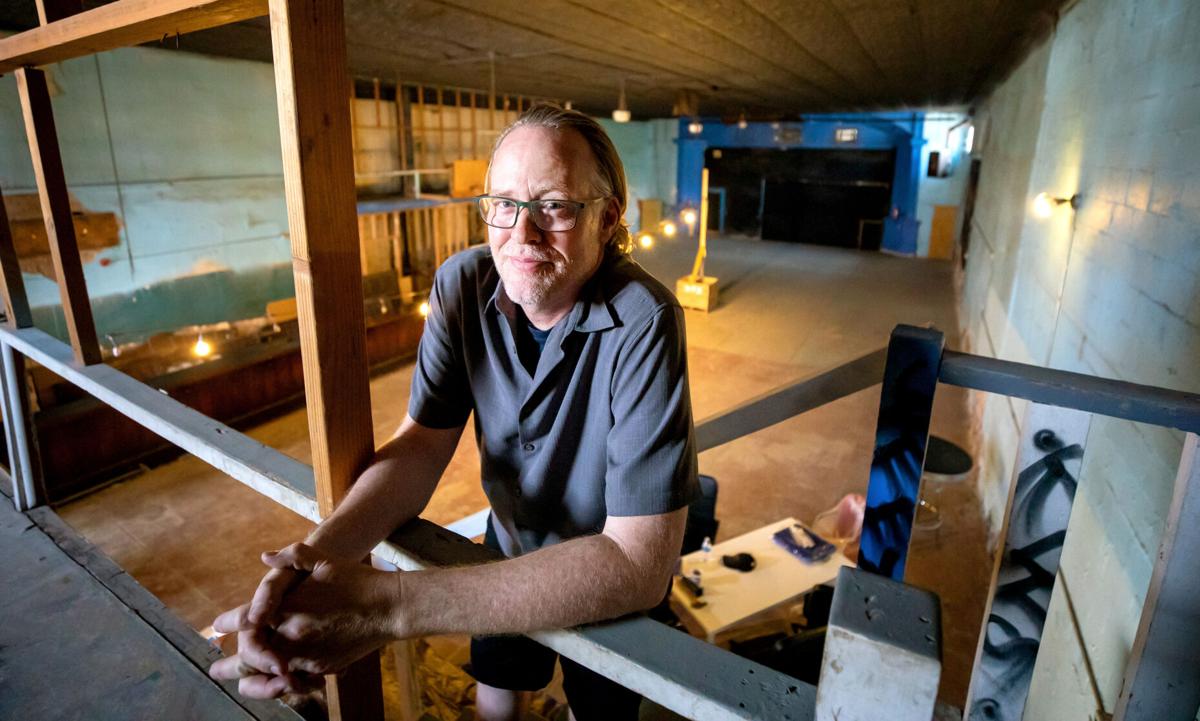 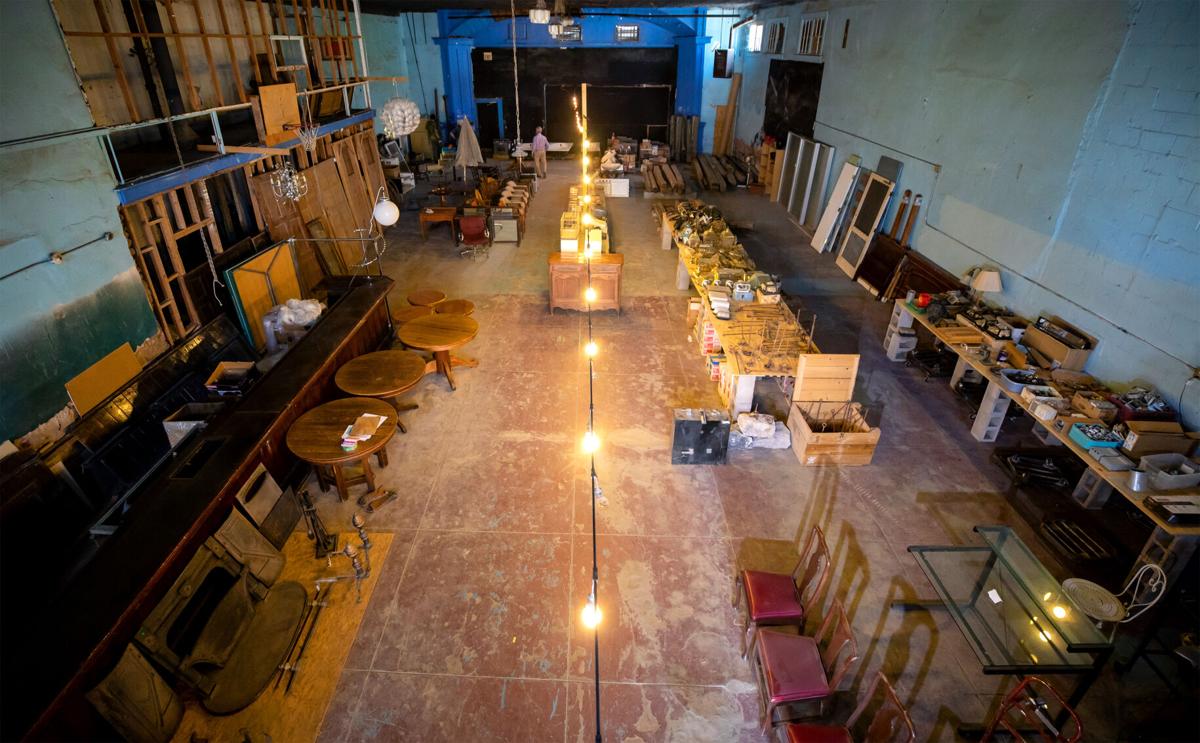 Antique tables, fireplaces, lights and furniture are photographed inside the Teatro Carmen, 380 S. Meyer Ave., in Tucson, May 12, 2021 ahead of a sale to clear out items the Rollings family has collected over the years before the building is sold.

Stratford Art Works, Inc., has purchased the 106-year-old Teatro Carmen in downtown Tucson with plans to resurrect it as an active community arts and cultural space.

The local nonprofit organization bought the property at 380 S. Meyer Ave. in Barrio Viejo from Bacon Industries, Inc., on June 10 for $940,000, according to public records.

Herb Stratford, president of Stratford Art Works, said the theater, which he estimates will seat about 300, will fill a need in the downtown area.

“The Temple of Music and Art’s Cabaret Theatre is less than 100 and Leo Rich is close to 600,” said Stratford, who has spearheaded several projects in Tucson over the last 25 years, including the restoration of the Fox Tucson Theatre. “At 300 capacity, we are in a sweet spot. It can be really flexible for theater, dance, music, film, quinceañeras. Whatever needs to happen in that building can happen in that building.”

Commissioned by Carmen Soto Vásquez in 1914, Teatro Carmen operated as a venue starting in 1915 and was created to showcase theatrical works from Spain and Latin America, according to Star archives.

It launched in May of 1915, with the comedy “Cerebro y Corazón,” by Mexican playwright Teresa Farías de Isasi.

In 1920, it hosted the first showing of Verdi’s “Aida” in the city, performed by the Sonora Opera Company.

An article in the Star reviewing the performance said the cast “sang their various roles with splendid feeling and brilliant finish.”

The venue was sold in 1926 and since that time, has been many things, including an auto garage, a space for Borderlands Theater and most recently a workshop and storage warehouse.

“It has this incredible history of Hispanic heritage, African American heritage,” Stratford said. “It is very unique.”

Led by patriarch Kelley Rollings, the Rollings family started purchasing and preserving properties in Barrio Viejo in 1971 as a way to save them from urban renewal.

They had been using Teatro Carmen for storage of architectural salvage, much of which they sold in an estate sale in May.

Donald Rollings said they felt Stratford was the right man to restore the space.

“He demonstrated an interest and ability to do that kind of work,” Rollings said. “He had past experience with the Fox, experience working with the city. We wanted someone who had the understanding of what was required.”

Stratford said a lot of work needs to be done to the 8,700 square feet of space to get the venue back on its feet.

The project will require a near-complete restoration of the building, including the construction of a new stage and fly loft.

The adjoining building next door will be converted into a bar and restaurant with a patio area on the corner of South Meyer Avenue and West Simpson Street.

“I’d like to see the restaurant open all the time, not just before and after shows,” Stratford said.

Stratford said Teatro Carmen will book its own shows, as well as rent out the space for concerts and community events.

He also hopes to hold film screenings there as part of his annual Film Fest Tucson.

“It will be cool for artists to play in a place like this, that lives and breathes Tucson history,” Stratford said. “Its size gives us the flexibility to be creative with the programming.”

Stratford is also on the hunt for photos, flyers, recordings, oral histories or any item that may have come out of the building during its 106-year-old history.

Despite its history there isn’t a lot of historical record on the building, he says.

“Because this was the barrio, there was a lot less photo documentation,” Stratford said. “The things we have found have not been from the Star or the Citizen because they didn’t cover this part of town as often. I am hoping someone out there has an archive.”

Have a piece of Teatro Carmen history? Reach out to Rikki Lynn Riojas at rikkiriojas@email.arizona.edu.

Woolly Fern is one of only a handful of oddities shops in the state.

Hundreds of movies have been filmed in Tucson, Arizona throughout the years. The many films have starred actors such as Patrick Dempsey, Gene Wilder, Kevin Costner, Whoopi Goldberg and Drew Barrymore.

Things to do this weekend, July 14-18, in Tucson, Arizona including food, summer markets, night events and more. Events include Tucson KidsFest, a drive-in showing of "Hook" and live music options.

I Am You 360’s latest initiative, the Small Home Experience, will give Arizona youth ages 18-22, who have either aged out of foster care or are experiencing homelessness a safe place to live.

Louis Carlos Bernal captured the culture of barrio life in the Southwest in his photos. The University of Arizona’s Center for Creative Photography in Tucson received a $255,000 grant from the Henry Luce Foundation that will fund a substantial exhibition in fall 2023 of Bernal’s work.

Lady Haha Open Mic for Women & LGBTQ+ gives women and queer comedians a stage where they can safely be themselves. The next two comedy shows are set to take place at Tucson's 191 Toole later in October 2021.