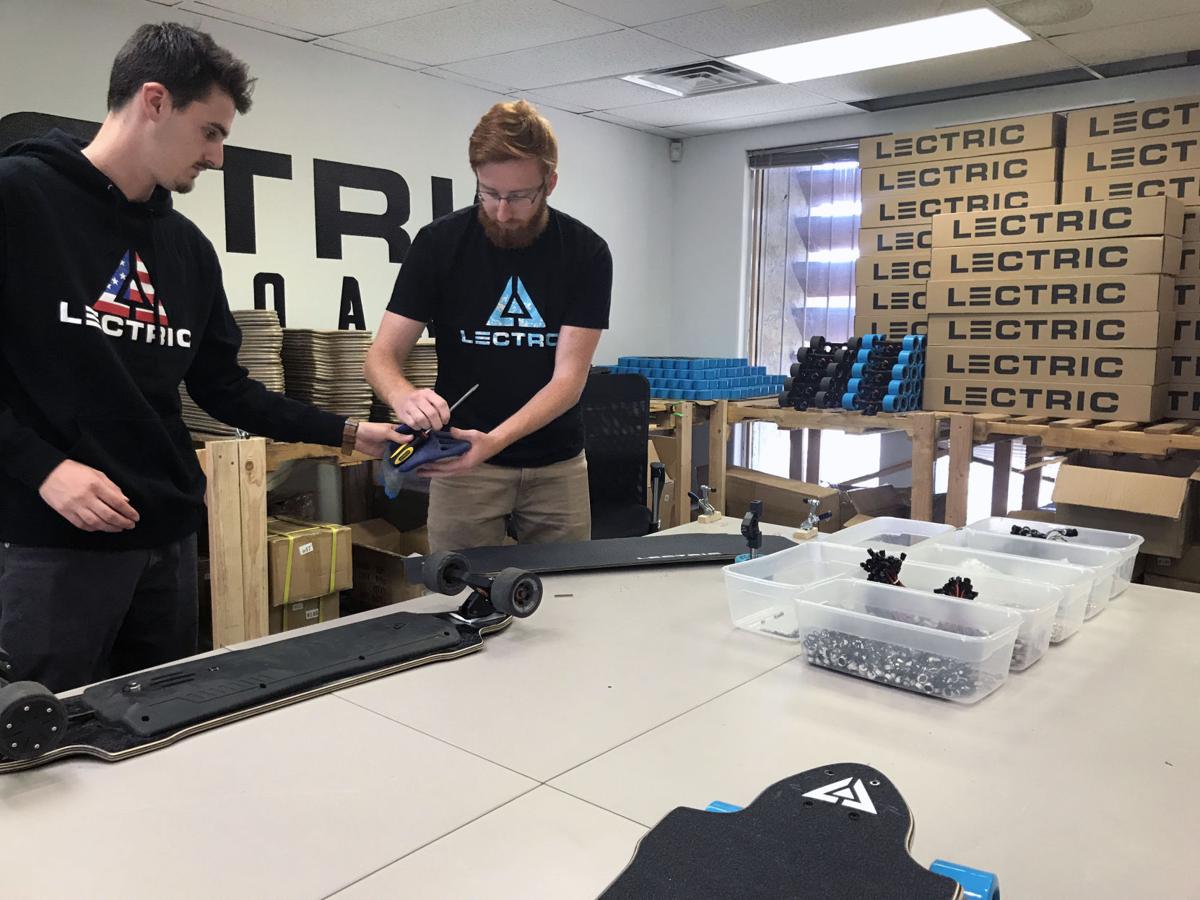 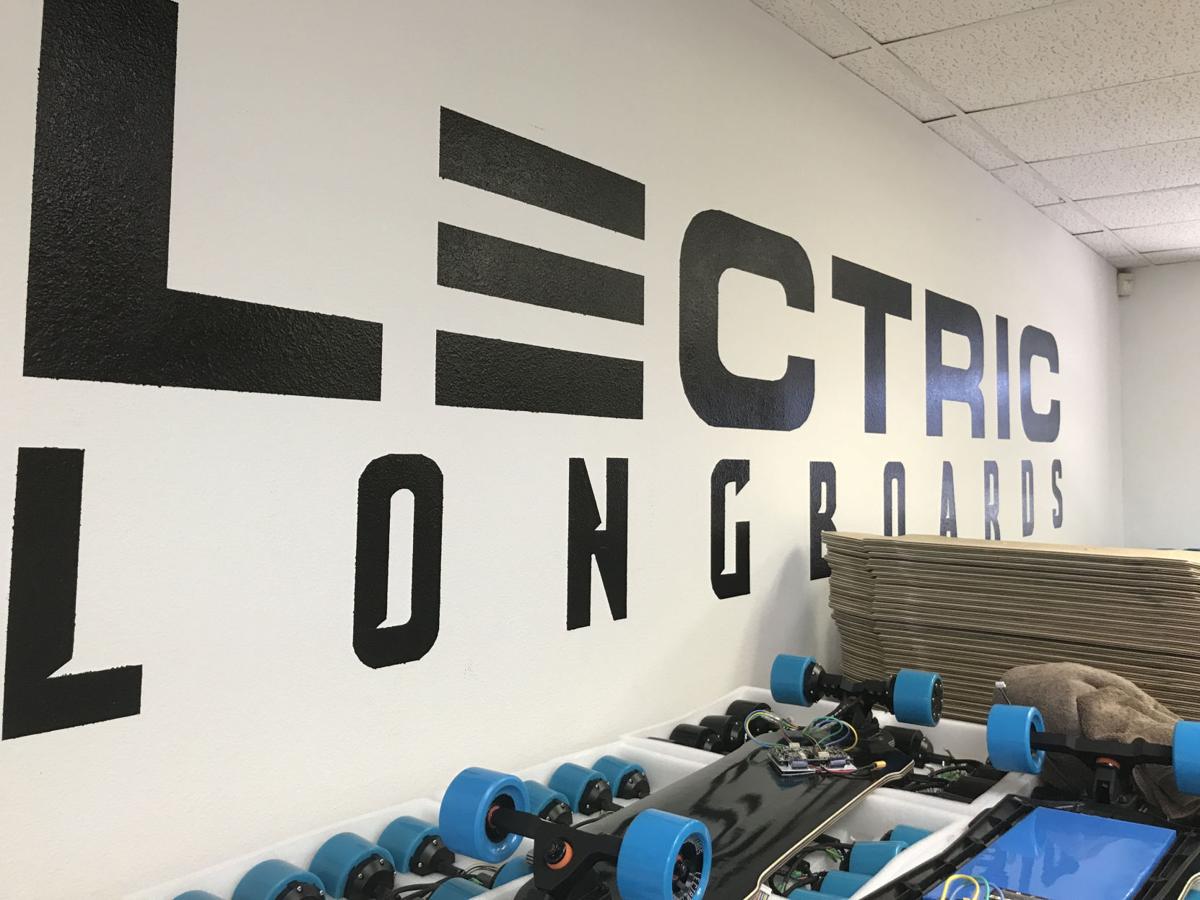 The Lectric Longboards warehouse is near the Grand Canyon University campus. 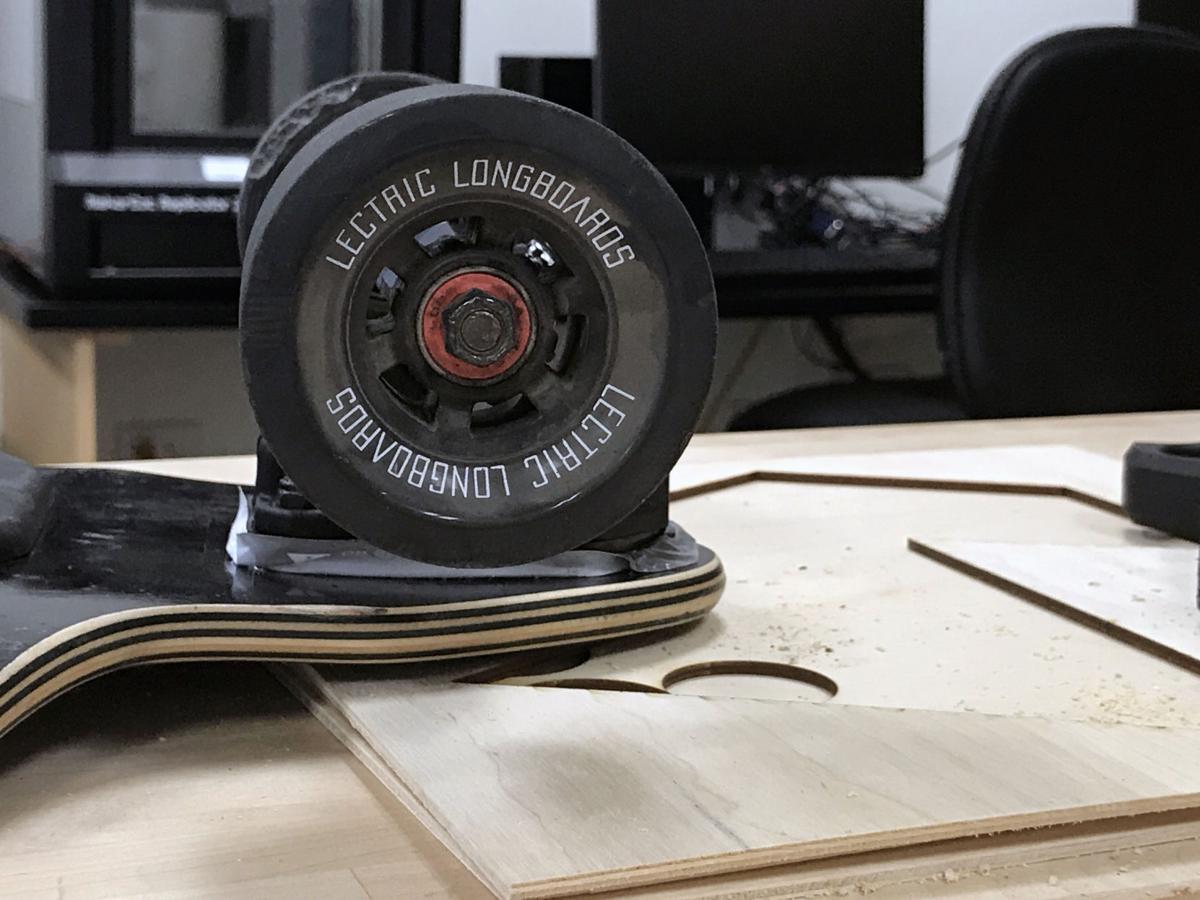 Lectric Longboards is a small startup company that focuses on speed and creating a community of riders.

PHOENIX – Levi Conlow and Nathan Cooper have been “boarding” all their lives — skateboarding, wakeboarding and snowboarding.

The pair met at a Minnesota mixer before college, but when they reconnected in a dormitory hall at Grand Canyon University, they realized their passion for boarding could make a great business.

They launched Lectric Longboards in 2016, and the company already has sold more than 1,500 of the motorized devices. The startup continues to grow and has generated about $700,000 in sales, according to an email from a GCU spokeswoman.

Conlow, 21, and Nathan Cooper, 20, said the price and speed of their boards sets their product apart in the growing industry.

“We focus on what’s important to us, which is speed, range and price,” said Conlow, the company’s CEO and an entrepreneurial studies graduate student.

Prices for electric longboards can range between $150 to $1,600 on Amazon.com. Lectric Longboards is selling its two models on preorder for $299 and $429, according to its website.

Cooper and Conlow said they have kept the cost low by employing student workers to help assemble the boards.

They said their goal isn’t necessarily to make huge profits, but they want to make the boards more accessible so more people can join the boarding community. Conlow said he has been boarding since childhood.

“I really wanted to own my own skate shop,” he said. “And then reality started to come through.”

Conlow said he realized many skate shops struggle financially, and he would need to pick a more reliable career path.

“It was a bummer because I realized I would have to work in a cubicle,” Conlow said.

The idea for the business came to Conlow during a class that brought together students from various majors, such as business and engineering, and challenged the students to work together.

The pals transferred their idea to the Lopes Lab, an incubator that helps students start businesses. They eventually joined an entrepreneurial competition at GCU, which they lost.

“We were really sour about it,” Conlow said. “I sent Nathan a text the moment after I found out we got eliminated from the competition, and I said, ‘The best revenge is success.’ At that moment, it was like, let’s launch a real business.”

At that point, Conlow and Cooper made boards in their dorm room and sold them on Craigslist. Conlow said they began spending about 85 hours a week in the lab perfecting the product.

They decided to use hub motors, and placed two on the board.

“Hub motors are more efficient, more powerful,” said Cooper, a marketing major. “We saw the technology emerge and basically went out, grabbed it and capitalized on it.”

According to the Lectric Longboards’ website, because the motors are inside the board, they are less noisy and require little maintenance.

There are many electric longboards on the market. Some boards can reach speeds of up to 26 mph and can carry the rider for about 7 to 16 miles without having to recharge the battery.

The company’s more expensive board, the Lectric LS, has a maximum speed of 26 mph and can travel up to 18 miles without recharging, according to the company’s website.

“(The board) is just wicked fast. The performance of this board beats just about all other companies in speed,” Conlow said. “So to be able to beat them in the true key performance areas, and then in addition be half to one-third of the price, it’s a huge win for us.”

Lectric Longboards’ next goal is to push the limits on speed.

“We would like to be the fastest in the market,” Cooper said. “I want to go 61 mph because the land speed record for an electric longboard at this point is 60. I want to beat the record, but obviously not sell it to the public.”

In addition to creating a community for riders, the pair believes in conscious capitalism, the idea of using the business to enrich the lives of others.

Conlow and Cooper plan to give back to the skateboarding community this holiday season by using scrap wood from campus construction sites and turning it into skateboards. They will give the boards to foster children at Big Brothers Big Sisters of America.

“By doing good, by keeping the focus on the customer and the community, the sales and the rest of that, that just comes after,” Conlow said.

The Ideas to Doors conference will be at the Fox Theater Sept. 15

The Lectric Longboards warehouse is near the Grand Canyon University campus.

Lectric Longboards is a small startup company that focuses on speed and creating a community of riders.