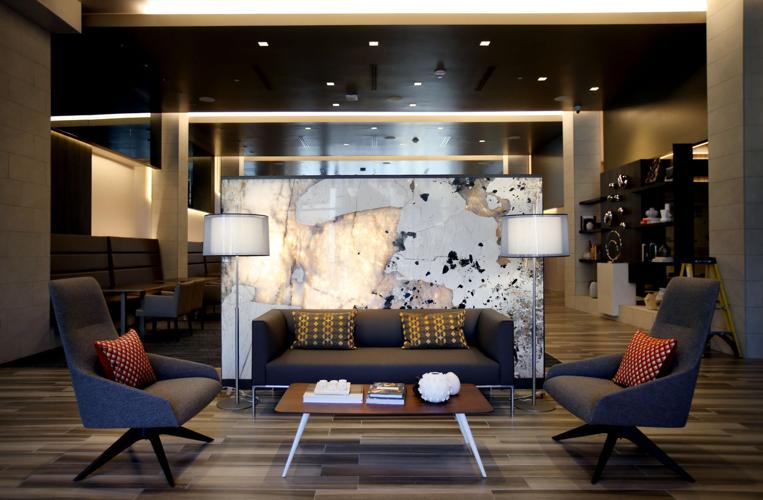 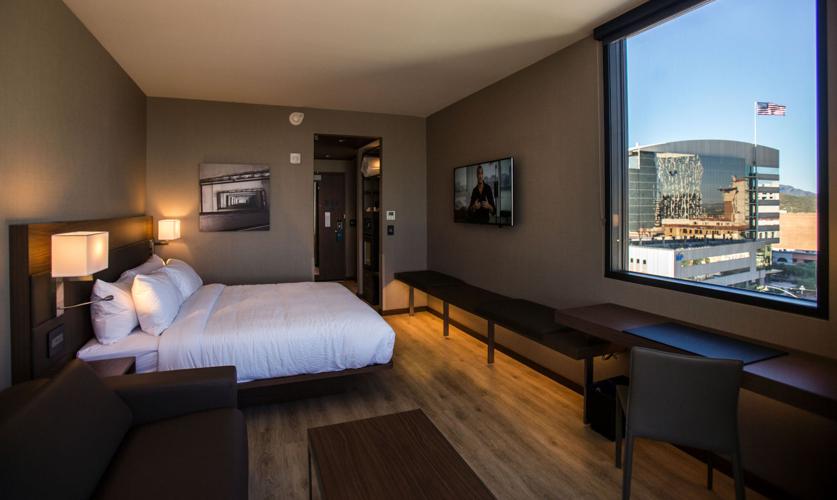 A standard eighth-floor room with king bed at the AC Marriott, 151 E. Broadway. The 136-room hotel features three floors of rooms, six suites and a pool deck with downtown views. 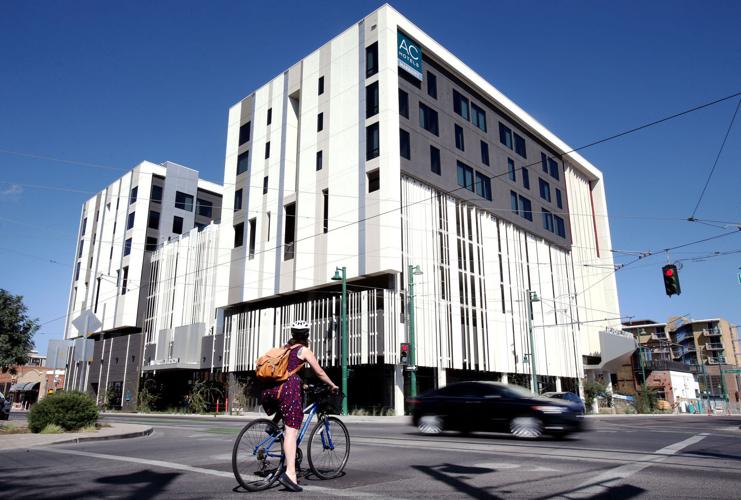 Rooms are on the top three floors. Tucson was selected as one of the first U.S. cities to get an AC Marriott.

The hotel hosts its first guests Thursday, Sept. 21, at the property on Broadway near Fifth Avenue.

The eight-story building includes 136 hotel rooms, a sixth-floor pool deck with downtown views, a lobby bar, fitness center, and 1,500 square feet of meeting space that accommodates up to 100 people. The lobby also has a spa operated locally by Kaelen Johnson.

Construction began in December of 2015 with many local partners, including Rio Nuevo, the city of Tucson, Lloyd Construction, the Bank of Tucson, FORS Architecture + Interiors, Swaim Associates and Cima Enterprises.

Developer Scott Stiteler spent the past few nights at the hotel as 55 employees went through Marriott’s training program.

“I kept waking up, thinking, am I really here?” he said. “It’s still sinking in.”

Stiteler and his partners Rudy Dabdoub and Paul Chellgren were impressed with the level of support they received as the development was underway.

“There are so many hurdles, surprises and roadblocks along the way, but there was always someone who was able to get us to the next step,” Stiteler said. “It was like we had a guardian angel.”

The AC Hotel is one of Marriott’s fastest-growing brands. It began as a line of independent boutique hotels in Spain before expanding to the United States. Tucson was selected as one of the first U.S. cities for the brand, along with Miami, New Orleans and Chicago.

“The design was inspired by the the classic modern aesthetic and Spanish roots of the AC Hotel, as well as regional influences from Tucson’s history and the Arizona ‘Five Cs’: copper, cattle, climate, cotton, and citrus,” architect and owner, Sonya Sotinsky said.

Red accents in the lobby and pool area are a nod to the Arizona Wildcats, Stiteler said.

Above the ground-floor lobby are four floors of parking with 200 spots. Rooms are on the top three floors.

The hotel, 151 E. Broadway, is the first one built downtown Tucson in four decades.

“For us at Visit Tucson, the first new hotel downtown since the 1970’s is great news on its own,” said Brent DeRaad, President and CEO. “Even better, it’s a property from a trusted brand in Marriott. We’re looking forward to full occupancies and satisfied visitors well into the future.”

The hotel will offer continental breakfast, snacks and evening tapas in the lobby, but it does not have a restaurant, as Marriott puts AC brands in dense, urban settings.

“The idea is being in the middle of an entertainment district,” Stiteler said. “We want guests to go out and explore what’s around them.”

The AC Hotel Tucson Downtown will offer specials for locals during the opening months. For details and booking, guests can make a walk-in reservation or call the hotel directly at 385-7111. The new property will be listed on the Marriott.com website Sept. 22.

$25K up for grabs in small biz, startup pitch contest

The apartments will be available for rent month-to-month.

Investing in stocks: Tips for getting started

Investing in stocks: Tips for getting started

Invest smart: Protect yourself against fraud

Invest smart: Protect yourself against fraud

A standard eighth-floor room with king bed at the AC Marriott, 151 E. Broadway. The 136-room hotel features three floors of rooms, six suites and a pool deck with downtown views.

Rooms are on the top three floors. Tucson was selected as one of the first U.S. cities to get an AC Marriott.