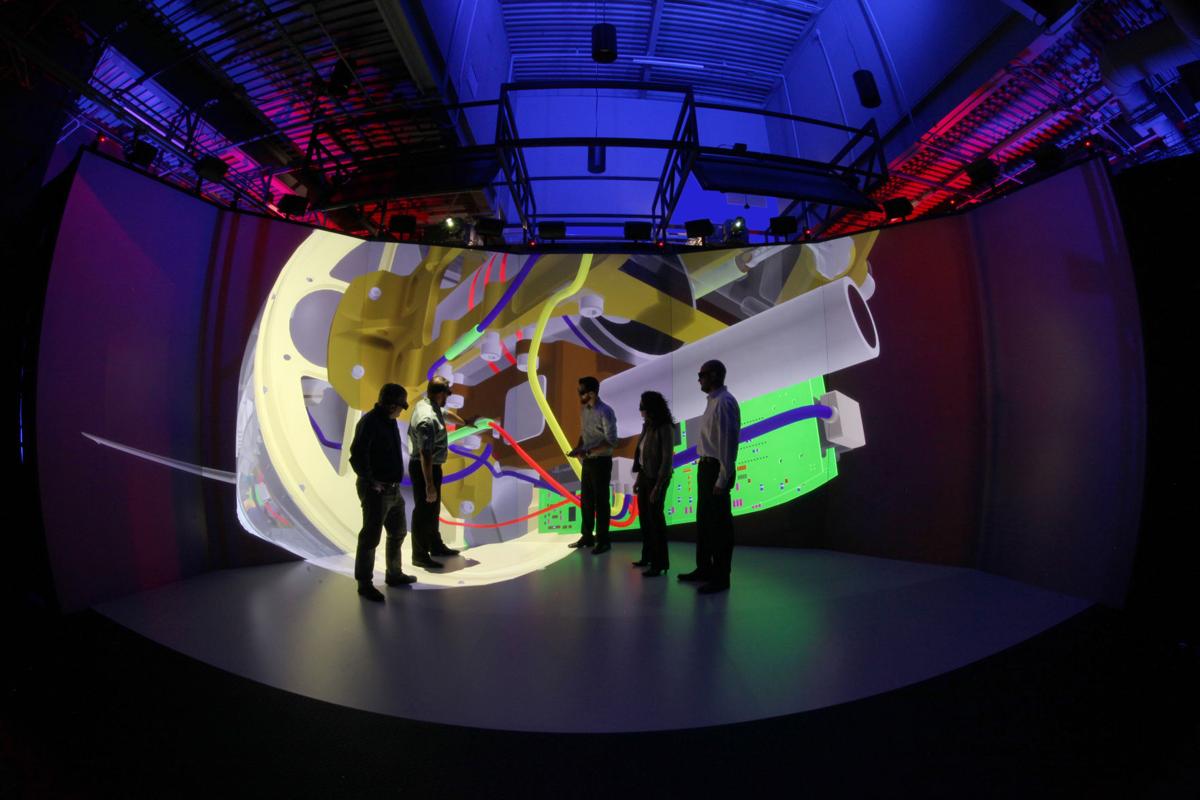 At Raytheon Missile Systems, engineers and other workers fitted with 3-D glasses get a close-up look at the innards of a missile, with electronics and mechanics laid out to exact scale. The dynamic visual allows assemblers to spot potential problems early. 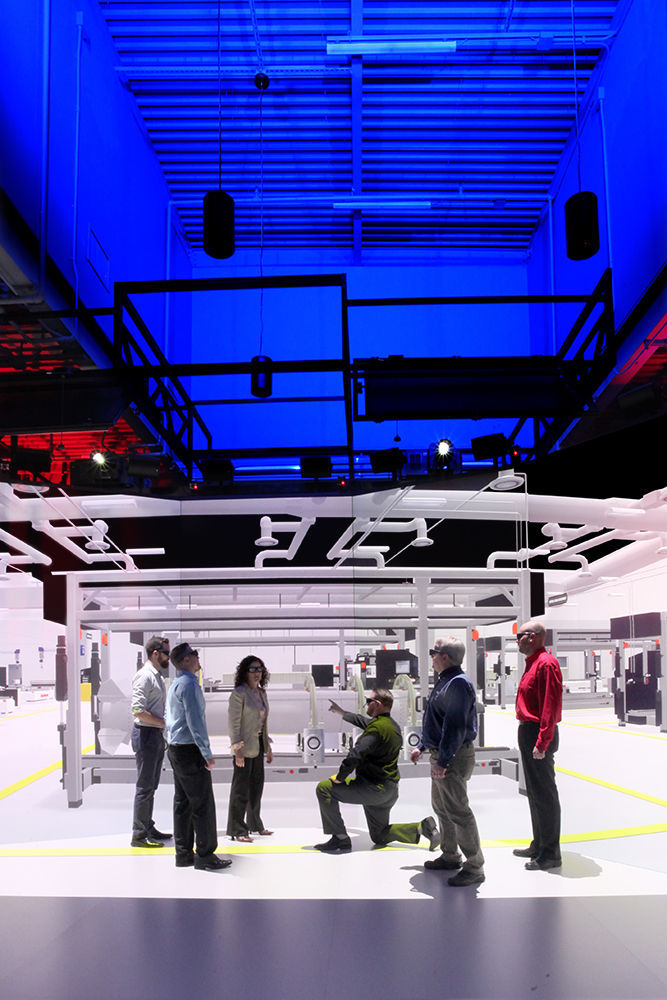 CAVE has become a go-to tool for facility design. It is being used to plan two new buildings at Raytheon’s airport site. 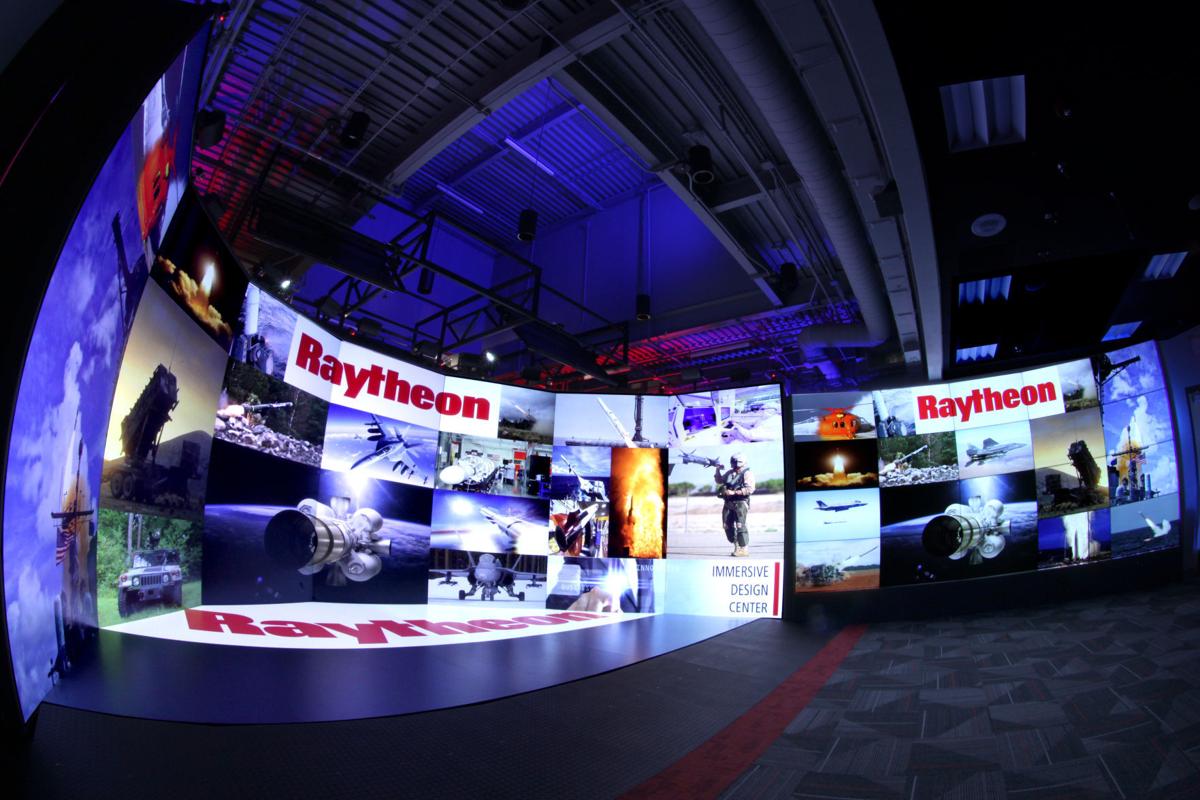 In the Raytheon Immersive Design Center in Tucson, workers can collaborate on design and development using three-dimensional stereoscopic immersive visualization. 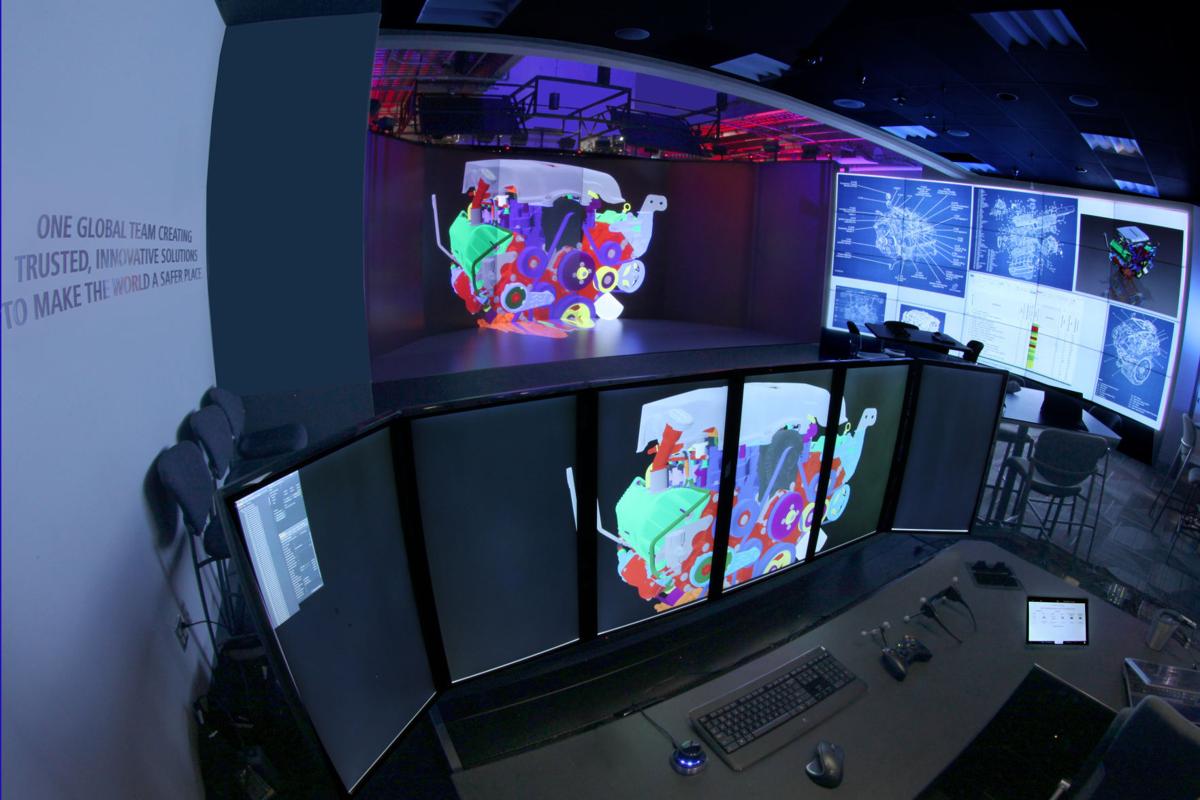 Raytheon is exploring ways to use the CAVE for training. Workers could be asked to spot problems in a virtual factory.

In a darkened room in Raytheon Missile System’s sprawling Tucson airport plant, future weapon systems and the company’s next construction project are taking shape in a CAVE.

But this isn’t just any cave, its a room-sized, interactive 3-D theater known by the trade name CAVE Automatic Virtual Environment, or generically a “computer assisted virtual environment.”

Using the CAVE, teams of Raytheon engineers and other workers can collaborate on design and development using three-dimensional, stereoscopic “immersive visualization.”

Much more than a cool video-game technology — though that doesn’t hurt either — the CAVE has become a major tool for collaborative, real-time product and facility development, said Kendall Loomis, manager of Raytheon Immersive Design Center.

With computer-aided design plans loaded into CAVE, participants can virtually navigate through a product like a missile, or “walk” through a virtual factory floor, Loomis said.

“We’re actually going to fly into a missile — this is the core of what we do here,” she said as she demonstrated the system.

Fitted with 3-D glasses, the observer gets a close-up, dynamic look at the innards of a generic missile, with electronics and mechanics laid out to exact scale.

Traditionally, engineers responsible for different missile components have consulted designs, ordered parts and created prototypes, often to find they didn’t work in the final product because of things like production and maintenance issues, Loomis said.

The CAVE allows workers from the factory floor to collaborate with engineers to avoid such problems, she said.

“We’ll have our assemblers and testers in here and they’ll say, ‘that looks great, but where is my torque wrench supposed to go?’ or ‘how does my hand fit in there?’ or ‘don’t you realize by the time that assembly gets to my workstation, it’s sealed and I have nowhere to thread that wire,’” Loomis said. “And the mechanical engineer says, ‘Oh my gosh, I never thought of that before.’ So it’s that collaboration in that environment that is the power of this visual.”

The CAVE also can be connected to similar systems for cross-country virtual collaboration.

Raytheon’s CAVE systems are made and custom-installed by Iowa-based Mechdyne Corp., which installed the latest system at Raytheon’s Tucson operation last October to replace a smaller system set up in 2010.

In 2014, Raytheon installed the industry’s first CAVE2 system, featuring a 320-degree view, at another immersive design center in Andover, Massachusetts.

Raytheon also has two smaller, portable CAVE units that can be shipped to customer or supplier sites for long-distance VR conferencing.

Such collaboration can be a huge time- and money-saver.

Loomis recalled one example where the company was asked to redesign a wire harness system for a missile, which initially made up some 500 pages of drawings.

The design was digitized and fed into the CAVE system in Tucson, and a portable CAVE system was shipped to Raytheon’s supplier in New Hampshire so engineers could collaborate virtually on issues such as pinch points and heat hazards.

As a result, the design was converted to a flexible cable that worked, beating the 18-month design deadline by eight months and coming in 40 percent under budget, Loomis said.

When Raytheon was designing its $75 million missile assembly plant in Huntsville, Alabama, the CAVE in Tucson allowed a team of engineers, factory staff, program leaders, safety officials and contractors to collaborate on the layout of the highly automated plant, where shuttles autonomously convey missiles from one work station to the next.

In the virtual world, the team found hundreds of issues, from space and clearance issues to missing exit signs and doors too short for taller workers.

In all, the team fixed 49 issues, saving an estimated $1.5 million in construction costs.

“We iterated it 57 times before we broke ground,” Loomis said.

The CAVE system is now being used by Raytheon to plan two new buildings at its Tucson airport site.

The company, already Southern Arizona’s biggest private employer with nearly 10,000 local workers, announced in November it will build new facilities and add some 1,900 workers here in the next five years.

Raytheon and other defense firms also use VR setups for training. The Air Force has used flight simulators for decades, and today all the armed services are exploring or using some form of VR training.

“It saves a lot of money, like all simulation-based training does — it’s a real cost saver for the military across the board,” said John Williams, a spokesman for the National Defense Industrial Association and the affiliated National Training and Simulation Association.

In 2014, the Pima County Sheriff’s Department began using a 300-degree, five-screen, VR setup to train officers on how to react in certain situations, with multiple outcomes depending on how an officer responds.

Looking ahead, Loomis said Raytheon is exploring ways to use the CAVE for employee training, for example, immersing quality-control employees or applicants in a virtual factory set up with numerous visible safety problems and asking them to spot them.

Raytheon also is working to pull more data analytics into the mix, including structural, thermal, mechanical and electric data, for sophisticated modeling, she said.

“That large-scale data analytics will blow the roof off what we do here — that is very cutting-edge and very unprecedented in this environment, to take multiple, different software apps and interlace them together in one place over a visual.”

Deadline to apply for the trek, sponsored by Raytheon, is May 1.

Reglagene was co-founded by the head of drug discovery at UA's Bio5.

Final testing would pave the way for a program worth $4 billion.

Tucson Tech: Rocket firm surging ahead on all fronts

At Raytheon Missile Systems, engineers and other workers fitted with 3-D glasses get a close-up look at the innards of a missile, with electronics and mechanics laid out to exact scale. The dynamic visual allows assemblers to spot potential problems early.

CAVE has become a go-to tool for facility design. It is being used to plan two new buildings at Raytheon’s airport site.

In the Raytheon Immersive Design Center in Tucson, workers can collaborate on design and development using three-dimensional stereoscopic immersive visualization.

Raytheon is exploring ways to use the CAVE for training. Workers could be asked to spot problems in a virtual factory. 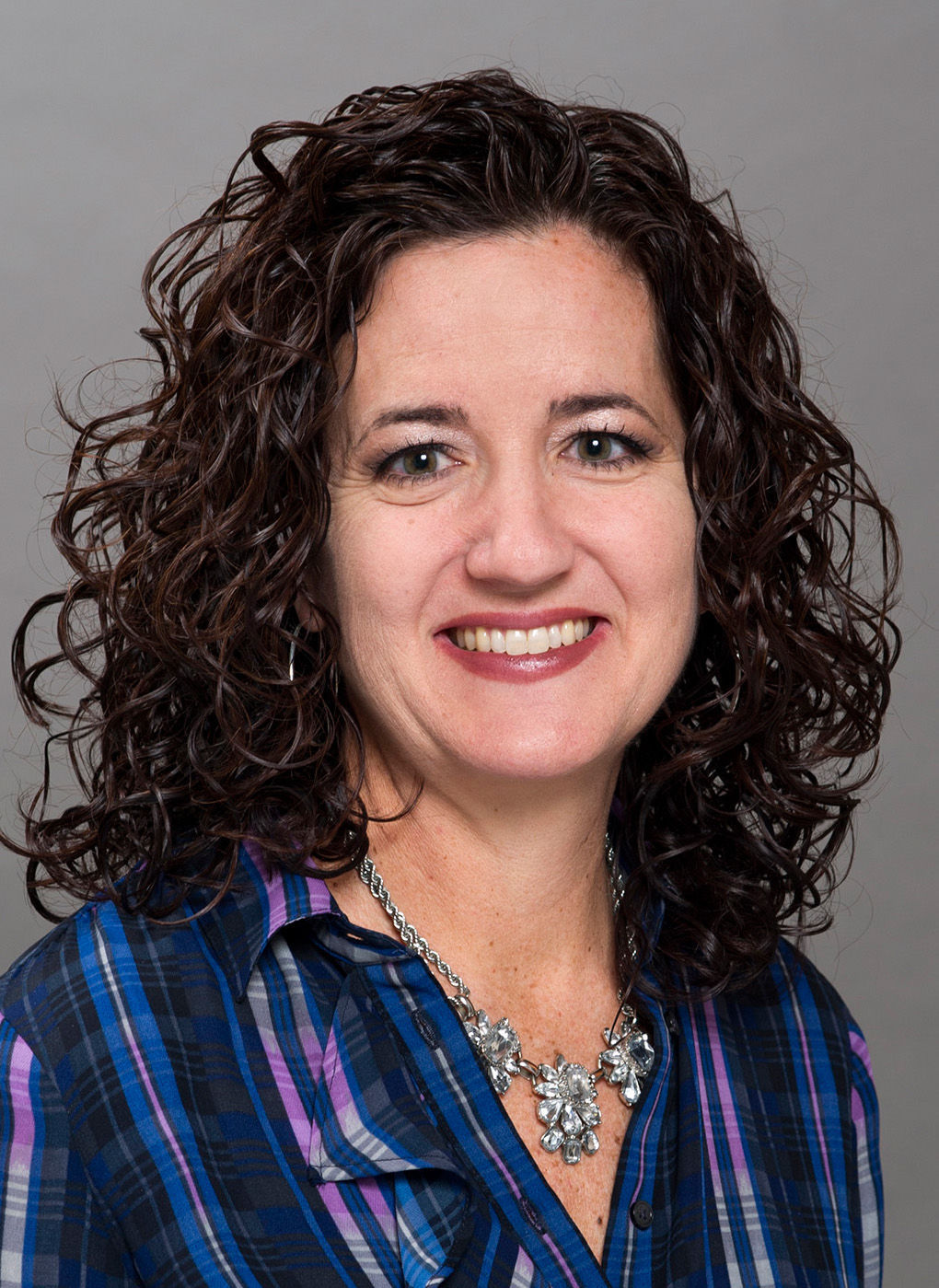