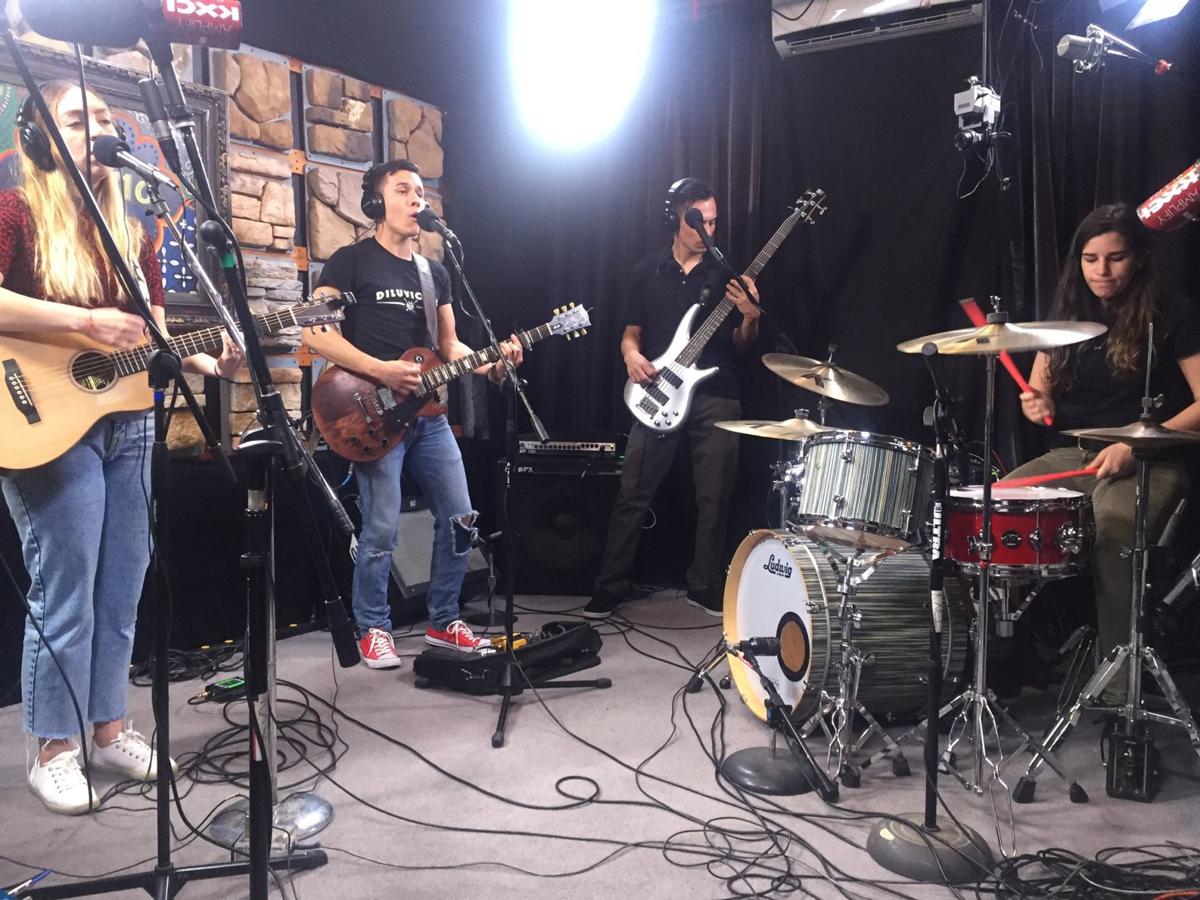 Diluvio AZ performs live during the “Locals Only Live in Studio 2A” program at KXCI-FM in Armory Park on June 10. Left to right are: Alejandra Karlet Perez on guitar, Eduardo Ramirez on guitar, Edwin Cordova on bass and Lucia Dabdoub on drums. 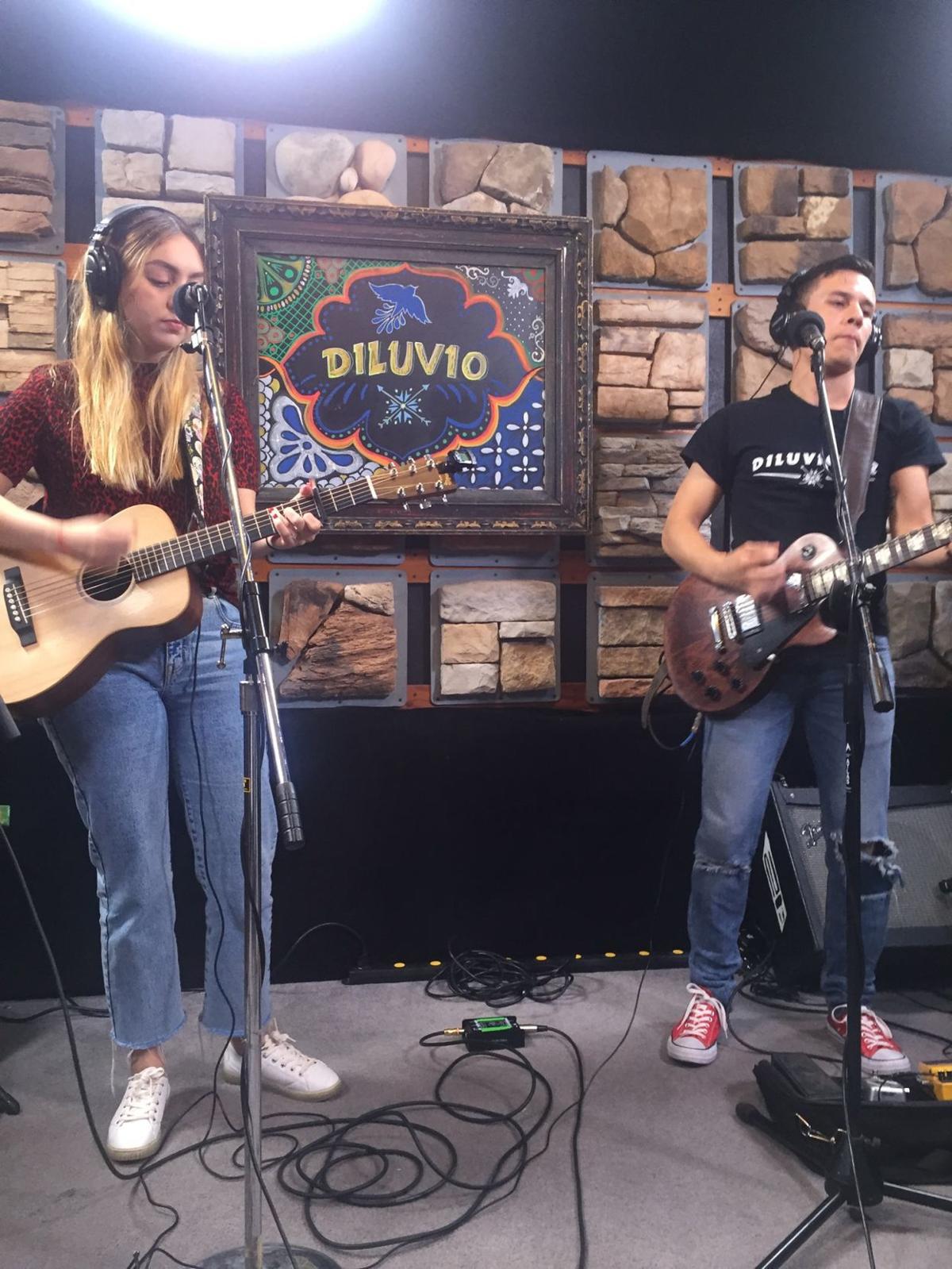 Diluvio AZ performs live during the “Locals Only Live in Studio 2A” program at KXCI-FM in Armory Park on June 10. Left to right are: Alejandra Karlet Perez on guitar and Eduardo Ramirez on guitar. 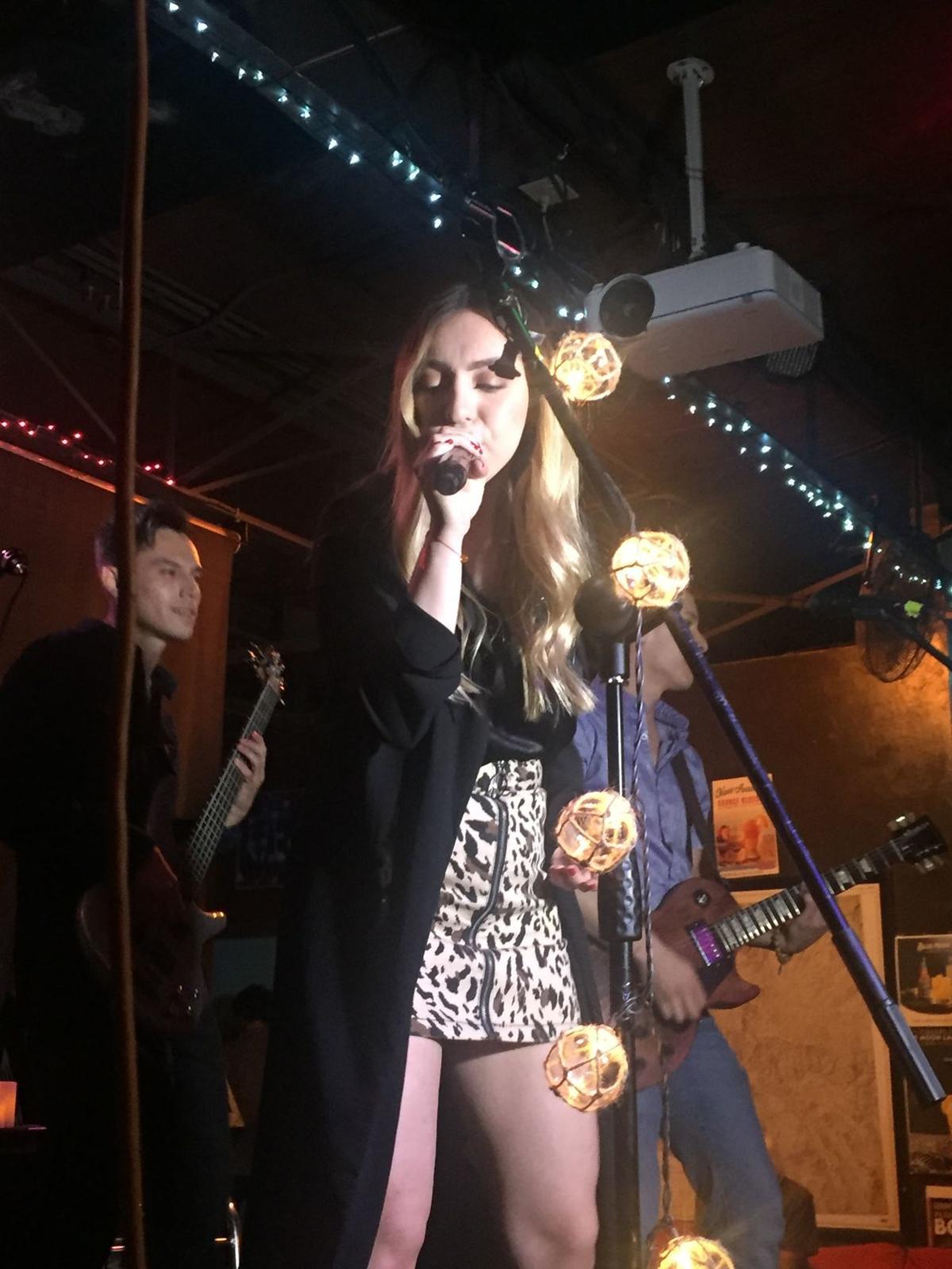 Alejandra Perez and Diluvio AZ at their CD-release party at Sky Bar. 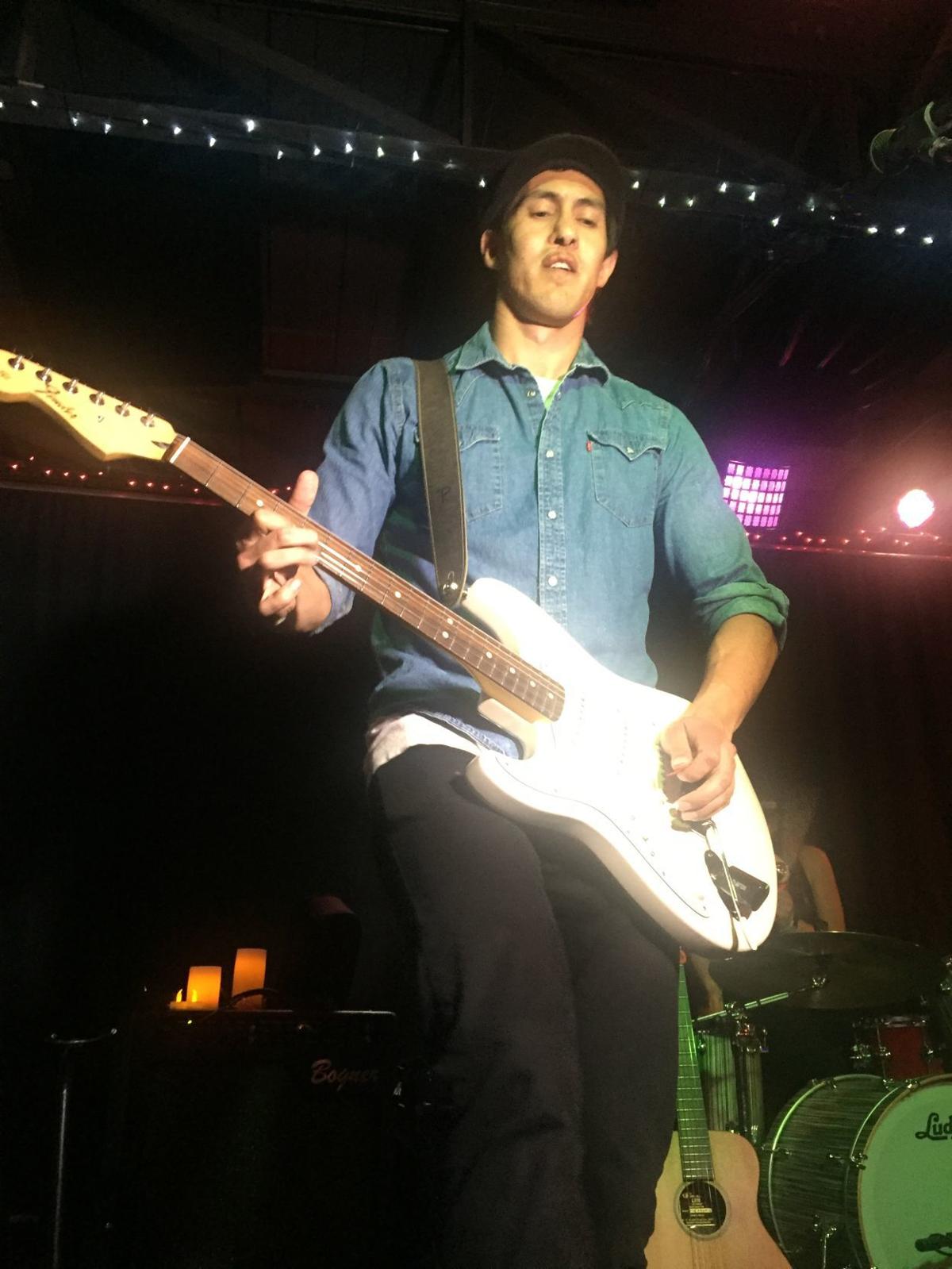 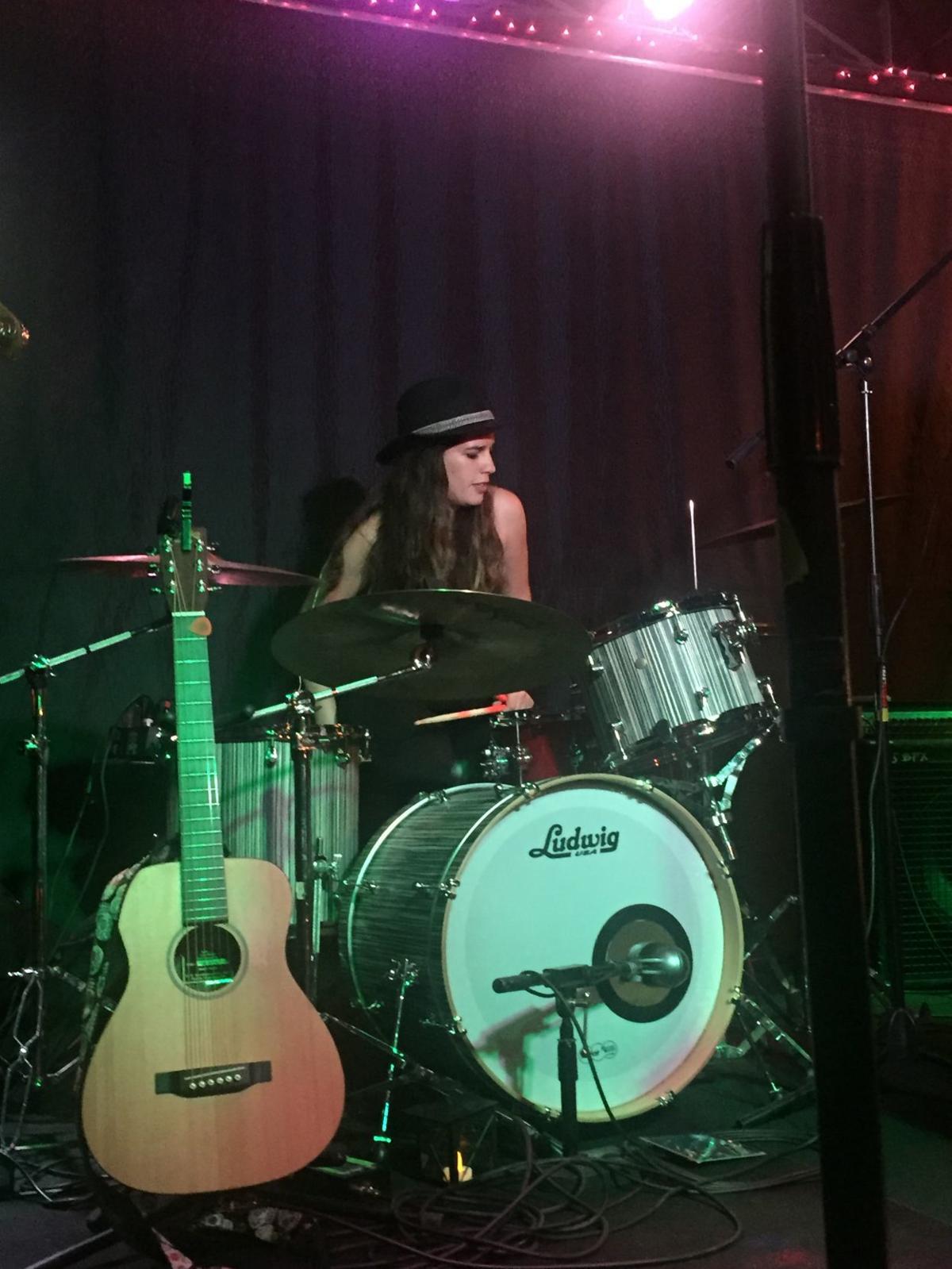 The Diluvio AZ band members, who grew up in Mexican-American homes in Tucson and in Nogales, are completely bilingual. But their language of preference on stage and in the recording studio is Spanish.

Diluvio AZ is a Tucson pop rock band that made a deliberate choice.

“We just started writing music in Spanish,” said Alejandra Perez, the group’s lead vocalist. “I feel it came naturally to us.”

Earlier this month, the band dropped its first full-length CD, “Marea en el Desierto,” recorded in Tucson. The band held a CD-release show June 8 at the Sky Bar on North Fourth Avenue and a couple of nights later performed on “Locals Only Live in Studio 2A” program on KXCI, 91.3-FM hosted by Sophie Gibson-Rush.

The band, which recorded an EP, “Libro de Canciones” in 2016, has performed in clubs around town and has opened for major rock en español acts at the Rialto Theater and 191 Toole. Last summer, the group gigged in Mexico City for a week. Later this month, Diluvio AZ will perform in Southern California and next month in El Paso, Texas.

Performing in Spanish is organic for the five members, all of whom grew up listening to music in Spanish.

“It felt like the right thing to do. It just makes more sense. It’s part of our identity,” said Perez, who graduated from the University of Arizona in May.

While the band members listen to Latino artists like Shakira, Juan Gabriel and Santana, their music of choice is rock and punk, music inspired by American bands like Blink 182, Warpaint and Slipknot, and P en español bands like Cafe Tacvba, Soda Stereo and Elefante.

Perez said that the band does not want to be restricted in binary worlds.

“You’re either Mexican or American. No, like us, we’re both. We wanted to make something that people could relate to,” she said.

The “Marea,” album is about identity and “how we are as young people in Tucson and the U.S.,” she said. “I like to listen to the Misfits and mariachi, too.”

In addition to Perez, the other band members are drummer Lucia Dabdoub, Edwin Cordova on bass, Eduardo Ramirez on guitar and Alejandra’s older brother, guitarist Danny Perez. Dabdoub and Ramirez graduated from high schools in Nogales, Arizona, while the Perez siblings and Cordova hail from Sunnyside High School.

While their shared love of music is the glue that keeps Diluvio AZ together, the band members did not meet through music. Several of them initially met through their social justice work.

Daboub and Ramirez were working with deported Mexican migrants when they came to Tucson to recruit fellow high school students. They met Alejandra Perez who went to Nogales to join the humanitarian effort. They discovered their shared love for rock and punk and they formed the band.

The group’s music is not overtly political but the fact that they are Mexican-Americans playing rock is a political statement in itself.

Up your shopping game: 3 Tucson stores with items you won’t find elsewhere

From pieces of the past to uniquely Tucson items, these shops are worth checking out.

Who needs a neighbor from hell?

Get ready for prickly pear season

Mike Jones is a tall, genial fellow with a droll sense of humor. In his day-to-day life, he’s a loan officer with Sunstreet Mortgage. But at t…

Above average temps expected in Tucson, slight chance of storms in Cochise County

Tucson probably won't see any rain today, but there's a slight chance that Cochise County will.

Suspect arrested in connection with death of man in Tucson home

A suspect has been arrested in connection with the death of a man in a Tucson home, officials say.

Diluvio AZ performs live during the “Locals Only Live in Studio 2A” program at KXCI-FM in Armory Park on June 10. Left to right are: Alejandra Karlet Perez on guitar, Eduardo Ramirez on guitar, Edwin Cordova on bass and Lucia Dabdoub on drums.

Diluvio AZ performs live during the “Locals Only Live in Studio 2A” program at KXCI-FM in Armory Park on June 10. Left to right are: Alejandra Karlet Perez on guitar and Eduardo Ramirez on guitar.

Alejandra Perez and Diluvio AZ at their CD-release party at Sky Bar.