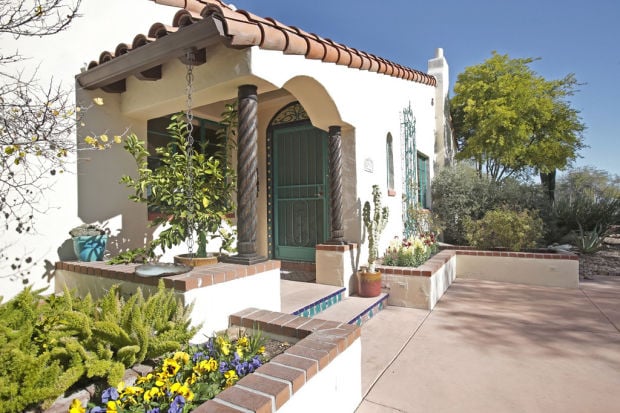 Carol and Tom Andrews, residents of the Blenman Elm neighborhood since 1994, live in this 1937 Spanish colonial home that has maintained much of its original flavor. 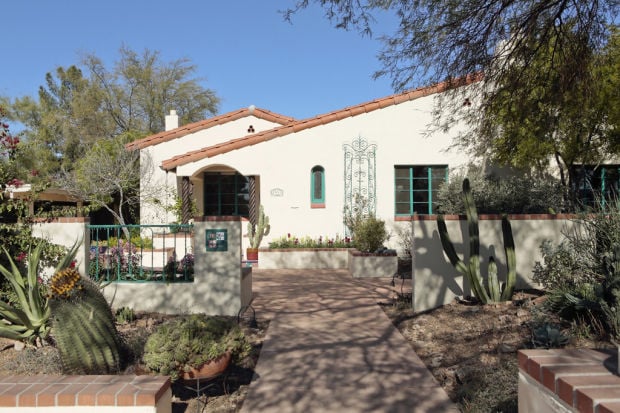 Blenman Elm neighbors make it a better place to live, says Carol Andrews, who lives in this house with her husband, Tom. 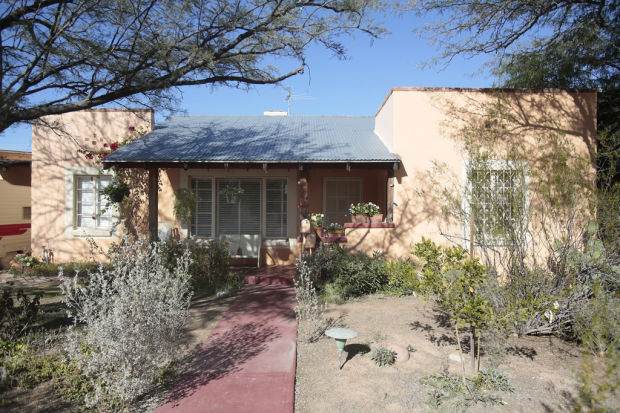 The territorial-style home of Hannah Glasston and Patrick Hynes. 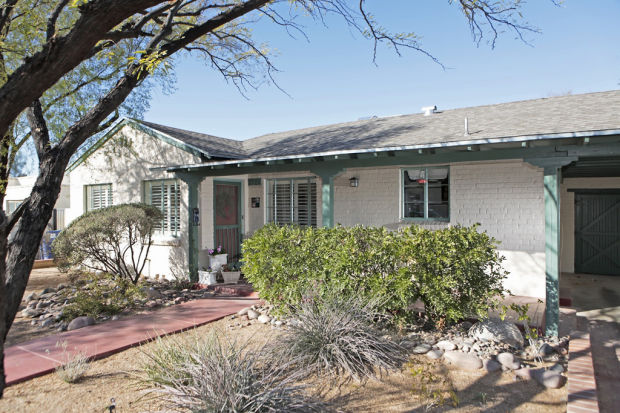 Jane and Don Powers have lived in this 1938 ranch-style home since 1978. They sent their kids to Blenman Elementary School. 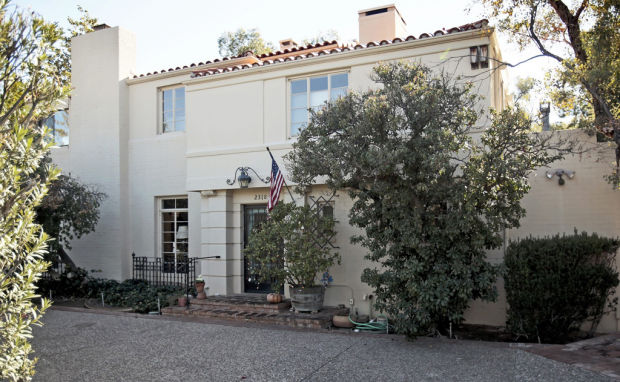 The prairie-style home of Alice Roe, president of the Blenman Elm Neighborhood Association. 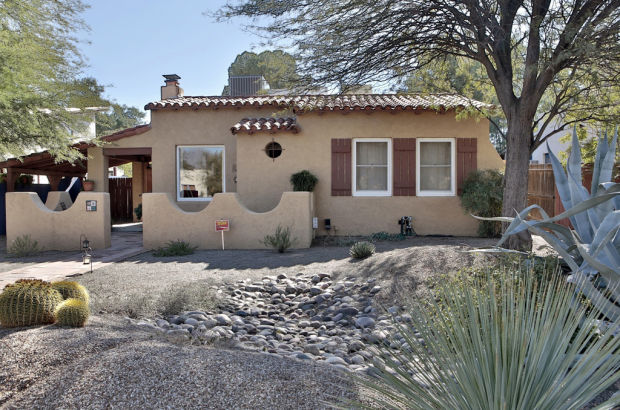 The exterior of the Josias Joesler-designed home of Kathy Kretschmer.

Editors note: Today we launch a series on Tucson neighborhoods - the homes, the vibes, the people. Look for the Where We Live series monthly in the Home + Life section of the Arizona Daily Star.

Church bells ring gloriously as Linda Phelan putters in her garden. On clear evenings, she sits atop the roof of her home in the heart of the Blenman Elm neighborhood, gazing at the night skies.

She pedals her bike through her midtown neighborhood, running errands to the nearby post office, drugstore and library.

For a quarter of a century, this historic neighborhood has been a little corner of heaven for Phelan.

"I moved here from rural Vermont and it was my first time living in the city," she said.

"I am interested in nature, and I was concerned there wouldn't be any in the city."

Phelan and her husband have identified 106 species of birds in the neighborhood, including great horned owls. Cooper's hawks nested in her yard last year.

But the best part of living in Blenman Elm?

The roots of the Blenman Elm neighborhood, designated as one of Tucson's historic districts, date to 1900, when early developer Andrew Olsen built a home at the northeast corner of Helen Street and Plumer Avenue - far east of town at the time.

Development grew slowly over the next 35 years, as Tucson emerged as a health and tourist destination with a growing university. The boom started in 1936, with construction reaching its peak in 1955. By 1960, the neighborhood, for the most part, was built.

Blenman Elm sits on the better part of a square mile just east of University of Arizona Medical Center. The neighborhood features 17 styles of homes that were popular between the 1920s and the 1950s, and is said to be the "vanguard" of the ranch-style home in Tucson. Included in the neighborhood are 21 homes built by Swiss-born Tucson architect Josias Joesler.

Julia Peters Newman, 95, has lived in Blenman Elm for 58 years. She raised her three children here, and outlived two husbands.

While the world has changed at light speed, the neighborhood "has stayed pretty much the same," Newman said.

"It's a wonderful place to live," she said. "The neighbors are so friendly. We take care of each other."

Newman, who retired after 35 years with Southern Pacific Railroad, drives herself to volunteer jobs - delivering for Mobile Meals of Tucson, cuddling babies in neonatal intensive care at Diamond Children's Center at UAMC, and working at the Southern Arizona Transportation Museum.

"This neighborhood has a lot of history in it," she said. "It's just a gorgeous place to live."

Carol and Tom Andrews have lived in Blenman Elm since 1994, in a 1937 Spanish colonial home that has maintained much of its original flavor.

"We were lucky enough to find a woman who lived here as a young girl from the 1930s to the 1950s," Carol Andrews said. "She came to visit with her daughters and granddaughters."

They walked through the home together, and the woman shared stories from long ago that included the harrowing tale of a kitchen fire.

"We are a devoted neighborhood. And very diverse," said Roe, who lives in a 1937 home designated as prairie style, the only one in the neighborhood.

She enjoys pockets of wildlife you might not expect in the city. "You have the best of the city and suburbia right here," Roe said.

Jane and Don Powers have lived in a 1938 ranch-style home in the neighborhood since 1978. They sent their kids to Blenman Elementary.

"I like the different styles of homes and clusters of Joeslers," Jane Powers said. "I love being in the same neighborhood as the Arizona Inn. It is just beautiful."

Here is a bit of history about the Blenman Elm neighborhood, gleaned from documentation nominating the neighborhood as an historic district:

Blenman Elm is seen as architecturally significant. Although early land speculators envisioned a neighborhood of bungalows and revival-style cottages, development from the late 1930s through the mid-1950s made it one of Tucson's earliest ranch-style residential neighborhoods.

Among the earliest developers were Calvert Wilson and Andrew Olsen, who have streets named after them, and Charles and Louise Blenman - the neighborhood school is named after Charles Blenman.

Blenman Elm contains examples of 17 styles of architecture, but is characterized by its ranch style houses with Spanish eclectic influences. This style was inspired by Sonoran-style adobe row houses in Tucson's barrio, as well as the Army-built structures of Fort Lowell, according to documentation.

Among the most significant contributors to this style was architect Josias Joesler.

Joesler was "attuned to both the high style and vernacular architecture of Spain and of the Latin American countries. He understood the context in which Tucson's barrio row houses were created. He borrowed from the architectural heritage of the Hispanic culture to develop a local flavor to nationally popular high styles,'' according to documentation.

• Noteworthy: Birth control pioneer Margaret Sanger lived just east of the Arizona Inn in the 1940s. Author and philanthropist Grace Flandrau lived in the same home during the early 1960s.

In all of its rosy splendor, the Arizona Inn is a historical jewel of the Blenman Elm neighborhood.

Isabella Greenway - Arizona's first congresswoman and a lifelong friend of Eleanor Roosevelt's - built her home in 1928 on Olsen Avenue at Elm Street. Greenway supported World War I veterans through a furniture-making business called The Arizona Hut.

When the shop ran into financial trouble after the stock market crash of 1929, Greenway opened the Arizona Inn in 1930 to create enough demand for furniture to keep the shop going and to provide lodging for visitors to the city.

The elegant property on 14 acres of gardens is a true local treasure. It was added to the National Register of Historic Places in 1988. The inn's trademark pink hue, as the tale goes, was the shade of Greenway's rouge in the setting sun. She tapped her cheek and said, "This is the color.''

Dear Amy: I am not pretending to be a saint, but was I wrong to end my “on again/off again” involvement with a married man in the way I did?

Dear Amy: My daughter is going to be celebrating her quinceañera this summer.

Rosie on the House: The difference between Arizona roofing systems

Dear Amy: My guy and I have been dating for five years, engaged for three, and living together for two.

Dear Amy: A bunch of us blood cancer patients, as well as others with compromised immune systems, are starting to find out through blood tests…

Ask Amy: Mom would like to be offered a cup of joe

Dear Amy: My (much older) brother-in-law, “Walter,” is a healthy, attractive, heterosexual man in his early 70s who is comfortable financially…

Dr. Roach: Colonoscopy not recommended past 85

DEAR DR. ROACH: After my doctor moved, my new doctor would not order me a colonoscopy because I had turned 90. Are all doctors like that? My f…

Carol and Tom Andrews, residents of the Blenman Elm neighborhood since 1994, live in this 1937 Spanish colonial home that has maintained much of its original flavor.

Blenman Elm neighbors make it a better place to live, says Carol Andrews, who lives in this house with her husband, Tom.

The territorial-style home of Hannah Glasston and Patrick Hynes.

Jane and Don Powers have lived in this 1938 ranch-style home since 1978. They sent their kids to Blenman Elementary School.

The prairie-style home of Alice Roe, president of the Blenman Elm Neighborhood Association.

The exterior of the Josias Joesler-designed home of Kathy Kretschmer.