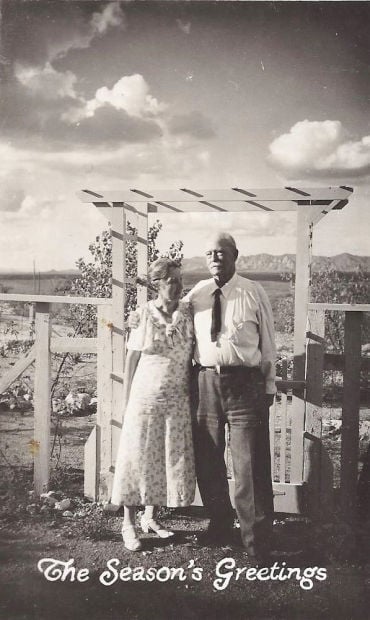 ﻿Christmas Postcard with Jeff and Mildred Milton, circa 1936. The couple married in 1919. 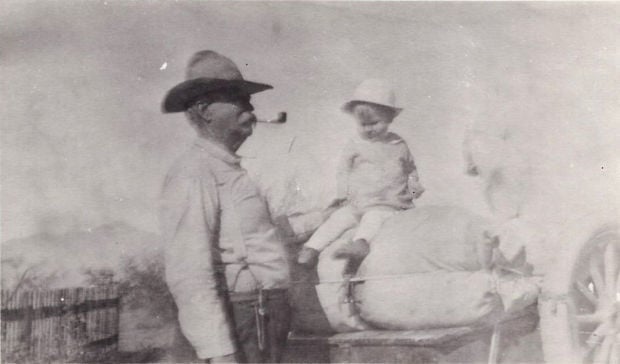 ﻿Jeff Milton was essentially the nation’s first Border Patrol agent, before the agency was created. He spent the 28 years traversing the borderlands by horse and by Model T Ford, looking for smugglers and illegal activity.

Jeff D. Milton was born Nov. 7, 1861, to John and Caroline Milton outside of Marianna, Florida. He was a descendant of famed British poet John Milton and his father, also named John Milton, served as the Confederate Governor of Florida during the Civil War.

On April 1, 1865, when it became clear the South would lose the war, his father chose to take his own life rather than live under Northern rule. This left his mother to raise their many children and run the Sylvania plantation, with many of the former slaves staying on to work as laborers.

In 1877, Milton, then 16 years old and longing for adventure, headed to Navasota, Texas. After working for his brother-in-law in a mercantile store for a year, he took his .44 Winchester rifle and headed for the Texas frontier.

He worked for a short while as a cowhand for the Saw-Horned Cattle Co. in northern Texas. He then returned to Navasota and decided life as a Texas Ranger was for him.

During his three years as a Ranger, from July 27, 1880 to May 10, 1883, he was involved in everything from preventing a race riot in San Angelo, Texas to teaching a fellow Ranger, “Buffalo Bill” Jenkins, to read and write. But most of time he chased outlaws.

He spent the next few years in Western Texas and New Mexico, and finally St. Johns, Arizona. There, Milton received a telegram offering him a job as a mounted inspector on the Arizona-Mexico border.

On March 11, 1887, he was formally enlisted as a mounted inspector, and stepped off the train in Tucson and received his orders at the office of the Collector of Customs: He was to be stationed in Tucson and was to patrol the border by himself. He was paid $100 a month but had to equip himself with a horse, weapon and whatever else he needed.

The trail Milton used to patrol the border area left Nogales, Arizona and headed west finishing at Sonoyta, Sonora, Mexico, before heading back to Tucson.

Milton was in Tucson on May 3, 1887 when an earthquake hit. While the ground shook, buildings collapsed and the court house dome swayed, he ran down the street calling for residents to get out of their homes.

In time he transferred to the custom house in Tombstone and patrolled the eastern part of the Arizona border, this time with a partner. Mostly they captured smugglers carrying mescal across the line. He left the customs service in October 1889.

Next, he worked as a conductor for the Pullman Palace Car Co. on a train run from El Paso, Texas to Mexico City.

In 1894 he became the chief of police in El Paso, but by the following year was an agent for Wells Fargo. In February 1900, in his role as a security guard and messenger for Wells Fargo, he fought five members of the Burt Alvord (namesake of Alvord Road) gang, who attempted to rob his train at Fairbank. His arm was shattered by a bullet, and even after an operation at St. Mary’s Hospital it was no longer of much use.

At the turn of the century, with restrictions on Chinese immigration still in effect in the U.S., many immigrants traveled to Mexico and from there were smuggled illegally into Arizona. As the Border Patrol had not yet been created, very little had been done to stop it. It was decided that a line rider was needed and Milton was recommended for the new position. He was appointed by President Theodore Roosevelt with a starting date of May 1, 1904.

Milton was originally called a Chinese Inspector and then in 1913, an Immigration Inspector. But he was essentially the nation’s first Border Patrol agent, long before the agency was created. He spent the next 28 years traversing the borderlands by horse and then by Model T Ford, looking for smugglers and illegal activity. He was stationed at Nogales, Herford, Fairbank, Ajo and Tombstone.

Sally (Gamble) Lee, a great-grandniece of Milton, remembers an old timer from Tombstone who had known her uncle and shared this tidbit: “When Jeff would drive his old car or truck, he’d get in, and swing his shoulder forward to make his hand land up onto the steering wheel where he’d leave it while driving with his other arm. This way no one would notice that he only had the use of one arm.”

Chris Milton, a great- grandnephew of Jeff D. Milton, had this story to share: “My father, Lt. Col. Ronald A. Milton, told me Jeff’s wife shared with him that each night after dinner, he would ride his horse up to the top of a small hill behind their home in Tucson, where he would sit on his horse watching the sun go down. She said this was Jeff’s quiet time to reflect on the day.”

Milton Road was officially recorded with Pima County in 1947.

Find the sources used in this story with the online version at tucson.com

﻿Christmas Postcard with Jeff and Mildred Milton, circa 1936. The couple married in 1919.

﻿Jeff Milton was essentially the nation’s first Border Patrol agent, before the agency was created. He spent the 28 years traversing the borderlands by horse and by Model T Ford, looking for smugglers and illegal activity.