Read Today's E-Edition
Share This
Rich Rodriguez fired in what UA athletic director, president say is a difficult but 'right' decision
Share this
1 of 3 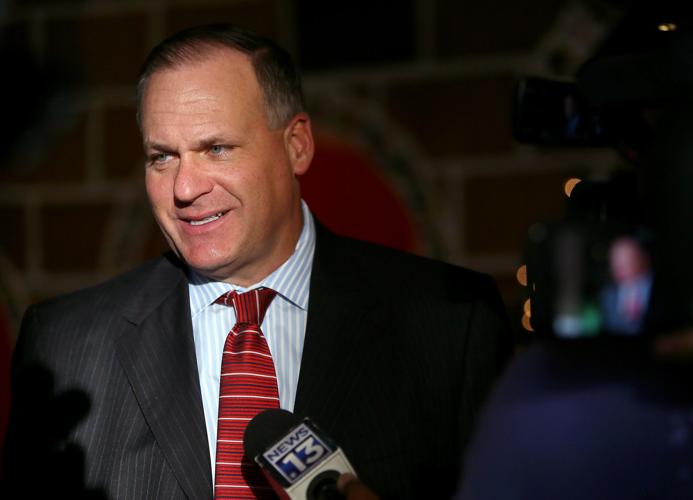 Former UA coach Rich Rodriguez may soon be added to a Title IX lawsuit against the university. 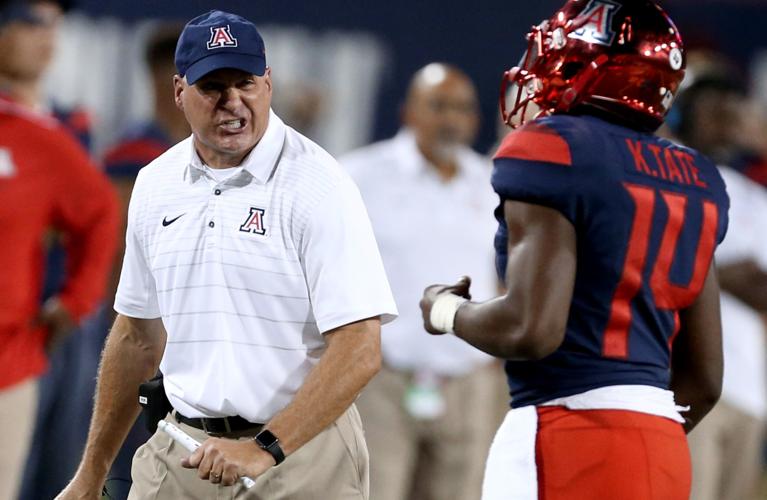 Rich Rodriguez was fired the same day a sexual harassment and hostile workplace claim against him came to light. He said the claims by his former assistant aren’t true. 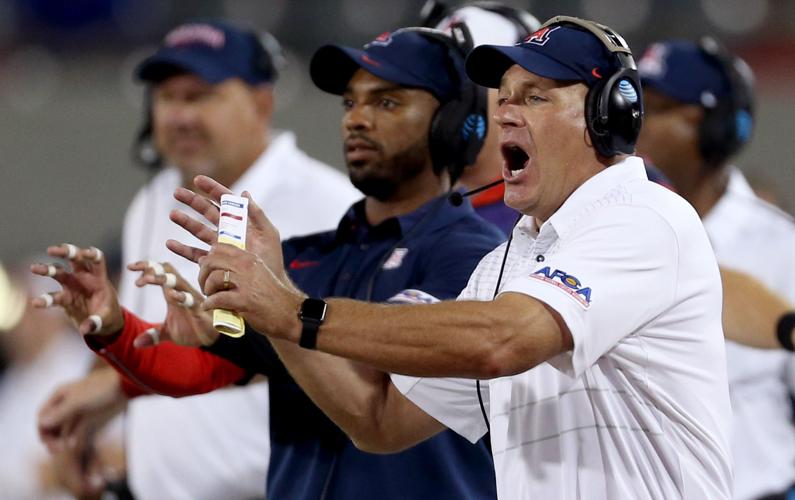 Rich Rodriguez on his young Wildcats, who open Pac-12 play Friday: “I think we’ve gotten better. I like their attention, their focus, so far.”

Rich Rodriguez was fired on Tuesday after a $7.5 million notice of claim was filed with the state Attorney General’s Office alleging that Arizona’s head football coach ran a hostile workplace and sexually harassed a former employee.

The UA announced Rodriguez’s firing in a news release around 8:30 p.m. University President Robert C. Robbins and athletic director Dave Heeke said they will “honor the separation terms” of the coach’s contract, after an internal investigation did not find enough evidence to fire him for cause. His buyout is about $6 million.

“While this is a difficult decision, it is the right decision,” they wrote. “And it is a decision that lives up to the core values of the University of Arizona.”

Rodriguez, 54, just finished his sixth season as the Wildcats’ coach following stops at Michigan and West Virginia. This year’s team went 7-6, losing four of its final five games after a surprising start. Purdue beat the UA in the Dec. 27 Foster Farms Bowl.

Rodriguez tweeted a statement late Tuesday in which he said he will “vigorously fight these fabricated and groundless claims” made by his former administrative assistant. The coach said he was fired by email.

“I am not a perfect man, but the claims by my former assistant are simply not true and her demands for a financial settlement are outrageous,” he wrote.

and an alleged cover-up

The notice of claim was filed Thursday by the former employee and her attorney. A notice of claim is an advance notice of intent to file a lawsuit against a public body. Most notices of claim are first sent to the Arizona Board of Regents or the University of Arizona itself. Her $7.5 million claim went directly to the Attorney General’s Office.

Portions of the claim obtained by the Star on Tuesday paint a culture in which secrecy was valued above all else.

The notice of claim alleges, among other things, that Rodriguez and his closest aides followed a “hideaway book” that detailed such sayings as “Title IX doesn’t exist in our office,” referring to the federal gender-equity law.

Those who had the most interaction with Rodriguez — the former employee and two assistant coaches — referred to themselves as the “Triangle of Secrecy,” according to the claim. The three were tasked with lying to Rodriguez’s wife to cover up an extramarital affair, according to the claim, and were ordered to protect the coach’s reputation above all else.

The former employee said in the claim that she “had to walk on eggshells at work, because of (Rodriguez’s) volatility and sheer power over the department.” Rodriguez would call her at all hours of the night, she said in the claim, to change travel plans or to deal with Rodriguez’s personal emergencies. In the claim, the former employee said she became increasingly troubled by Rodriguez’s actions over the past year. She suffered migraines as a result, the claim states.

The UA’s Office of Institutional Equity began investigating Rodriguez in October, three months after the former employee left for an off-campus job.

The investigation concluded last week, Robbins and Heeke wrote. And while counsel did not find enough to terminate Rodriguez, the university became concerned with the “climate and the direction” of the football program, they wrote.

Rodriguez said Tuesday night that the complaint included “a single truth” — that he engaged in a “consensual extramarital affair” with a woman who is not affiliated with the university.

“I am still working incredibly hard to repair the bonds I’ve broken and regain the trust of my wife and children, whom I love dearly,” he wrote.

for the UA over athletics

The notice of claim is the latest legal issue facing the UA. Former assistant track and field coach Craig Carter is facing multiple felony charges, accused of threatening a former athlete with whom he was involved in a sexual relationship. The case has been featured on both ESPN’s “Outside the Lines” and ABC’s “20/20.”

The UA is being sued in federal court by one of three victims of former running back Orlando Bradford. The victim says the university knew Bradford was a danger to women and failed to protect her. Bradford was recently sentenced to five years in prison after pleading guilty to two felony counts of aggravated assault.

And in August, Rodriguez was sued in civil court by Creative Artist Agencies (CAA). The agency represented the coach until the fall of 2015, and claims Rodriguez owes $230,050 in past-due fees.

Rodriguez’s contract was set to run through May 31, 2020. His buyout as of Dec. 1 was $6.45 million, according to USA Today’s annual survey of NCAA football coaches’ salaries. Because he was let go before March 15, Rodriguez will miss out on approximately $3.2 million from a master-limited-partnership provision in his contract. That pay came via publicly traded units on the so-called “Longevity Fund.” Rodriguez was set to receive 25 percent of the value on March 15. If he had been fired any time after that, he would have been entitled to the full value of the fund.

Rodriguez’s hiring on Nov. 23, 2011, was seen as a coup for the UA and newly hired athletic director Greg Byrne.

Arizona won a bowl game in Rodriguez’s first year and took the Pac-12 South Division title and finished 10-4 in 2014, then started trending downward.

The Wildcats finished 7-6 the following season, most of which was played without star linebacker Scooby Wright. Sensing that recruiting was lagging and the defense wasn’t performing up to expectations, Rodriguez turned over Arizona’s defensive staff. He hired Boise State’s Marcel Yates as defensive coordinator and promoted Jahmile Addae and Vince Amey from analysts to full-time assistant coaches.

The injury issues worsened in 2016, when Arizona lost its top two quarterbacks and running backs at various points. After starting 2-1, Arizona lost eight in a row. Only a season-ending victory over rival Arizona State put a bandage on an otherwise painful season.

The Wildcats entered 2017 with the lowest of expectations outside the Lowell-Stevens Football Facility, picked to finish last by the media in the Pac-12 South. An uneven 2-2 start only served to validate that prediction.

But in Game 5, sophomore quarterback Khalil Tate came off the bench and set a Football Bowl Subdivision record for quarterbacks with 327 rushing yards in a 45-42 win at Colorado. Tate would lead Arizona to four straight victories, winning an unprecedented four consecutive Pac-12 Offensive Player of the Week awards.

The Wildcats secured bowl eligibility with a 58-37 win over Washington State on Oct. 28. They couldn’t follow up their perfect October, however, losing three of four games in November. Arizona finished the season with a 38-35 loss to Purdue in the Foster Farms Bowl.

The emergence of Tate and several freshmen on defense, including Pac-12 Defensive Freshman of the Year Colin Schooler, gave hope for bigger and better things to come in 2018. It also offered proof that the changes Rodriguez had made to the defensive staff were working, even if the immediate on-field results didn’t show it.

Heeke said Arizona’s next head coach will “build a solid foundation for our program and create an identity of Arizona football that the University, Tucson and Southern Arizona communities can be proud of. We’re excited about the future of our football program, and we look forward to introducing our new head coach at the completion of the search process.”

Several current and recently employed coaches would be logical candidates to succeed Rodriguez. Boise State’s Bryan Harsin, Memphis’ Mike Norvell, Utah State’s Matt Wells and Syracuse’s Dino Babers, who was an assistant at Arizona from 1995-2000, will certainly be mentioned as potential replacements.

Possible candidates who were recently let go but are still highly respected within the industry include Kevin Sumlin, Mark Helfrich, Butch Jones and Todd Graham. Jones was the coach at Central Michigan under Heeke from 2007-09.

Yates, who joined the staff in January 2016, will serve as the interim head coach.

It is unclear what will happen with the signing class of 16 players that Arizona announced last month.

The Star’s Ryan Finley, Michael Lev and Joe Ferguson contributed to this report.

Timeline: How Rich Rodriguez was fired as Arizona's head coach in an hour and a half

A weak storm system in the region could bring rain to areas east of Tucson.

Updated: These 20 coaches could be candidates to coach Arizona Wildcats in 2018

Star reporter Michael Lev looks at the coaches most likely to be tied to Arizona's opening.

Heeke's decision was based on several factors, including on-field performance and attendance.

Arizona Wildcats Show: After Rich Rodriguez's firing, where does the UA turn?

The issue is more complicated for the 16 players who signed in December, as their national letters of intent limit their options.

The pair of motions ends nearly four years of legal grappling involving Melendez, Rodriguez — who was fired in January 2018 — and the UA.

Former UA coach Rich Rodriguez may soon be added to a Title IX lawsuit against the university.

Rich Rodriguez was fired the same day a sexual harassment and hostile workplace claim against him came to light. He said the claims by his former assistant aren’t true.

Rich Rodriguez on his young Wildcats, who open Pac-12 play Friday: “I think we’ve gotten better. I like their attention, their focus, so far.”