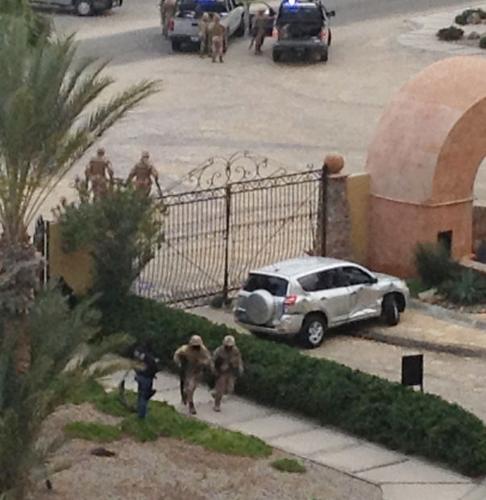 In this photo, which was provided by a witness, Mexican soldiers can be seen moving through a condominium complex near Sandy Beach in Rocky Point, Sonora, a beach town popular with Tucsonans. Mexican newspapers reported that a top boss in the Sinaloa drug cartel, Gonzalo Inzunza Inzunza, also known as “El Macho Prieto” was killed. 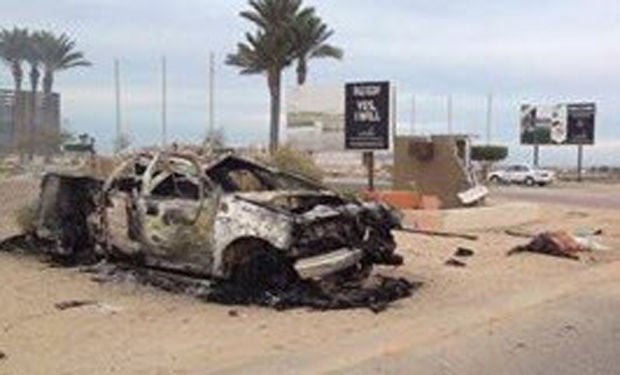 A burned-out vehicle outside the Las Palmas development in Rocky Point in which two people were reported to have died on Wednesday. 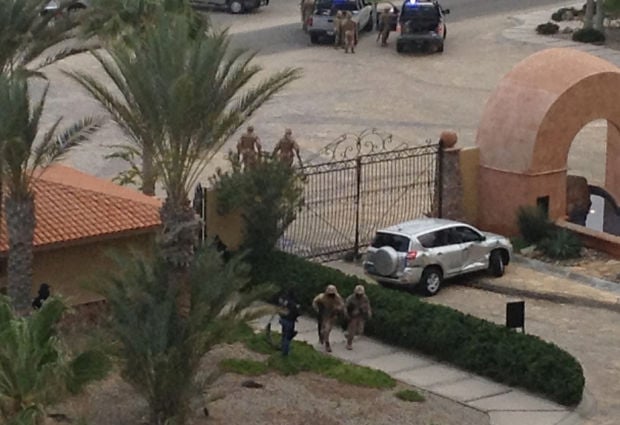 The sound of gunfire ripped through the Sonora beach town of Rocky Point Wednesday morning during a deadly shootout between the federal police and alleged drug traffickers.

At least five people were killed during the hours-long firefight near the Bella Sirena complex that witnesses say included gunfire from military helicopters at one of the resort areas popular with Tucsonans.

The shootout was part of a federal police operation, but in a news conference Sonora State Attorney General Carlos Navarro Sugich couldn’t say whom it involved.

Two people died when a vehicle crashed into a block post on a traffic circle and burst into flames, Navarro Sugich said. Two others were killed during the operation outside a hotel in the tourist area of the city. State police officials haven’t released their names or details on how the fifth person died.

Mexican newspapers, including El Debate, reported that one of the men killed was Gonzalo Inzunza Inzunza. Also known as “El Macho Prieto,” Inzunza is a top boss in the Sinaloa drug cartel.

Calls to the Sonora State Attorney General’s office to independently confirm this information were not returned before the Star’s deadline. The Immigration and Customs Enforcement and Drug Enforcement Administration offices in Arizona directed all calls to their headquarters.

“Macho Prieto” is the plaza boss for that whole desert area, said Anthony Coulson, who headed the U.S. Drug Enforcement Administration’s Tucson office until retiring in 2010.

If he was the person targeted by Mexican authorities, Coulson said it had to be a well-organized effort. And, he noted, the apparent use of the Mexican navy indicates U.S. government involvement.

If Inzunza was killed during the operation, Coulson doesn’t expect to see a fight for power because everything is well controlled by nation’s most-wanted drug lord, Joaquin “El Chapo” Guzman, he said.

At one point, Coulson said, Inzunza was causing problems for Rocky Point tourists — including robberies and at least one incident of rape, prompting Guzman to send people to tell him to calm down.

An American who moved into Bella Sirena, a luxury residential resort, six months ago said there were between 100 and 200 officers in the area, not including those shooting from two helicopters.

The woman asked not to be identified because she feared for her family’s safety.

She said they awoke about 5:15 a.m. to what they initially thought was fireworks. She and her husband ran out to the balcony and heard yelling. That’s when they realized it was gunfire coming from the road and from one of the villas near the swimming pool below.

“We could see cars at our gate get shot and people shooting out of them,” she said in a telephone interview from her condo. She saw gunmen shooting from a minivan with what appeared to be machine guns.

“It was like in the movies,” she said. “I don’t know how else to explain it.”

The U.S. Consulate in Nogales immediately sent out a message on Twitter to alert U.S. citizens in the area of the gunbattle, urging them to take shelter immediately and stay clear of doors and windows.

Stephen Heisler, who lives in the Esmeralda Resort complex on Sandy Beach, said he awoke to the sound of gunfire and quickly grabbed his 6-year-old son and 8-year-old daughter from their bedrooms, closed all doors and windows and took cover in the master bedroom.

“It sounded like we were under attack. We didn’t know what was going on,” he said in a telephone interview from Puerto Peñasco.

“Whoever they were going after must have had a tremendous amount of power. ... To actually see a helicopter gunship firing into a dense residential area will haunt many for a very long time.”

Heisler said his family has lived in Rocky Point near the complex where the shootout happened since 2012, and plans to stay.

He thinks the operation was part of some housecleaning the new administration is doing and this was an isolated incident.

Fears about security in Rocky Point surged in 2009 and 2010, as general concern about drug-war violence in Mexico hit home with a few incidents in the beach town , including a gunbattle in broad daylight near Rocky Point’s recreational sports complex.

But the violence seemed to have calmed down in the last couple of years and tourism had started to rebound.

Earlier this year, the U.S. State Department lifted a travel warning for Rocky Point, recommending only that U.S. citizens use the Lukeville border crossing in order to limit driving through Mexico.

“Americans here are treated very well,” Heisler said. “We are part of the community.”

Pima County Administrator Chuck Huckelberry, who has owned a home in Rocky Point for a number of years, wasn’t fazed by the gunbattle.

A demanding schedule has led to fewer visits to his home in Mexico, but Huckelberry said he still feels safe visiting Rocky Point over the holidays with his family.

The mayor of Puerto Peñasco, Gerardo Figueroa, said Wednesday that the town was calm after the incident. He added that with the combined police work of federal, state and city officers that “things are under control.”

Figueroa said that a thing like this had not happened in over a year and that is why the violent outcome looked spectacular and attracted a lot of attention.

Still, the mayor said that the operation was needed. The city has added officers who will patrol the area for added safety and he said tourists should not be wary about their safety or of visiting the popular resort town.

“Visitors should be calm since it was an operation done by federal forces to find people involved in organized crime who resisted arrest,” Figueroa said.

Bob Feinman, a Tucson resident who is head of Narpan Consulting, which does some promotional work for Puerto Peñasco, and is a frequent visitor, said that he agreed with the mayor of Rocky Point and that the shooting was a tragedy.

However, he added during an interview that the incident should be seen objectively like a similar shooting at Los Angeles International Airport, which was a tragedy, but “people were not afraid at the airport; why would they be afraid of anything else after what happened at Rocky Point? I am just trying to be objective and level the playing field.”

Contact Perla Trevizo at ptrevizo@azstarnet.com or 520-573-4213. Reporter Joe Ferguson contributed to this story.

The State Department warns against nonessential travel to the eastern edge of the state of Sonora and within the city of Ciudad Obregon and southward, with the exception of travel to Alamos. People are urged to travel only during daylight hours and use only the Highway 15 toll road, or "cuota," and Sonora State Road 162. Travelers throughout Sonora are encouraged to limit travel to main roads during daylight hours.

At least five people were killed in a shootout involving federal police and military officials near Rocky Point's Sandy Beach area on Dec. 18,…

In this photo, which was provided by a witness, Mexican soldiers can be seen moving through a condominium complex near Sandy Beach in Rocky Point, Sonora, a beach town popular with Tucsonans. Mexican newspapers reported that a top boss in the Sinaloa drug cartel, Gonzalo Inzunza Inzunza, also known as “El Macho Prieto” was killed.

A burned-out vehicle outside the Las Palmas development in Rocky Point in which two people were reported to have died on Wednesday.